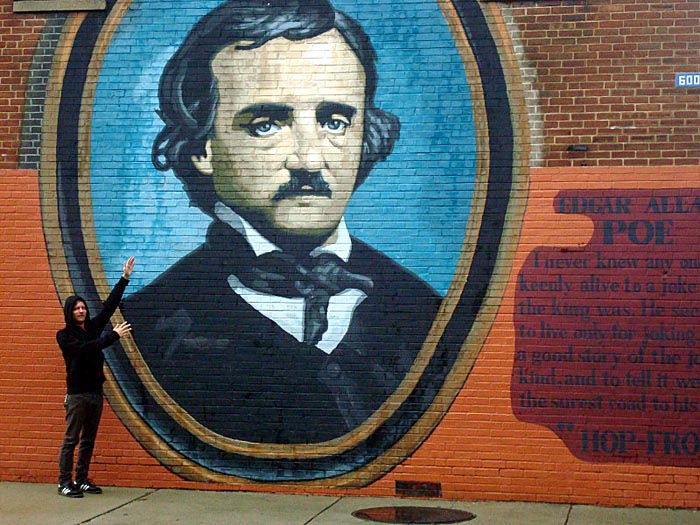 Edgar Allan Poe, whom you surely know from such works as “Your High School English Class,” was perhaps America’s first tortured artist. He was kind of a miserable S.O.B. but left behind a vast collection of influential poetry.

Poe lived for several years in Philadelphia, and one of his houses has been preserved as the Edgar Allan Poe National Historic Site. This is an easy attraction to overlook when you’re in Philly, because you’ll certainly be checking out the Liberty Bell and the Ben Franklin-related attractions too. But don’t forget about old Eddy!

I originally wrote this post about the giant Edgar Allan Poe mural on the side of the building. But it’s worth focusing on the National Historic Site itself, since that will hold more interest for Poe enthusiasts.

The Poe site has extremely limited hours. As of 2019, it’s only open on Friday, Saturday and Sunday from 9 am to 5 pm each day. And it actually closes between noon and 1 pm for a lunch break.

So if you’re not in town on the weekend, you’ll miss out on going inside (though you can still view the exterior of the place.) The site is a full mile from Independence Hall and the other historic tourist attractions.

What will you see at the Poe site? Start with Poe’s actual house. The unfurnished home where he lived is on display. This is the only one of the five houses where Poe lived that has survived.

Poe lived in the home for a year and used to entertain fellow authors. But he wasn’t yet successful, and had actually filed for bankruptcy. So the house did not have a lot of grand furniture.

The house did have the word “death” carved into the wall above the kitchen. How classy! It’s unknown whether Poe did that himself or if it happened later. The home had no electricity or running water. We often forget that those ultra-famous people of the past didn’t have these modern creature comforts.

READ NEXT
Quirky Attraction: The Salvador Dali Museum in Paris

Poe had a small writing room that he worked in. He may have slept there too, since his wife had tuberculosis at the time, which would have been contagious. He wrote and published the story “The Black Cat” while he lived here.

The Reading Room in the adjacent house sometimes holds readings of Poe’s works. You can request a guided tour of the Poe National Historic Site, or you can wander around on your own.

As noted earlier, the Poe mural can be found up the street from the Historic Site, at N. 7th and Spring Streets. It’s a very cool thing to see on the corner of the street. It’s located near a housing project and is most definitely “off the beaten path,” if that sort of thing bothers you. It’s not everyday you see a giant mural of a weird-looking dude with a silly moustache on an inner city wall!

Oh, and the house has a raven outside, in honor of his poem “The Raven.” Poe fans will want to check this place out! 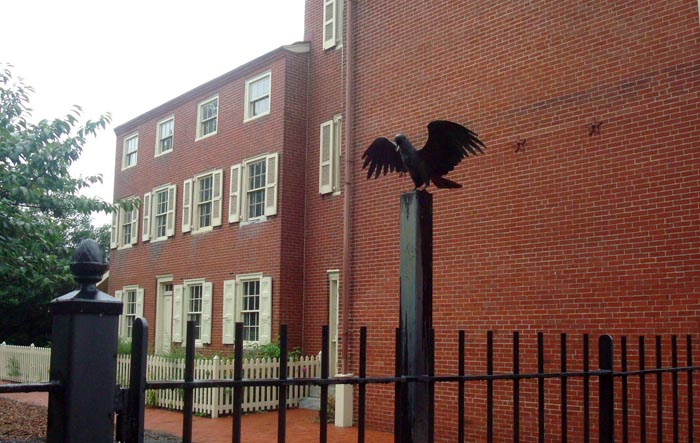 While you’re in Philly, don’t forget to check out Philadelphia Magic Gardens, the Rocky statue, and the elevator to the top of City Hall!