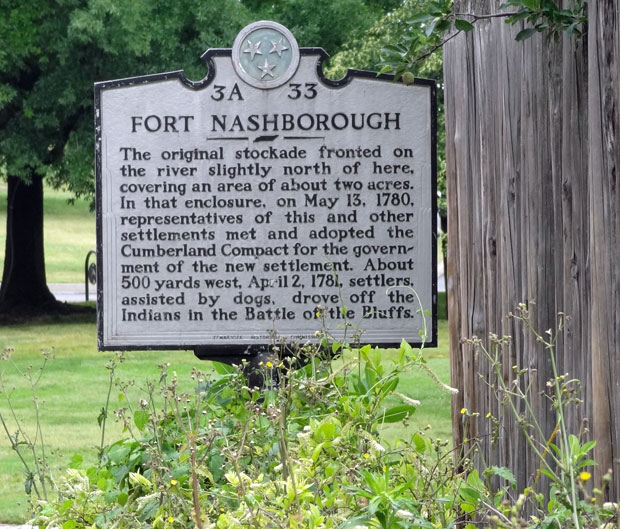 In downtown Nashville, not far from a stretch of honky tonk bars, sits a replica of the fort that established Nashville. A group of pioneers settled here along the river on January 1, 1780. (Kudos to them for working on the holiday – I hear they didn’t even ask for time-and-a-half.)

Fort Nashborough as it exists today is not the original settlement, but rather a reconstruction. So the fort serves more as a history lesson than a true authentic experience. 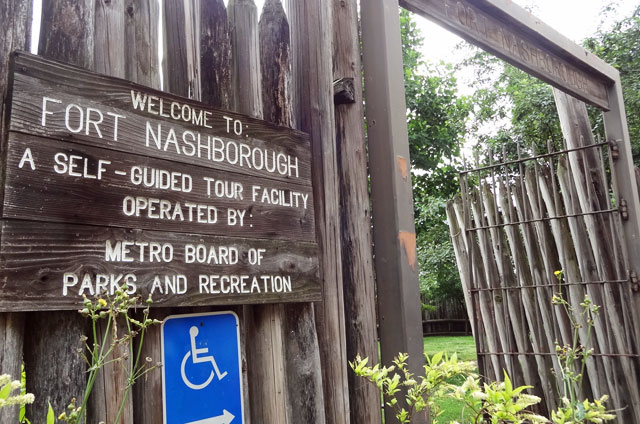 It’s free to walk through the grounds for self-guided tours. Signs give visitors an idea of what it was like to live in early Nashville.

The site was actually used to house settlers during a period of Native American battles. The natives, seeing the American Revolution as an opportunity to fight back against the white man, launched regular attacks against the colonists.

One such attack in 1781 was called “Battle of the Bluffs.” A group of Native Americans led by a fellow known as Dragging Canoe managed to lure the American soldiers away from the fort, then cut them off from returning.

The settlers managed to get back inside, but lost their horses in the process. Attacks continued for 14 years.

Four log cabins sit on the grounds. Signs explain that the original settlement was 247 feet by 123 feet, four times the size of the replica, and featured cabins for family living and blockade houses around the perimeter used for defense.

The early settlers especially enjoyed their view of the hundred-million dollar stadium across the river used to play football, which hadn’t been invented yet. 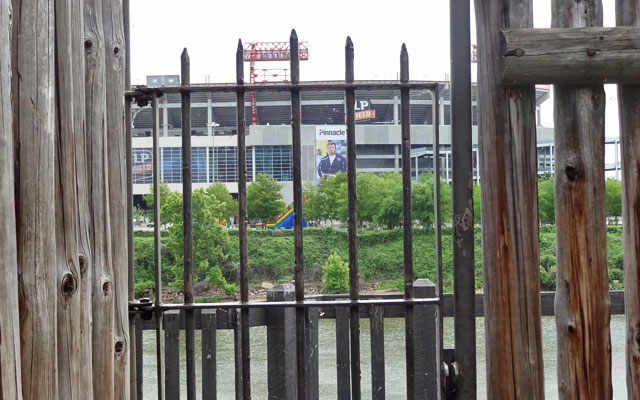 Fort Nashborough was essentially the place where Nashville was founded. James Robertson led the group of pioneers across the frozen Cumberland River to this place, then called The Cedar Bluffs.

Those interested in history and early settlements might find Fort Nashborough worth visiting. It’s not necessarily worth going out of your way for, but you’ll be in the area anyway because of those cowboy bars, so…

Note that the Fort Nashborough I saw is different than the one which stands today. This site has been changed and updated a few times over the years. The fort I saw was not maintained, and was eventually closed to the public and demolished.

But don’t fear, another has come to take its place! A new fort replica opened in 2017 and is designed to give visitors better insight into how the settlers lived at the fort.

The site is now officially known as the Fort Nashborough Interpretive Center. It features all-new cabins that more accurately depict the original design of the fort.

While you’re in Nashville, make sure to visit some of the other famous and quirky attractions, such as the Parthenon, the Music City Walk of Fame, RCA Studio B, and the Andrew Jackson Hermitage Mansion.

And if you enjoy road trips, take the Nashville to New Orleans drive to see lots of fun attractions.