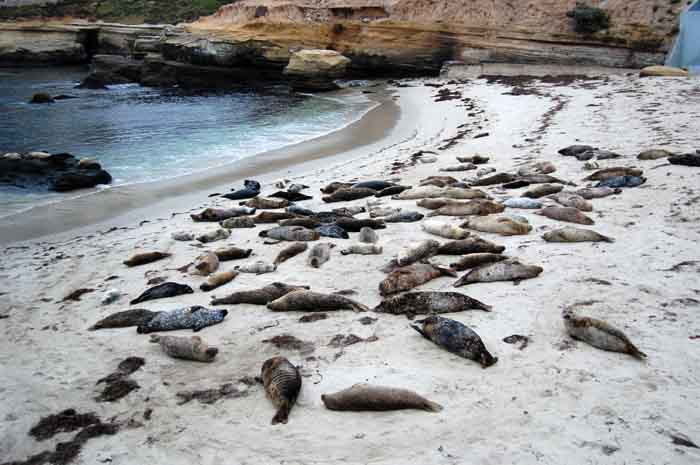 La Jolla, California has some nice stretches of beach along the Pacific Ocean. One particular cove was so pretty and isolated they decided to turn it into a Children’s Pool some years back. But the harbor seals weren’t down with that, and they gradually took over, booting the kids out.

A couple hundred seals and sea lions now hang out here, and people come all day long to take pictures of them. For midwesterners like me, who have never seen seals in the wild, it’s a cool thrill to check them out up close, even if they don’t do much but lay there, or occasionally waddle into the water. 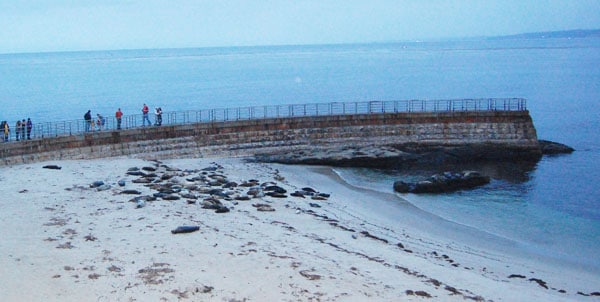 There’s been a lot of legal wrangling in recent years, as some folks attempted to have the seals removed so humans could return to the beach, but it now seems that the seals have won the legal right to stay. Score one for the aquatic mammal community! And go check them out for yourself!

La Jolla Cove Map – Where to See the Seals

Children’s Pool Beach and La Jolla Cove are both good spots to see the seals and sea lions. You may have to park on Coast Boulevard and walk over since there isn’t a ton of parking in La Jolla, a small residential beach community.

These two spots are easily walkable. It’s about a 10-minute trek (0.5 miles) from one to the other, and it’s a pleasant walk. The seals are usually in this area all day, from early morning to later at night. There is not necessarily a “best time” to see them.

Note that Children’s Pool Beach is closed to the public between December 15 and May 15 every year. That measure was taken to protect seal pups, who are born during this time. You can still come by and view them from a distance, however. La Jolla Cove, meanwhile, is open year-round.

Does La Jolla Have Seals or Sea Lions?

You may see references to the La Jolla Sea Lions, rather than seals. The truth is that both are present here! How can you tell them apart? The easiest difference: Sea lions have external ears that are clearly visible, while seals do not.

Both of these animals can be cute to see in the cover, but keep your distance. As these signs indicate, seals and sea lions can be dangerous. They will not hesitate to bite people who try to come close. So just watch from afar.

La Jolla is actually not its own city – it’s a part of San Diego. While you’re visiting La Jolla, head down to central San Diego to see the Kissing Sailor statue and the San Diego Zoo!