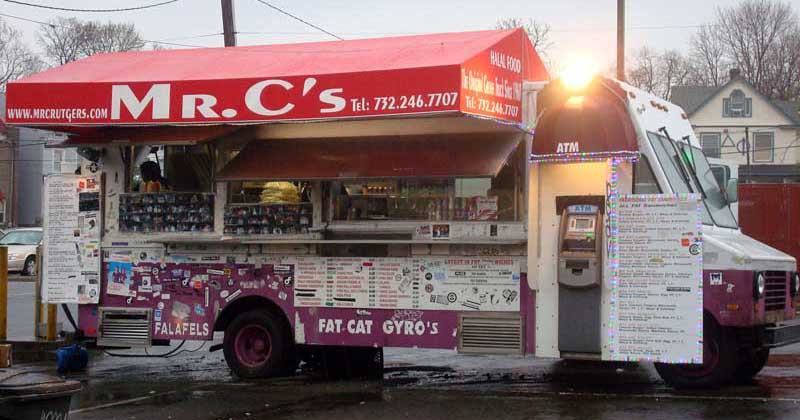 As I discovered during a visit to Rutgers University a few years back, the place to stuff your face in town is the collection of campus “grease trucks” that serve “Fat sandwiches” – various types of sandwich loaded with all sorts of greasy goodies guaranteed to clog your arteries.

Yes, it’s hideous and unhealthy, but how can you not partake in the local delicacy? Adam from Man vs. Food, one of my favorite shows, even filmed part of an episode here.

The Fat Koko and the Fat Moon tempted me, but I went with the Fat Darrell – chicken fingers, mozzarella sticks, french fries and marinara sauce piled onto a roll. I actually thought it would be way more greasy than it was. I was expecting something similar to the Italian beef sandwich in Chicago, where you can barely hold it because the bread is sopping wet. 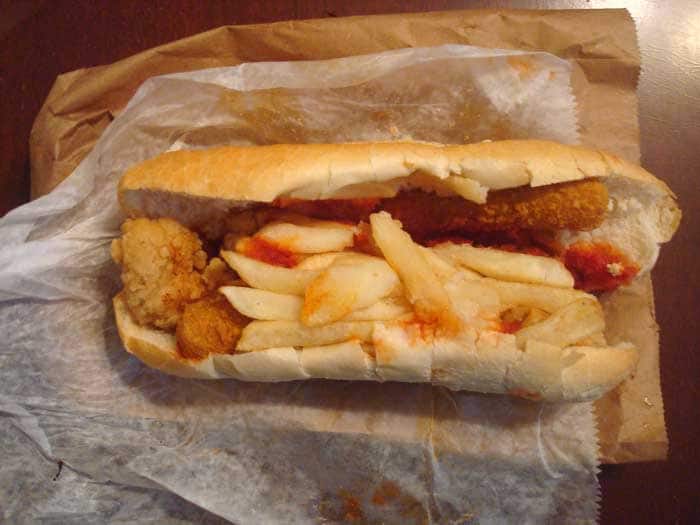 Kind of a letdown, right? It’s not the most visually appealing thing I’ve ever seen. And a little more marinara would’ve been nice. The cheese sticks were the best part. If I had to do it again? I’d replace the fries with onion rings. And add bacon. Oh yeah…

The Rutgers grease trucks all serve basically the same menu items, and the sandwiches start at around $6. You can also order a salad or grilled chicken, if you’re insane and want to try a “healthy” item from a “grease truck.”

There’s very little seating around the grease trucks, so be prepared to take your grub back home or just sit in the grass somewhere nearby. Parking is metered street parking. They apparently stay open really late but don’t have set hours. I guess when the customers are gone, they shut down for the day.

Here’s a longer list of available Fat sandwiches from one truck. Which one would you order? 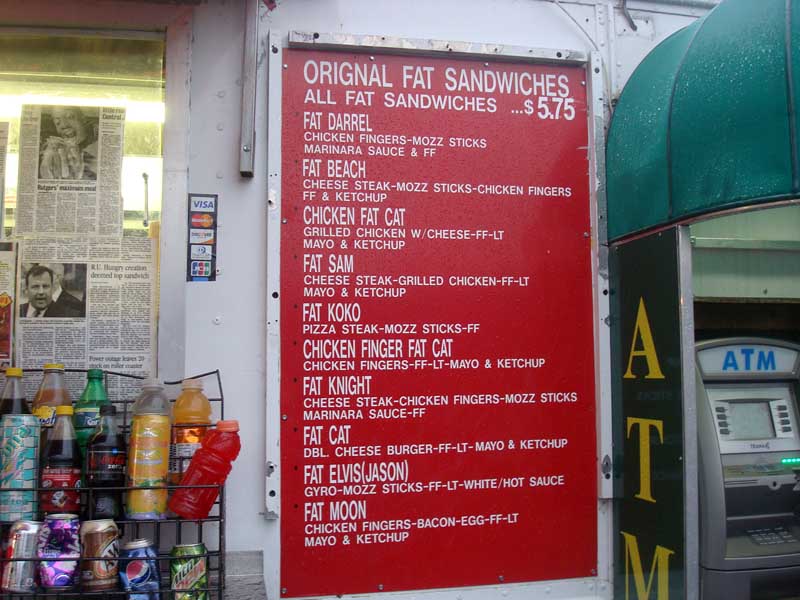 Update: The grease trucks have been removed from Lot 8 on campus

In 2013, the grease trucks were removed from College Avenue after years of serving up fat sandwiches to university kids.

Why did they leave? New construction, of course. A 16-story dorm building went up in the old lot. Sigh.

Where have all the Rutgers grease trucks gone? Some moved elsewhere on campus or to other places around the city. Some of the trucks went away for good. Fat Darrell created his own website and is still pimping his famous brand. The R U Hungry brand has a store on Hamilton Street.

Rutgers gave many of the trucks new places on campus, but they decreed that no more than two trucks could be clustered together. So there will never again be the same massive food truck center that once existed. The trucks are a part of history.

VIDEO: The Rutgers grease trucks on Man vs. Food