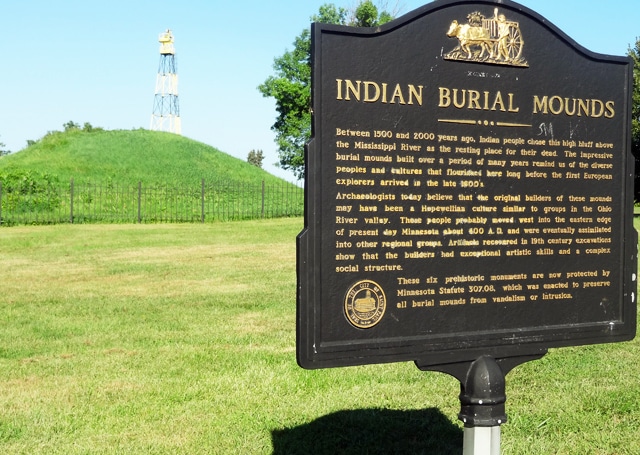 Around 2,000 years ago, members of the Hopewell Native American tribe buried their dead in a series of mounds atop a hill in what is now St. Paul, Minnesota. Later, the Dakota tribe used the site for the same purpose.

Today, there are six burial mounds in what has become Indian Mounds Regional Park. There were once 16 mounds there, but most were destroyed over time. The park now contains six mounds that visitors can see. Out of respect, the Indian burial graves are behind fences to preserve them.

This hillside features limestone and sandstone bluffs that are 450 million years old. Around 16 former mounds once existed on top of the bluff, while another 19 were lower on the bluff near Wakan Tipi, or Carver’s Cave.

When the mounds were excavated, researchers discovered log tombs, pit burials, beer teeth, copper sheets and ornaments, and even a clay mask over a skull that perfectly replicated the person’s face. That mask remains mysterious, since nothing similar has ever been found at mounds or graves elsewhere.

It is believed that the mounds were created between 1500 and 2000 years ago. They contained various types of burials, including log tombs, pit burials, and stone cists.

The Skyline View From the Mounds

A lot of American cities have Indian burial ground areas. One of the things that’s special about the St. Paul park is that it overlooks the downtown skyline and the Mississippi River, making it one of the most scenic spots in the Twin Cities.

Many visitors to the park come not for the burial mounds but for the views, or simply to enjoy a quiet walk in a green space. 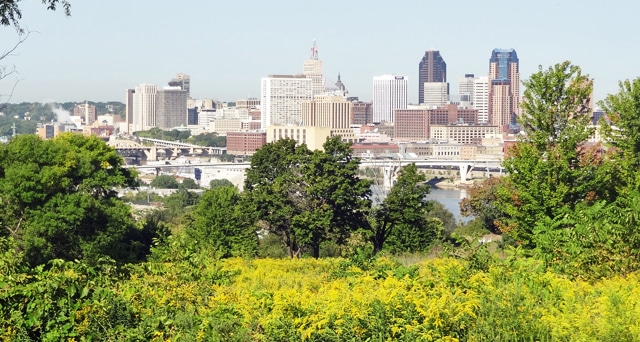 This is not a large park, but there is a small shelter and a large shelter for group gatherings. There are additional picnic tables, playground equipment, a baseball field, and a tennis court. The park has two parking areas, so it’s easy to make a quick visit.

Aside from the mounds and the views, the most interesting thing about the area is the collection of trees. More than 28 different varieties of tree have been planted here, including Crabapple, Horse Chestnut, White Pine, Red Oak, Blue Spruce, Ginkgo, Princeton Elm, Norway Maple, and Northern Catalpa. See a map of the tree locations here.

While you’re in the Twin Cities, make sure to also stop by the Minneapolis Skyway, the beaches of Minneapolis, and the Cherry Spoon sculpture.

And for more Native American history, check out my visit to the Blackfeet reservation in Montana.

Have you ever visited a burial ground?