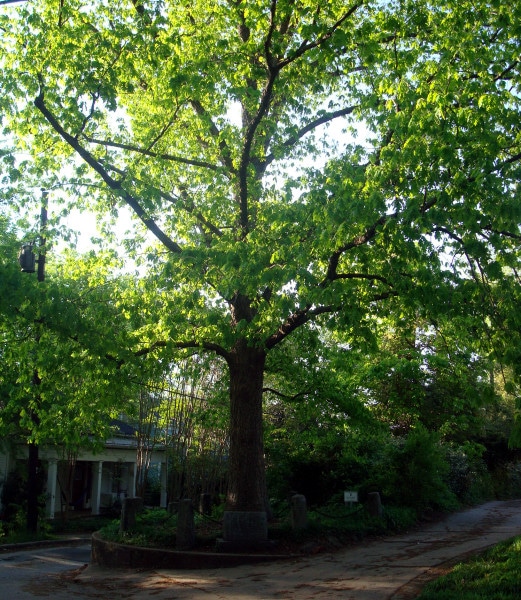 I feel like I’ve been writing about a lot of normal places lately. So it’s time for a new regular feature introducing some of the quirkiest attractions I’ve ever encountered.

Edition #1 focuses on The Tree That Owns Itself. Yes, it’s just as bizarre as it sounds. The story apparently goes like this: In 1880, Colonel William H. Jackson decreed that a white oak on his property be deeded to itself, because he didn’t want it to be destroyed after he died. So he filed a legal document and now the tree legally owns itself and the land within the eight feet surrounding it.

That wouldn’t hold up in a court of law, but local folks recognize the deed and local authorities look after the tree. The original tree fell in 1942, but a new one was planted from one of its acorns. Now, it’s a large, thriving tree in the middle of a residential street.

Visiting the Tree That Owns Itself in Athens

If you’d like to see the Tree that Owns Itself, head to the intersection of Finley and Dearing Streets in Athens. You’ll find the tree, along with a stone marker with a quote from Jackson explaining the history of the site. 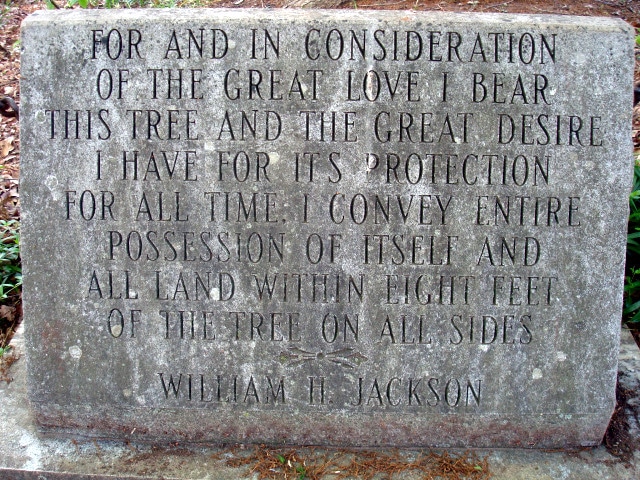 The tree has been featured in Ripley’s Believe it or Not on multiple occasions over the years. It ranks as one of Georgia’s most unique attractions, even if it might not have the national cachet of places like the Georgia Aquarium and Coca Cola Museum.

Athens, Georgia tourism has its own page dedicated to the tree, which proudly notes, “Its property rights have never been questioned.” This is one of the wackier quirky roadside attractions I’ve come across. Aside from the tree and the stone, there’s not much to see here, so you won’t need more than a few minutes at the site.

The Tree That Owns Itself is part of the Dearing Street Historic District, which is listed on the National Register of Historic Places.

Of course, the tree has its own Facebook page, where you can see images of the tree in various seasons, including its snow-covered winter view. If you ask me, that tree is a big publicity whore!

4 thoughts on “Quirky Attraction: The Tree That Owns Itself in Athens, Georgia”