The Hawaiian island of Oahu is known for its beaches, volcanic craters, and the Pearl Harbor historic site. But as awesome as those attractions are, they’re not the only reason to spend time on the island. Visitors who want to seek out something a bit more quirky can find an Elvis statue, a pineapple plantation, a museum dedicated to Polynesian football players, and Buddhist temples.

Several of these activities are free or low cost, so if you’re visiting Hawaii on a budget, they can easily fit into your itinerary.

Check out our guide to some of Oahu’s most offbeat attractions. If you’re from Oahu and have other quirky suggestions that we missed, leave us a comment!

Quirky Things To Do in Oahu: The Complete List! 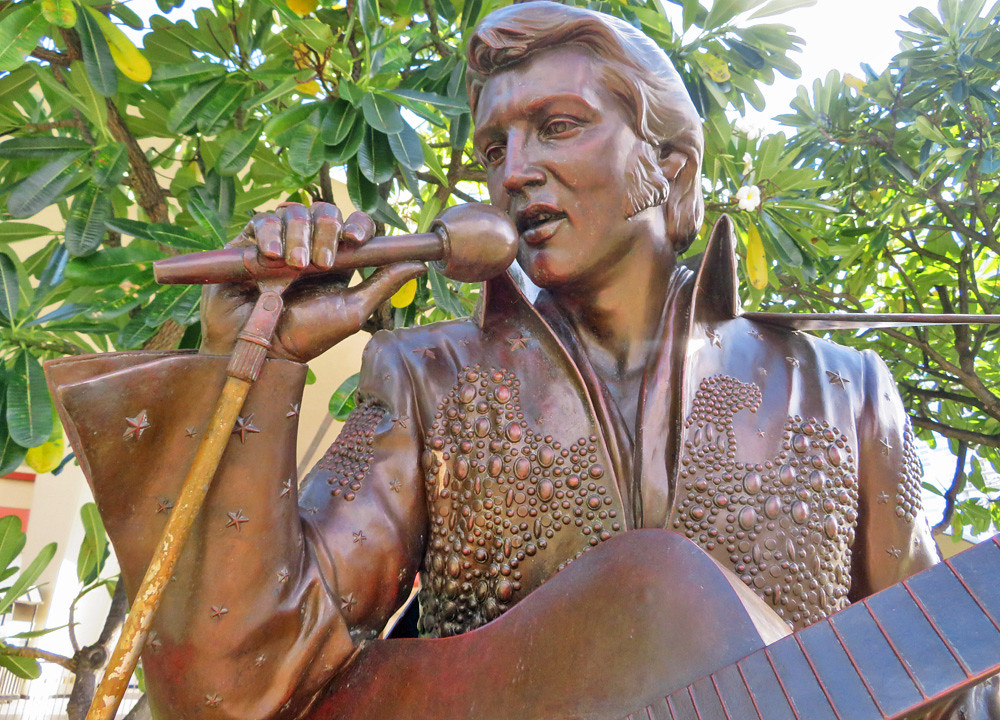 Elvis Presley was the star of the world’s first international satellite concert broadcast in 1973, called “Aloha From Hawaii.” More than a billion people tuned in to see the King’s performance at the Neal Blaisdell Center in Honolulu. Today, an intricately-detailed bronze statue of Elvis stands outside the venue. Visitors often toss a lei around the King’s neck. 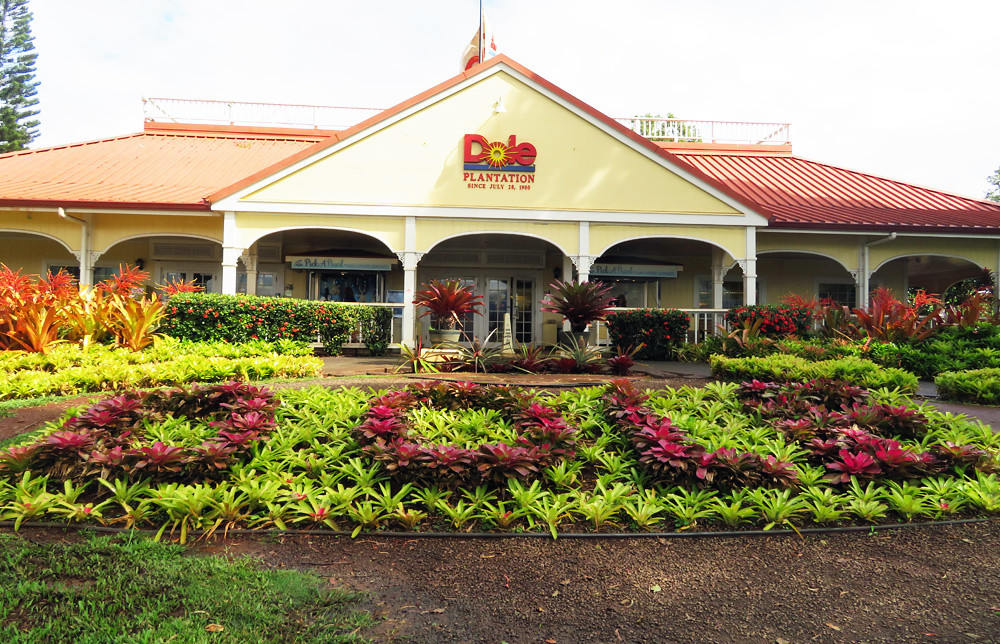 At one time, Hawaii produced around 80% of the world’s pineapples. That percentage has dropped quite a bit, but the Dole Plantation still grows pineapples and many other crops. It’s the second most popular tourist attraction in Hawaii, behind only Pearl Harbor.

Visitors can take a train tour of the grounds, enter the giant garden maze, or browse hundreds of oddball pineapple-flavored products (Popcorn! Pancake mix! Salad dressing!) in the gift shop. 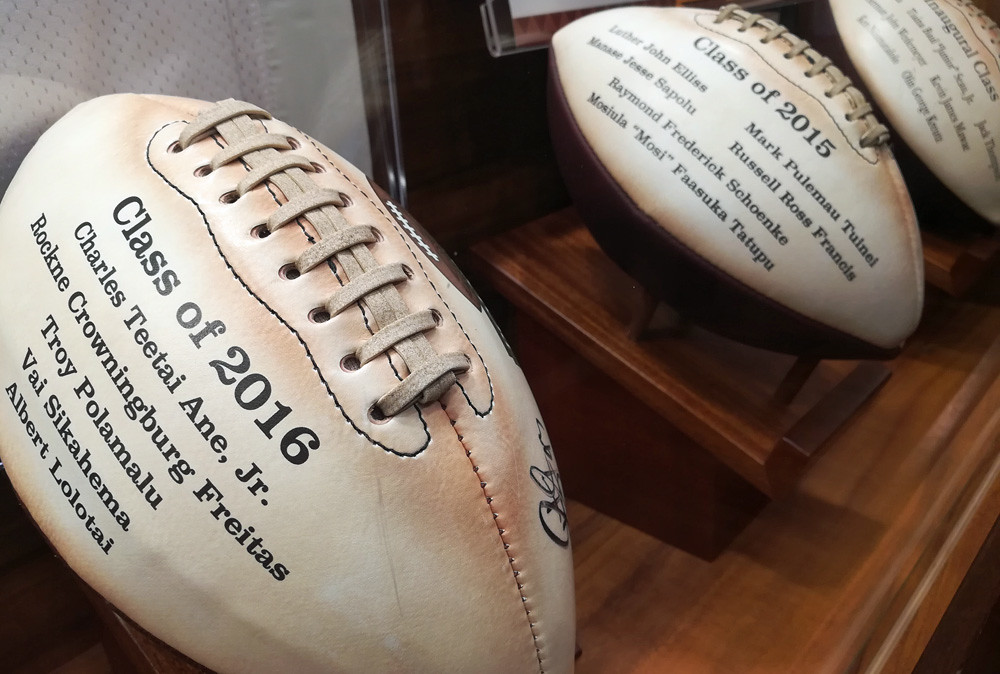 Learn about the lives and careers of honorees like Junior Seau, Troy Polamalu, and Kevin Mawae at the Polynesian Football Hall of Fame.

See photos, videos, and memorabilia from these and many other former NFL players in this small facility, which opened in 2013 as part of the Polynesian Cultural Center in Laie. The Hall continues to grow as several new players earn induction each year. 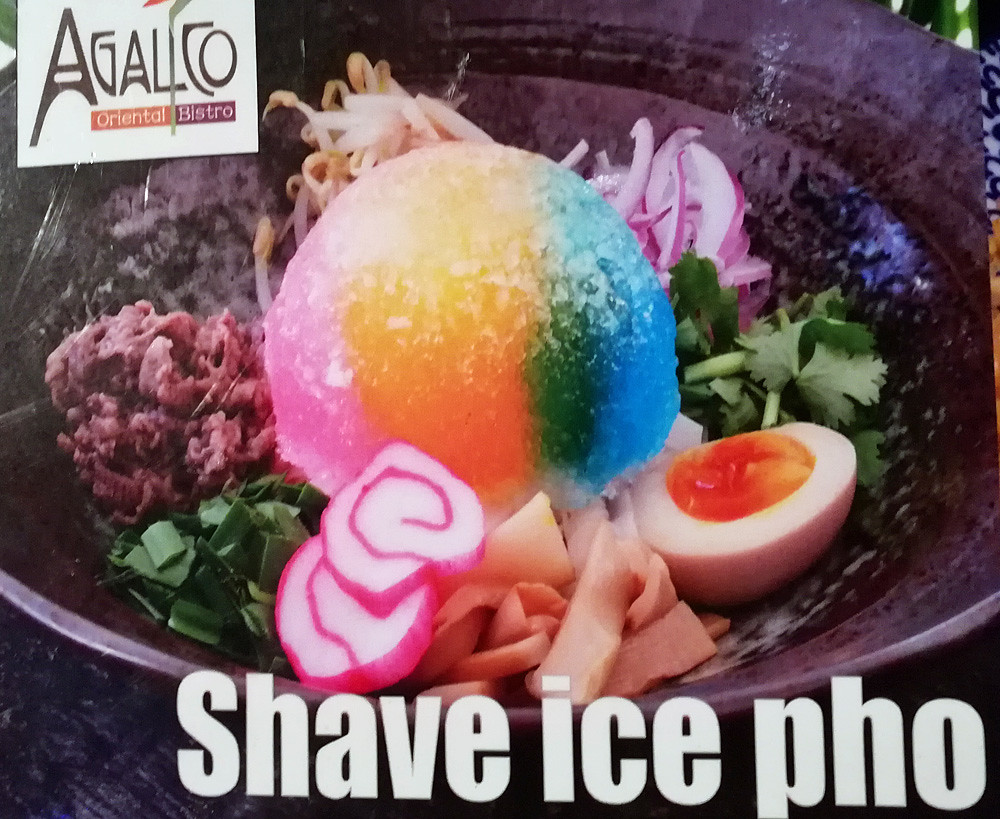 Pho is the popular Vietnamese noodle dish that takes its flavor from the choice of meat used. People have been known to add many different kinds of garnishes to pho, but only in Hawaii can you find “shave ice pho,” which adds a cold slab a rainbow ice to the savory dish.

I can’t imagine this tastes good, but if you’re daring enough, you can find it at the Agalico Waikiki restaurant. 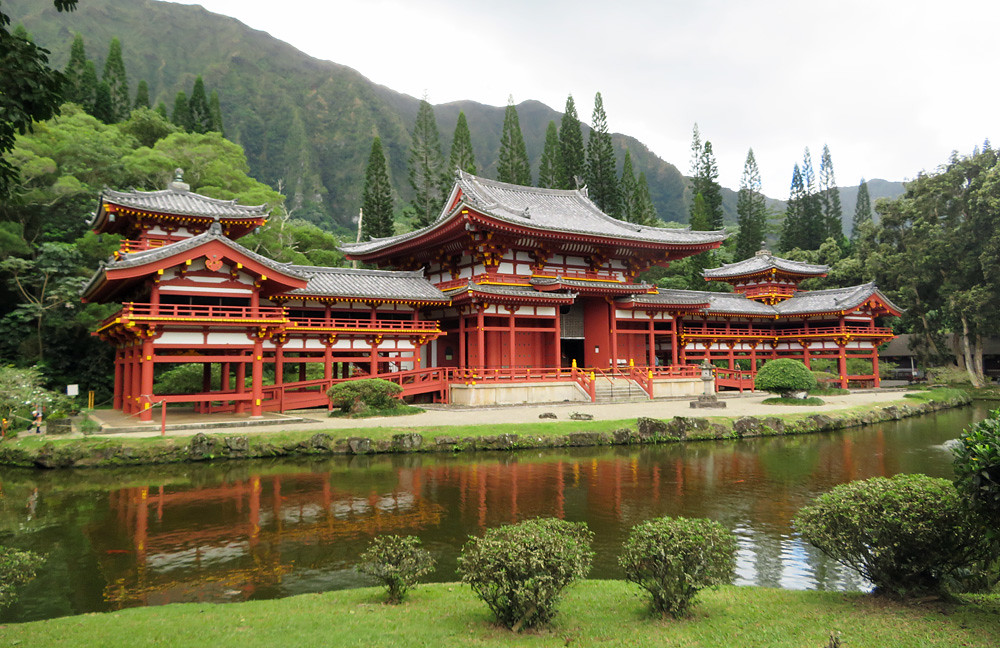 Constructed in 1968 in honor of the 100-year anniversary of the first Japanese immigrants coming to Hawaii, the Byodo-In Temple is a surprising find on the eastern side of Oahu.

The grounds of the “non-denominational Buddhist temple” feature the main temple with a 9-foot Amida golden Buddha statue, meditation pavilions, koi ponds, and a 3-ton sacred bon-sho bell. The temple looks gorgeous in its location at the foot of the Ko’olau Mountains.

Hiking More Than a Mile Straight Up (Honolulu) 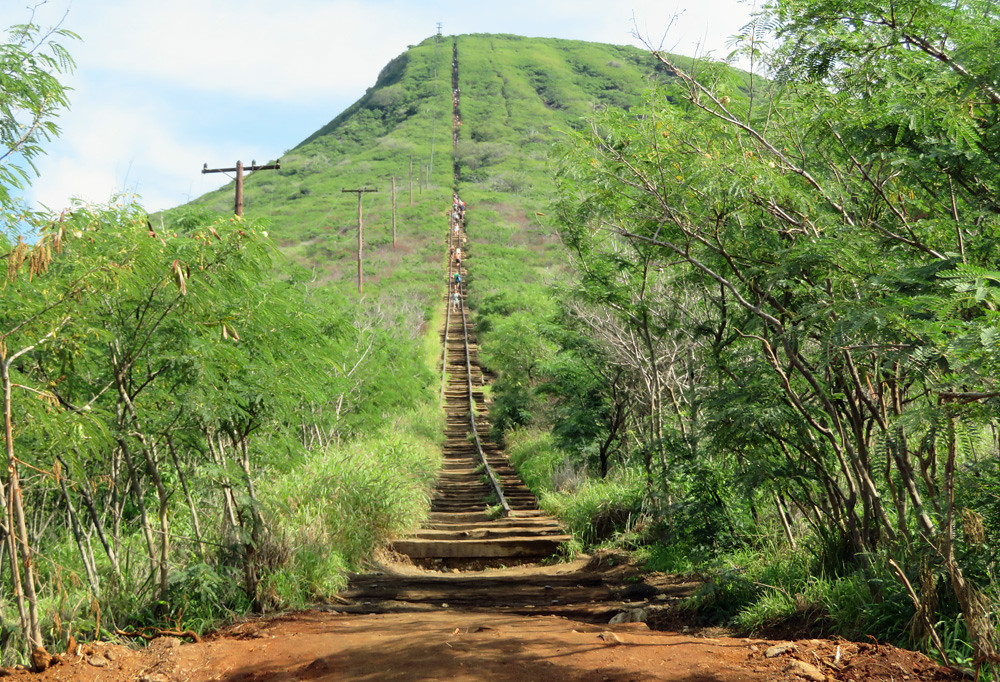 Hiking is one of the most fun things to do in Oahu, and Koko Crater might be one of the weirdest hikes. That’s because the entire hike on the Koko Head Stairs, as they are also known, consists of more than 1000 steps straight up.

You’ll walk across wooden steps held down with railroad ties to reach the top. The views are awesome, but be prepared for the exhausting climb up, bring plenty of water, and avoid hiking during the hottest hours of the day!

If you’d rather experience something more scenic, consider instead one of these waterfall hikes on Oahu! 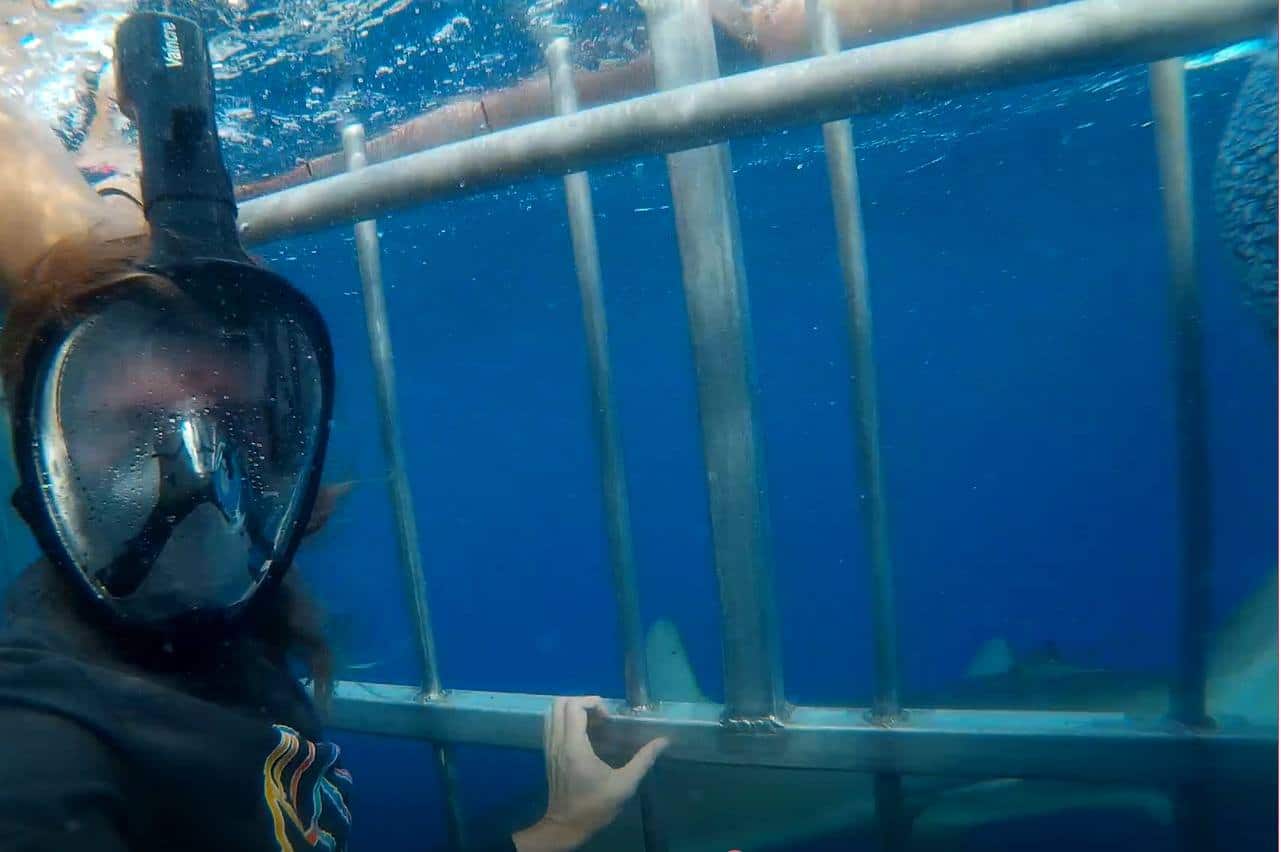 Being in the ocean just a few feet away from several large sharks is not an everyday experience. You can have your own shark cage diving experience on the northern side of Oahu. You’ll be separated from the Galapagos sharks by a steel cage, so you can snap underwater shark selfies without having to worry about becoming a shark’s dinner.

Things to See and Do in Hawaii Volcanoes National Park

2 thoughts on “Quirky Things to See and Do in Oahu”