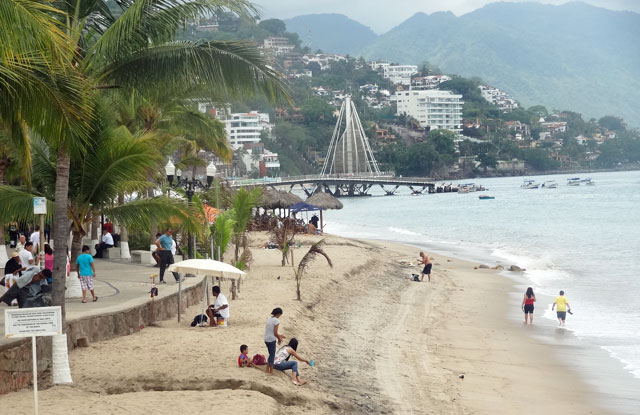 The quirky side of PV isn’t so obvious, but it’s my duty to uncover the hidden, unique side of town. These were the quirkiest sights and activities I found during my recent week-long visit to the awesome Mexican city.

Many of the activities mentioned in this article can be done on your own, but you can also book organized tours if you don’t want to deal with the hassle of haggling or negotiating. I always use GetYourGuide for tours around the world since they have the widest selection and lots of user reviews. See below for their top-rated Puerto Vallarta tours.

Quirky and Unique Things To See and Do in Puerto Vallarta, Mexico

The Puerto Vallarta sign is unique because each letter features art inspired by the work of famous local artist Manuel Lepe Macedo. In between the words is one of the city’s noted seahorse statues.

The giant letters spelling out Puerto Vallarta have been moved around the city a few times. As of this writing, they reside on the Malecon (boardwalk), just north of Isla Cuale. Google “Monumento El Caballito” to find it.

These letters were just erected within the past few years. You can’t visit PV without getting a selfie at this spot!

One of your best chances for quirky sights is Cuale River Island, a small isle just south of downtown surrounded by the two branches of the Cuale River. Check out the local merchant shops, parks, stray cats, street art, and unusual characters.

This staircase is a totally-Instagrammable sight. The old staircase on the island has concrete steps that are too close together to make for a comfortable commute.

So at some point, someone decided to build a new colorful staircase in the middle with steps that are more-accurately spaced-out for those who take normal-sized steps. 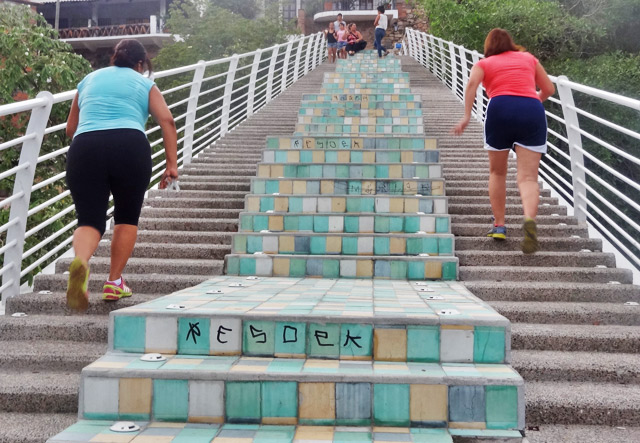 Don’t miss this staircase! It’s kind of a secret thing that some tourists never see since they don’t venture over this way. Cuale River Island isn’t necessarily considered a non-touristy place to visit, but you will definitely find fewer tourists here than on the Malecon boardwalk.

You never know who will be hanging around the island. On this day, it was a gentleman with a burro. I think he was offering rides. Or maybe just photos. Either way, he was getting his paper. 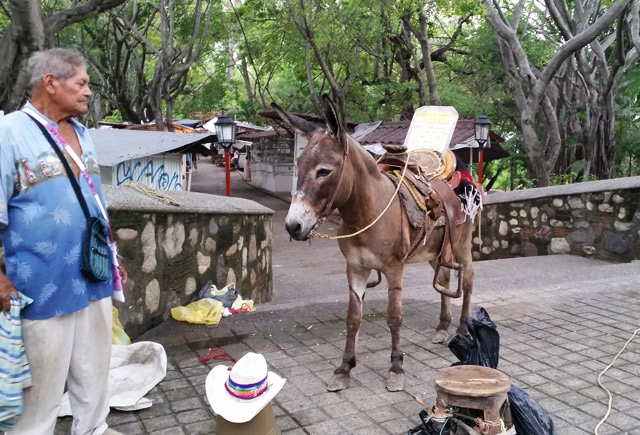 Cuale River Island is also a place to see the rubber trees, which are endemic to Mexico’s southwest. These trees grow long, rubbery strings that hang down from the branches. The tree can be a great source of latex, but here on the little island, they are primarily ornamental. 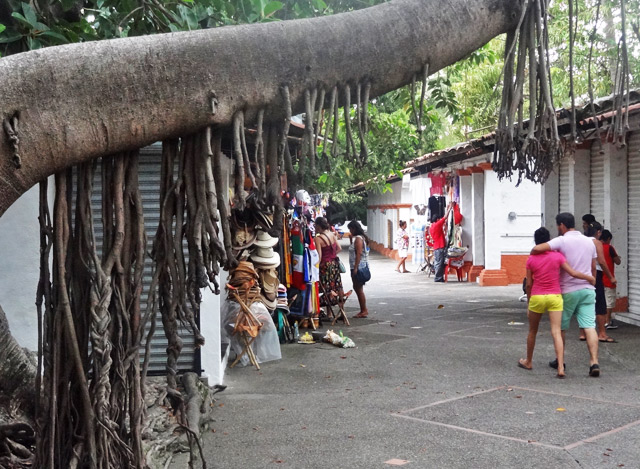 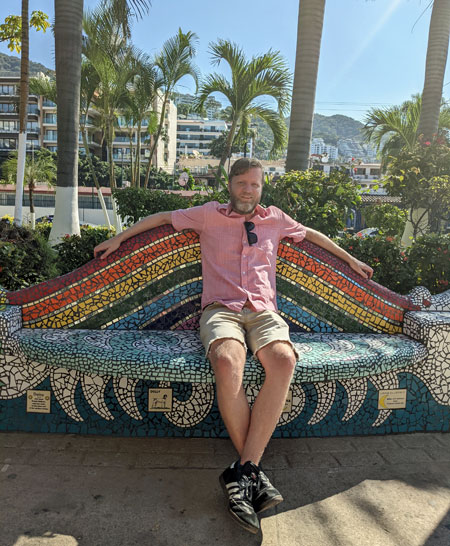 This small parklet in Zona Romantica has some colorful benches, like this rainbow seat. It also has some unusual artwork, like a large statue of a boy and a burro.

Here’s a second colorful staircase worth finding. This one is at Casa Maria Hotel in Zona Romantica. Another cool photo op! 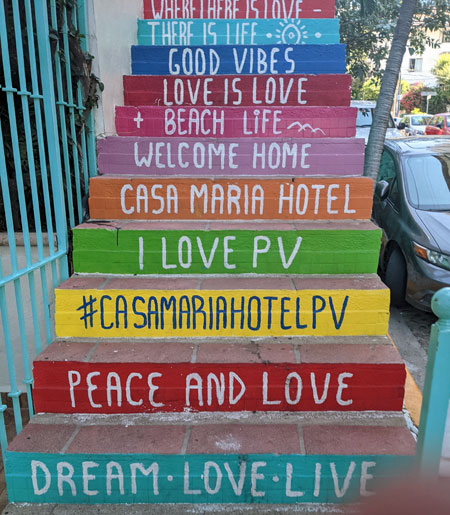 Oddly enough, the spirit of Elizabeth Taylor looms large over Puerto Vallarta. She and her fifth husband, actor Richard Burton, were the Jay-Z & Beyonce power couple of their day. They visited PV in 1963 with director John Huston to film The Night of the Iguana and ended up buying a villa here known as Casa Kimberley.

Liz kept that property until the ’90s. Until a few years back, Casa Kimberley was a museum dedicated to the Taylor-Burton couple and their history in the area. Now, it’s been totally renovated and serves as an upscale guest house, with spa services and restaurants.

It’s one of the few historic spots in Puerto Vallarta. The “Lovers Arch” pink and white bridge connecting the house to Burton’s former house across the street is still there as well. 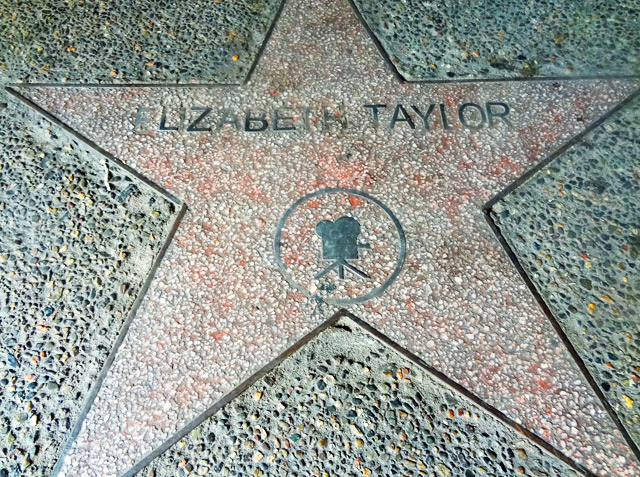 PV hasn’t forgotten Liz. There’s a star with her name in front of a restaurant on Olas Altas Street. I’ve never seen a Walk of Fame comprised of just one star, but who needs other stars when you have Liz?

A restaurant near Cuale River Island has a large white sculpture of Burton and Taylor. And on the island itself, there’s an old statue of Huston. 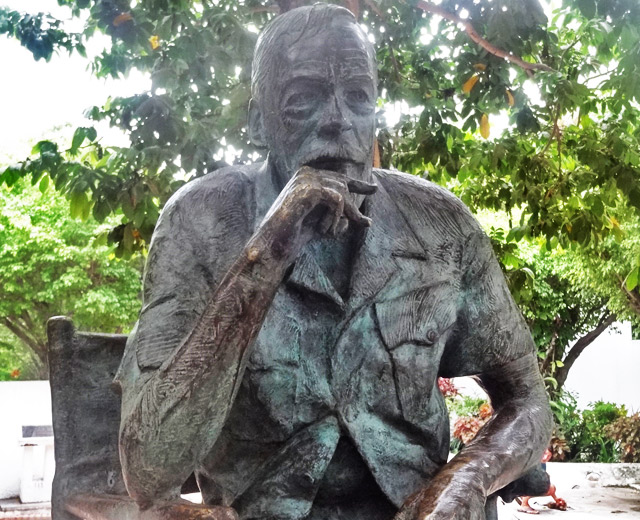 Go here to read more about the history of Elizabeth Taylor in Puerto Vallarta.

Situated on Banderas Bay, Puerto Vallarta has every kind of watersport you can imagine, including windsurfing, jet skiing, speedboating, and much more. Not to mention snorkeling at Los Arcos Marine Park.

That includes two of the newer and more adventuresome activities: Parasailing, which is basically hanging 50 feet in the air attached to a jet ski and parachute… 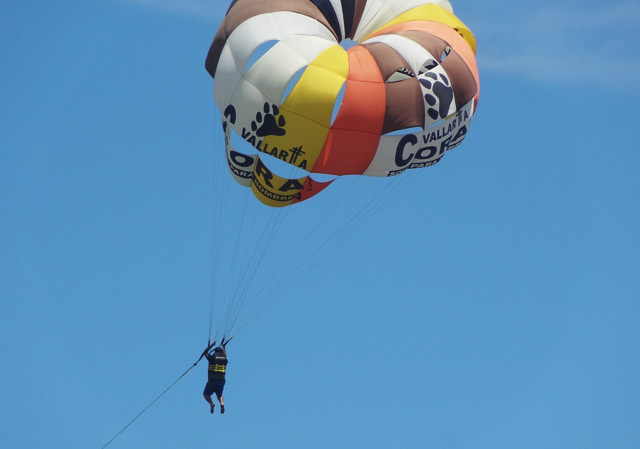 …and flyboarding, which is that water jet thing where you try to balance while water jets shoot out beneath your feet. I really have to try this someday. 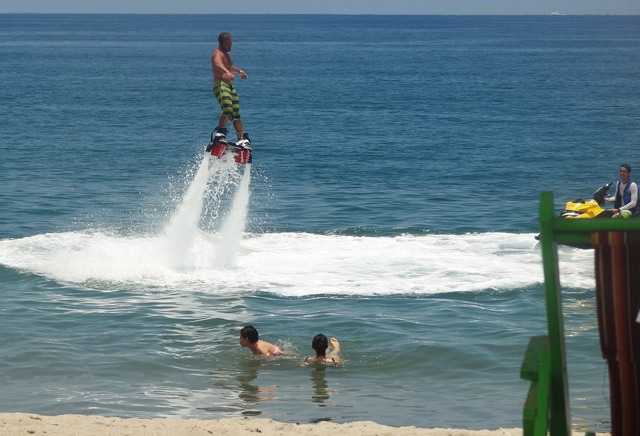 ATV rides and ziplining in the mountains

The mountains are only a 20-minute ride away from the heart of PV. They’re a perfect setting for an ATV ride or a ziplining excursion. I tried the ATV and took a joyride through the dirt roads and streams in the hills. It was so much fun! 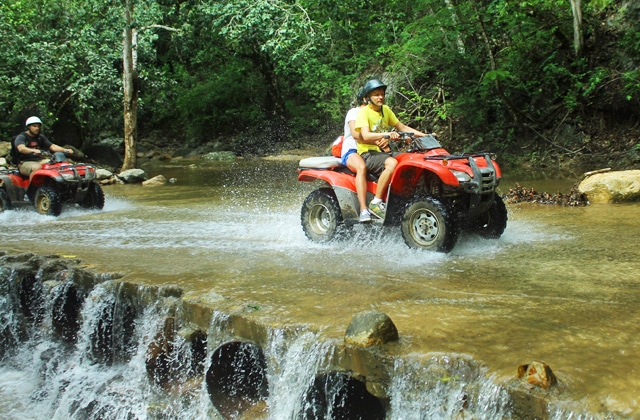 Ziplining through the forests is just as fun! You can take guided tours for either excursion. Here’s a combo tour that combines ATV riding with ziplining for a half-day of awesome adventure!

The seahorse statue is one of Puerto Vallarta’s most famous sights. There are actually two: One at the Malecon (boardwalk), and another at Los Muertos Beach.

The one at Los Muertos is the original, created in 1960. Twice, it washed away during strong storms but was later recovered. It has now been reinforced with iron bars to make sure it won’t run away yet again. 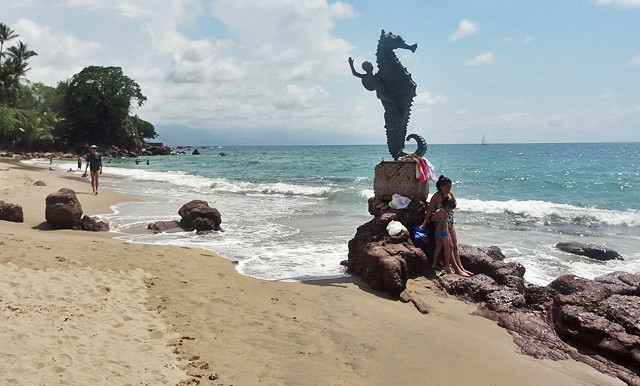 Depending on what beach you go to, you may find iguanas roaming around. These were a cool sight when our day cruise boat pulled up on shore. 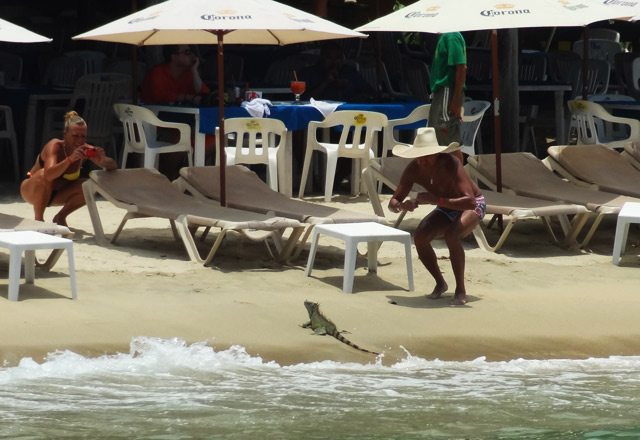 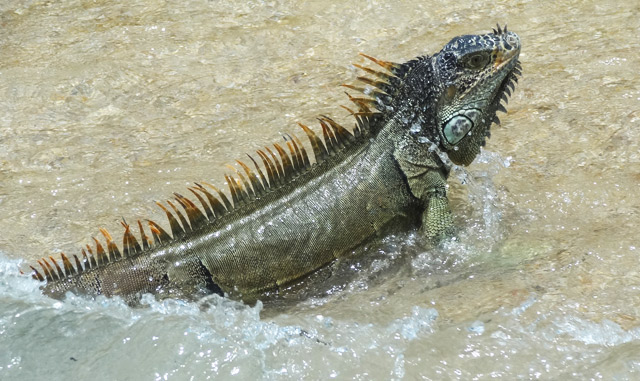 Don’t be afraid to touch them. What’s quirkier than getting up close and personal with an iguana? 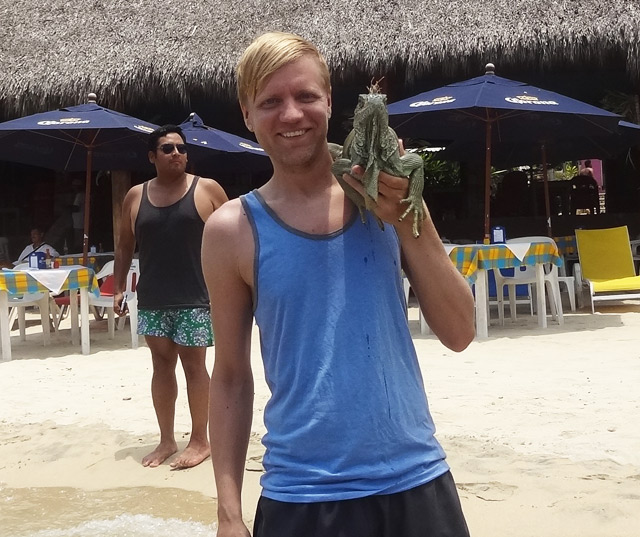 Los Muertos Pier is one of the centers of activity when it comes to beach life in the town. At night, the pier is lit up with a light shower of rotating tints. 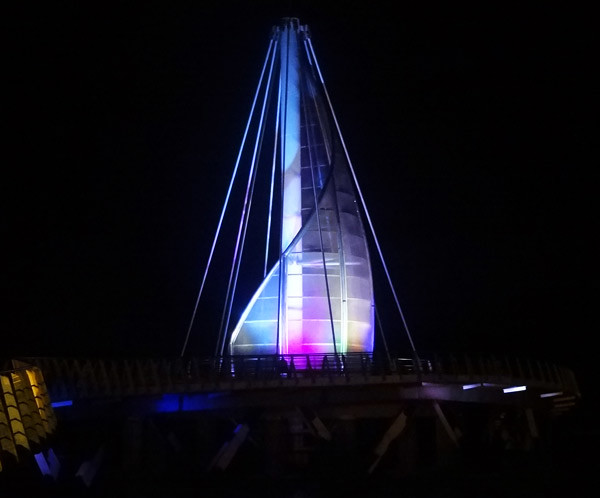 Note: The pier area can get a little sketchy late at night. I suggest going here with friends just after dark, before 9 pm, to get your pics safely.

The murals and street art changes over time as new pieces of art are created and old ones are removed or the buildings are demolished. So just keep your eyes open as you walk around. I love this mural outside CC Slaughters nightclub. 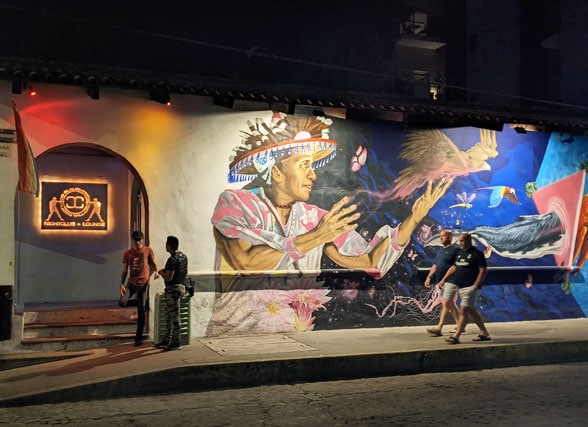 From colorful skulls to Mexican husband/wife salt & pepper shakers, the odd items for sale are kitschy and fun. I consider all these local shops to be a main point of interest for visitors. 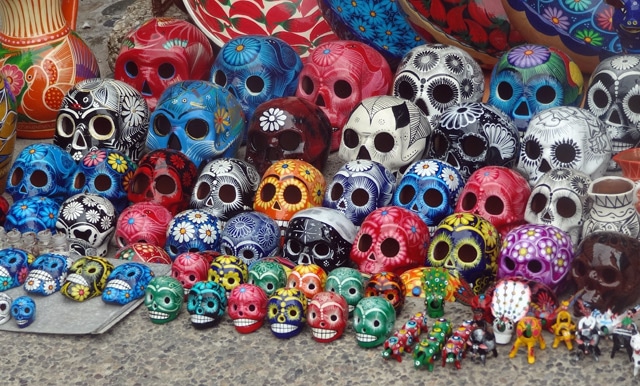 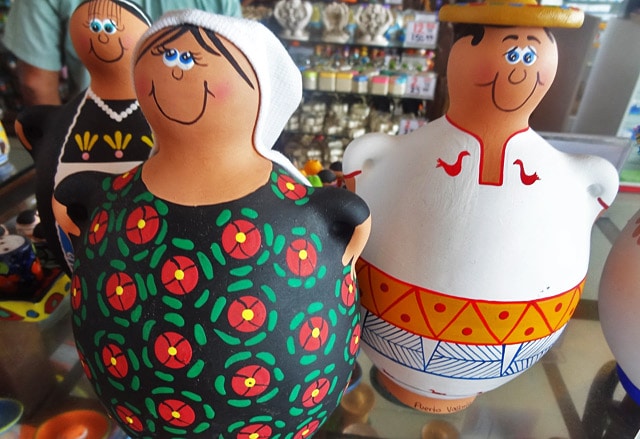 In any foreign country, it’s always interesting to see how different the grocery stores and fast food restaurants are from back in the U.S. In Puerto Vallarta, the McDonald’s offers McPatatas and queso cheese packets.

The tater wedges were tasty, but I couldn’t bring myself to try liquid cheese (“McQueso”) from a plastic package. If Mickey D’s isn’t your thing, there are lots of other great food options in Puerto Vallarta. 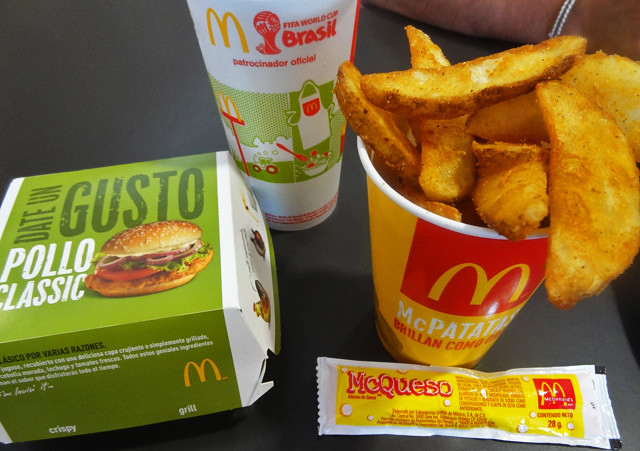 This brought me way more joy than it probably should have. I was excited to see a Woolworth in downtown Puerto Vallarta. This discount department store was a major part of my youth, but I thought they all closed down years ago. Evidently, this one in Mexico survived. Go, Woolworth! 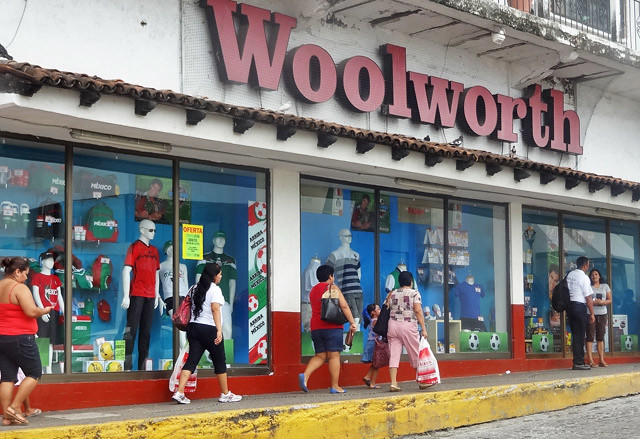 Wild fruit is quirky to me

It’s so cool to stroll around and go, “Look, avocados on the vine!” “Look, bananas over our heads!” “Look, a coconut on the beach!” I’m not used to such easy availability of produce. We don’t have this bounty of fruit growing in the Midwest. 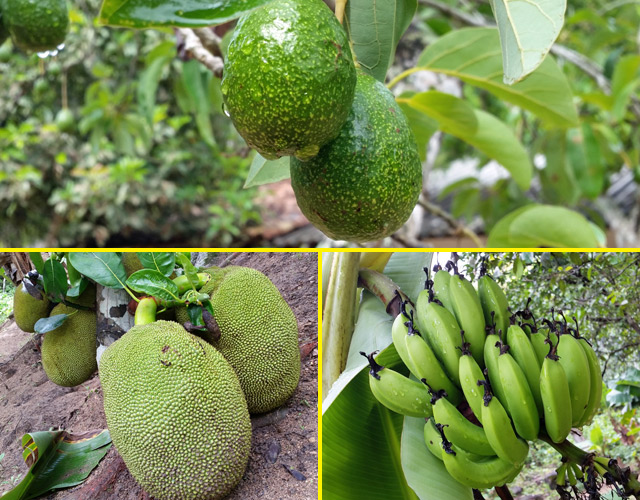 Just look around for more unique things to do

From skeleton women greeting diners at a restaurant entrance to an inexplicable Albert Einstein street art mural, you may find quirky sights around town where you’re not expecting them. That’s part of the fun of being in a new place. Just keep your eyes open. 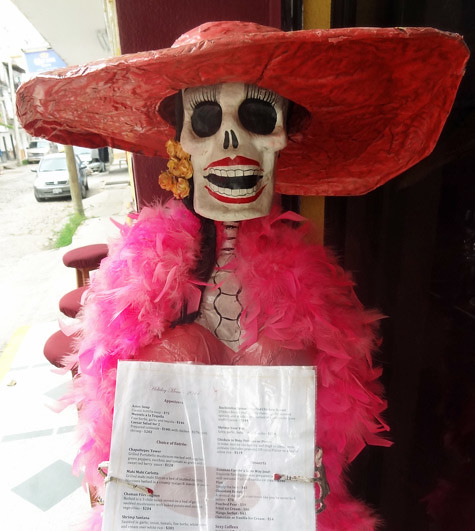 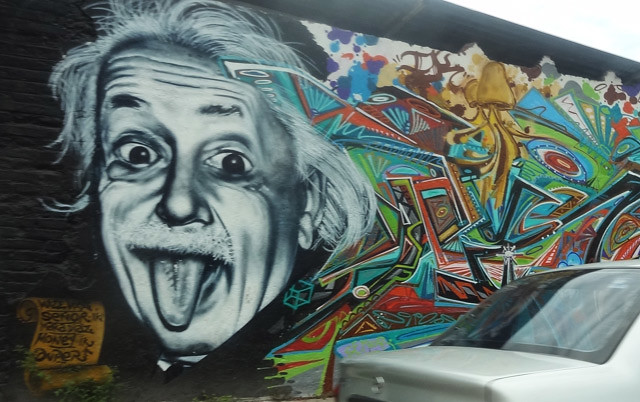 How many of these weird things to do would you want to try? My favorite is the unique colorful staircase and the rest of Cuale River Island since it’s slightly off the beaten path.

It is very possible to visit Puerto Vallarta on a budget. This city also has a lot of gay culture, so here’s an LGBT guide to Puerto Vallarta. And here’s a huge photo essay of pics from around the city.