When I visited the Grand Canyon a decade ago, I was treated to a rare sight: A California Condor sitting on a rock just 15 feet in front of us. It was huge – this thing could tear your face off.

I had no idea at that moment, but later research revealed it was one of only 322 such birds alive in the world. The Condors are a critically endangered species that now exists only in parts of California and Arizona and small patches of Utah and northern Mexico. Condors are a big part of the wildlife of the Grand Canyon and their desperately needed assistance to return to their previous numbers.

Another condor watcher reported a similar experience at the Canyon. She saw three to six condors at the Grand Canyon, including one that sat on a rock in front of her just as mine did.

Since my visit, I’ve been pleased to see several positive updates on the California condor population in America. In 2011, I was super excited to see this CNN article noting that the Condor population had rebounded to almost 400 total and 200 in the wild (the rest are in captive breeding programs.) The article discusses the efforts to rebuild their population and some of the environmental issues that continue to threaten the birds.

By 2016, the total population was up to 446, including 276 in the wild, located in Arizona, Utah, California, and a small portion of Baja California, Mexico. As of this writing, 2019 population numbers do not appear to be available, so the 2016-18 numbers are the most recent ones we have.

There are now enough condors in the wild that they’ve had to come up with sophisticated systems in order to track them. Most birds have a tag that displays their last two numbers. Some, like the A7 I saw, have one number and one letter. If you see a bird with the tag “38,” for instance, that means it’s either bird #38, #138, #238, #338, or #438. To determine exactly which one, look at the color of the tag.

I haven’t found a source that definitively lists which numbers are represented by which colors. However, anecdotal evidence and scattered blog reports would seem to indicate that yellow tags are used for the 200s, and blue tags for either the 300s or 400s. If anyone finds a more reliable source on this matter, please comment or email with the info!

California Condors are among the heaviest birds in America, reaching 26 pounds, and their 10-foot wingspan is the widest. Condors are scavengers who play a key role in the ecosystem by eating the decaying remains of other dead animals.

Unfortunately, due to that diet, the birds are susceptible to lead poisoning. When hunters and farmers shoot and kill an animal, condors will eat the remains, including the fragments of ammunition lead, which causes them to get sick and die. Sadly, a full 50% of Cali condors die this way.

This is even an issue for the Grand Canyon California condors. Although there’s no hunting inside the national park, there’s still plenty of shooting in nearby areas of Arizona and Utah outside the park.

Following Up On My California Condor Grand Canyon Experience

As for that Condor I saw at the Grand Canyon (number A7, according to its tag), the ranger said he’d never seen one so close. In fact, he was concerned that it didn’t seem afraid of people. It hung around for at least 15 minutes. We walked off to take a few pictures, and when we came back it was gone.

Since the bird was tagged, some online research allowed me to discover its fate. It turns out that condor A7 (and two others) had behavioral issues and were captured and sent to a sanctuary in Boise, Idaho for their own safety. 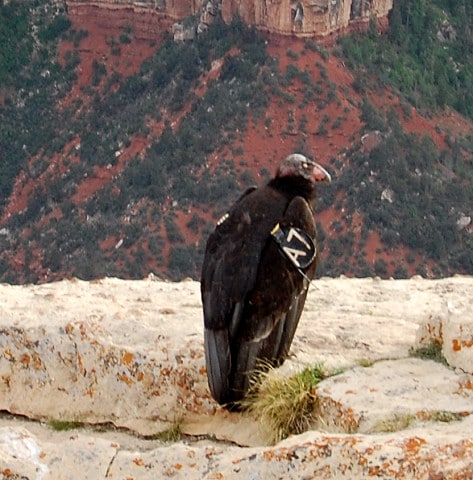 Where can you see California condors at the Grand Canyon? Various lookout points and both the North Rim and South Rim report lots of sightings, and so does the Vermilion Cliffs region.

2 thoughts on “Return of the California Condor: Grand Canyon Activity and Population Update”