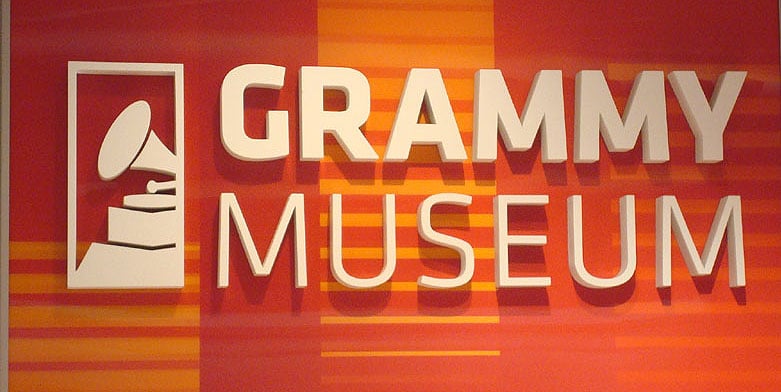 As a huge music fan, I feel it’s my duty to provide a review of the Grammy Museum in Los Angeles.

I’ve seen every Grammy broadcast since the mid 1980s, and though I often don’t agree with the winners, I’ve become something of an expert on the awards. For several years, one of my side gig was covering the Grammys for sites like examiner.com and totalmusicawards.com. I even attended the 2016 Grammys as a member of the press.

I’ve visited the Grammy Museum twice; once several years ago after it opened, and once more recently. Here’s what you need to know about visiting, including museum hours, ticket prices, and the exhibits you’ll see inside the facility. 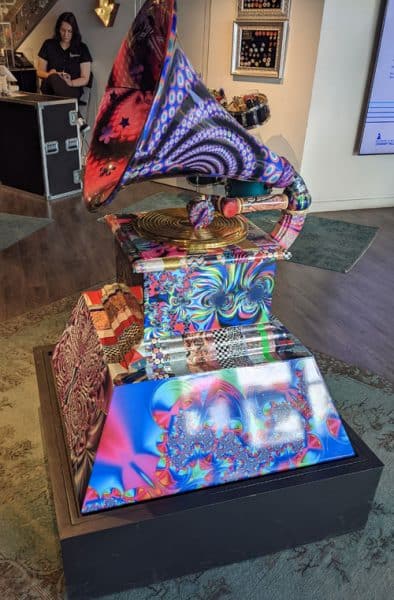 The museum is located in downtown Los Angeles, one of the coolest neighborhoods in the city. It’s near the crypto.com Arena (formerly the Staples Center).

The 30,000-square foot facility opened in December 2008 at 800 W. Olympic Blvd. There is no parking available on the street or in the building, so you’ll have to find one of the nearby LA Live paid parking lots.

You can buy tickets in advance online, or at the door. Unless there’s a special event going on, you won’t have to worry about the place being too crowded.

Adult tickets for the Grammy Museum are currently $18. Kids 5-17 and college students are charged $12. The price for seniors and military is $15. Kids 4 and under are free. 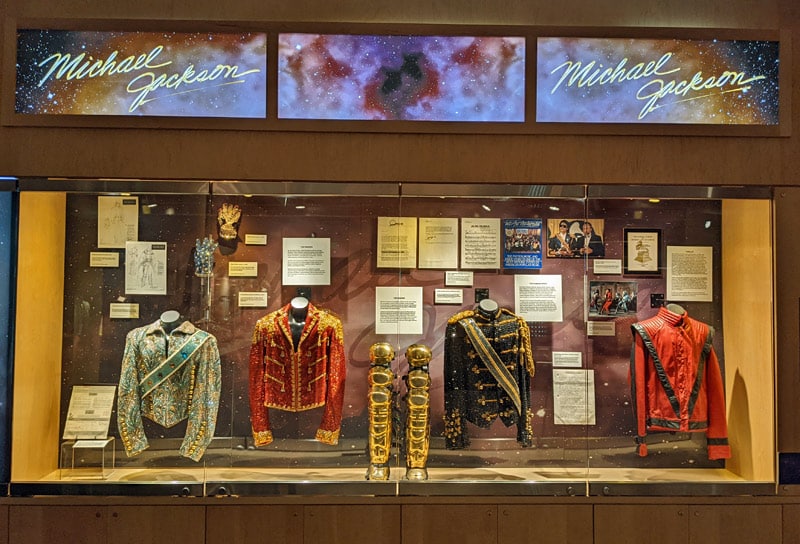 There are hundreds (thousands?) of artifacts on display. The Michael Jackson display is a major part of the museum. This case has jackets he’s worn over the years (including the Thriller jacket), gloves, and handwritten lyrics to “Man in the Mirror” (by Siedah Garrett – Michael didn’t write that one.)

They even have the original Jackson 5 application to join the Recording Academy from 1968. That’s a nifty piece of music history.

There are soooo many Grammys on display here. One case has all 20 awards won by composer Henry Mancini, who’s on the list of most nominations in history with 72:

Another of my favorite items in the museum is the collection of handwritten song lyrics, from artists ranging from Bob Dylan to 2Pac to Taylor Swift. The museum displays Swift’s original notebook pages with the words to her first hit, “Tim McGraw,” which I believe is still her best song. Taylor’s penmanship is fantastic, by the way.

Lennon made only a few changes to that song. Contrast that with the handwritten lyrics to Eminem’s “Stan,” which are a total mess, as the rapper randomly jumbled together verses across the page. I don’t know how he made any sense of it, since the verses jumped all over the place and nothing was in sequence.

They’ve recreated a Grammy red carpet inside, perfect for your Instagram selfies. 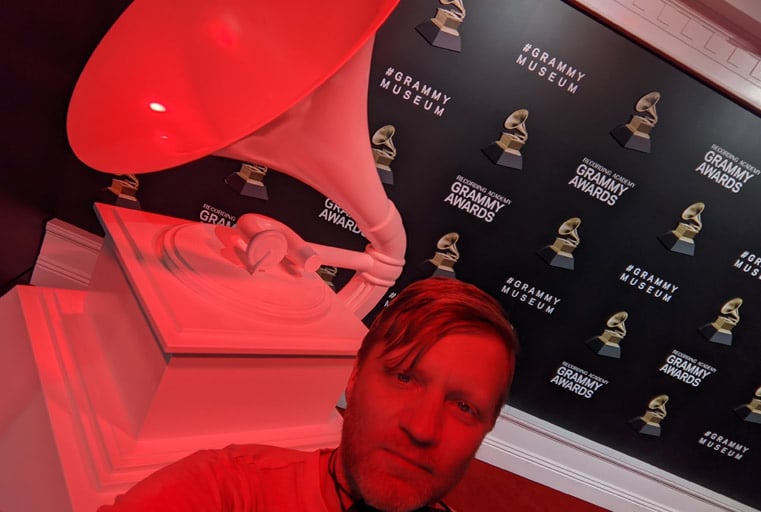 Another of my favorite exhibits is the collection of dresses and suits worn by famous singers at previous Grammy ceremonies.

Here’s the gorgeous flower dress Taylor Swift wore while winning Album of the Year in 2021. 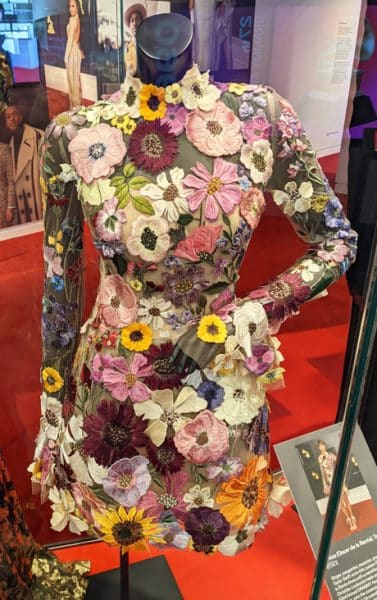 There are a LOT of video screens in this museum. In fact, you can watch a video recap for each of the 64 years of Grammy history. Separate video screens recap the popular music of each decade.

Diva alert! Whitney Houston has a display case in her honor of her incredible career and Grammy achievements. This was a dress she actually wore at a different award show – the 1989 Soul Train Music Awards. 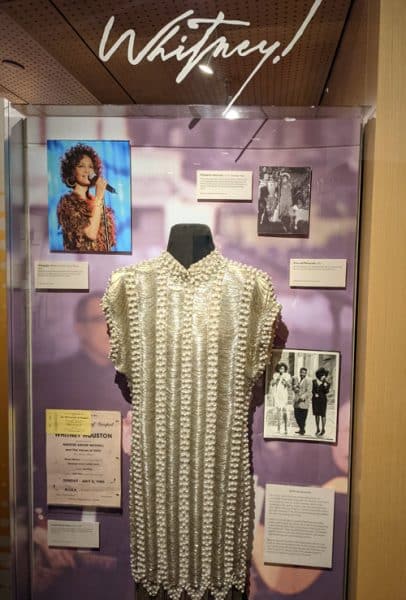 There are also rotating temporary exhibits on display. During my recent visit, the museum had a tribute to the Marley Family, with photos and clips highlighting the contribution to reggae music of Bob Marley and his sons.

This next one is no longer on display, but the museum lobby used to house a psychedelic 1965 Porsche once owned by Janis Joplin that has been restored to its original condition. Who doesn’t love Janis? 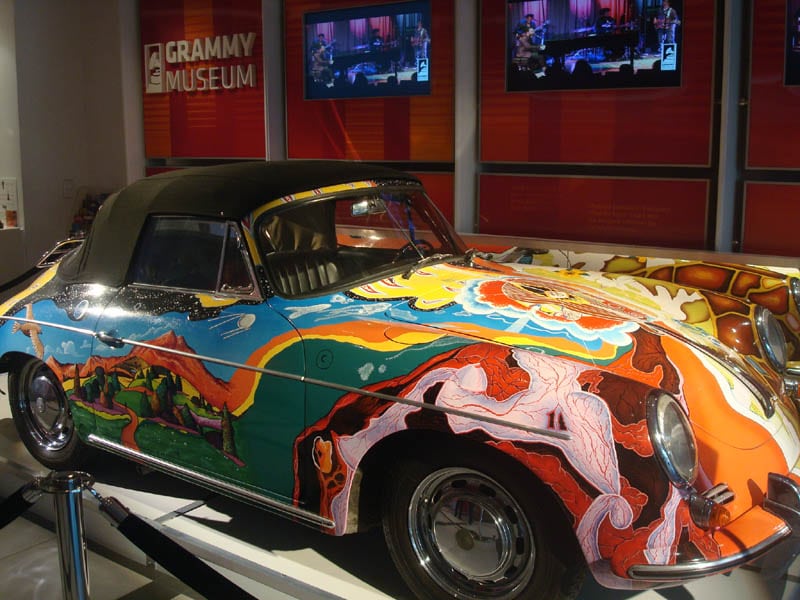 Photography Inside the Grammy Museum

For many years, photos were not permitted inside the Grammy Museum, which was super lame. Come on – how can you display the light-up outfits Daft Punk wore at the ’08 Grammys and not let us take pictures of them?

Finally, the Grammy Museum changed its policy and now permits non-flash photos inside. They do prohibit professional photography and video recording. But you’re free to take pics of the many artifacts and share them on social media. 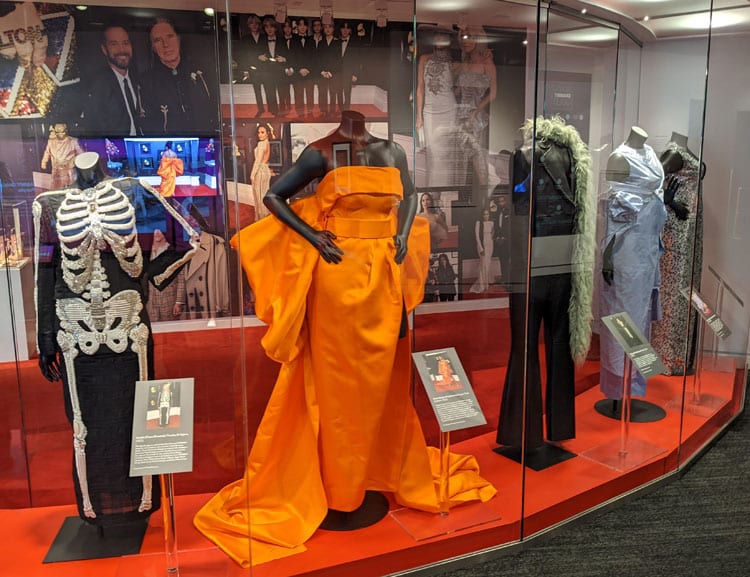 Interactive Exhibits at the Grammy Museum

UPDATE: Both interactive exhibits in this section are no longer on display at the museum. They both appear to have been moved to the Grammy Museum’s new branch in Mississippi.

One cool element of the museum is they have musical tutorials and actual instruments for you to play, although they’ve been dumbed-down and modified, Guitar Hero-style. I spent a few minutes pounding out some beats behind the drum kit.

They also have keyboards where you can remix Beyonce’s “Halo” and guitars where you can play famous riffs. While this is a fun element of the museum, it’s nothing special, given that most kids (and adults) have played Guitar Hero or Rock Band. Had this exhibit appeared five years ago, it would have been a lot more amazing.

Another touch-screen table allows users to explore any genre of music in history, including such niches as electronica, new age and industrial rock. For each genre, you can listen to seminal songs, read about its biggest artists, and see which other genres are closely related.

A music geek like me could spend an hour at this exhibit alone, but I managed to pry myself away after reading about emo, disco and metal.

Is the Grammy Museum Worth It?

That depends on how much of a music fanatic you are. For me, it was 100% worth it, because I’m obsessed with award shows and getting to see some of these awards and musician outfits up close was a thrill.

Some exhibits were more worthwhile than others, but for my money it was worth the price of admission.

The Grammy Museum compares favorably with Nashville’s Country Music Hall of Fame, and while it’s not as large as the Rock & Roll Hall of Fame, music fans should still check it out.

Find out more at www.grammymuseum.org. This site was the original Grammy Museum, though in the past few years new branches have opened in Mississippi, New Jersey, and Nashville, Tennessee.