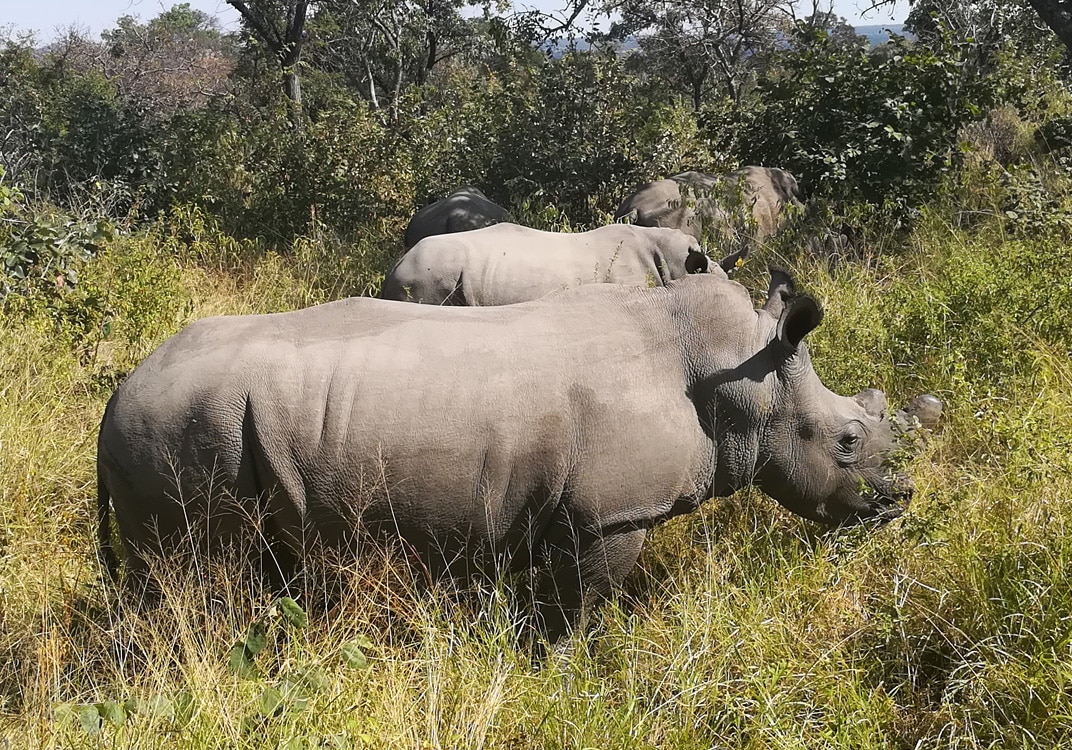 The huge white rhinos munched on tall grass, occasionally looking over to size us up before returning to their chomping. The enormous creatures stood just 15 feet away from us as we watched in silence.

Being so close to these giant animals was a little unnerving, especially since all of our previous wildlife encounters had been from the safety of our safari vehicle. Out here walking among the shrubs and trees of Zimbabwe’s Matopos National Park, it was just us and this group of four rhinos.

Rhinos are only aggressive when they feel threatened, and on this day they were gentle giants who barely acknowledged our presence as they snacked on breakfast. Our experienced guide made chomping noises of his own to soothe the beasts while they dined.

Getting so close to such a majestic animal, especially one that is threatened due to excessive poaching, was an incredible life experience. In fact, this rhino walk was the coolest wildlife sighting during my two months in Africa. 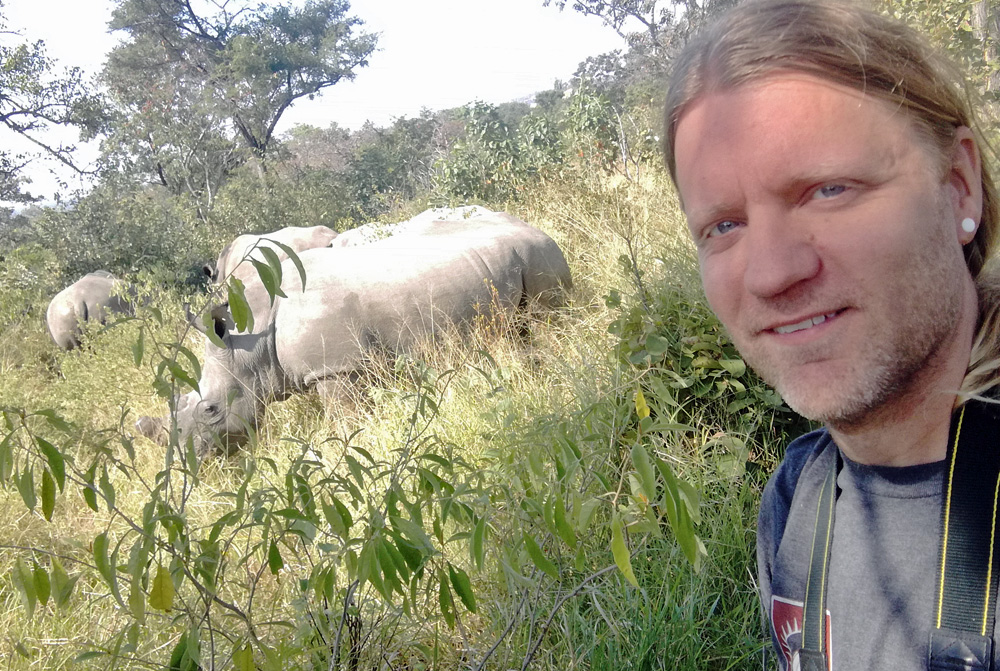 Matopos National Park, also referred to as Matobo National Park (the park signs use both names interchangeably), has a population of both white and black rhinos.

Our rhino walk guide in Matopos was Ian Harmer, who is well-known in Africa for dedicating his life to the plight of rhinos – and for staking out some controversial but logical positions on the issue of rhino horn sales, which we’ll discuss later. 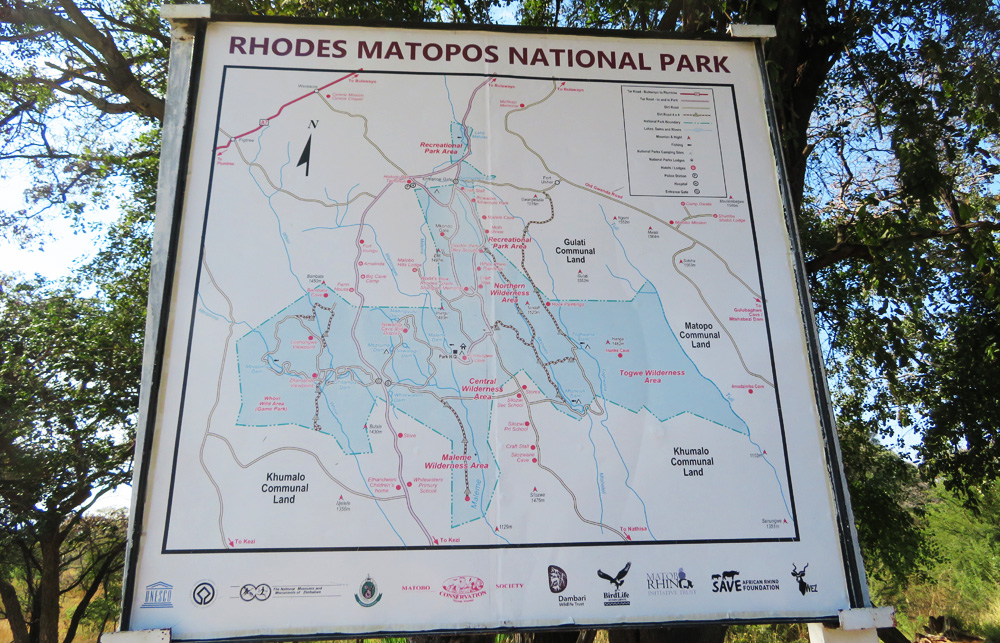 Thanks to radio contact with rangers, Harmer was able to drive us to the general area where the rhinos happened to be hanging out on this particular morning. Then we hopped out and began walking.

Armed guards stayed in close proximity to our group. Not to protect us, but to protect the rhinos. Poachers have become so brazen that they sometimes even kill rhinos in protected areas like Matopos. Many parts of Africa now have a shoot-to-kill policy when it comes to poachers.

After just a few minutes of walking, we arrived upon a group of four rhinos. They made no sounds, aside from the munching noises as they ate.

Harmer informed us that it’s generally not smart to approach closer than 20 meters. But if you remain still, sometimes the rhinos will walk towards you on their own. It’s up to them to decide if they want to get close.

That’s exactly what happened in our case. As we snapped selfies and stared in awe at these magnificent animals, they slowly meandered in our direction. They wandered as close as 15 feet away before continuing on.

You know you’re having a great day on safari when you can get close enough to a rhino to read the number on its ear tag! 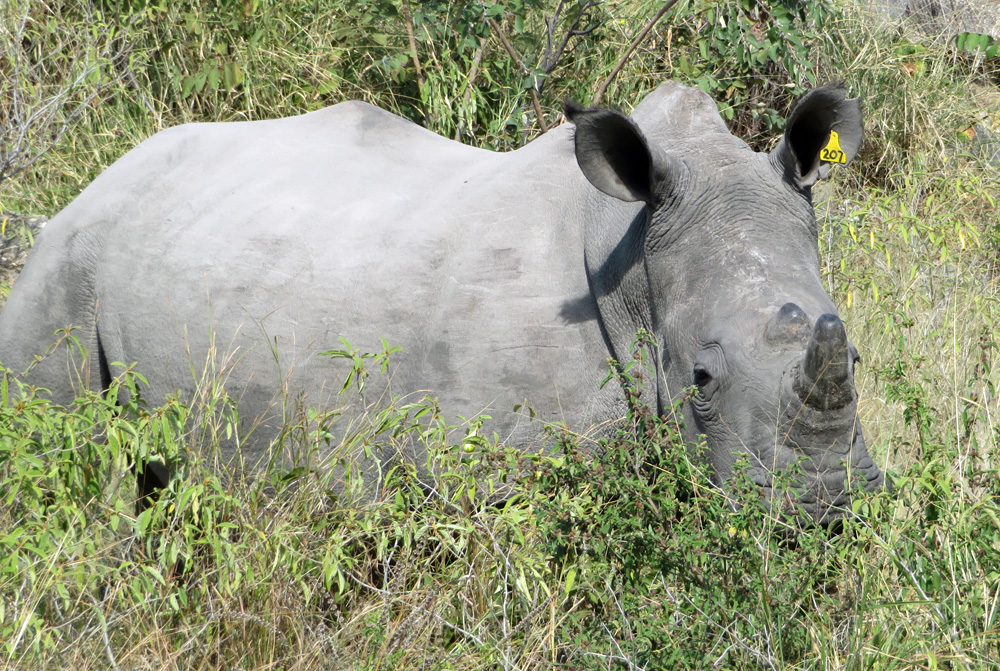 The encounter lasted only 10-15 minutes, but it was a powerful moment. Later, in another section of the park, we found another group of rhinos that included a baby. These rhinos stayed about 30-40 feet away, and they moved on after about five minutes. But the experience of witnessing a baby rhino with its mom in the wild was a memory that will last forever. 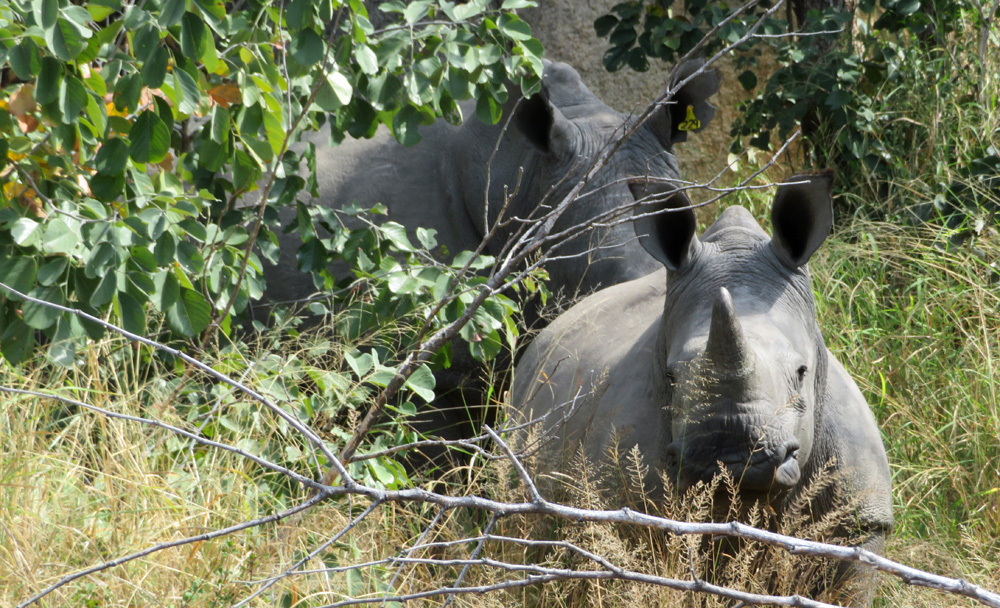 The Threat Of Rhino Poaching

Before we headed into the bush, Harmer gathered us to give his perspective on rhino poaching, which is devastating the rhino population. Recent figures suggest there are roughly 20,000 white rhinos left in the world, and fewer than 4,000 black rhinos. Seemingly every week, a new story comes out about rhinos being killed for their horns in some part of Africa. 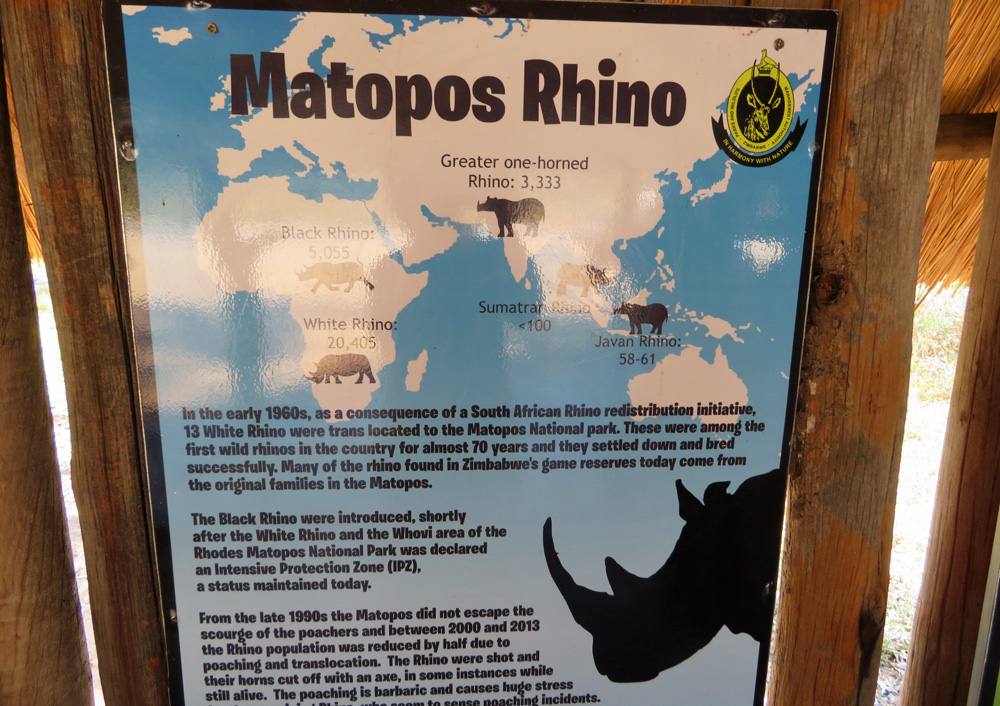 It’s not hard to see why. A single rhino horn can fetch as much as half a million dollars on the black market. Rhino horn is regarded in places like Vietnam and China as a cure for all sorts of conditions, including impotence. No evidence backs up these beliefs, but people there still pay crazy amounts of money for powdered rhino horn. 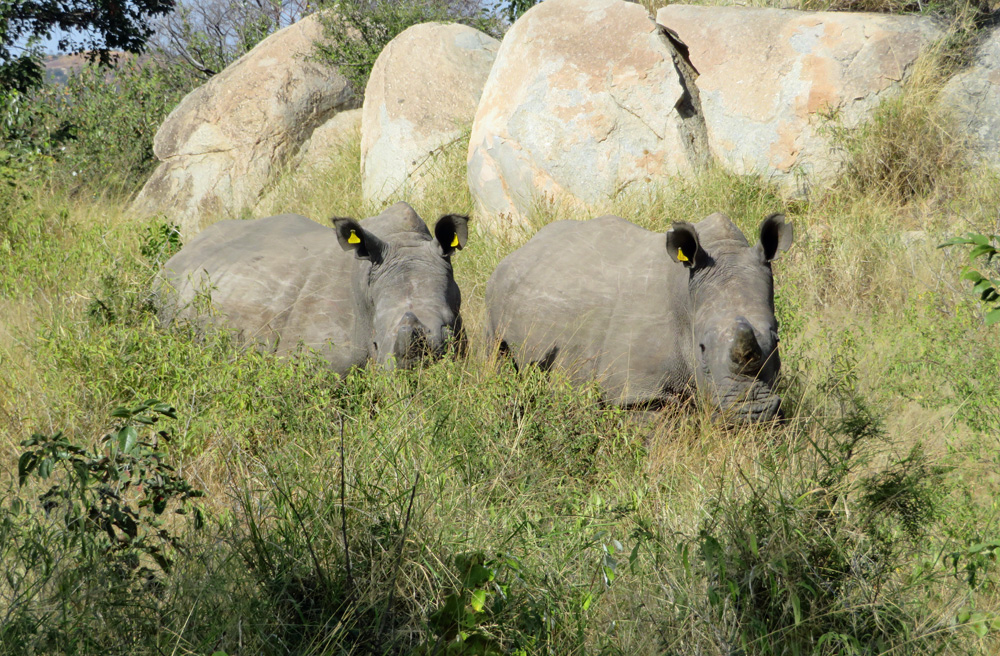 So poachers continue to kill rhinos, then smuggle the horns abroad and sell them. Even rhinos in national parks are not safe, because with that amount of money at stake, guards and police can easily be bribed. It’s a sad commentary on how low humans can sink for selfish reasons.

These poachers have gotten sophisticated. Harmer cautioned that if we post any pics of rhinos online, we should remove the GPS tracking data that some phones attach to photos these days. Because poachers will actually scour the internet to find this information, so they’ll know exactly where to go to locate the rhinos. 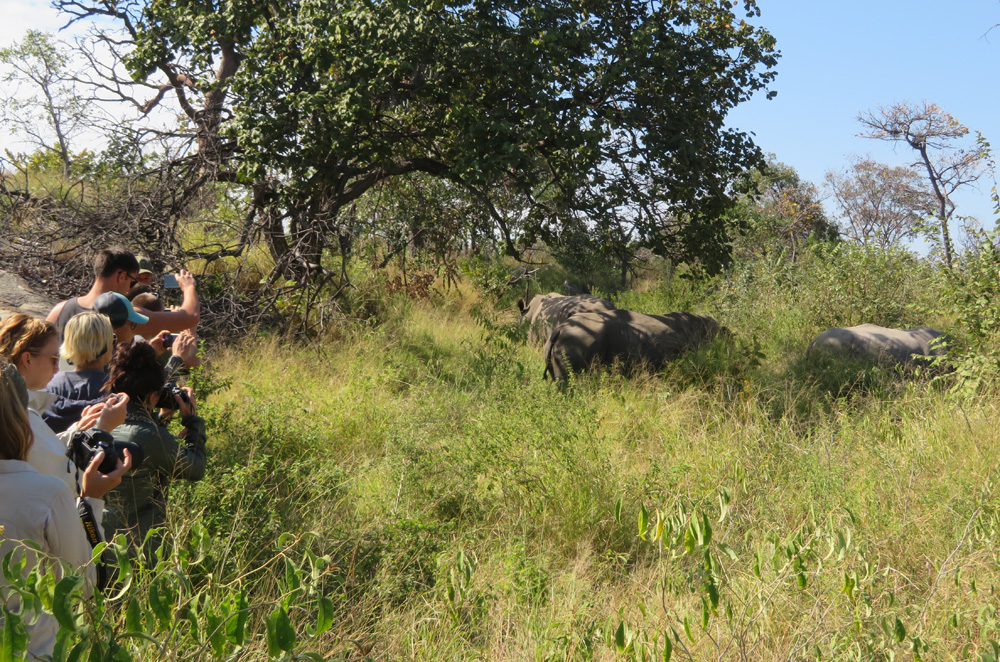 The truly depressing part of this situation is that rhino horns are like fingernails – they grow back over time. So it’s not necessary to kill rhinos to get their horns, but poachers do it anyway. 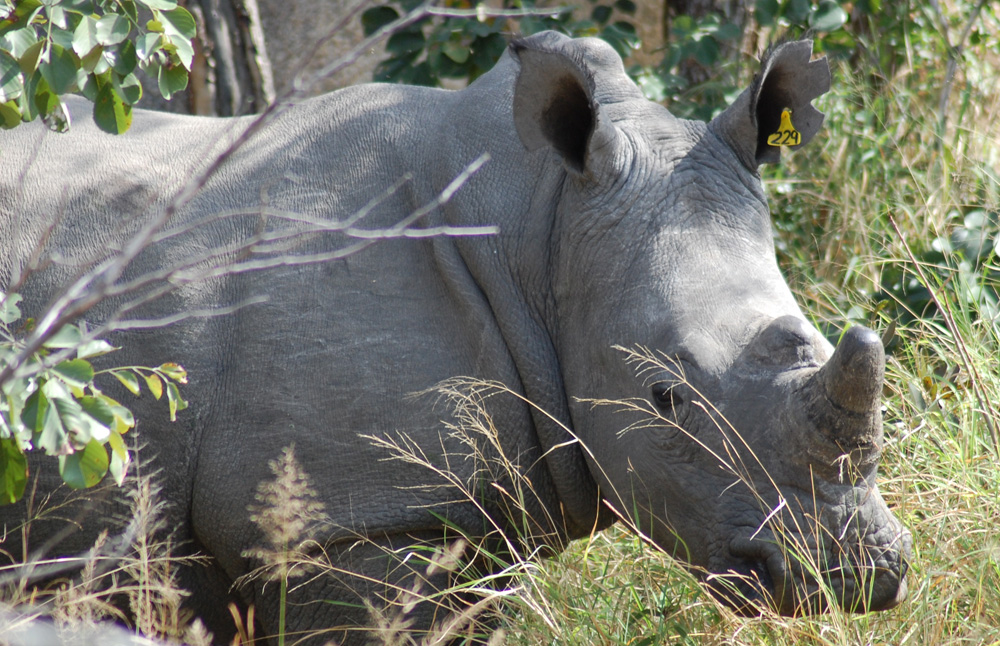 Harmer explained that, in the past, rangers would periodically saw off rhino horns in protected areas like national parks to make them less attractive to poachers. He acknowledges that seeing a bunch of rhinos walking around without their horns is sad, but “hornless rhinos are better than dead rhinos.” 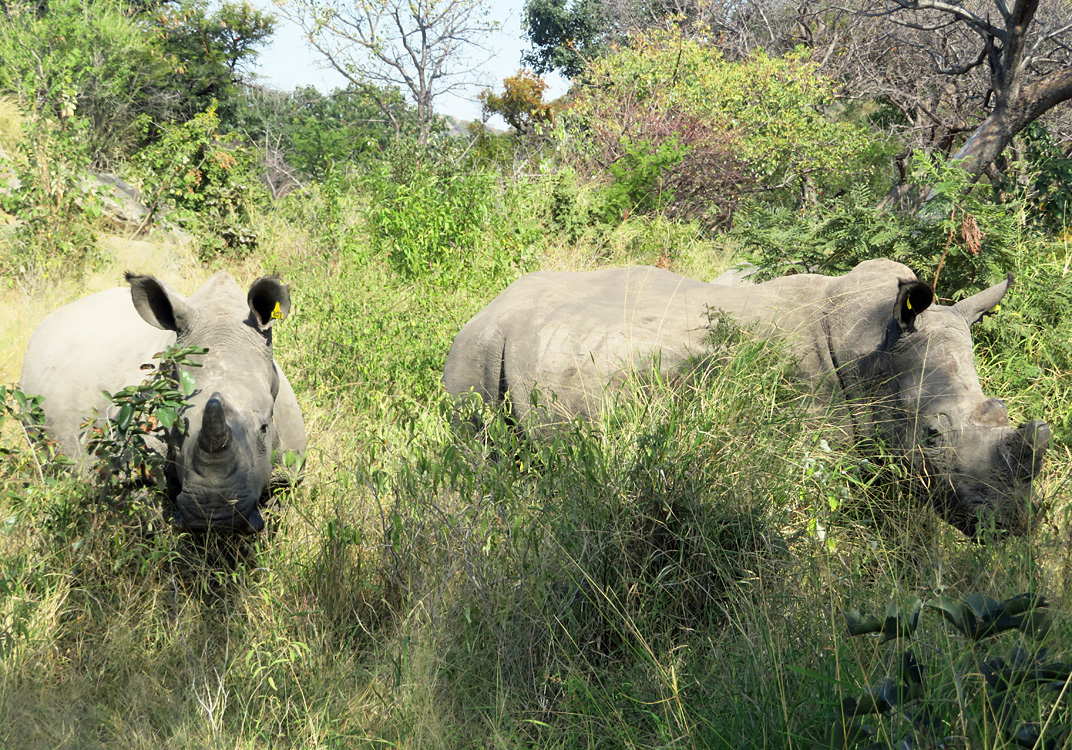 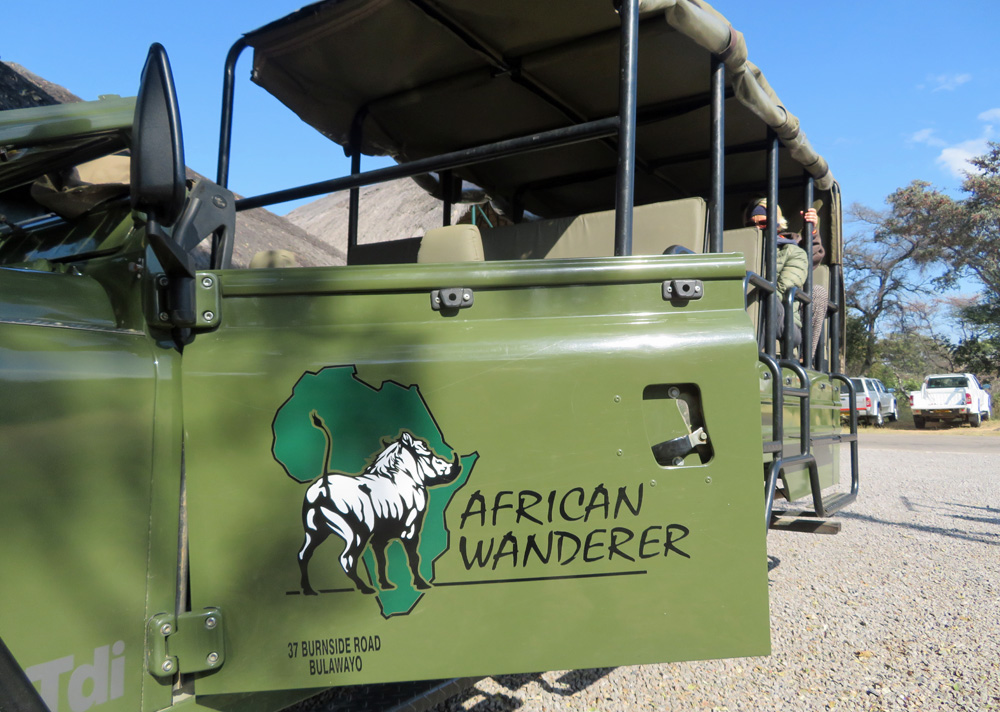 He says that governments like South Africa already have huge amounts of rhino horn in storage that was seized over the years from poachers. He suggests that governments simply make these horns available for sale. If they all hit the market, that would send rhino horn prices crashing, because supply would far outweigh demand. Hence, there would be less monetary incentive for poachers to kill rhinos. And it would be enough to satisfy demand for rhino horns for at least the next 20 years. 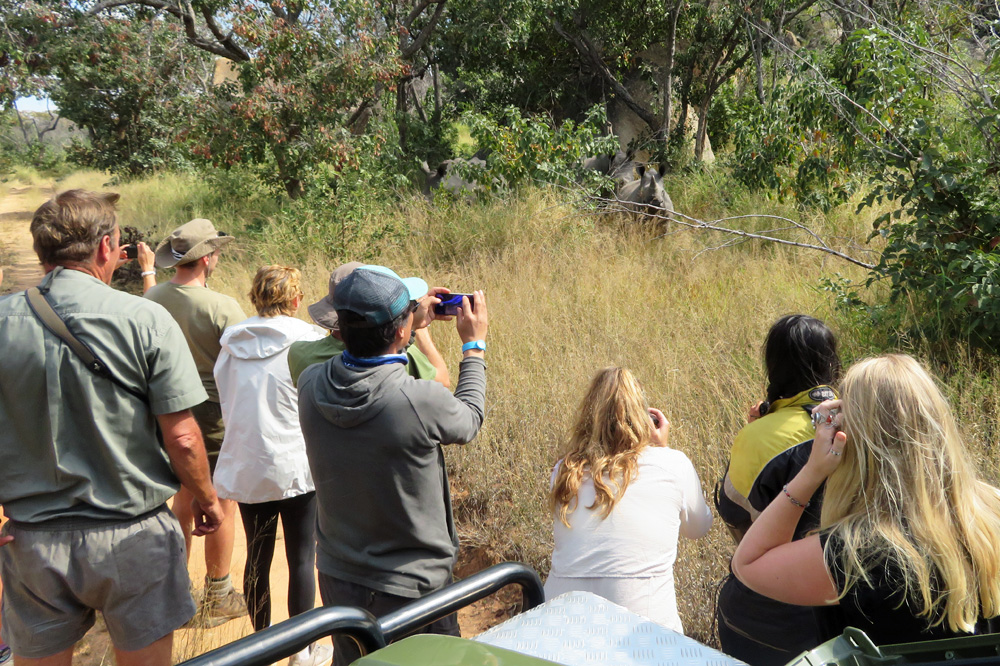 His argument sounds logical. Shaving off a few rhino horns, or selling what we already have, could be a good way to meet the demand in the market. If that will keep the species alive, why not do it? I know this much: The experience I had on my rhino walk in Matopos National Park was something I will never forget. It would be a tragedy if future generations cannot have that same experience.