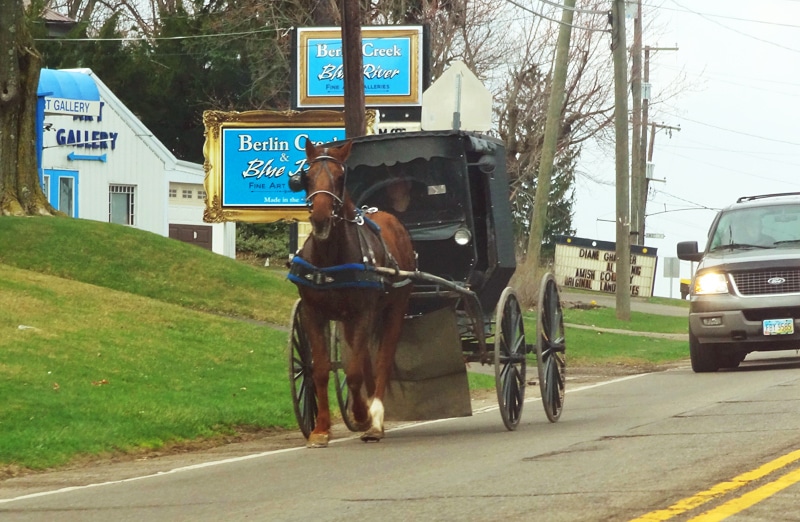 Upon arriving in Berlin, Ohio, I made a pit stop at a restaurant and grabbed an “Amish Country” brochure from the counter to read while I dined. But when I sat down, surrounded by several Amish and/or Mennonite families in nearby booths, I immediately felt awkward and hid the brochure in shame.

These are real people! Why am I reading about them as if they’re objects in a museum?

Given my own Amish heritage, and the fact that I’ve met and chatted with many Amish folks in the past, treating them as zoo animals to be observed and studied just didn’t feel right. I began to wonder… Do the Amish even want me here? Am I an intruder?

Dealing with one’s nagging voyeuristic guilt was one of the challenges when it came to visiting Amish Country. These sorts of mixed feelings are common, but as I learned from talking to local Amish folks in Berlin, Ohio, my fears were largely unfounded.

In fact, Amish and Mennonite families in towns like Berlin are reliant on your tourism dollars. So by all means, plan your visit – but take the extra step to try to be respectful and responsible when you come.

My goal was to have as many authentic experiences as possible. Rather than creepily peering at Amish folks and snapping photos from afar (we’ll get to the issue of photography later), I wanted to meet and chat with as many Amish and Mennonite folks as I could to learn about their history, their culture, their perspective on life.

As suggested in the previous Amish Country post, the best place to start in Berlin is the Amish & Mennonite Heritage Center. There, you’ll learn about the local folks and you’ll have the opportunity to ask as many questions as you like of the Amish and Mennonite staff members. They can also point you in the direction of authentic activities that may interest you.

Beyond that, if you’re taking any tours, do your homework on the companies involved. One Amish resident half-joked, “Anything with ‘Amish’ in the name probably isn’t.” While I didn’t find that to be entirely true – in fact, my backroads experience with Amish Heartland Tours was fantastic – you should make an effort to make sure any companies you work with are reputable.

An employee at the Amish & Mennonite Heritage Center told a story about a tour guide from out of town who brought in a group and gave them all sorts of misinformation about the Amish. When he informed the guide privately that some of her facts were not quite accurate, she replied that she didn’t care – it was her tour and she was going to dispense information as she saw fit. That’s further proof to ensure that your guides have experience and know what they’re talking about!

While driving throughout Holmes County, I did not see that many tourist traps, but there was one that did make me uncomfortable. It was this absurd Disney-ish train ride that looked like one of those little kid trains in the shopping malls at Christmas. 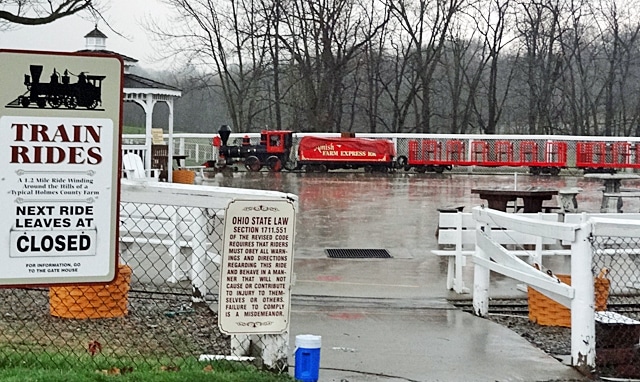 Offered by a local company and billed as an “adult Amish train,” the ride followed a track down a short hill past “a typical Holmes County farm” and then circled back up to the start. I can’t fathom why any human being would want to ride this, as it seemed completely out of place and insulting to both the passengers and the Amish.

In terms of more traditional transportation, some Berlin businesses offered rides in Amish buggies. As an outsider, getting a ride in a buggy seemed like the ultimate Amish experience. But as our horse, Shirley, guided myself and an older Amish gentleman around a back street, I was again hit with some of that guilt. Is taking a ride in an Amish buggy belittling to Amish culture? 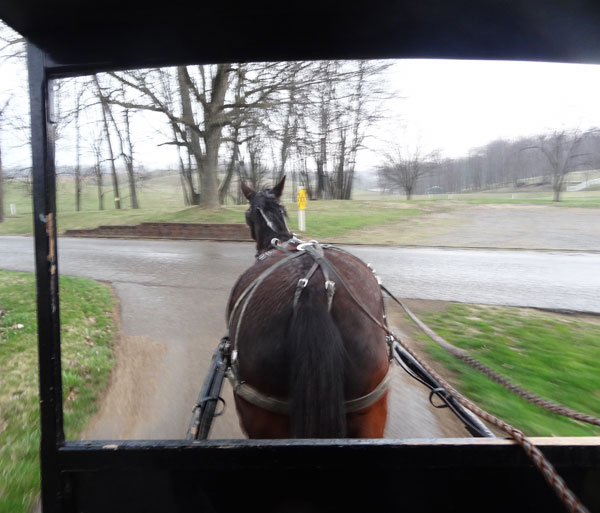 I enjoyed the brief ride, and it’s certainly a life experience that most people never get to have. But I spent most of the trip chatting with my Amish driver to learn about his perspective on life in Berlin. That convo ultimately proved more rewarding than the few minutes sitting behind the backside of a horse.

How do the Amish in Berlin feel about all the tourists?

By this point, my go-to question when chatting with Amish folks in the Berlin area had become: How do you feel about all the tourists? The range of responses was interesting.

One Amish man bit his tongue at first, but eventually acknowledged that the presence of the tourists was partially positive and partially negative. Common reservations the Berlin Amish expressed were the rapidly changing nature of the town due to visitors, as well as the traffic, which can get heavy during peak tourist season in the summer as cars and buggies vie for space on the two-lane roads.

On the flipside, many Amish and Mennonite folks pointed out that the tourists pump a lot of money into the economy. One Amish woman was surprised that anyone in her community would question the value of outsiders.

“Without the tourists, a lot of people would be out of work,” she told me. Since many of the Berlin Amish and Mennonites are not farmers and have jobs that rely on tourism, they need and appreciate the visitors. Tourists frequent places like Heini’s Cheese Factory, which is one of the most popular businesses in the area.

Back to the question I raised about the initial awkwardness of being in Amish Country. Isn’t it bizarre to have people come from all over the world just to see how you live your daily lives?

The Amish residents I spoke with acknowledge that it’s odd, but they understand the curiosity and find that the overwhelming majority of visitors are nice people genuinely interested in the Amish way of life and seeing an authentic Amish experience.

And the Amish themselves do travel. Many go to Florida for large gatherings each year. Some have been to Europe. Amish folks told me of their dreams to visit places like Alaska and some remote Pacific islands. 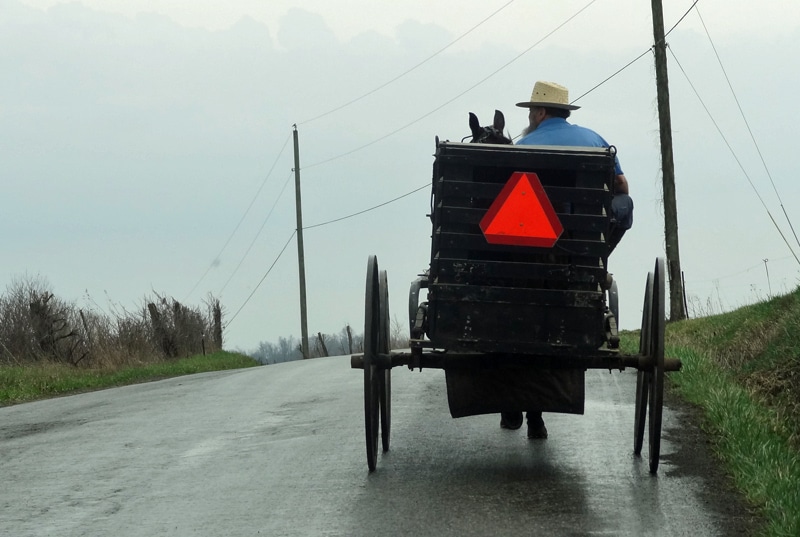 One Amish man recalled a trip to Europe, where he observed the locals in much the same way that tourists come to Berlin to observe his culture. That helped him understand the perspective of visitors to his own town.

Can you take photographs of the Amish?

There’s also the issue of photographs. The Amish prefer not to be photographed, especially up close, as pictures can be seen as prideful and unnecessarily drawing attention to oneself. I was advised not to take pics in which faces were recognizable, and I certainly respected that guideline. I did get plenty of pics of other sights around town, which can you see in Wednesday’s upcoming post.

On another issue, I typically buy magnets from every place I visit. Was it cool to buy a horse & buggy magnet? Because I did that. It felt weird turning the Amish’s reliable method of transportation into a novelty item to stick on my fridge. At least I bought it at the Amish & Mennonite Heritage Center, so I knew the money was going to a good place.

Despite the mixed emotions, visiting Amish Country was one of the highlights of my year, and I would encourage anyone curious about the Amish to make a visit. Berlin is a wonderful community, as are many of the surrounding little towns. Do some research, figure out what kinds of experiences you want to have, and schedule your visit!

Have you ever had an authentic Amish experience?

4 thoughts on “Searching for An Authentic Amish Experience in Ohio”