As we make the left turn and see the long, dark road ahead of us, I know we’ve found the perfect spot. The houses and city lights of downtown Reykjavik are hidden behind us. We’re surrounded by water on most sides, and very few cars are driving past.

This is the ideal location to pull over and watch for the Northern Lights.

A week of missed opportunities attempting to see the Northern Lights

This is crunch time. Our ninth and final night in Iceland. The last chance to possibly see the famed aurora borealis. Sure, back on night three in Hofn, we’d gotten a few weak aurora pics, but we never actually saw the green lights in the sky.

Sometimes, it turns out, your camera can pick up the lights with a long exposure shot even when they’re not visible to the naked eye. That’s what happened in Hofn. If we don’t see anything in the sky tonight, the Hofn photos will be acceptable (barely) for sharing on social media. But I’d still really love a genuine Northern Lights experience.

Because the lights are unpredictable, we spent probably 10 hours total over the course of the trip, sitting in the car in the cold, waiting in vain for a light show that never happened.

In Akureyri, we set up camp on a pullout on the mountainside across the bay from the city. Getting pics of the lights above the city would have been sweet. In Egilsstadir, we found a great spot in the parking lot right behind a large abandoned ship near the lake known as Lagerfljot. If the aurora showed up right behind the ship, we’d have positively epic images. In the small town of Holmavik, we didn’t even need to leave our Airbnb – the house had skylights allowing us to look directly out to the rural sky.

But in each of these instances, mother nature did not cooperate, and the Northern Lights did not appear.

Where to see the Northern Lights in downtown Reykjavik?

That brings us to tonight, September 19. The forecast is only a 3 on the 1-9 scale on Vedir, the most reliable (but still not that reliable) aurora forecasting site. A 3 is still ok, as long as there’s no cloud cover.

Since we had spent so many fruitless hours watching for the lights already this week, we decide tonight that we’re not going to drive way out into the country looking for a quiet, dark spot. There’s got to be a place to watch the Northern Lights in downtown Reykjavik! Or at least somewhere close by.

Getting away from the city lights is a challenge in a city of 122,000 people. But on the street maps, we notice a peninsula on the far west of the city limits. It’s surrounded by water on three sides, with a golf course at the end of the road and no houses around. This seems very promising! 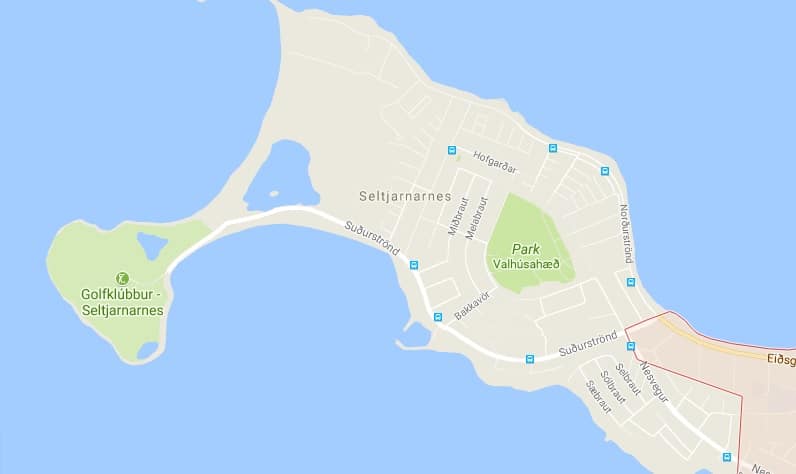 Sudurstrond is name of the street. We head there sometime around 10pm. We locate a parking lot about two-thirds of the way down the road, before reaching the golf course grounds. Three other cars are already here sitting in the dark, which is a positive sign. This must be a good place to watch the Northern Lights in Reykjavik!

Nothing is visible in the sky yet, but we start taking long exposure shots (20-30 seconds) with our cameras. It’s not long before a few streaks of green show up. Score! The lights are coming out!

A few more cars arrive, which causes minor chaos each time because their lights interrupt our shots. No big deal. We wait patiently for the next window of darkness.

The woman in the car next to us has a huge tripod and appears to be getting some cool photos. The family behind us doesn’t seem to realize that the lights are even visible yet.

As we keep shooting, streaks of green begin to appear across the sky. Now they’re visible with the naked eye! The streaks appear to be slowly rolling and folding in the air, growing stronger and then fainter, larger and then smaller, always changing.

The pics I get tonight aren’t great because my trusty pocket camera inexplicably cannot do long exposure shots. So I’m left with my phone. But that’s fine. I’m not really here for the photos. I’m here to soak in the moment, the experience of seeing the Northern Lights in person for the first time.

As the light show continues, we get a little experimental and try some fun photos. My friend Jason gets a great shot of the sky behind a nearby vehicle. 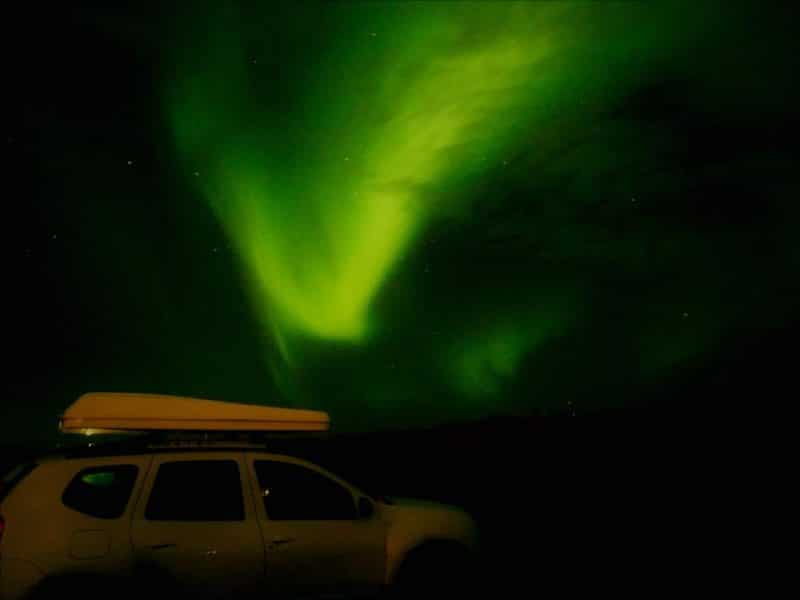 We stand in front of the lights, trying our best to hold poses for 30 seconds. It’s freezing cold and windy, so we have to keep going back inside the car to warm up. We can’t start the engine, though, because then the car dashboard would light up and interfere with the photos. 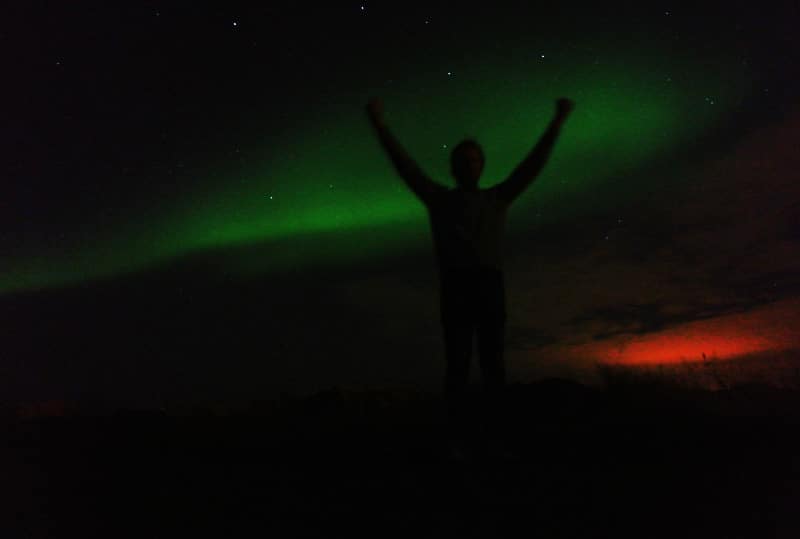 The frigid temperatures can’t ruin this experience. I decide to try for one last photo by resting the phone on the ground against a water bottle, then running over to stand on a small hill in front of the lights. I bring out the signature “arms raised” pose. The photo works. At this moment, I really am on top of the world. 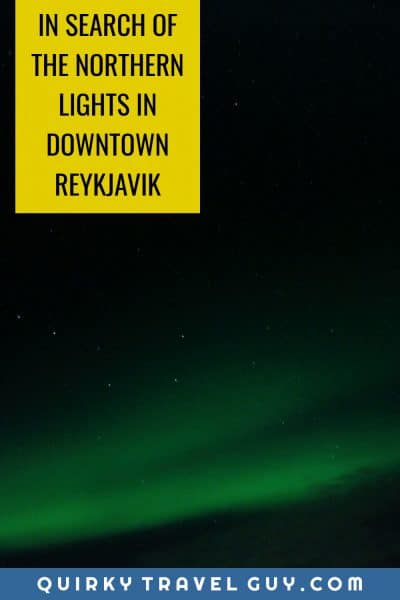 4 thoughts on “Down to the Wire: In Search of the Northern Lights in Downtown Reykjavik”