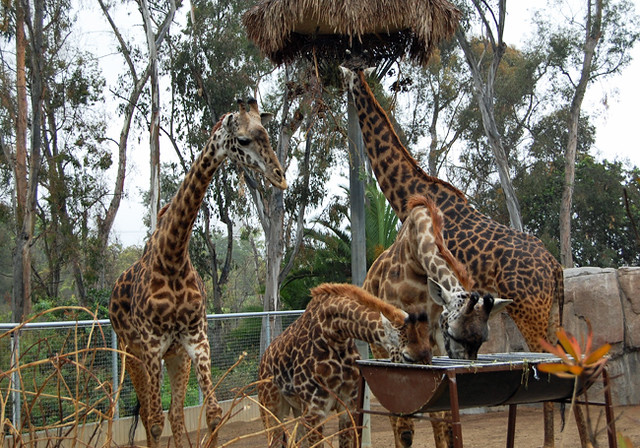 Looking for cheap San Diego Zoo tickets? Of course you are! The San Diego Zoo is in a class by itself. It’s widely regarded as one of the best zoos in the country, if not the world.

The zoo is huge, with aerial trams and shuttle buses available to move visitors around. Give yourself plenty of time. I ended up spending more than four hours walking around the place and catching glimpses of some of my favorite animals, and I still didn’t see everything.

The San Diego Zoo is super expensive. As of 2022, basic adult admission is $67, and kids don’t even get much of a discount, as they are charged $57. But there are way you can find cheaper admission. Read on for the best strategies!

As noted, standard admission at the zoo is $67 for adults. This includes admission to see the animals, as well as their Guided Bus Tour, Kangaroo Express Bus, Skyfari Aerial Tram, and regular shows. 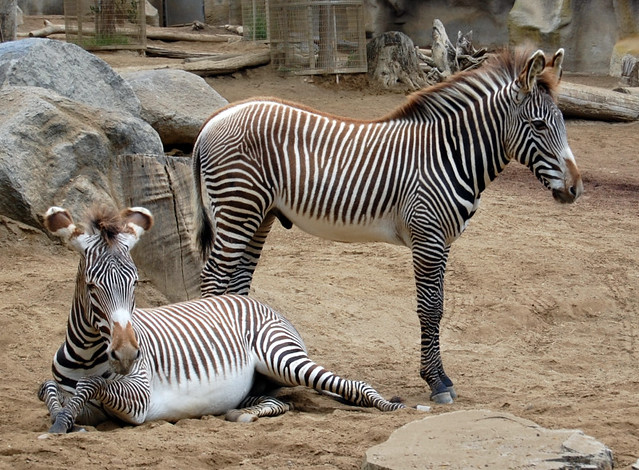 On the zoo’s website, you’ll find all sorts of package discounts and special deals. For instance, you can get a 3-for-1 pass that includes admission to the zoo, safari park, and Sea World, for $154 total. There are lots of other good deals for repeat visitors, but they are only valid for locals who have a zip code between 91900–92899.

Sometimes, their prices are exactly the same as regular zoo prices, but on other occasions, they are able to offer discounts. So you’ll want to keep checking that site before your visit to see if you can score a deal.

The benefit of ordering from a place like Theme Park Center is that you can secure your tickets in advance and skip the ticket booth when you reach the zoo.

Active duty military with proper ID receive totally free admission, while spouses and kids get a discount (reportedly 10% – check at the ticket booth for current info.)

Airline and cruise employees can get a 10% discount on a 1-day pass with proper ID. Costco also sometimes offers zoo discounts for its members.

What about seniors? As of this writing, there is a senior discount available. The 10% off senior ticket must be purchased right at the zoo front gate and cannot be ordered online.

If you’re coming with kids, the ultimate way to score cheap San Diego Zoo tickets is to wait until October. For the entire month, kids under 12 get in free. Expect big crowds during these days, but you’ll save a ton of money by coming that month.

PRO TIP: To save money on expensive food within the park, you can always bring your own sandwiches and lunches. It’s totally fine to bring your own food items with you inside the park – just no coolers, glass bottles, alcohol, or straws. The zoo also allows re-entry if you want to leave and eat somewhere else.

By the way, the zoo does have storage lockers for rent, starting at $8. The largest lockers are 18 x 27, which means you could fit a carry-on sized suitcase in there if needed. There’s a separate storage area at Front Street Rentals where you can store even larger suitcases than that (no size limits) for $15.

Backpacks are allowed inside the zoo, but drones are not. Leave those flying camera machines at home!

Animals You’ll See at the Zoo

The San Diego Zoo is known for being one of only four zoos in America that houses giant pandas. These endangered animals are notoriously hard to breed in captivity, but San Diego has had more success mating pandas than any other U.S. zoo. 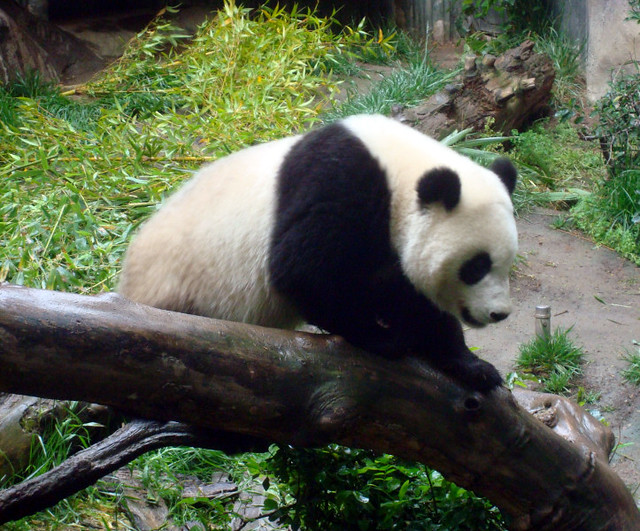 Unlike some of the other animals, the pandas were very active. The little panda did a lot of running around. 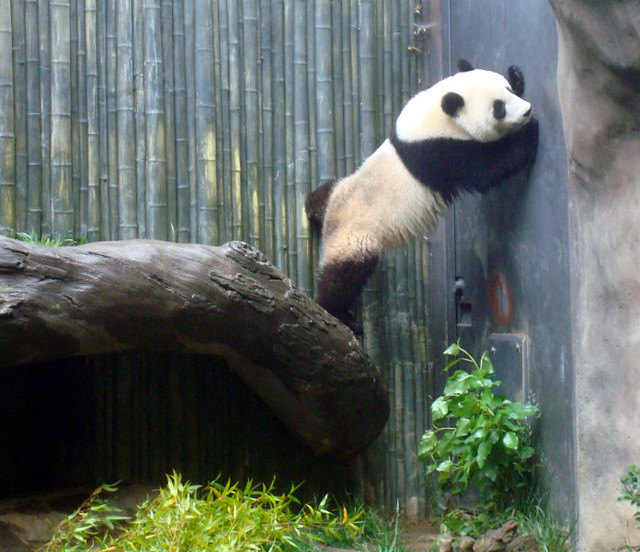 Here’s my favorite animal in the world: The komodo dragon! This is one of the few creatures in the world that will sometimes eat humans if given the opportunity.

They eat the entire body, bones and all, leaving no trace of life. I love their ruthless, no-nonsense attitude. 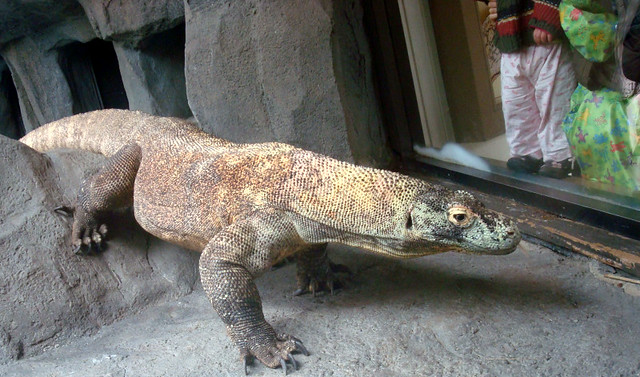 The cute and cuddly koalas. Mitch Hedberg has a koala joke: “My apartment is infested with koala bears. It’s the cutest infestation ever. Way better than cockroaches. When I turn on the lights, a bunch of koala bears scatter. And I don’t want them to. I’m like, ‘Hey, hold on, fellas! Lemme hold one of you. And feed you a leaf.'” 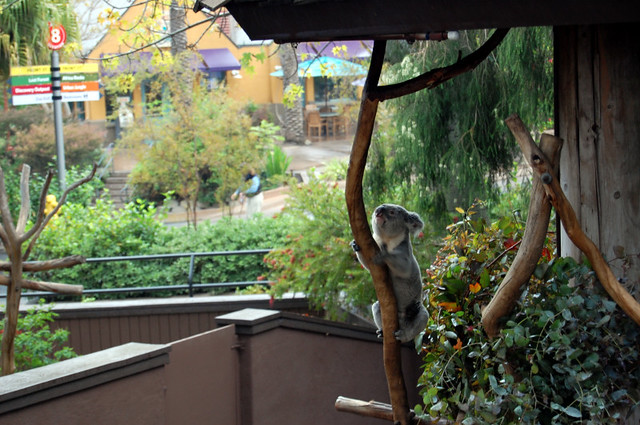 Frequently asked question: Can you hold a koala at the San Diego Zoo? Nope, sorry. Koalas have sharp claws and they are too dangerous to hold. The zoo does not allow visitors to hold or pet any animals, outside of the petting zoo. 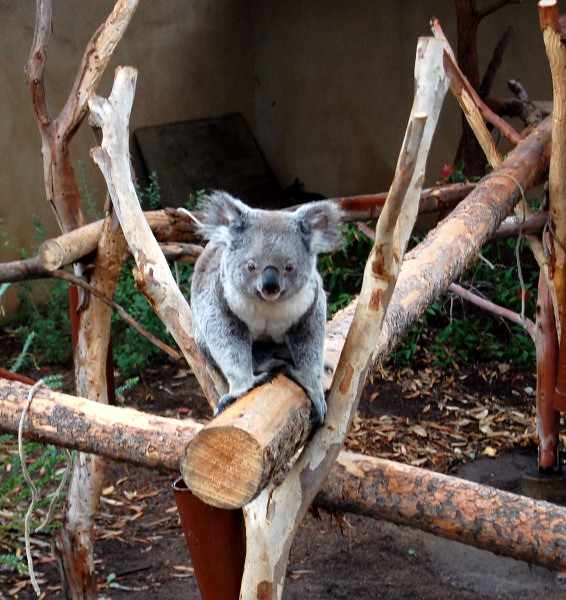 Something draws me to the South American capybara, the largest rodent in the world. Look at those adorable flat noses. 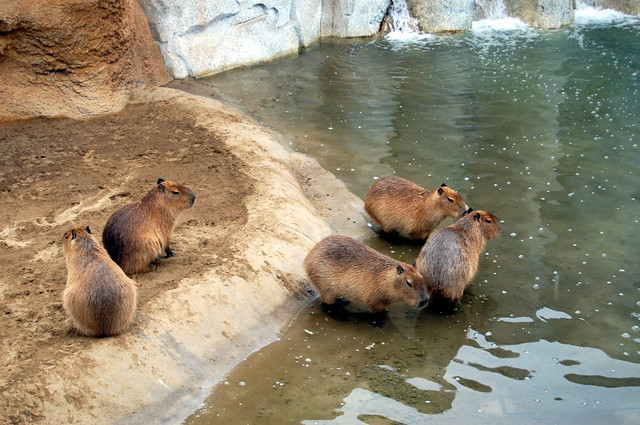 Speaking of flat noses, I present to you the bearded pigs. 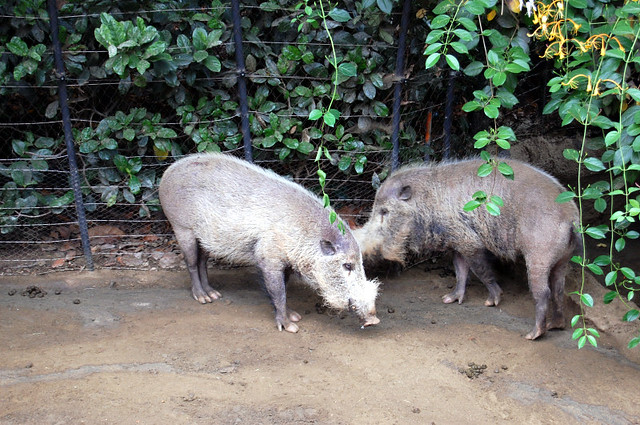 The living desert of Madagascar provided some visual context for the environment that some of these animals are living in. 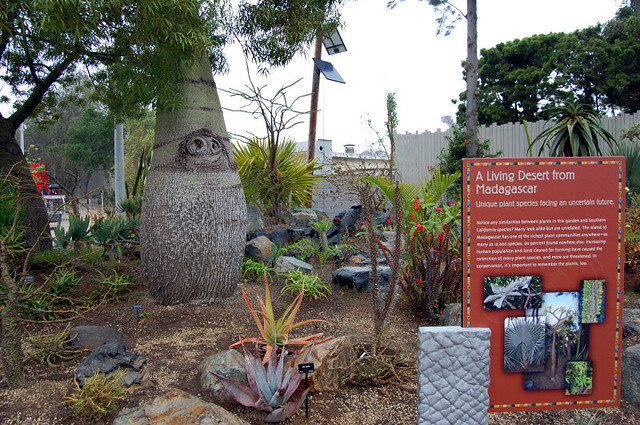 Bears! Black ones and brown ones. I’ve seen bears in Yellowstone, but never this close up! 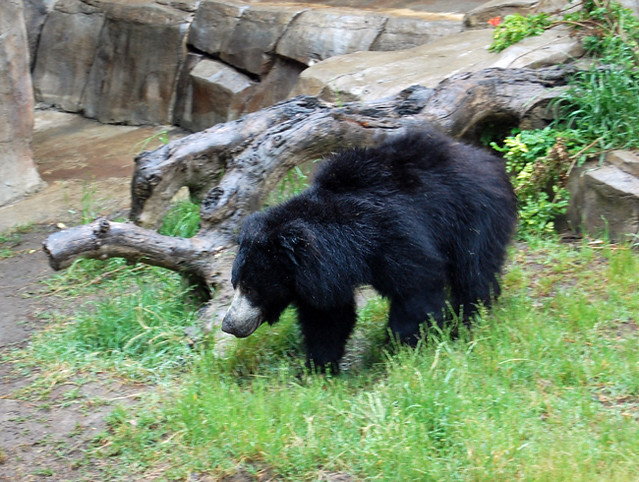 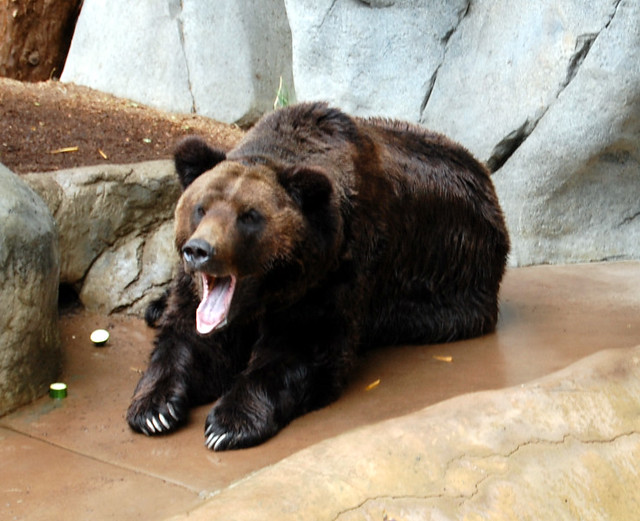 The kids especially enjoyed the primates. 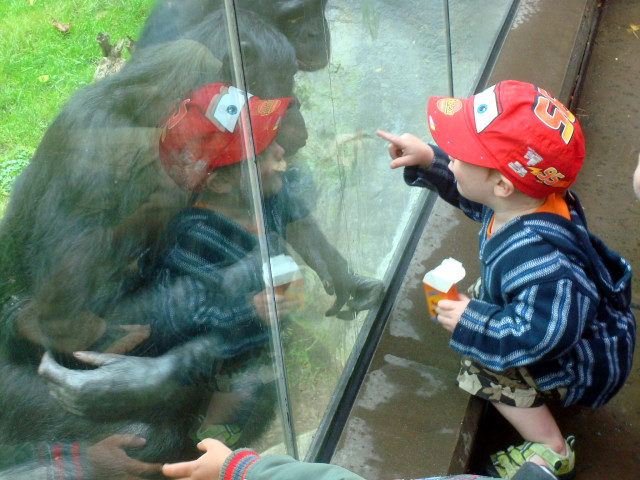 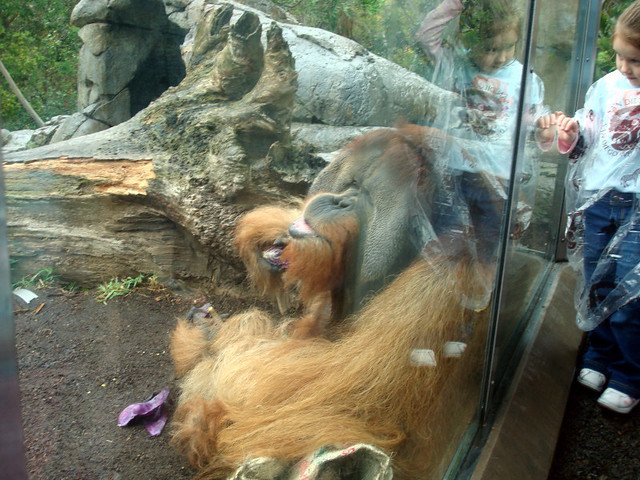 It was in the upper 50s and raining the day I visited. Poor monkey… someone get her a jacket! 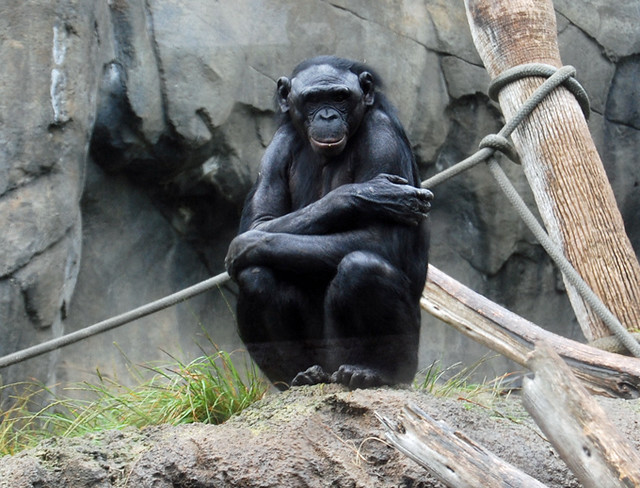 Who doesn’t love the giraffes? 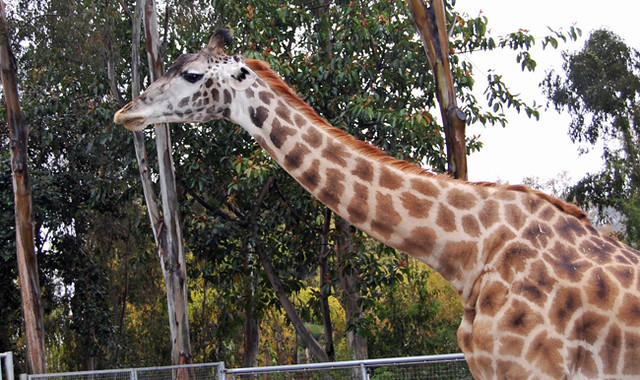 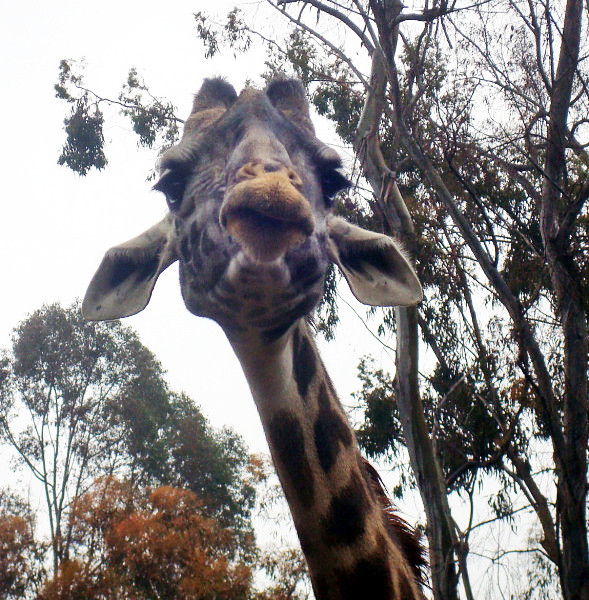 Fun fact – I once got to kiss a giraffe on the lips at the Giraffe Centre in Kenya.

Back to the unusual animals. This small African antelope is called a klipspringer. The sign indicated that these guys can jump ten feet in the air from a dead standstill. They jump across boulders and ledges to escape their many predators. They also mate for life, making them perhaps the most monogamous mammals in the world.

They’re really cute too. I want a pet klipspringer. 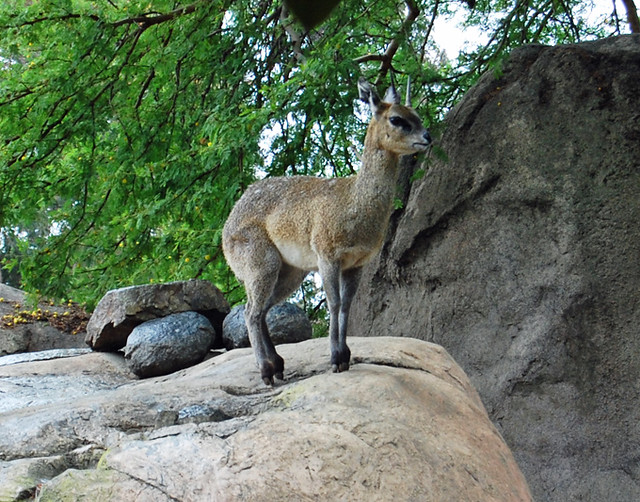 The guanaco is similar to a llama. Go ahead and chew that grass with your freaky jaw! 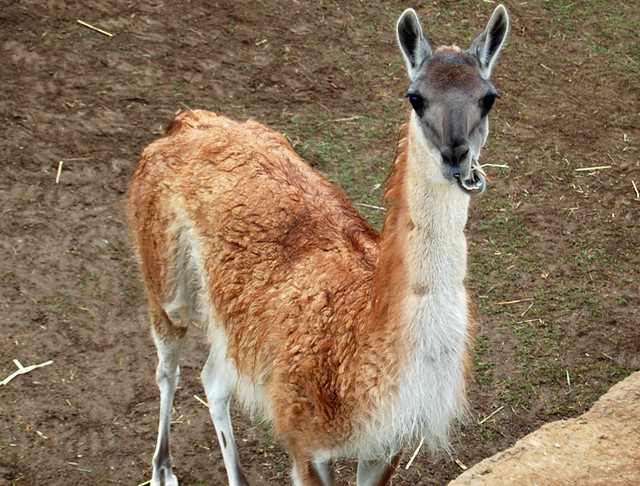 The peacock shows off his plumage. 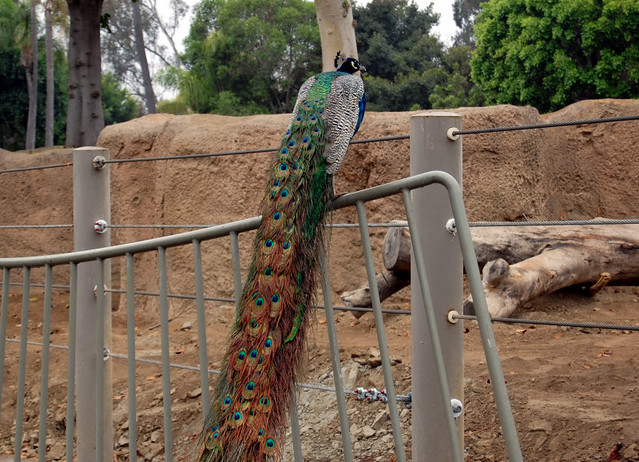 Back to the big boys. The polar bears in the San Diego Zoo are smaller than most polar bears, but they’re still pretty massive. 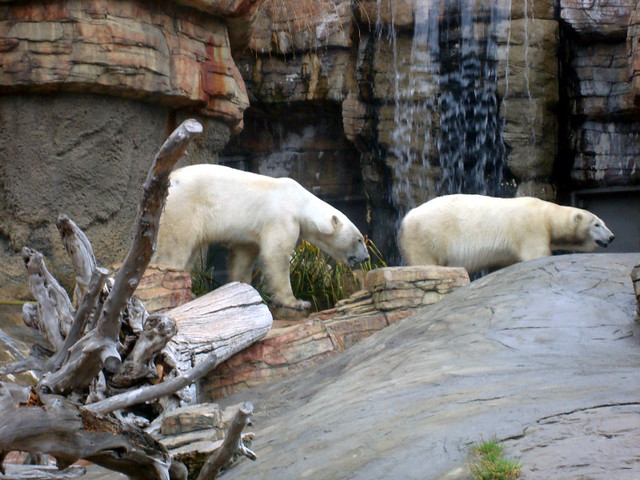 I once hiked with rhinos in Zimbabwe. At the San Diego Zoo, the rhino was the one animal I felt bad for. They didn’t seem to have much room to roam. Two of them shared this tiny pool of water.

The hippo had significantly more water in his tank. He liked rubbing up against the windows where the tourists stood to watch. 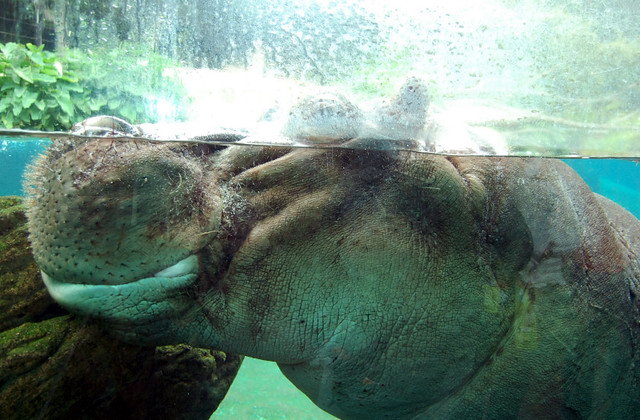 Thanks to Fergie, I cannot see camels without hearing “My Humps” in my head. Look at those lovely lady lumps. 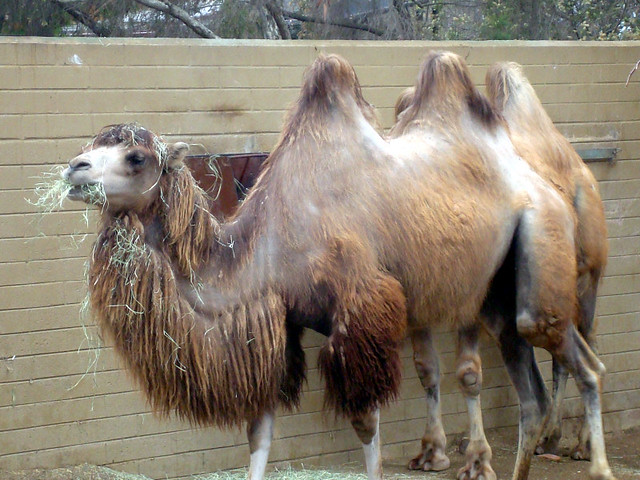 The elephants kicked up dust on themselves. 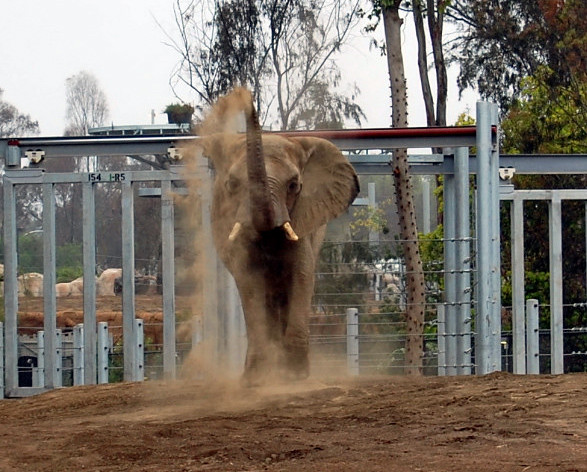 I always get excited for tigers in zoos, but they never seem to be doing anything but sleeping. Lazy cats! 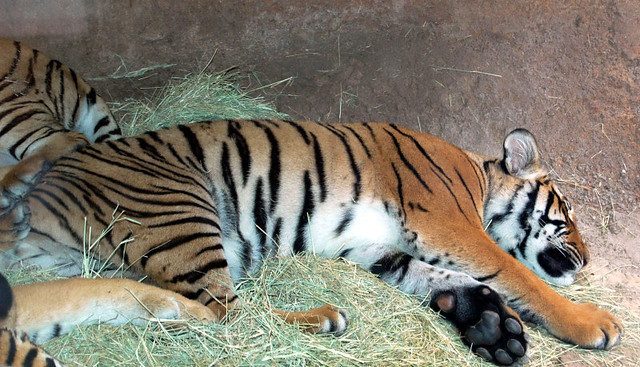 Get your discounted San Diego Zoo tickets and have fun! What’s your favorite zoo animal?