If you’re heading into Great Smoky Mountains National Park on the Tennessee side, you’ll most likely pass through towns like Sevierville, Pigeon Forge, and Gatlinburg, which all have their own wacky character.

These can be fun places to stop and visit, especially if you have kids. What about the other towns near Pigeon Forge? Read on as we share photos from Pigeon Forge and describe some of the other cities nearby.

Note that although the Smoky Mountains straddle the border between Tennessee and North Carolina, we’re not including towns from North Carolina on this list. That’s because they’re a bit further away (90 minutes or more) from Pigeon Forge.

If you care to venture that far, you can find plenty of cool places to visit in the Smokies in NC, including Bryson City, Cherokee, and Asheville. 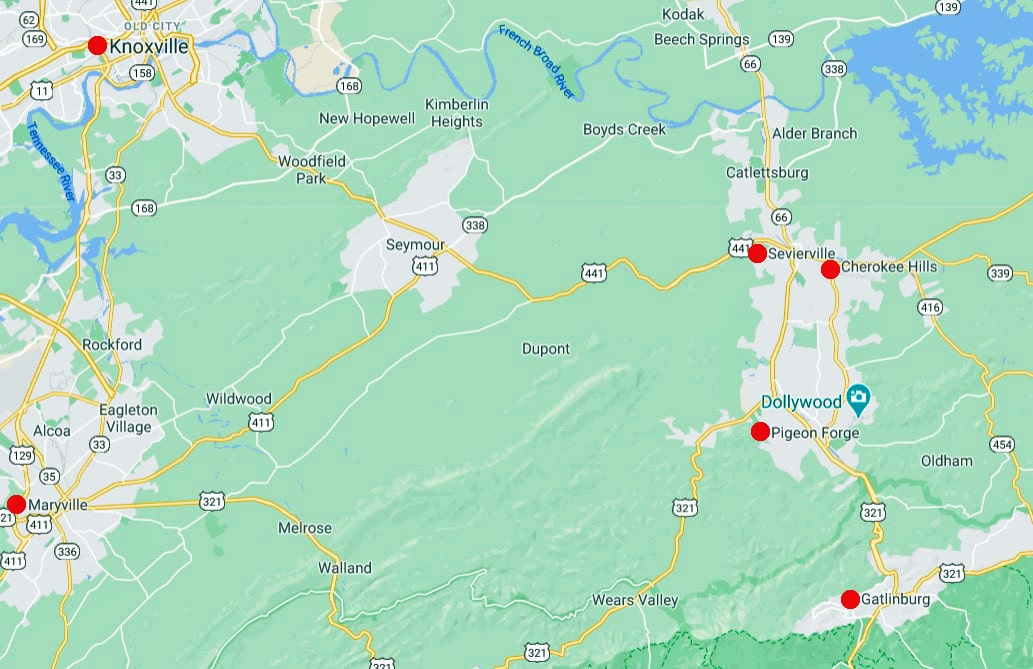 Here’s our rundown of towns near Pigeon Forge, Tennessee that you may want to visit.

Gatlinburg is similar to Pigeon Forge but possesses more of a quaint feel. It has plenty of its own A-list tourist traps like Ripley’s Believe it or Not.

Gatlinburg is located just outside the park boundaries, so it has the hills of the Smokies in the background. It’s scenic and fun! Folks who want a mountain vacation in the Smokies have plenty of Gatlinburg cabins to choose from.

Cherokee Hills is a very small community, but you may pass through it, depending which road you take the enter the Smokies. Here you can find an RV campground, and the Gatlinburg Pigeon Forge Airport is nearby. 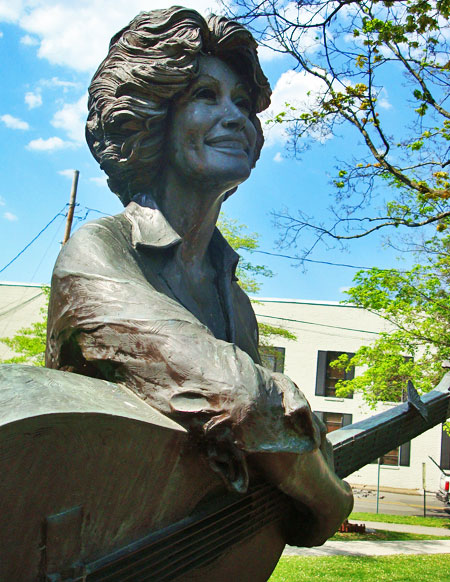 If you don’t have time to stop by and ride the coasters at Dollywood in Pigeon Forge, at least head over to Sevierville to see the Dolly Parton statue at the Sevier County courthouse. Dolly was born here, and she’s an American treasure.

Sevierville has more of an old-school, working-class business district, which I enjoyed exploring. This city has roughly 17,000 residents.

Maryville has a population of around 27,000. But despite its larger number of people, it’s more quiet than Pigeon Forge and Gatlinburg, because it’s a bit off the Smoky Mountain tourist trail.

Besides its beautiful scenery in the foothills of the Smokies, attractions here include Cades Cove Museum, Bicentennial Greenbelt Park, and Sam Houston Historic Schoolhouse.

The biggest city in the immediate vicinity of Pigeon Forge is Knoxville, which is less than an hour away. Knoxville is home to the University of Tennessee and all sorts of other attractions, restaurants, and businesses. You may want to stay here if you’re planning a visit to the Smokies.

Pigeon Forge itself is a town of strip malls and strange businesses. Its current population is roughly 6000 people, though it obviously attracts way more than that during the summer tourist months.

Here’s one of the coolest (weirdest) looking buildings in town: an attraction called Wonderworks. The building has been designed to look like the entire structure is upside-down.

The streets of Pigeon Forge are full of kooky attractions that some families may be interested in. I was content to drive past and admire the entrepreneurial spirit. 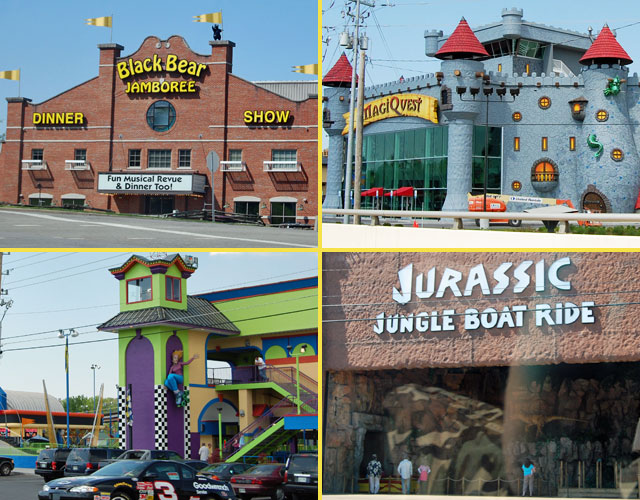 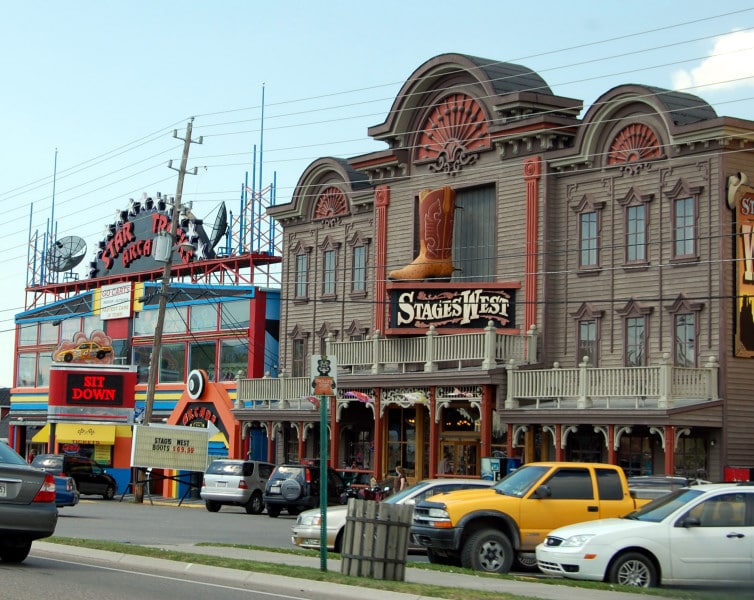 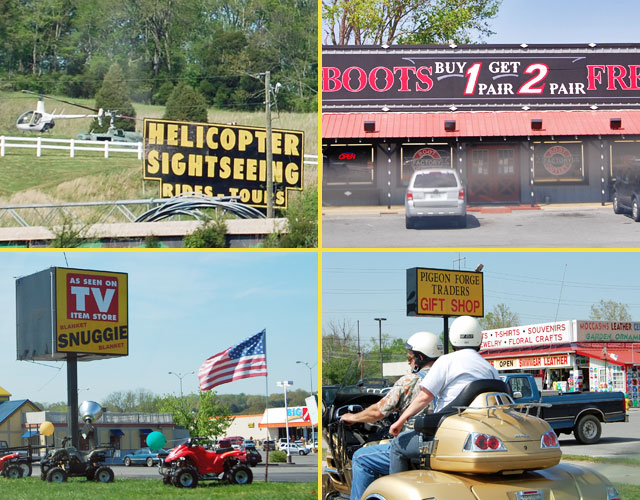 Here’s the best vehicle I spotted in the area. ‘Merica. 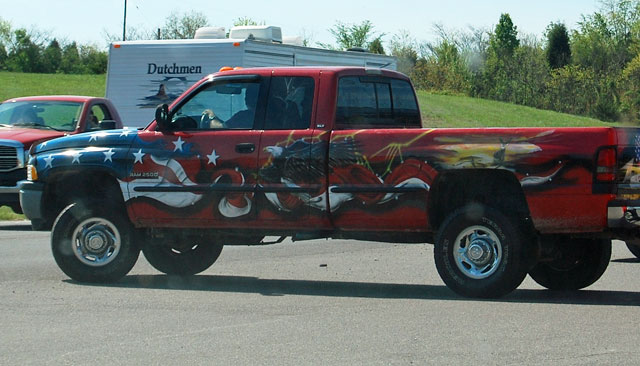 What’s your favorite of the towns near Pigeon Forge, Tennessee?