Pittsburgh is a sports town. You can see it in the streets. And every fan in Pittsburgh is everyone you meet.

That’s a line from the old Iron City Beer commercial, and it perfectly captures the mood of the Steel City. From grandmothers to little kids, from Highland Park to the South Side, the entire city gets behind its Steelers and Penguins (and sometimes Pirates.) In how many cities is the local football team always the lead story on the 6 pm newscast? Even for regular season games?

Aside from possibly Boston, there isn’t another city in the U.S. that so rabidly supports its teams. And fortunately, they’ve had a ton of great teams to support. With six Super Bowl trophies, five Stanley Cups, five World Series titles, and one college football national championship, Pittsburgh has earned its nickname “City of Champions.” 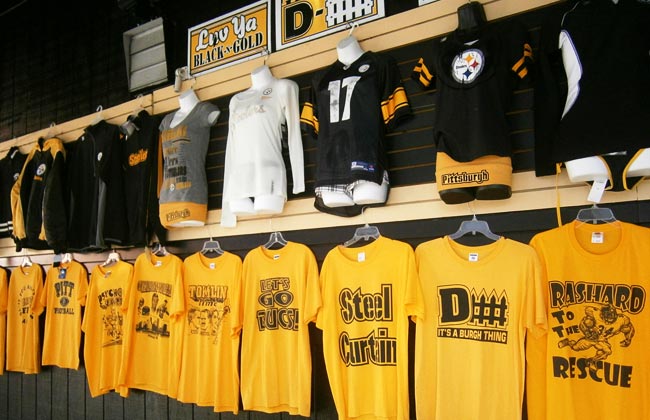 The sports teams foster a great sense of community. Go to a mall on a Sunday during a Steeler game and it will be deserted, because everybody’s home watching the game. There’s a lot to be said for that “we’re all in this together” sense of community.

Believe me – Chicago doesn’t have it, and neither do most other cities. Even the fact that all three teams wear black and gold creates a sense of community among sports teams that other cities can’t match.

I was recently walking through downtown Pittsburgh on a Friday morning, and the number of Steeler jerseys I saw on the streets was crazy. I’d forgotten that in the Steel City, office employees are always allowed to dress-down on Fridays by wearing Steeler jerseys to work. It brought a huge smile to my face, this level of devotion that I haven’t seen anywhere else.

Pittsburgh is the City of Champions 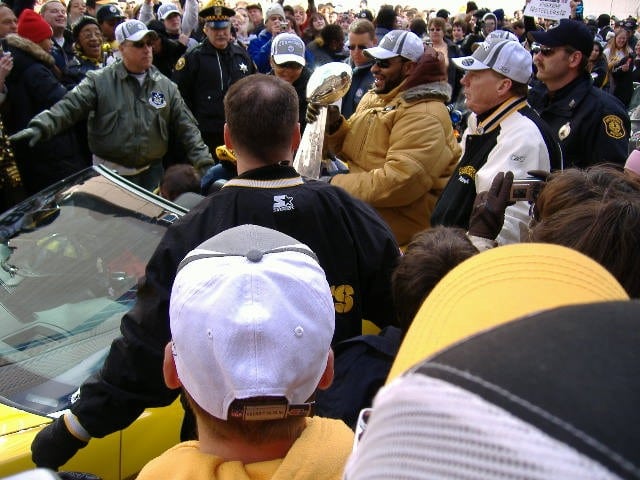 Three years later, fans packed every floor of a parking garage to get a look at the 2009 Steeler victory parade downtown: 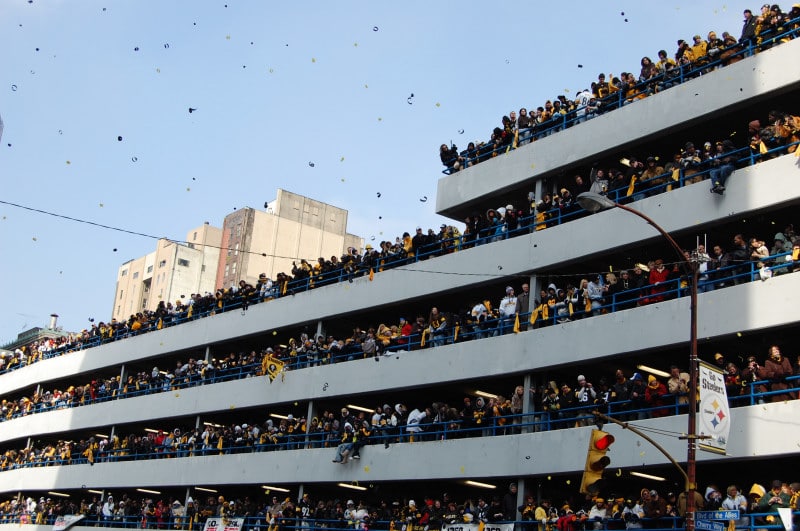 If you go to the Strip District on a weekend morning, you’ll catch the city’s biggest open-air market. It feels like half of the stores sell nothing but Pittsburgh sports merchandise.

And it’s not just the Steelers who get all the love. The Penguins have sold out every game for a few years now, with Sidney Crosby and Evgeni Malkin representing the best young core in the NHL. The Pitt basketball team is a perennial national force and Big East championship contender.

Even the pathetic Pirates get some love. After an American professional sports record of 20 straight losing seasons, the baseball team broke through with three playoff berths in a row, starting in 2013. But they didn’t manage a single series victory, and now they’re back to losing again. Still, the team still draws well thanks to PNC Park, which is still considered the nicest baseball park in America, more than 20 years after it opened.

Outside the park are statues of Pirate greats Roberto Clemente and Willie Stargell, as well as a statue that captures the most famous home run in World Series history, when Bill Mazeroski’s bottom of the ninth homer gave the Bucs a massive upset of the Yankees in the 1960 World Series:

A city so rich in sports heritage and tradition needs a proper museum, and the City of Champions has that with the Western Pennsylvania Sports Museum, which takes up portions of two floors of the six-floor John Heinz History Center. 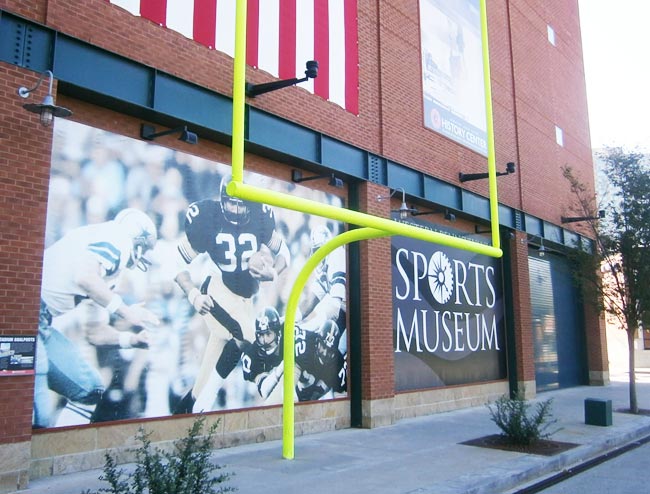 This museum is best described by simply listing its many artifacts and exhibits. The collections change frequently, but when I last visited, the sights included:

-Jerseys and sticks used by Mario Lemieux and other Penguin heroes
-First base from Game 7 of the 1960 World Series, in which the Pirates defeated the Yankees
-Exhibits honoring local wrestling, boxing, auto racing and high school football legends
-Super Bowl rings, tickets and memorabilia from each of the Steelers’ six championships
-Interactive exhibits for kids to throw footballs and putt golf balls like the pros

They also had a collection of trophies won by Lemieux, including one of his Conn Smythe Trophies for being the MVP of the playoffs: 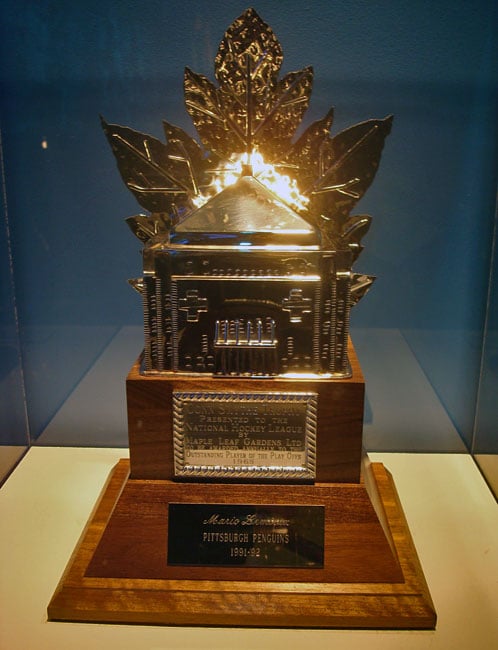 If you ever make it to Pittsburgh, do yourself a favor and attend a sporting event. Or at least watch one with the locals at a bar or the nearest Primanti’s.

If you do plan to go to Heinz Field, check out our guide to attending a Steelers game first. It will tell you everything you need to know about tickets, parking, hotels, and other things to do in the area. And for something more global, consider swinging over to check out the Nationality Rooms at the University of Pittsburgh’s Cathedral of Learning while you’re in town!

11 thoughts on “The Unmatched Sports Culture of Pittsburgh, the City of Champions”