The most iconic trophy in sports is surprisingly accessible. It may be hard to get your hands on a Super Bowl or World Series trophy, but the Stanley Cup is right out in the open at the Hockey Hall of Fame in Toronto – at least when it’s not being shipped off to an arena to be awarded to a championship team on the ice.

And it’s totally within reach – feel free to step up and get your Stanley Cup selfie. 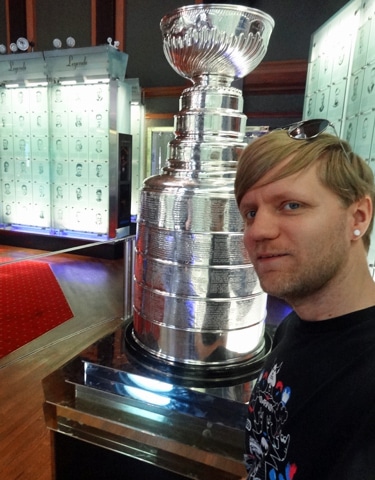 When I walked into the large hall in which all the major hockey trophies (Conn Smythe, Hart, Vezina, etc.) are displayed, I noticed a Hockey Hall of Fame photographer standing next to the Cup. Oh no, I thought – she’s there to make sure that no one gets a picture of the Cup unless it’s her official photo, which costs money.

But it turns out that despite the official photog presence, visitors can still snap their own pics. You have to hand it to the Canadians for being so darned nice and having a guest-friendly policy.

Visiting the Hockey Hall of Fame 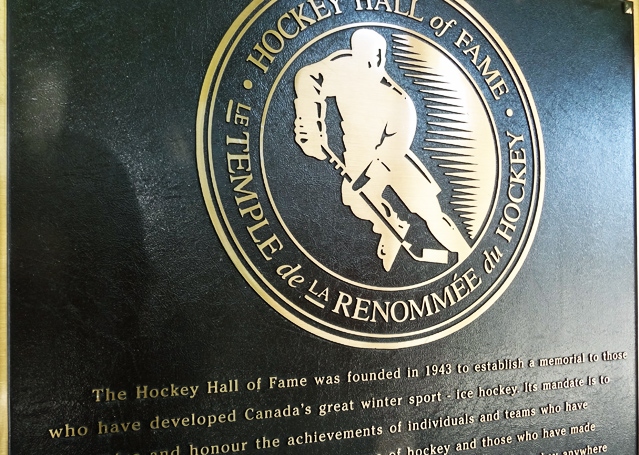 The Hall of Fame is huge and has a wide range of sights and activities. First off, there’s the usual artifacts from throughout hockey history, like worn jerseys, sticks, goalie masks, and pucks from important moments in history.

I had to stop by the exhibit of Mario Lemieux, my favorite athlete of all-time. Among the Lemieux display items are the stick he used to score six points in the 1988 All-Star Game, and the box of Corn Flakes he appeared on after the Penguins won their second Stanley Cup. 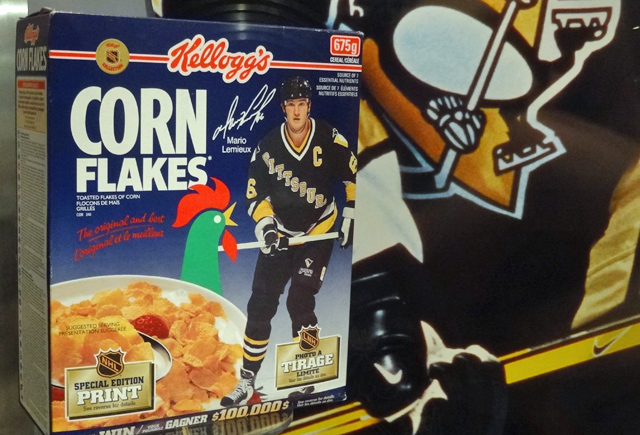 I loved this display of jerseys of defunct NHL teams. This old Colorado Rockies jersey is pretty sweet, and the Hartford Whalers uniform is a classic too. 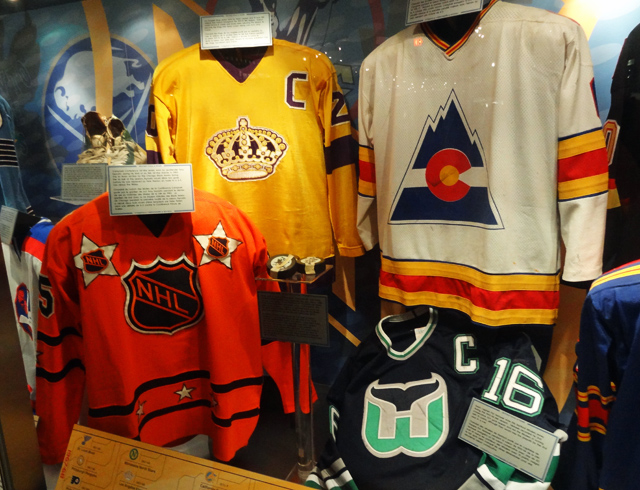 How often do you get to see a Thailand or Iceland ice hockey jersey? These jerseys came from the 1998 world junior champsionships. The Thai team got outscored 217-3 in the tournament, losing one game 92-0. Yikes. 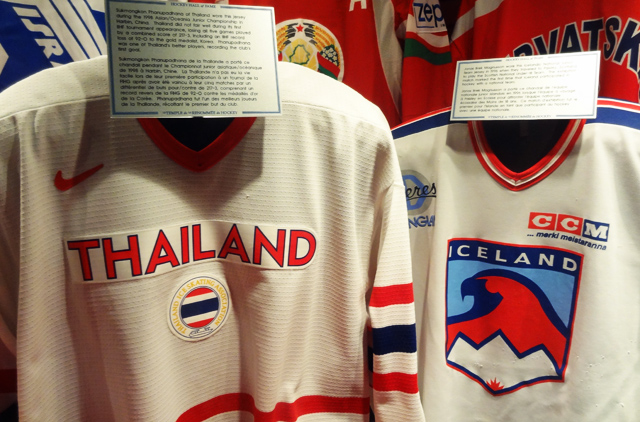 Photos of winning moments abound, like this shot of the LA Kings taking the Cup in 2012. 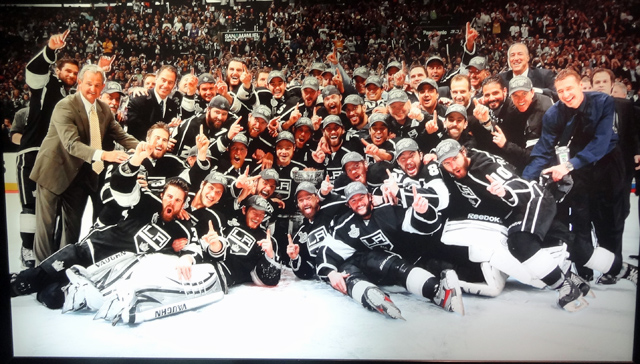 There’s a big section devoted to interactive exhibits, like a booth where you can play announcer and broadcast part of a hockey game.

Here’s a re-creation of an old Montreal Canadiens locker room. You can walk around and make yourself part of the team. 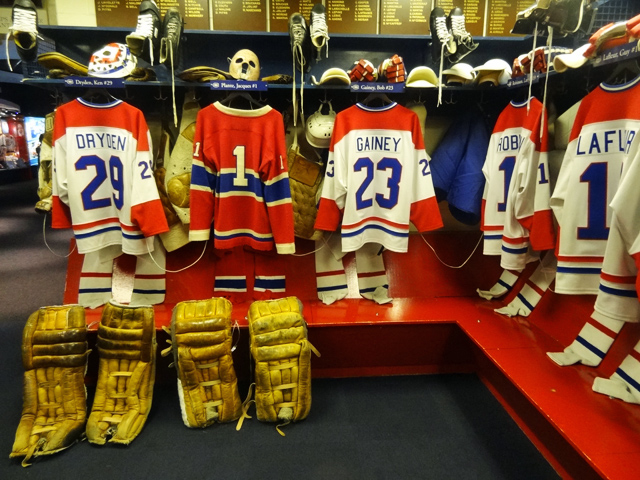 In one game, fans can play goalie and try to stop pucks coming at them. I wanted to play since I’ve always felt I would be a great goalie, but there were too many kids in line so I had to defer to the young’ns. 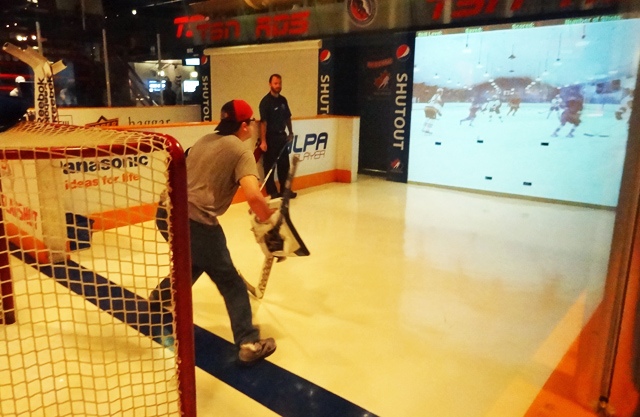 Even with all the games, there’s nothing like seeing the iconic trophy. Behold, the Stanley Cup! 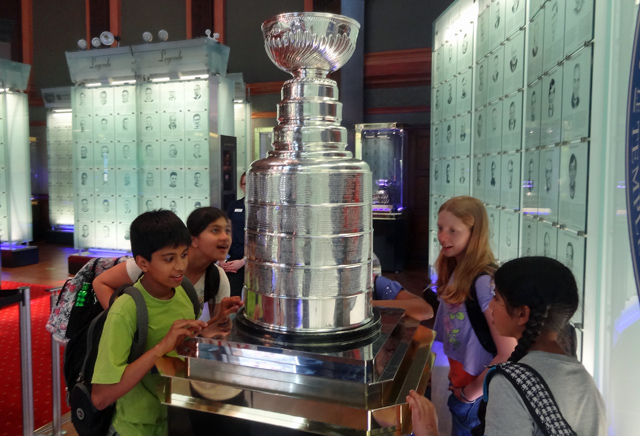 One thing that separates the Stanley Cup from other sports trophies is that the name of every player on every championship team gets engraved right into the Cup. You can look back at the winners from past years and pick out your favorite players and teams (Hello, 1992 Pittsburgh Penguins.) 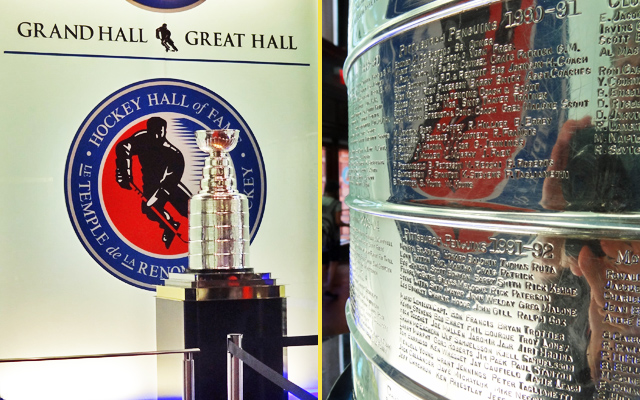 And don’t forget about the U.S. Hockey Hall of Fame in Eveleth, Minnesota, which focuses solely on American hockey players!

Hockey Hall of Fame parking is tricky since this part of Toronto is dense and busy. There’s no official parking lot at the Hall. They recommend parking at the garage at Brookfield Place,, which has entrances on Wellington and Front Streets. These are paid lots, and you can expect to pay at least $20/hour here. Yeesh! You’re better off taking public transportation to get down here.