Any music fan knows the iconic lyric, “Well I’m standin’ on a corner in Winslow, Arizona / Such a fine sight to see / It’s a girl, my Lord, in a flat-bed Ford / Slowin’ down to take a look at me.”

It’s a line from the Eagles’ first #1 song, “Take it Easy,” from 1972. In honor of the lyric, the town of Winslow created a small public park right on a street corner on Old Route 66, and it’s a hugely popular tourist attraction.

Anyone doing a Route 66 road trip will want to stop by this park when passing through Winslow. Here’s what you’ll see when you’re standing on that famous corner!

History of the Song and the Park

“Take it Easy” is one of the most popular classic rock songs that still gets played on the radio to this day. It’s a great addition to any playlist of the best driving songs.

The song was the very first single for the Eagles, who went on to score 18 Top 40 hits and become one of the most successful rock bands of the 1970s. “Take it Easy” peaked at #12 in 1972 but has endured much longer than most other songs which fall short of the Top 10. 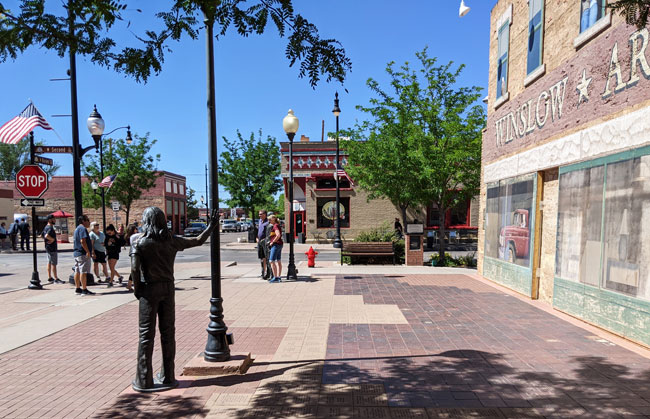 Jackson Browne started writing the track for his own debut album, but ended up finishing it with the Eagles’ Glenn Frey. Frey’s band loved it and put it on their record.

There’s debate over whether Browne was actually standing on a corner in Winslow or in Flagstaff, Arizona. Browne says he was stranded in Winslow, but acknowledged that the town where Frey saw the girl in the flatbed Ford was Flagstaff. Frey changed it to Winslow for the song. “Winslow” flows a lot better in the lyrics than “Flagstaff,” don’t you think? 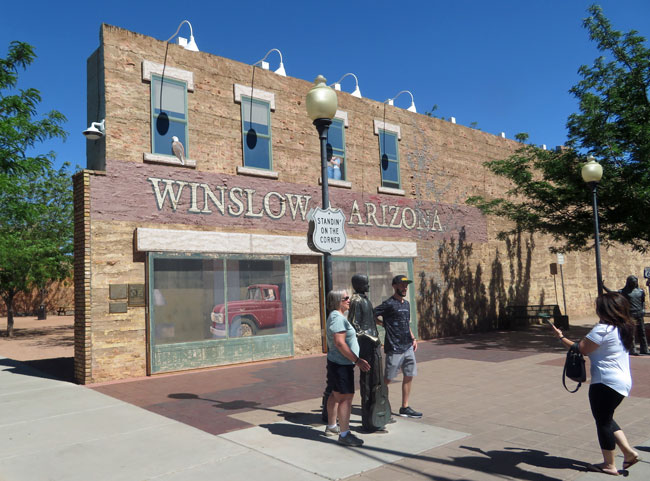 Winslow, Arizona was a bustling town in the ’70s, and it was located right on Route 66. But then I-40 was built, and it routed around downtown Winslow, meaning the town lost a ton of visitors.

No word on why they chose Standin’ on The Corner Park rather than the actual lyric of Standin’ on A Corner.

Visiting Standin’ on the Corner Park in Winslow, Arizona

Located at the intersection of W. 2nd Street (Old Highway 66) and N. Kinsley Avenue, the park opened in September 1999 and features a road sign reading “Standin’ on the corner” and a statue of a guy with a guitar.

People often assume the status must be one of the Eagles’ singers, but it’s not. Sculptor Ronald Adamson made the statue to look like his son.

The idea was just to have a random dude standing on the corner because, hey, that’s what the song says! Some people think the statue vaguely looks like Browne, and you can kinda see the resemblance. 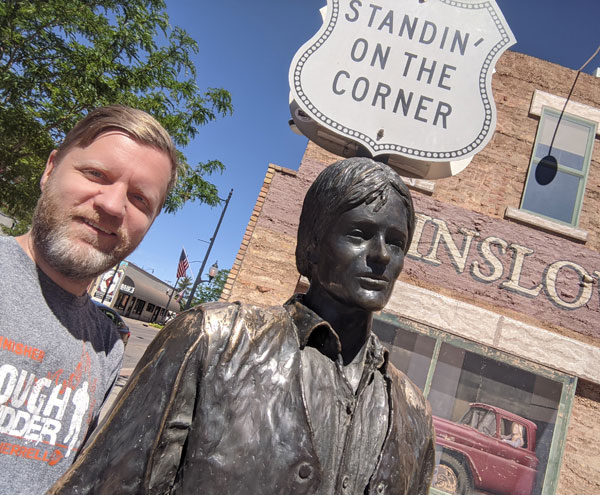 There’s also a mural on the brick wall with the giant words WINSLOW ARIZONA. The flatbed Ford from the lyrics make an appearance on the mural, and sure enough, there’s a young woman behind the wheel.

In 2004, the building with the mural caught on fire, ruining most of the building. It was demolished entirely in 2006, except for the mural wall itself, which remains.

In 2016, a statue of Eagles singer Glenn Frey was added to the park. Sadly, the statue wasn’t commissioned until after Frey’s passing. Two radio DJs from Phoenix classic rock station KSLX (Mark Devine and Paul “NeanderPaul” Marshall) helped spearhead the effort to raise money to add the statue.

The statue of Frey was made to capture his ’70s look, so he has long, shoulder-length hair and a mustache. He’s wearing bellbottom jeans and a tight tshirt that reads “Song Power.”

Frey joins a number of other rock and roll legends who have their own statues, like Jimi Hendrix in Seattle, Elvis Presley in Hawaii, and another Elvis statue in Shreveport, Louisiana.

You may also find vehicles parked nearby which tie into the theme. There is often a 1960 red flatbed Ford parked on the street next to the park, which only adds to the vibe.

And you’ll see a giant “Arizona Route 66” logo in the middle of the street at the intersection. 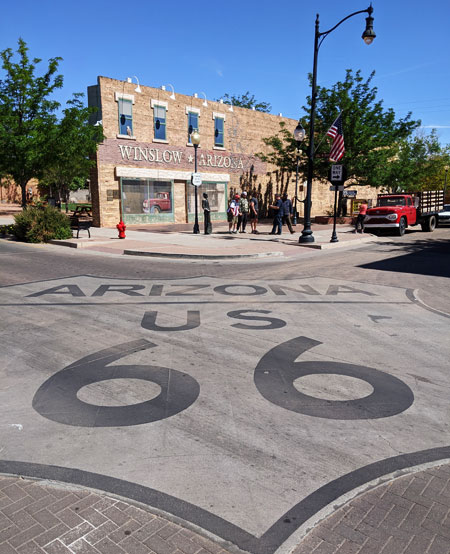 And the park itself has a “Route 66 Roadside Attraction” sign explaining when the park was formed and why. 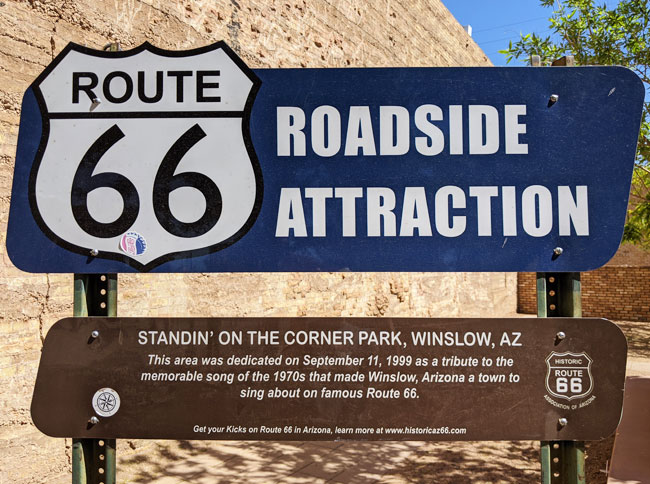 Jackson Browne himself has visited the park several times. The first few visits were brief stops during the middle of the night, Browne has said, while his tour bus was passing through town between cities.

In 2013, though, Browne performed his first concert in Winslow and got to see the park during the day. How cool would it have been to witness that? He played in front of a crowd of about 200 and sang his classic hits, plus “Take it Easy,” of course.

There’s no record of Frey ever making the journey here.

I visited on a weekday summer morning, and there were probably 15-20 other visitors during the 15 minutes I was there. So you may have to wait in line to get your selfies with the statues. The park is mostly in the sun, but there is a small shaded area near Frey’s statue.

In the immediate area of Standin’ on the Corner Park, you’ll see gift shops galore at the intersection. These shops sell souvenirs related to the song, the park, and famous Route 66. Stop in and give some dollars to the local businesses of Winslow! 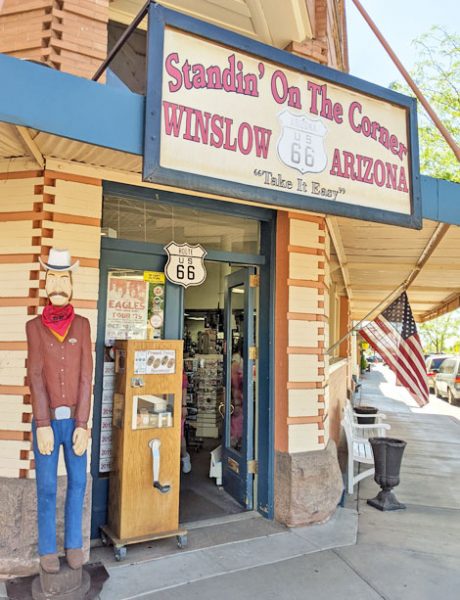 If you want to come to Winslow during the biggest party of the year, make the trek in September during the annual Standin’ on the Corner Festival.

The event features live bands, food trucks, a beer garden, raffles, horseshoes, and more. It’s estimated that at least 100k people visit this park each year, and a large number of those come during the festival.

Where to Stay Near Winslow, Arizona

La Posada. If you plan to stay in Winslow, La Posada is by far the coolest option. It’s a historic hotel, built in 1929 next to the Winslow train station. In its time, it was considered one of the most opulent hotels around, and it’s been renovated to retain its quality and charm.

Rodeway Inn. For budget lodging, try the Rodeway Inn, located at the western end of town. It’s affordable, and it’s a short walk from the “Welcome to Winslow” sign, so you can get a cool selfie.

Best Western Plus. The Best Western is a typical chain hotel situated at the eastern end of town, right by I-40 and across the from Flying J travel center.

Other lodging options in Winslow include the Quality Inn and Motel 6, just off I-40.

Other Nearby Attractions & Route 66 Highlights

In addition to the gift shops on the corner of W. 2nd St. and N. Kingsley previously mentioned, what else can you find in Winslow, Arizona?

There’s the Winslow Visitor Center and trading post, where you can get information about the area. The free Old Trails Museum informs visitors about the history of the area, Route 66, and the Santa Fe Railway.

There’s a 9-11 Memorial Garden on the way out of town, right next to the Winslow Bark Park, a dog park where you can let your puppy run wild.

Other nearby attractions include Homolovi State Park and Homolovi Archaeological Site, where you can find the ruins of past Hopi settlements.

Also make sure to visit Meteor Crater Natural Landmark, which is just 25 minutes from downtown Winslow! That’s the spot where a huge meteor slammed into the earth 50,000 years ago. The impact created a perfectly-formed crater that remains intact today.

Other Attractions for a Longer Southwest Road Trip

If you’re on an Arizona road trip, consider checking out national parks like the Grand Canyon, plus the underrated Saguaro National Park and Petrified Forest National Park.

Phoenix has some great outdoor activities. And if you’re driving all of Route 66 from Chicago to California, check out some of the sights from Oklahoma’s portion of Route 66.

Would you like to road trip to Standin’ on the Corner Park in Winslow, Arizona?

10 thoughts on “Quirky Attraction: Standin’ On The Corner Park in Winslow, Arizona”