Visiting the Alamo is a total clusterf**k. I spent around 45 minutes at the historic San Antonio site, and I still have no idea what happened there.

Of course, I know the basics that everybody learns in history class – Davy Crockett, Remember the Alamo, Texas independence, etc. – but I was expecting to hear the full story and leave with a better appreciation for it. That did not happen. 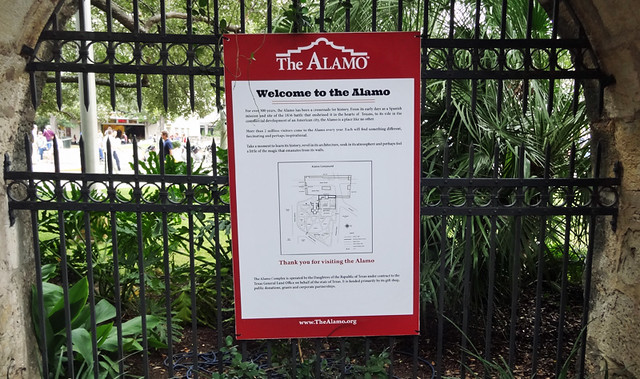 I actually stopped by the Alamo on two separate days and had two equally bad experiences. Hopefully you can learn from this mess and take away some Alamo tips to help with your own visit.

Visiting the Alamo: Day One

I arrived at the rear entrance, which probably is why I was thrown off immediately. I wandered into the Cavalry Courtyard, where a woman was giving a speech about the Alamo to a crowd of onlookers. I wanted to stop and listen, but the problem is that signs were everywhere saying “guided tours $7,” so it was unclear whether this woman’s speech was part of that tour.

It drives me nuts when things aren’t obvious, so this was a big strike. I had to move on or risk being yelled at for trying to get in on a tour I hadn’t paid for. I wandered away and found the main entrance, where everyone was posing for photos.

After going inside, it was impossible to see anything for several minutes, since the inside of the building was very dark and I had just come in from the sunny daylight. There were historic documents in glass cases, but it was difficult to see them, and I couldn’t figure out what they were.

Sure, there were signs that said things like “Land Grant 1832,” but what did that mean? What was the significance of the land grant? What did the land grant achieve? The complete lack of context regarding nearly every exhibit on the Alamo grounds was absolutely maddening.

Before long, I exited the main Alamo building out of frustration. I wanted to come back when I had some clue what I was looking at. I figured I would wander around the rest of the grounds until I learned a little more about this place.

Surely there must be a spot where they give you a proper introduction with historic facts and context, right? I also vaguely recalled seeing something on the Alamo’s website about an “introductory educational video,” so I set off to find it.

Except there was no introduction. No video, no speech from rangers. There was a brochure, but unlike the National Park Service brochures, which are laid out in an easy-to-read style, the Alamo brochure is complicated and unappealing, with dense, long paragraphs in tiny font size that nobody is going to struggle through.

There’s no distinct path or order for visitors to follow, so you’re left to wander around aimlessly. And I sure was aimless. I walked around and observed the cacti and trees, as they were unfortunately some of the most interesting items to be found on the Alamo grounds. 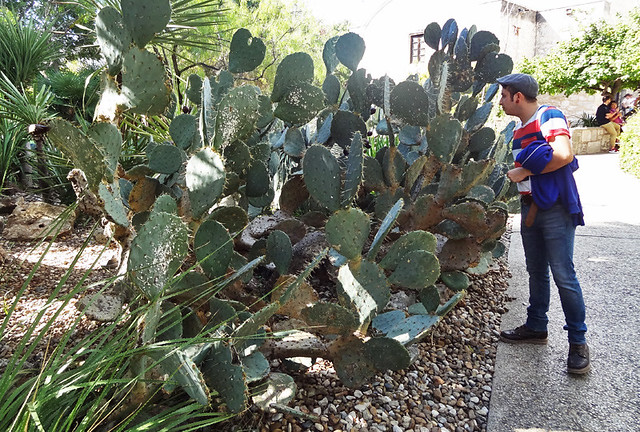 Eventually, I made it back to the courtyard speech I saw upon my arrival, and I now realized that this speech was free and open to anyone. But it ended just as I arrived. I waited for several more minutes for the possibility of the speech starting over, but it never happened. 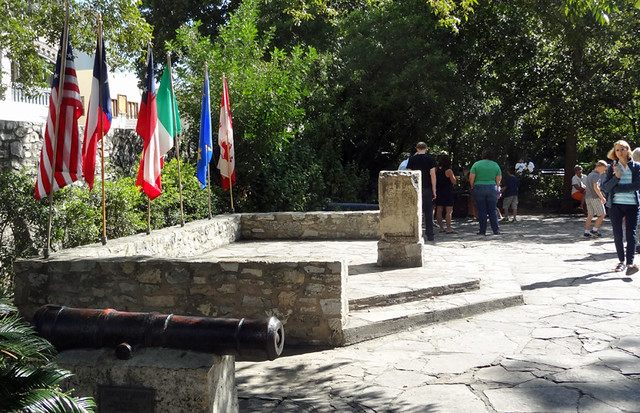 At this point, there wasn’t really anywhere left to go. I walked through the “Long Barrack,” which apparently served as infantry quarters in the 1830s. There were historic items in glass cases here, but, shockingly, many of them had nothing to do with the Alamo. Some were merely fragments of glass and weapons found in the area that dated back to the 1700s.

There were uniforms of Mexican soldiers, but get this – they were replicas. Not even the real thing! Come on, people. This is not some third-rate history museum in a tiny town in the middle of nowhere – this is the ALAMO! How are you going to put replicas on display at the Alamo?!

I was stunned as I continued walking through the room. They had a wall of “Interesting Facts” that weren’t very interesting. The displays consisted of awkward, giant rotating cylinders on the wall that took all of my strength to turn. Kids would never be able to turn these things.

I can’t for the life of me figure out why they would have learning stations that are so user-unfriendly. I would post a photo of one of them to show you just how awful they are, but photos aren’t allowed in that room, another big fail.

The one display that attempted to provide a little bit of useful information was this set of giant educational boards. Unfortunately, they were impossible to read because they way too big and they were placed right next to the busiest sidewalk on the entire property. If you stopped to read them, you’d be the rude bastard getting in everyone’s way. 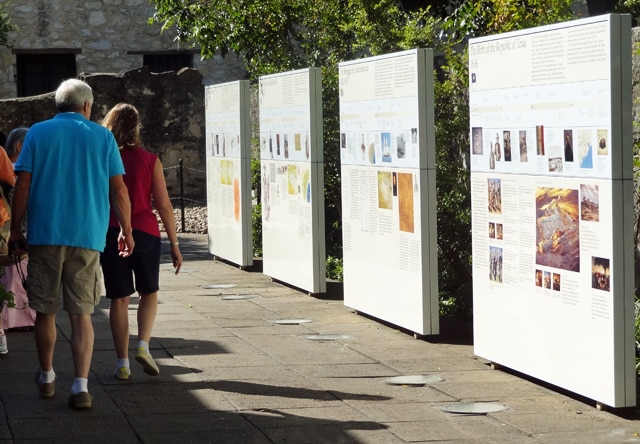 After a quick pop into the gift shop, which I actually enjoyed thanks to its silly toy guns, stuffed animals and authentic Texas food items, I headed for the bathroom on my way out, and even that was a horrible experience. The men’s room consisted of two urinals and two stalls. And that’s the only men’s room on the premises, which means that a grand total of four people can use the facilities at any given time. Four! Keep in mind this is an attraction that draws thousands of visitors daily.

Unsurprisingly, there was a line to use the men’s room. And this wasn’t even a busy day – it was a random Friday morning. I can’t even imagine what the bathroom line must look like during a summer weekend.

All in all, the Alamo may have some amazing history behind it, but I’ll never know. The folks in charge here need to seriously re-examine how they’re doing things, because I walked away stunned, mystified and confused. 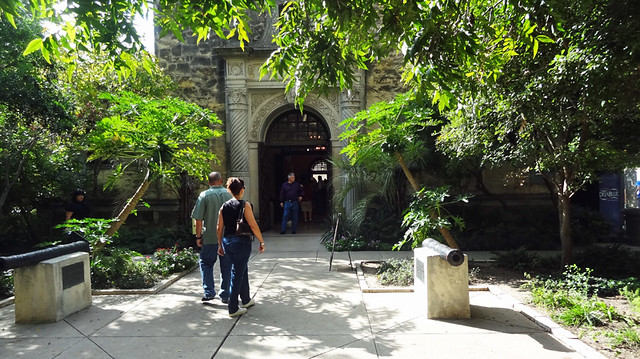 Day 2 at the Alamo

Wait, the story does not end there! Because on my final day in San Antonio, I found myself with about 30 minutes to kill, so I decided to return to the Alamo and give it another chance. Maybe my initial experience was a fluke and things would be better on day two of visiting the Alamo.

I went to stand in line, but it was difficult to tell where the line to enter the Alamo started. Bizarrely, the entrance line was in a different place than it had been three days earlier. The line was now around the side of the building, instead of in front.

It was more crowded on this particular day, so they wrapped the entrance line around the side of the building without posting any signs to make it obvious. And I wasn’t the only one frustrated at the lack of direction and structure.

These comments were all overheard within a 5-minute span. Nobody had any clue what was going on. I was laughing out loud at the chaos and confusion. 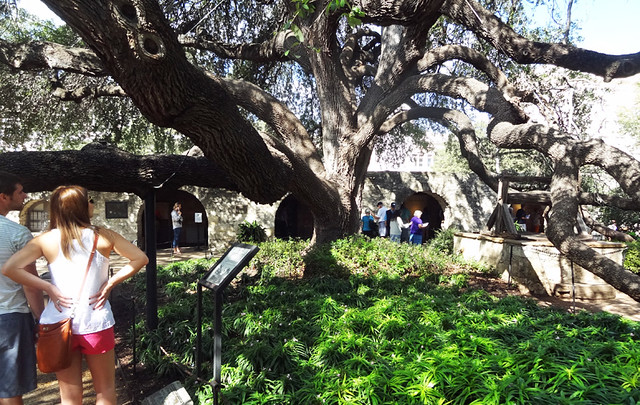 I made it back inside the darkened Alamo, where I saw one man using a flashlight to read the exhibit descriptions. Now there’s a guy who planned ahead! Those of us with normal vision were unable to see much, but the solitary fellow who brought a flashlight had no trouble.

Congratulations, Alamo! This is the reputation you’ve earned! People now know that it’s so impossible to read your displays, they’re bringing their own flashlights!

Alamo tips: Bring your own flashlight if you have a small one. Or use a flashlight app on your phone.

I exited the main Alamo building again, feeling just as lost as I did the first time. Then I walked around some more and stumbled upon a sign that almost knocked me over: 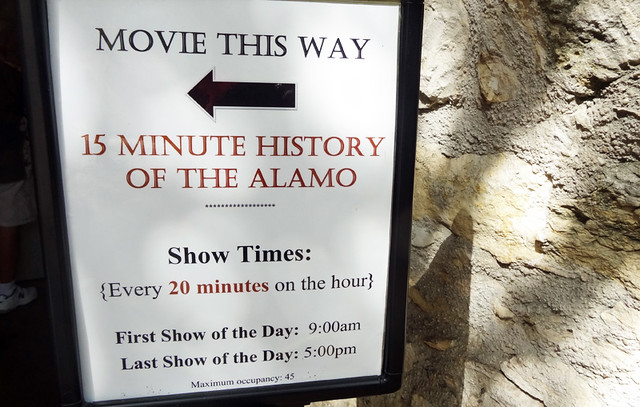 Holy sh**, there’s that introductory video I’ve been driving myself crazy trying to find! It really does exist! I had missed it entirely on my first visit because they hid the little theater way in the corner of the Long Barrack Museum and made no effort to direct visitors there. The brochure, inexplicably, had mentioned nothing about an introductory video in the Long Barrack Museum.

The sign indicated that the video ran every 20 minutes. This was perfect, because my watch read 12:15. That meant the next video would be starting in five minutes and I’d have time to stay and watch. I would finally get my Alamo education!

But then I noticed something else. A handwritten note attached to the sign read, “Next video showing: 12:35.” For some unknown reason, they were ignoring their own schedule and postponing the next showing until 15 minutes after its normally-scheduled start time. Because I had to head to the airport to catch my flight, that delay meant I couldn’t stay to watch it.

Imagine that. I had finally discovered the one place on the entire Alamo grounds where you can actually learn something about the history of the place, but because their movie wasn’t running on schedule, I wasn’t able to view it. The Alamo had screwed me over one last time.

Have you ever tried visiting the Alamo? Was your visit more pleasant than mine? Leave a comment with your experience and your Alamo tips!

10 thoughts on “Worst Historic Attraction Ever? Why Visiting the Alamo Was a Mess”