Rhyolite is one of the best-preserved ghost towns in America. Situated in the mountains of western Nevada, just outside Death Valley National Park, the site provides a glimpse into a small mining community in the Nevada desert from a century ago.

About a dozen buildings or remnants are still standing, including a general store, bank, jail, and train station. Those interested in history, architecture or geography may find this Death Valley ghost town a fascinating place to visit. 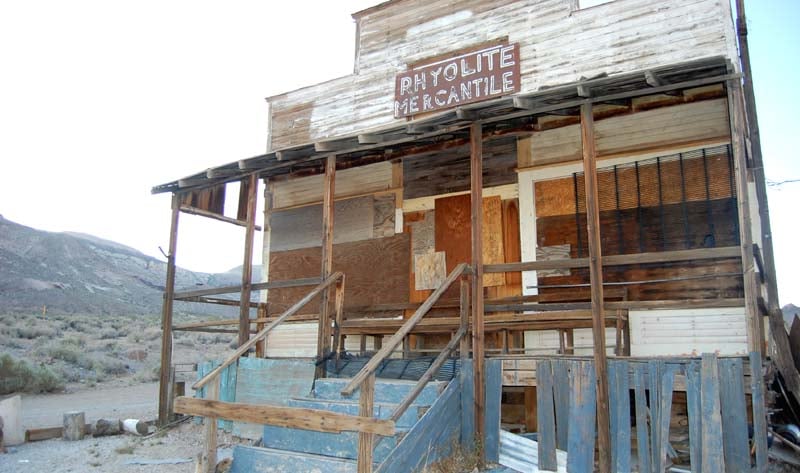 When I used to hear the term “ghost town,” I pictured the ones you see in Wild West movies, with rows of buildings along both sides of the street and tumbleweed rolling down a dirt road in the middle.

But to my disappointment, I discovered that most ghost towns in the U.S. consist of only one or two remaining buildings. Lame!

As I researched possible ghost towns to visit, one jumped out at me: Rhyolite, Nevada. It’s described as one of the best ghost towns in the country. That’s all the information I needed. In early June, it was off to Rhyolite! 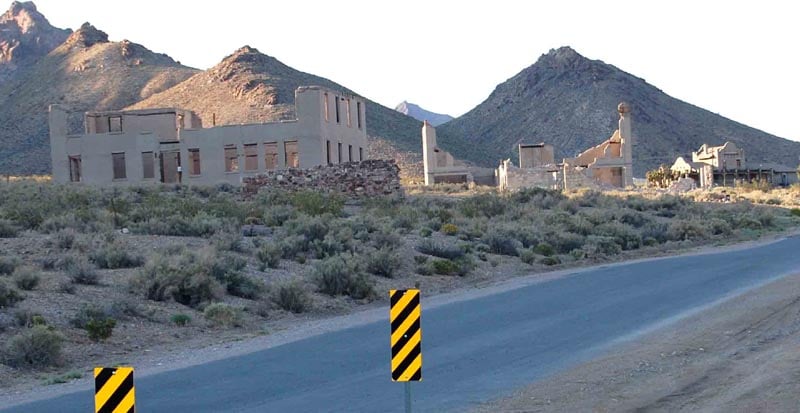 How to get to Rhyolite, the Death Valley ghost town

Rhyolite is tucked away in the mountains of the Nevada desert, just off Highway 374 and only a few miles east of Death Valley National Park. It was established in 1905 as a mining town, and by 1908 it was the third-largest city in Nevada. The mine closed just a couple years later, and by 1920 Rhyolite had been abandoned.

You’d never find this ghost town if you weren’t looking for it. No advertisements or billboards direct people here. In fact, the sign on the main road just says “Rhyolite –>” without even indicating that it’s a ghost town. Only those who are purposely seeking out this town actually find their way here. 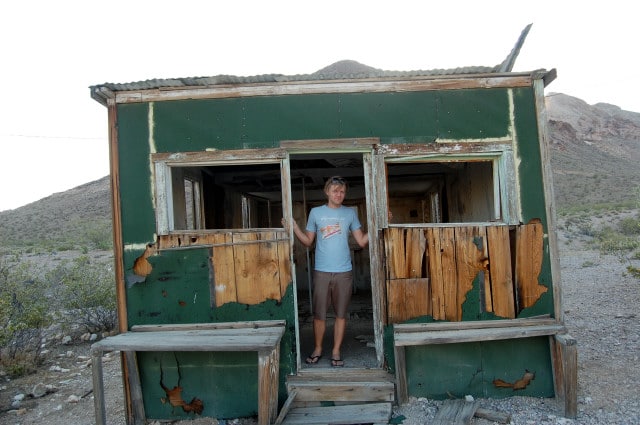 Rhyolite does not have a visitor center or any sort of on-duty personnel. It is truly a ghost town. That means you can put your wallet away – there’s no fee of any kind. Signs lead visitors to a small metal box containing a guest book and a map of the town. At that point, you’re on your own.

What remains of Rhyolite, Nevada

The first things you’ll notice as you approach Rhyolite are some gaudy sculptures. Someone created a multi-colored ceramic couch and a bicycle with large ghost figures standing next to it.

These sculptures are a bit off-putting, since you’re there to see a land that has remained untouched for decades, and instead you’re confronted with pieces of modern art. I didn’t like these sculptures and I wish someone would remove them.

However, once you continue up the road to the rest of the town and notice the ruins, everything begins to feel more like it did back in 1910. 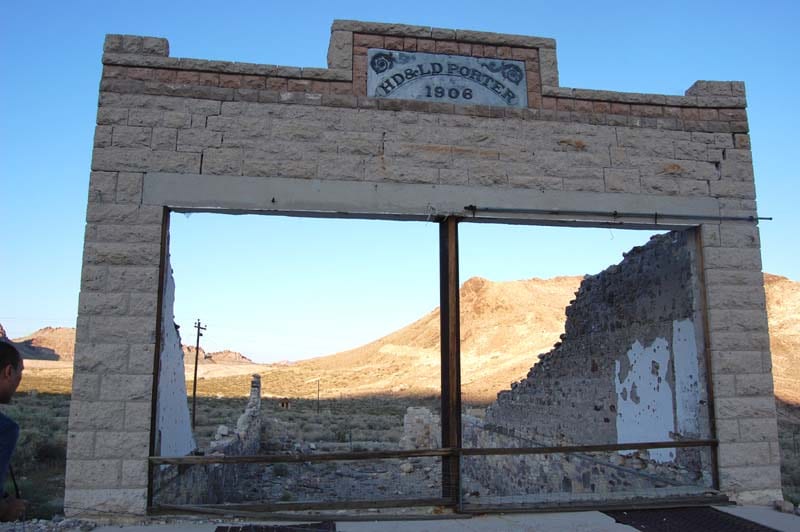 Rhyolite Mercantile is a general store that is one of the few remaining wood buildings in the town. The bank’s walls have started to crumble, but the thick-walled vault still stands tall inside the building. You can walk inside the vault if you like.

UPDATE 2023: Unfortunately, the Rhyolite Mercantile was struck by lightning a few years back and burned down, so it is no longer standing.

The jail is still in good condition. It’s possible to look in through the metal bars on one of the jail’s few windows to see just how awful it must have been to live there.

The train station is almost completely intact, but it’s fenced off. Perhaps the structure is too fragile to allow tourists inside. But visitors are able to snap photos of the station through the fence.

The schoolhouse is an impressive structure, though the roof is gone. This is the view looking out from inside the schoolhouse: 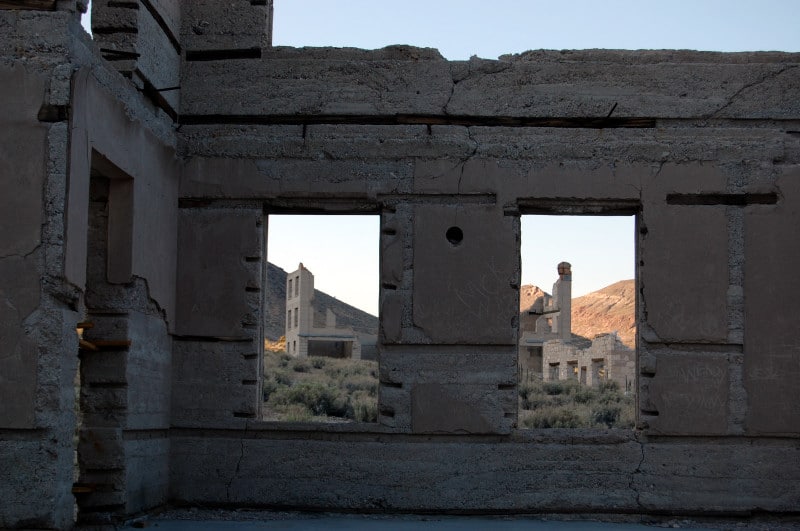 There’s also the Bottle House, a structure built from whiskey bottles in 1906 that is one of Rhyolite’s most popular buildings. It’s been restored several times, most recently in 2005. I wish people had left it alone; rebuilding it just robs it of its authenticity.

Many of the structures have historical markers with photographs showing the original design of the buildings. Here’s a sign showing the way the Overbury Building and Bishop Jewelry Store used to look. The remnants in the background are all that’s left of this particular structure. 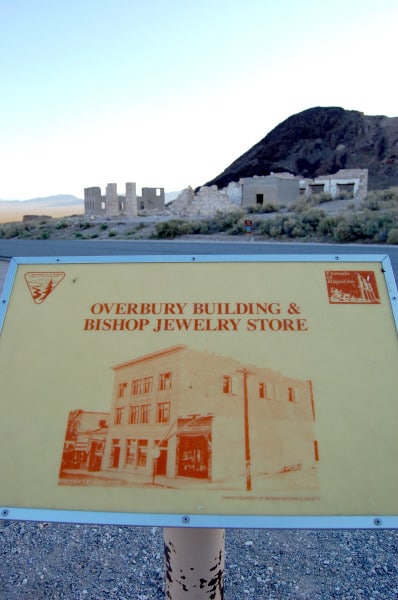 A peek to the east reveals a couple of old mine shafts clearly visible on the side of the hillside. It’s easy to look around and imagine what the bustling little town might have looked like.

Who comes to this town? Checking the visitor log

The guest book suggests that Rhyolite sees a decent number of visitors. But it’s definitely not overrun with tourists. During a sunny June afternoon, my friend and I were the only people here – unless you count the lizard on the ledge of this window. 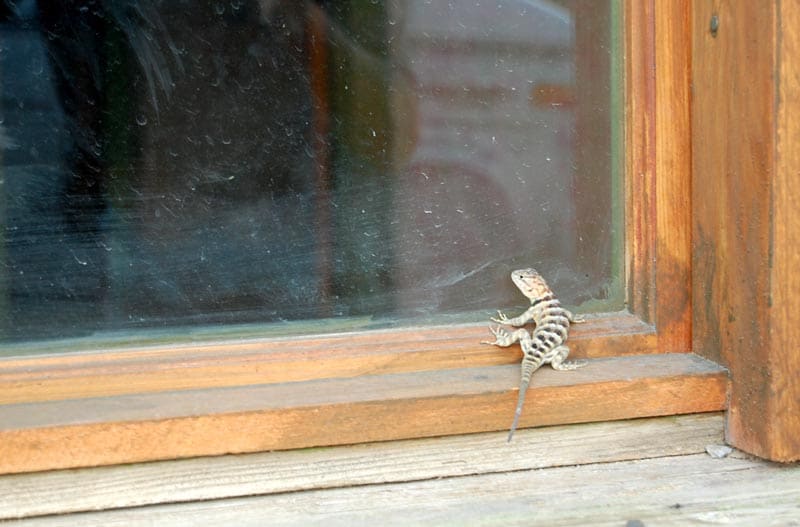 The town’s picturesque scenery makes it an ideal place to shoot movies. Rhyolite has hosted several film shoots, and that number has increased in recent years. Since 2005, four pictures have shot scenes in the town: The Island, Bone Dry, A Line in the Sand, and Twice as Dead.

A reader recently commented that Alanis Morissette’s iconic “You Oughta Know” music video was shot in Rhyolite. At first I thought this couldn’t be possible, because I’m a huge pop culture junkie, and I definitely would’ve remembered that.

And then I watched the video again and… holy cow! There are those instantly recognizable Rhyolite buildings!

Though I haven’t been able to find any articles online about the Morissette and Rhyolite connection, there’s absolutely no doubt these scenes were shot in Rhyolite.

You can see the crumbling concrete structures in the background. You can also see other scenes shot in Death Valley and other parts of the desert.

My visit would’ve been a lot cooler if I had known I was standing in the exact spot where Alanis shrieked about that Mr. Duplicity who left her a mess when he went away!

Rhyolite is only 35 miles from Death Valley‘s Furnace Creek Visitor Center, and it’s only 120 miles from Las Vegas, making it a great day trip from Vegas or road trip from anywhere in the Southwest.

So if you’re planning to travel through these cities, or the Beatty, Nevada area, you may want to consider stopping by. For more information, check out the official national park page for the Rhyolite ghost town.

And if you’re a ghost town fanatic, you’ll surely want to read about the creepy town of Picher, Oklahoma, which was a thriving community just a decade ago and is now abandoned due to toxic levels of lead.

Would you be interested in visiting the Death Valley ghost town of Rhyolite, Nevada?

15 thoughts on “The Death Valley Ghost Town: My Visit to Rhyolite, Nevada”