When I spent an evening in Providence, Rhode Island a few years back, I parked my van on a residential street overnight. I parked right next to a sign that said “No Parking 8am-10am,” so I knew that I’d have to get up early to move the van before 8. That was not a problem.

Imagine my surprise in the morning when I saw a $20 parking ticket on my windshield. This doesn’t make sense, I thought. It’s not 8 am yet! 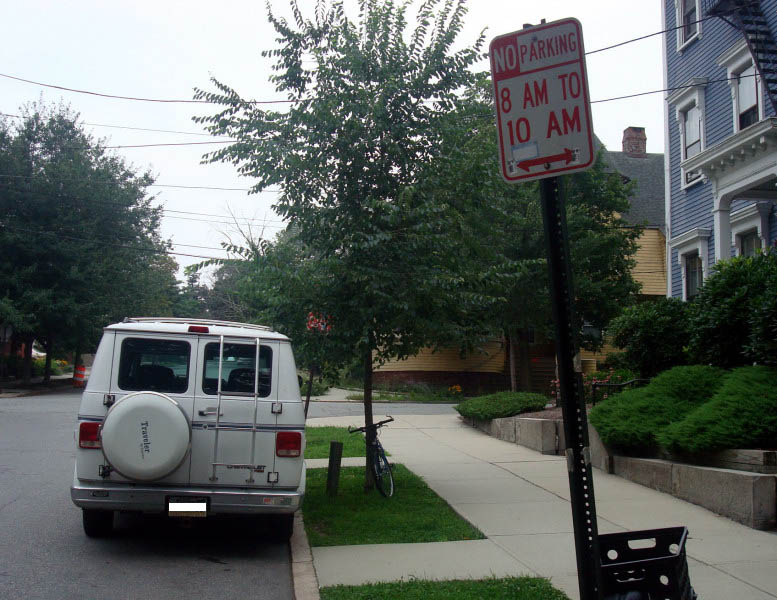 Dealing With a Providence Parking Ticket

The ticket was issued at 4:50 am and the alleged violation was ambiguous. I couldn’t figure out what I’d done wrong. I did some online research and discovered that overnight street parking is banned in the entire city of Providence.

My initial reaction was, Where were the signs? I’d passed through a few other cities that also ban overnight parking, like Beverly Hills, and a couple small Northeast towns, and all of those cities posted very obvious signs indicating that overnight parking was banned.

Providence had no signs. In fact, the sign I parked right next to said “No parking 8am-10am.” If parking was also banned overnight, why wouldn’t the sign say “No parking 12am-10am”?

She had no answer, except to inform me that I could challenge the citation by appearing in Providence court. I only had one day in my schedule for Rhode Island, so there was no way I was going to hang around for a few more days to go through the appeals process.

News of the city’s recent overnight parking changes is good to hear. But since this happened to me years ago, I was seemingly out of luck.

Since I couldn’t appeal the Providence parking ticket, I simply didn’t pay. My budget for this trip was very tight, and I couldn’t afford to throw away $20.

But more importantly, I refused to pay money for violating an ordinance that I couldn’t possibly have known existed. In fact, it’s my belief that Providence’s overnight parking ban exists merely as a way to extort money from unsuspecting out-of-towners.

I later received notices from a collection agency stating that I owed $60 due to interest and penalties. Fortunately, I knew about the Fair Debt Collection Practices Act, a law that enables consumers who are being hounded by collection agencies to send them a letter informing them that you dispute the debt and you have no intention of paying.

Once the agency receives this letter from you, they are legally required to stop contacting you. Their only recourse at that point, if they really want to force you to pay, is to file a lawsuit. Most agencies just don’t bother, especially if the amount in question is small.

I fired off my letter to the collection agency informing them that I won’t be paying this ticket. Legally, the city could now sue me if they want, but that would be silly and probably create more of a PR black eye for them.

The City of Providence will not see one penny from me, ever. Score one for the little guy!

UPDATE 2017: Since this post has been attracting an influx of new visitors, here’s an update. Every couple of years, I get a bill from a new collection agency that has acquired this “debt.” I send off the aforementioned letter informing them I don’t believe the debt is valid and have no plans to pay, and I never hear from them again. This “debt” has never appeared on any of my credit reports or done any damage to my credit in any way. So far, so good.

UPDATE 2020: I recently discovered this article which details the mess that was created when it was revealed that the mayor’s office had been on the receiving end of 119 unpaid parking tickets dating back to 2003. Even the mayor doesn’t seem to understand Providence’s parking regulations.

UPDATE 2022: I don’t want to spend the night in Providence again, out of protest. But I’m fine passing through Rhode Island on my way to somewhere else. Recently I visited several of the giant Mr. Potato Head statues scattered throughout the state.

Have you received a Providence parking ticket under similar circumstances? Check out the comments below for personal anecdotes from frustrated readers!