Whoa, I’m at the Georgia Aquarium – one of the world’s largest aquariums!

There are a few types of tourist attractions that I typically shy away from when I’m in a new city. Like zoos. And science museums. I enjoy those places, but they’re a dime a dozen. There’s not much variance from one to another. 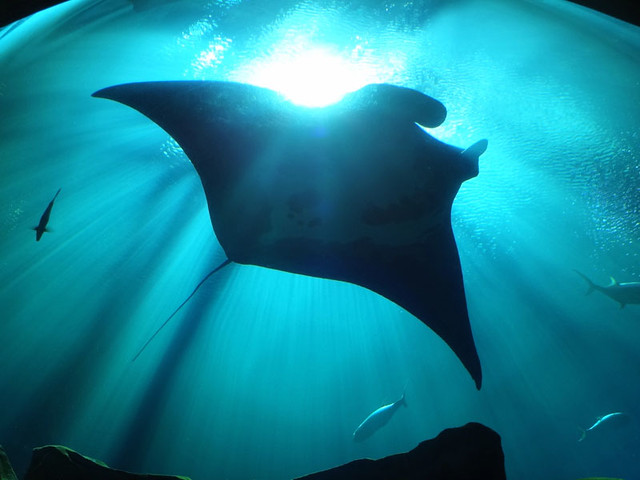 Aquariums tend to be the same way. But the Georgia Aquarium is different. For years, it was the largest aquarium on the planet, as verified by Guinness World Records, with more than ten million gallons of water. Stop and ponder that figure for a moment. Ten million gallons!

Though it has been passed in size by Chimelong Ocean Kingdom in China, the Georgia Aquarium is still one of the world’s biggest. The largest tank holds six million gallons of water and four whale sharks, the largest fish species in the world.

This is the only place in the world outside Asia that has whale sharks on display in a tank. That was all I needed to hear to purchase my ticket to the aquarium! Here’s a look at the 12 coolest things I saw inside.

Georgia Aquarium: My 12 Favorite Sights at the Famous Atlanta Aquarium 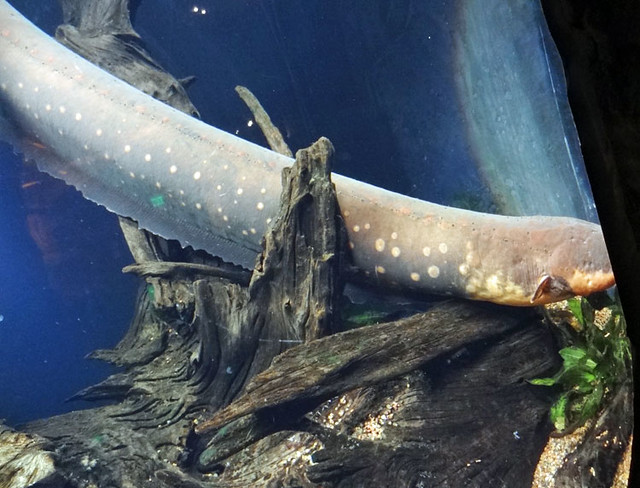 When I think of eels, I imagine some scientist somewhere trying to harness the power of the eel to allow us to recharge our portable devices. It sounds like something MacGyver would do in today’s world – find a live eel and connect his dead phone to recharge it and call for help. Anyway, that’s just a long-winded way of saying that I love these 500-volt beasts. 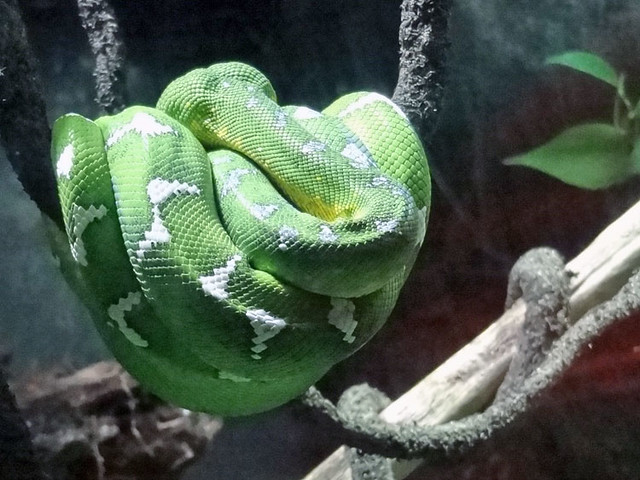 A lot of snakes are stuck with dreary brown exteriors, but these girls got lucky in the genetics department with their brilliant green skins. They are not venomous; they just wrap themselves around their victims and suffocate them. Fun! 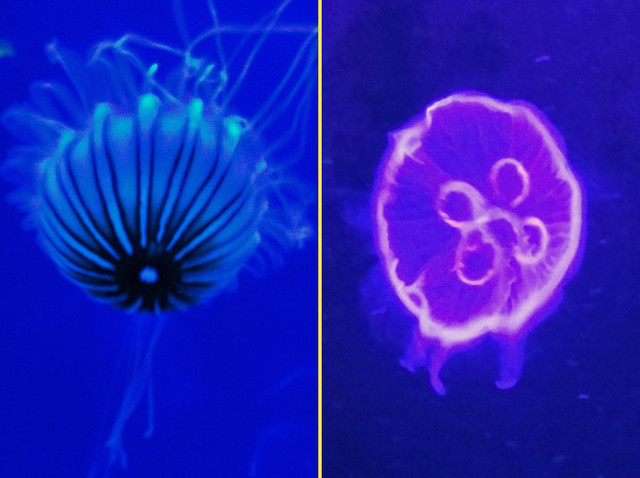 Nothing terrifies me more in the ocean than jellyfish. Sharks? No big deal. But these pesky, stinging blobs of goo can inflict real pain. Or so I hear. I’m not going anywhere near them if I can help it. These sea nettles (left) are painful to humans, but the moon jelly (right) is not. Another cool sight at this Atlanta aquarium! 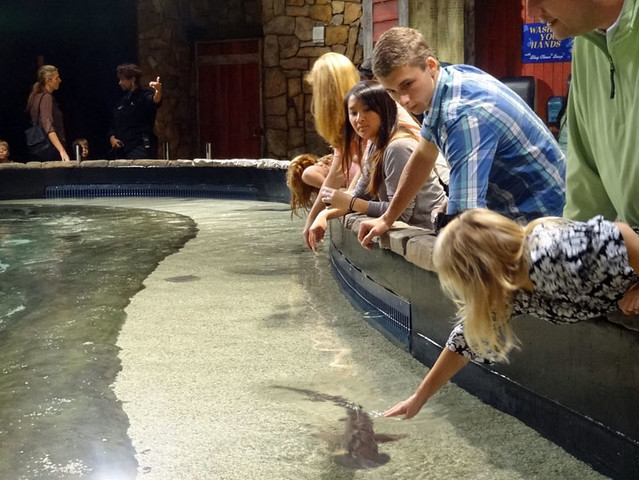 There are sharks in the petting zoo! It sounds like a horror film or bad SNL sketch, but this touch pool actually contains small sharks and rays that users can gently touch as they swim past. Spoiler: They’re soft and slimy. 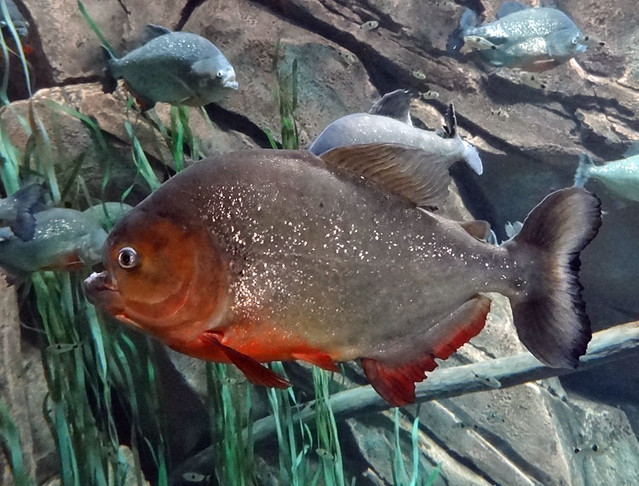 Quiet, violent and lethal. What’s not to love about piranhas? Assuming you’re not in the water near them, of course. 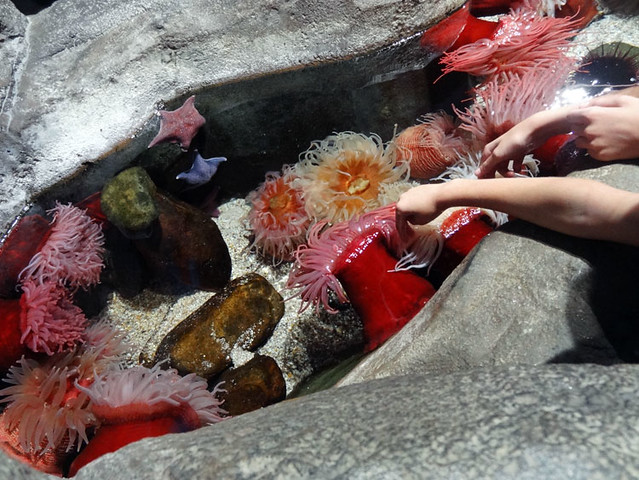 Here’s something that appeals to both kids and quirky travel guys. At the Georgia Aquarium anemone touch pool, you can feel up cold water anemones from the Pacific Ocean. These creatures actually eat small fish, so they can’t be kept in a tank with tiny fish, lest they start murdering the poor creatures. The anemones are kept in this pool with starfish. 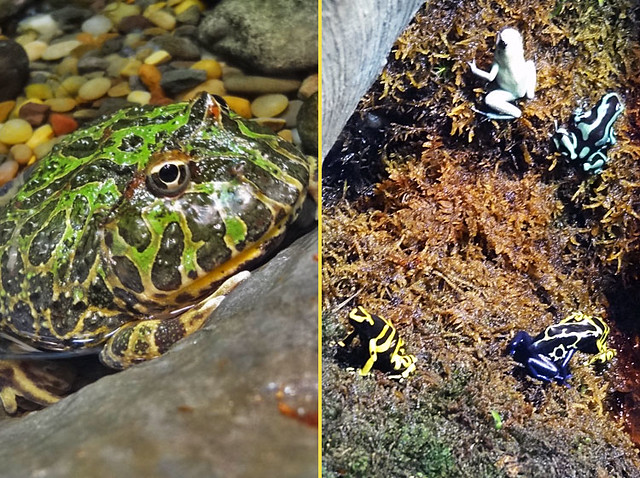 The current frog exhibit is full of frogs from around the world. Not just any frogs, but the really colorful ones. The exhibit is called “A Chorus of Colors,” after all. The stocky guy on the left is an ornate horned frog from South America. Their tadpoles eat so much that they often eat each other. On the right are some dart poison frogs, which are tiny and cool-looking but contain enough poison to kill 10 people. 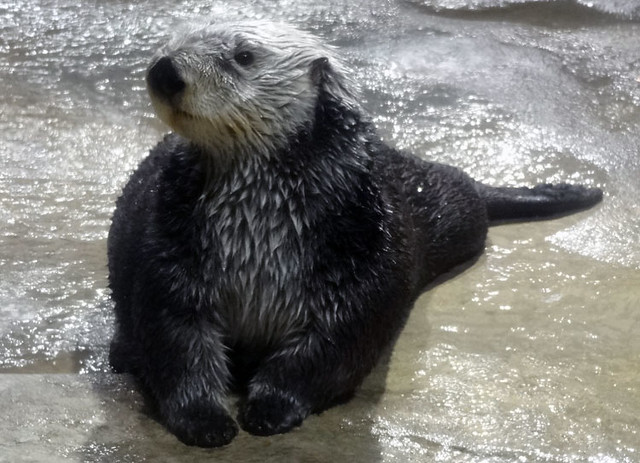 The otters like to swim around quickly in their tank, but if you’re patient, you may catch one hopping out of the water to take a breather. They get my vote for the cutest creatures in the place. 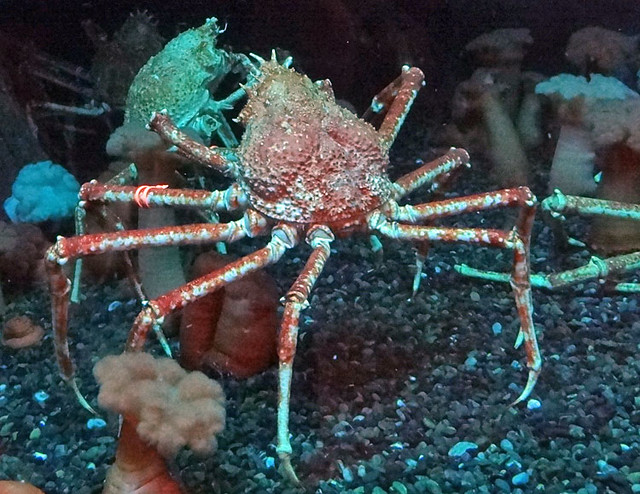 I don’t think these guys are huge tourist attractions, but to me they’re awesome. The legs of Japanese spider crabs can reach six feet long, and they’ve been known to live up to 100 years. That is just craziness. I wonder how they spend all that time. How dies a crab entertain itself for an entire century? Does it have a good memory? Can it remember what happened 80 years ago? Does it walk around telling the other crabs about how things were “back in my day”? So many unanswered questions.

Look at those great big googly eyes. The Georgia Aquarium has several species of rays, including two manta rays, making the facility one of four in the world to house mantas. I’m not sure which type of ray this is, but perhaps someone with a background in this area (calling marine biologist George Costanza!) can help identify it. 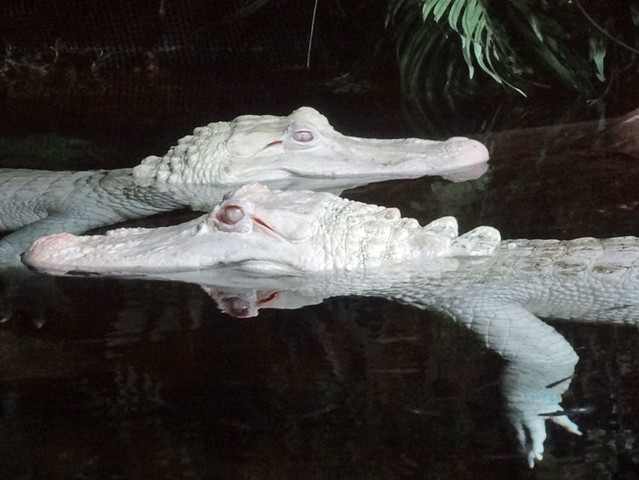 What is it about albino creatures that makes them so fascinating? The complete lack of color makes them kind of look like zombies. These two zombie gators, a male and female pair, are two of fewer than 50 albino alligators in the U.S. Look at those soul-less white eyes!

Note: Albino gators were absent from the aquarium for a few years, but they have now returned as part of the River Scout habitat.

Of course! The whale sharks are the big draw here. The Georgia Aquarium is the only place outside of Asia where you can see these beasts in a tank. I could sit and watch them swim by for hours. As noted earlier, whale sharks are neither whales nor sharks. They’re just supersized fish.

Despite their immense size, whale sharks eat only plankton, squid and tiny fish, so the thousands of other specimens in the tanks aren’t in danger.

The main viewing room is a great place to see the whale sharks swim, but the tank was also created with tunnels so guests can walk right underneath the animals and watch them swim by from a different vantage point. 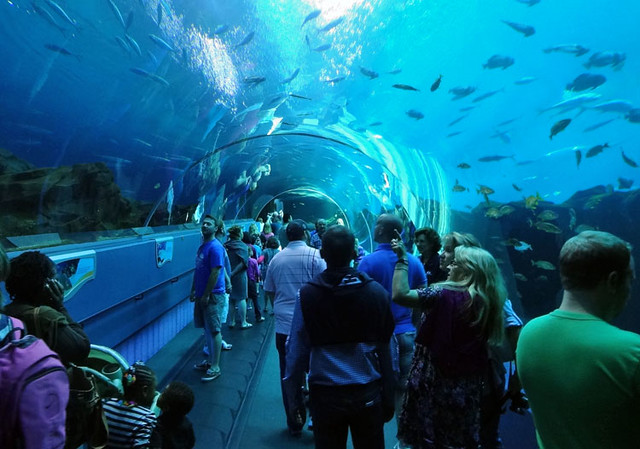 Through our partner GetYourGuide, you have two great ticket offers. One allows you to skip the line for regular admission.

If you’re seeking Georgia Aquarium coupons or discounts, check out the other offer. This one provides 30% discounted admission for guests who arrive after 4 pm. Evening visits can save you a bundle for those who are flexible!

Groupon also has aquarium deals periodically. If you buy tickets at the aquarium itself, adults will pay $32.95 as of 2019. Senior prices are $30.95, and kids $28.95. That’s quite expensive, which is why you’ll want to consider grabbing one of the cheaper evening tix. Every little bit of savings helps, especially since you’ll probably want to visit the World of Coca Cola while you’re in Atlanta as well.

Georgia Aquarium hours vary. It’s actually quite frustrating trying to figure out their hours, since they change several times a month with seemingly no rhyme or reason. Generally speaking, expect the aquarium to be open from 9 am to 9 pm.

However, some days they randomly open at 10 am or close at 5 pm. Once in a while, they open extra early, at 8 am. To find the aquarium hours for the day of your visit, check out their website and click on the calendar.

Parking at the Georgia Aquarium can be found in the attached garage, which has a whopping 1600 spaces. You’ll pay for it, though. Parking costs $10 as of 2020.

Many folks consider this Atlanta aquarium to be the best aquarium in the world. If you’ve been there, would you agree?

9 thoughts on “Georgia Aquarium: My 12 Favorite Sights From One of the World’s Largest Aquariums”