Woohoo, it’s an Andrew WK concert! As a huge music fan and budget traveler, one of my favorite things to do in big cities is look for in-store performances, where bands play free shows in local record stores to promote their music. I’ve seen Iron & Wine at Amoeba Records in L.A., the Duchess & the Duke at Reckless in Chicago, and Carbon Leaf at Easy Street in Seattle.

A couple years ago, I found myself with time to kill in Vancouver and checked the local weekly to see if anything was going on. Amazingly, there was a late-afternoon free concert at Neptoon Records by Andrew W.K., who was the original party rocker long before LMFAO came around. Joining Andrew were the Evaporators, a punk band led by the endearing weirdo known as Nardwuar.

Neptoon is Vancouver’s oldest independent record store. I was excited to check out this gig!

I got there early, which proved to be a smart move, as the place filled up beyond capacity, which was only 150 people at most. A large group of people got stuck outside.

Once the show began, Nardwuar and Andrew WK delivered an awesome collection of rabid two-minute songs. Nardwuar decided to crowd surf, which in the small store put him perilously close to the ceiling. Gotta love those punk rockers, living on the edge!

Andrew WK is the genius behind hits like “I Love NYC” and “Party Hard.” He had everyone in the crowd pumping their fists and shouting along. 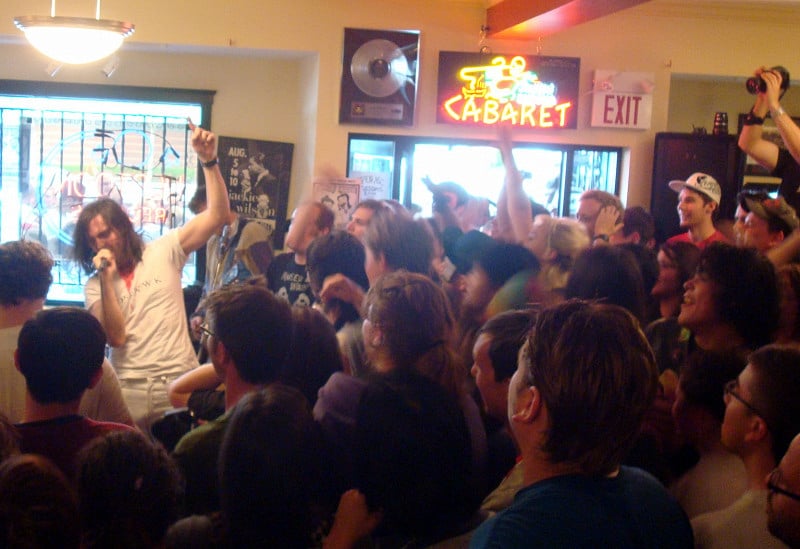 What can you do at 4 pm on a Tuesday that would be more fun than this? The Andrew WK concert is the enduring memory of my first trip to Vancouver. Since then, I’ve gone back to check out places like the totem poles at Stanley Park.

Funnily enough, several years after this, when I was a music journalist, I attended Riot Fest in Chicago and got to meet Andrew WK in the media tent. It was cool to see how things came full circle from initially seeing him in such a tiny record store. His performance there was just as manic, even though it was on a much bigger stage.

10 thoughts on “That Time I Saw an Andrew W.K. Concert Inside a Tiny Record Store in Vancouver”