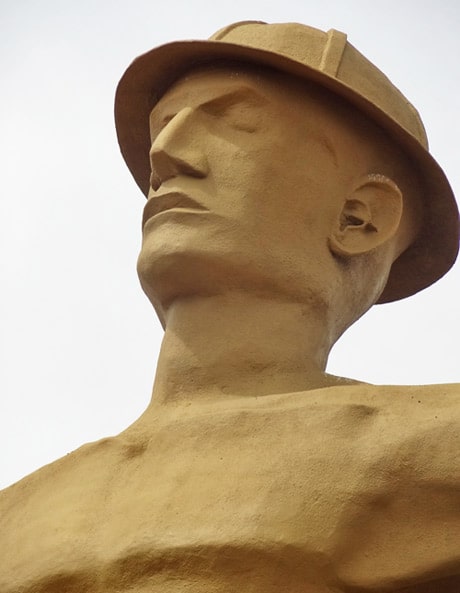 The tallest statue in the United States is the Statue of Liberty. Which seems appropriate and sensible. But when you start looking at the rest of the Top 10 tallest statues, you find some very quirky and unusual structures on the list.

Coming in at number five is the “Golden Driller,” a 75-foot-tall landmark in Tulsa, Oklahoma that weighs more than 43,000 pounds. This thing is taller than an oil rig, as you can see by the derrick that looks so tiny next to the statue. It was reportedly built sturdy so that it could withstand the state’s common tornadoes.

The Golden Driller has quite a history. There have been three different drillers over the years, starting with a papier mache version that obviously wasn’t going to last long. The current statue was erected in 1966 and was given significant repairs in 1979 before it would have needed to be bulldozed.

Eventually, it found its way to the Tulsa Expo Center. You can see from the photo that it towers over the surrounding building. The Driller is resting his right arm atop an actual oil derrick which was brought in from Seminole, Oklahoma.

The statue has an inscription which reads in part, “Dedicated to the men of the petroleum industry who by their vision and daring have created from God’s abundance a better life for mankind.”

There is a a parking/driving area just in front of the Driller that will allow you to pull in and get some selfies or wide angle photos.

In case you’re curious about the real size of this thing, it is said to have belt that is 48 feet in circumference, and he wears a size 112 hard hat. Good luck finding another hat from your local store that will fit this guy!

Some folks, including a one-time county commissioner, hate the Golden Driller statue and consider it an eyesore. But at this point it has become a symbol of Tulsa and it gives people a reason to talk about (and blog about) the city.

Update 2021: Last year, the driller was repainted to look like Elon Musk, and TULSA on his belt was repainted as TESLA. This was done as part of an attempt to woo Tesla’s business to the city.

Thankfully, the Driller has now been restored to look like its original self. The other noticeable change is that there is now advertising banner inside the oil derrick. One recent banner was an ad for Pepsi.

Other Things To Do in Oklahoma Near Route 66

Thinking of visiting Oklahoma? Head over to Oklahoma City, only about 90 minutes from Tulsa, to check out unique Oklahoma City attractions like the Animal Skeleton Museum, the National Cowboy & Western Heritage Museum, and the American Banjo Museum.

Historic Route 66 is one of the classic American road trips and it passes through both Tulsa and Oklahoma City. Here’s a journal of my day on Route 66 in Oklahoma. Don’t miss Pops Soda Ranch when you’re on Route 66!

Would you visit the Golden Driller statue in Tulsa?