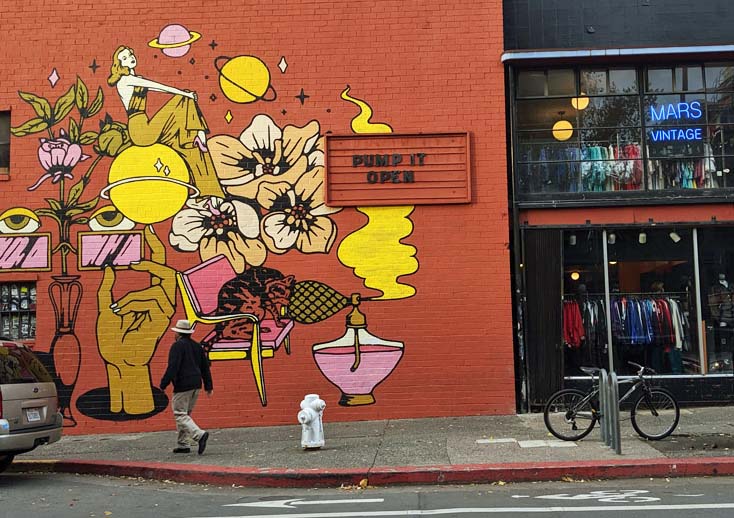 If the only thing you know about Berkeley, California is its history as the center of the protest movement in the 1960s, then you definitely haven’t visited recently! In the decades since then, Berkeley has grown into a lively city full of culture and an underrated destination in the Bay Area. 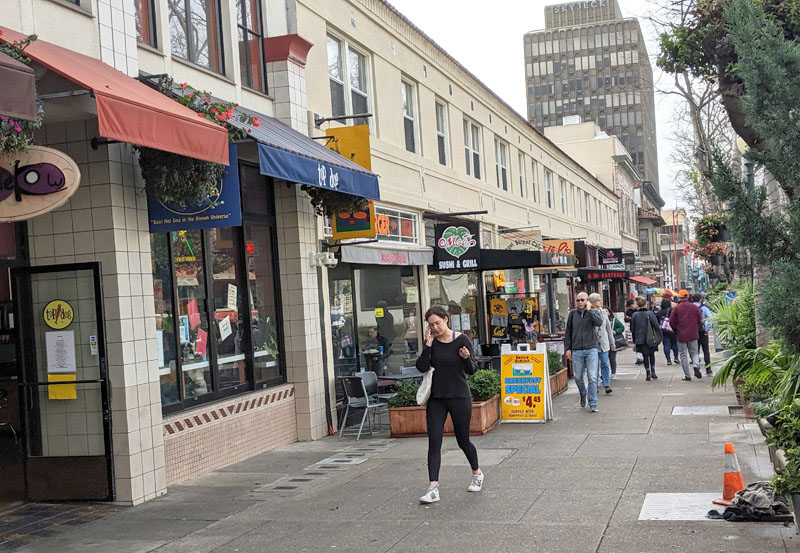 How easy is it to get to Berkeley from San Francisco? What is Telegraph Avenue like these days? Where’s the best place to eat or catch a show in Berkeley? What are the coolest Berkeley neighborhoods to visit? Read on for answers to all your questions about Berkeley sightseeing, shopping, dining, recreation, and more.

RELATED READING: 24 Quirky & Fun Things To Do in Berkeley! 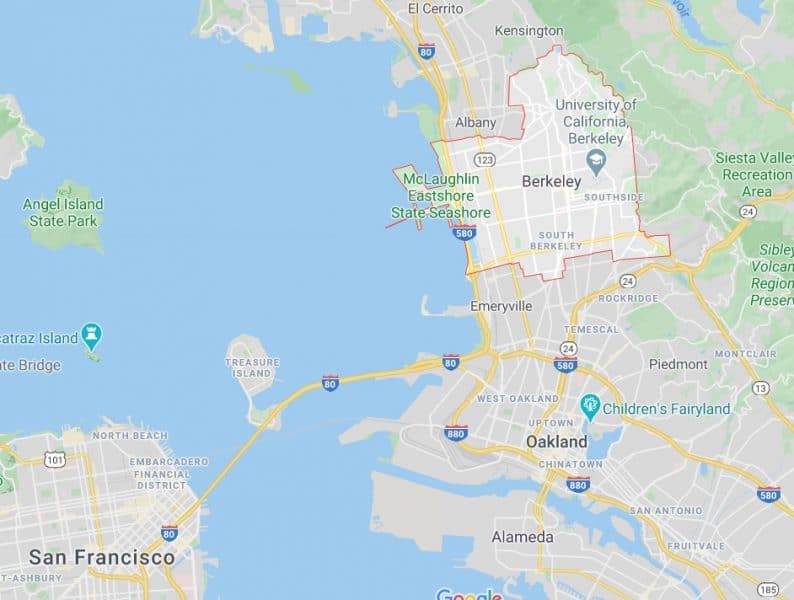 You can see Berkeley’s proximity to Oakland and San Francisco in this map. The Marina is on the western end of Berkeley, while the hills of Tilden Regional Park serve as the eastern border.

Exploring the city is pretty easy. The heart of Berkeley is relatively flat, so it’s easy to get around by walking or biking. Local buses and rideshare services are also readily available.

Getting Here: How Far is Berkeley From Oakland And San Francisco? 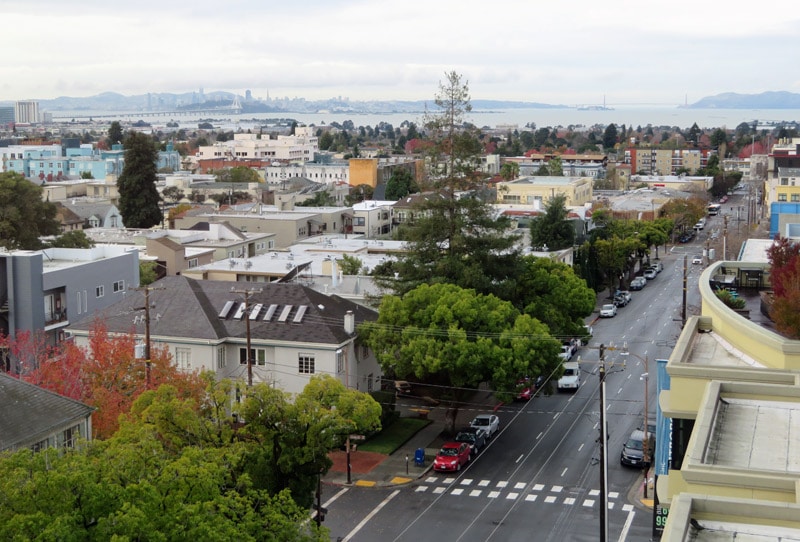 Getting to Berkeley is easy due to the Bay Area’s extensive public transit system. Of course, you can take Uber and Lyft, but it’s just as efficient to take the BART subway train to the Downtown Berkeley stop on the Orange or Red line trains. 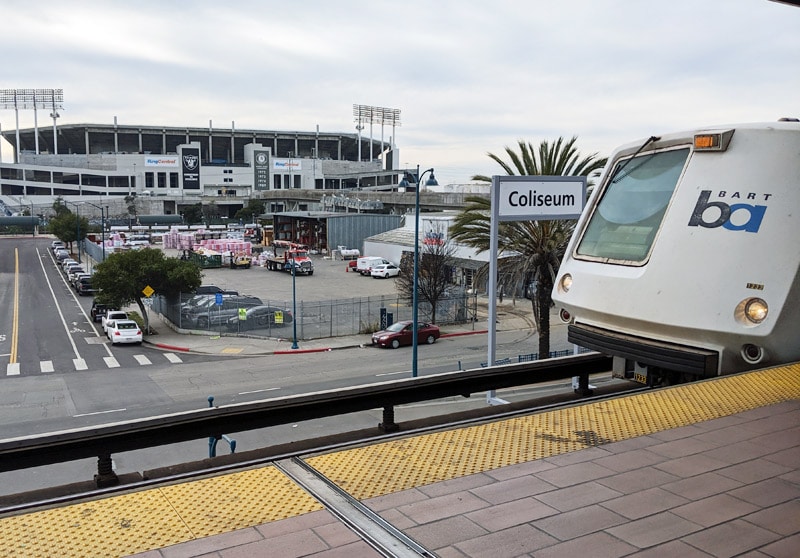 Either way, it’s pretty simple. And it’ll only cost around $10 from SFO and $9 from Oakland. BART trains run roughly 20 hours a day, so they’re convenient unless you’re traveling between 1 and 5 am. See BART’s fare calculator for exact costs and schedules.

Where to Stay in Berkeley: Recommended Berkeley Hotels

DoubleTree by Hilton Berkeley Marina: The only hotel in the Marina, the DoubleTree gives you easy access to the nearby parks, and nice views of the San Francisco Bay. Check availability here

Graduate Berkeley: Another hotel near UC Berkeley, the Graduate has an ideal location, just one block from campus and one block from Telegraph Avenue. The hotel manages to deftly blend vintage and modern design styles. Check availability here

Nash Hotel: This one is a more affordable option if you’re trying to stay in Berkeley on a budget. It’s very close to the BART subway station and offers free wifi. Check availability here

Browse booking.com to see all the hotels and properties in Berkeley.

Some of the Berkeley neighborhoods worth checking out include:

Downtown: If you’re taking the BART subway train, Downtown is likely where you’ll be emerging at street level to get your first glimpse of the city. Unlike many other downtowns, Downtown Berkeley isn’t overrun with skyscrapers and corporate offices. It’s actually a fun area home to arts and music venues, restaurants, and hotels, as well as the Visitor Information Center.

Gilman District: Once a largely industrial area, the Gilman District has become a cool neighborhood with everything from major shopping retailers like Whole Foods and REI to artist studios and galleries. 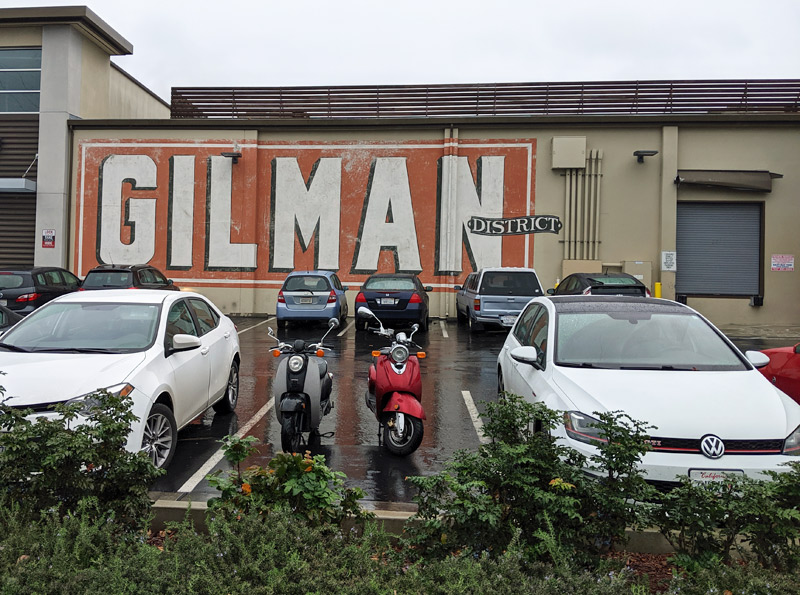 Telegraph Ave. District: Telegraph Avenue was the epicenter of the protest movement decades ago. Located next to the university, it’s still one of the most vibrant areas of the city.

North Shattuck: The northern part of Berkeley contains some of the Bay Area’s top restaurants in what has been informally known as the Gourmet Ghetto (though there’s some controversy over that moniker and its usage seems to be waning.) Make a reservation and check out the famed Chez Panisse restaurant!

UC Berkeley: Things To See On the University Campus

The University of California, Berkeley has a campus that covers more than 1200 acres. It’s not a bad place to begin your Berkeley visit. 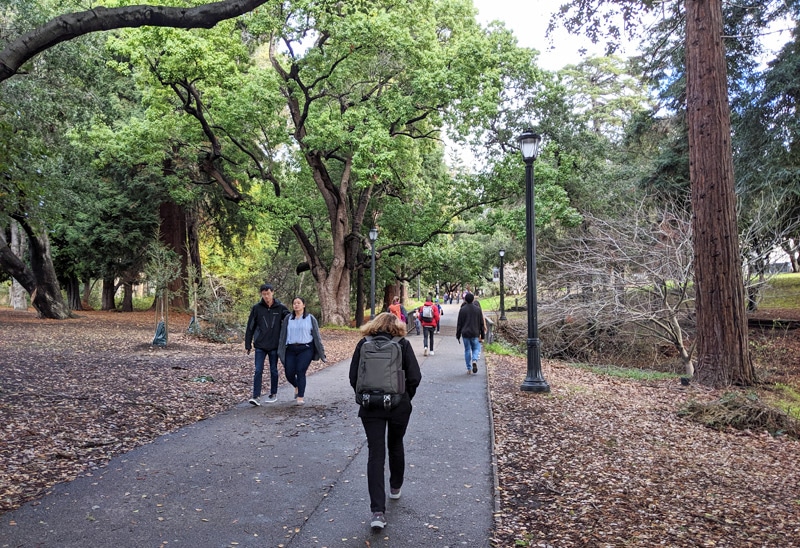 On your way through campus, take the elevator to the observation deck of Sather Tower, the 307-foot tower also known as the Campanile, which offers distant views of Alcatraz and the Golden Gate Bridge. Follow Strawberry Creek, which flows through much of campus.

As you’d expect from any major university, UC Berkeley also has plenty of performances, theater events, guest lectures, and film exhibitions open to the public. Check out their schedule of upcoming events – maybe there’s something cool going on while you’re in town!

Though Telegraph Avenue has gentrified a bit, it retains some of the counterculture charm from the old days. You’ll still see the occasional skateboarder or hippie with a guitar walking around. Street vendors line the sidewalks, especially on weekends. 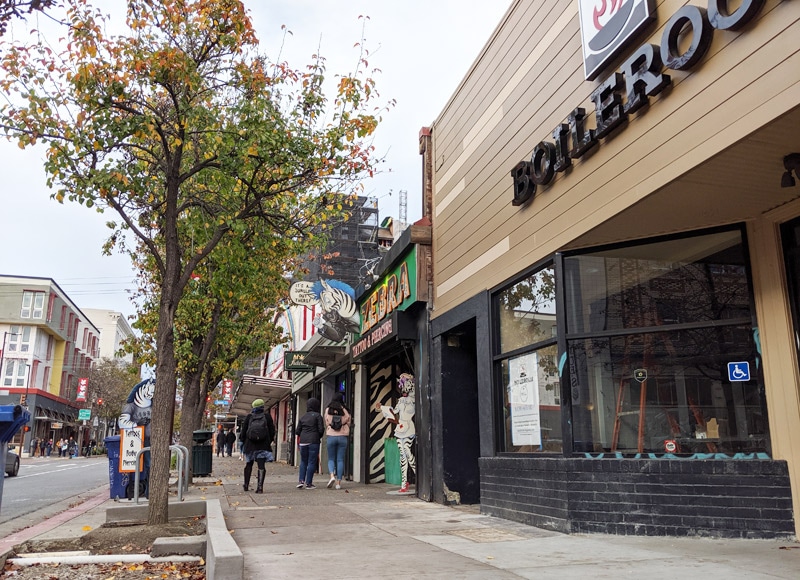 In between fancy ice cream and poke eateries and new apartments going up, some of the old businesses have endured, like Moe’s Books, a staple of the community since 1959.

Vinyl record shops Amoeba Music and Rasputin and the smoking and gift shop Annapurna will make you feel like you’ve temporarily gone back in time.

I also highly recommend Mars Vintage Clothing thrift store, which isn’t as old as some of the other shops but still feels like a time warp with its selection of new and used hipster clothes from the past several decades.

Berkeley Restaurants to Check Out

Berkeley has become well-known as a culinary destination. Chez Panisse started the trend of building entire menus from local, organic ingredients. Other noteworthy spots nearby include Gregoire, the Cheese Board Collective, and the Epicurious Garden food hall.

While the North Shattuck neighborhood is Berkeley’s renowned dining destination, good restaurants are found throughout the city, including the university area, which has options ranging from upscale ethnic cuisine to fast casual tacos to cheap comfort food at Top Dog.

The top Berkeley restaurants I dined at during my visit included Cornerstone, a comfort food restaurant and brewery that doubles as a music venue; Julia’s, an upscale dining room inside the Berkeley City Club hotel; and Jupiter, which serves up pizza and beer all day, from lunch through late-night.

The city has lots of vegetarian options too, like the Butcher’s Son, which creates fully vegan versions of familiar sandwiches and bakery items. I can’t claim to have expert knowledge of the entire Berkeley culinary scene – for more informed opinions on where to eat in Berkeley, check out SF Gate’s recommendations.

Live music in Berkeley spans everything from quiet folk music at the cozy Back Room to the DIY punk shows at the famed venue 924 Gilman. Cornerstone hosts mid-level national acts in its concert room – recent shows there have included Wyclef Jean, Eve 6, and George Clinton & Parliament Funkadelic.

For art, a good place to start is BAMPFA, the spacious art and film museum affiliated with UC Berkeley. From there, try galleries like 4th Street Fine Art, ACCI Gallery, and SHOH Gallery. Or visit some of the independent artists working at collectives like the Berkeley Artisans in the Sawtooth Building.

For a non-touristy experience, the Art House Gallery and Cultural Center in South Berkeley is an interesting space with art and records on the walls. The center hosts spoken word and acoustic performances, mostly on weekends.

Berkeley has a handful of unique museums. The Takara Sake Museum describes how sake is produced; the Aftel Archive of Curious Scents is a museum dedicated to pleasant odors; and the Lawrence Hall of Science features a planetarium and exhibits about animals, DNA, and the universe.

Click for an entire article on fun and quirky things to do in Berkeley!

What’s the best time of year to visit Berkeley?

Bay Area weather doesn’t vary nearly as much as weather in many other parts of the U.S., so you can comfortably visit Berkeley any time of year. The warmest months are August through October, with average high temperatures at a modest 70 F (21 C.) The coolest months are December and January, when highs still average 57 F (14 C.) 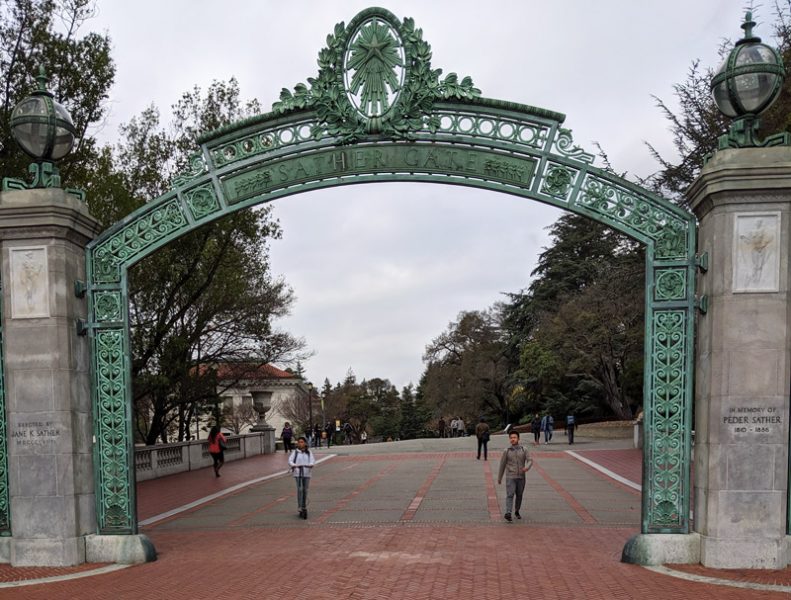 What can I do at the Berkeley Marina?

The Marina area is another great place to add to your list of Berkeley sightseeing spots. The main highlight is 90-acre Cesar Chavez Park, which has walking trails and small hills that provide great views of the Golden Gate Bridge on clear days.

Restaurants like Skates on the Bay and Hana Japan serve up seafood with a view. The DoubleTree also has a restaurant and a coffee shop. Organizations like Cal Adventures offer occasional windsurfing and standup paddleboarding classes. There’s an Adventure Playground where kids can zipline or build forts.

Where is the best shopping in Berkeley?

Shopping in Berkeley totally depends what you’re looking for. As noted, Telegraph Avenue should be your destination if you want thrift stores and local book and record shops.

Larger chains like Target, Whole Foods, REI, and Trader Joe’s can be found in the Gilman District and on University Avenue. The busy Fourth Street shopping area contains well-known retailers like Anthropologie and Sephora, plus plenty of boutique shops that offer a more local shopping experience.

Does Berkeley have any hiking or parks?

To get your fill of the outdoors in Berkeley, head up into the hills. Technically a part of the UC Berkeley campus, the Botanical Garden has an extensive collection of wild-collected plants from around the world, including a towering sequoia (redwood) grove planted in 1930. 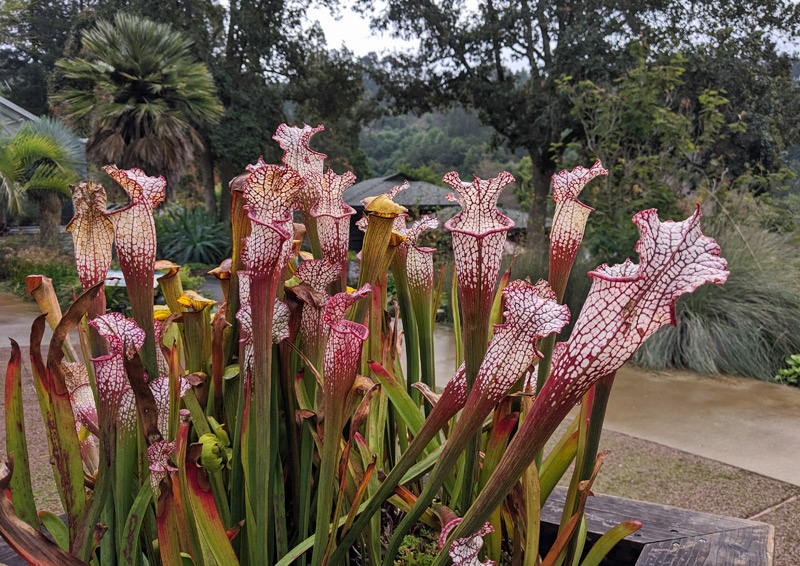 Tilden Park might be one of the more underappreciated recreation areas in the Bay. The 2079-acre park is home to an 18-hole golf course, a century-old merry-go-round, and a 10-acre lake that attracts swimmers in the summer.

Hikers can choose from a few dozen miles of trails, many of which run through the Tilden Nature Area preserve and contain around 500 feet of elevation gain.

For joggers and bikers, a portion of the epic, 500-mile San Francisco Bay Trail goes through the western side of Berkeley near the Marina, passing by wetlands and a bird preserve in McLaughlin Eastlands State Park.

What are your best Berkeley sightseeing suggestions? 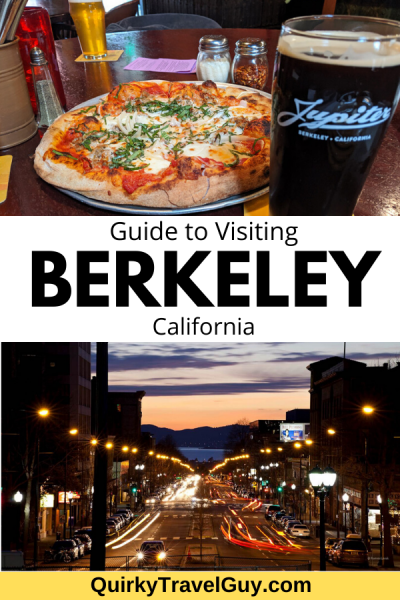 Note: My trip was made possible by Visit Berkeley. For more information on Berkeley, CA, visit www.visitberkeley.com.