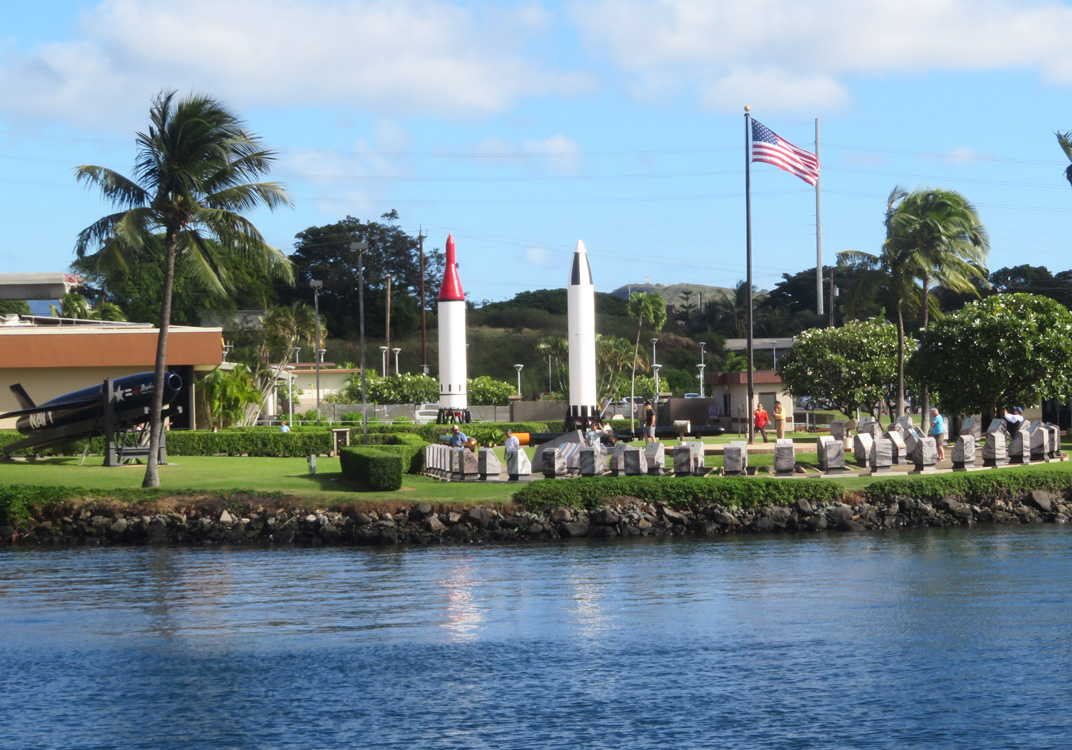 Visiting Pearl Harbor was the most powerful experience of my trip to the island of Oahu in Hawaii. A visit to a serious site like Pearl Harbor isn’t funny and quirky — it’s educational, sobering, and moving. You’ll learn about the war strategy, see the USS Bowfin, and come away with a greater understanding of American history.

If you budget some time during your Hawaii vacation to check out this must-see monument (and you definitely should!), here’s what you’ll see.

Learning About the Pearl Harbor Attack

Pearl Harbor, of course, was struck by a surprise attack by the Japanese on December 7, 1941, which prompted the U.S. to enter World War II. While I knew the major details about Pearl Harbor before visiting the site, I had no sense of the massive scope of the bombing. The biggest surprise was hearing that the initial wave of bombers and torpedo planes totaled a whopping 183 aircraft. The second wave was an additional 171 planes.

Imagine living on Oahu at that time and having to endure a nightmarish 90 minutes while 300 planes bombed the military base. More than 2400 Americans died and another 1100 were injured. It was the deadliest attack in the U.S. until 9/11.

Although the national monument is somber, the Pearl Harbor grounds aren’t sad and depressing. There’s a good amount of positivity and love in the various displays. You see that in the wreaths dedicated to each branch of the armed services. And in the flowers and personal remembrances that visitors bring. 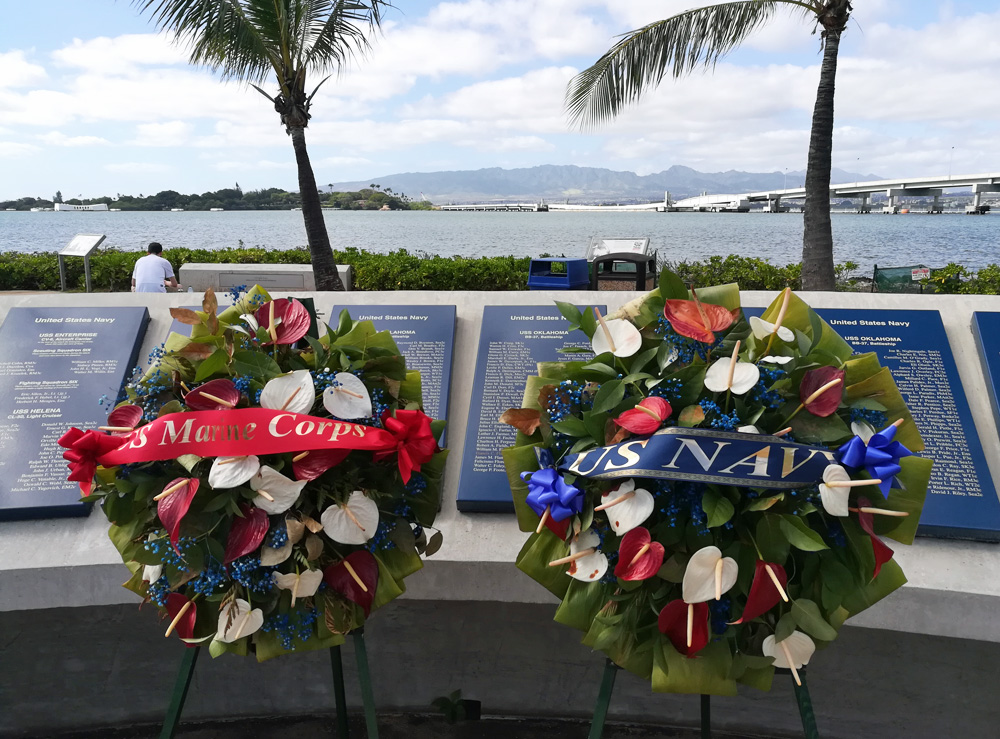 I thought this was interesting: Some of the service members who survived the attack on the USS Arizona choose to have their remains interred at the monument. Many service members and their families visit the site every year, either on their own or as part of formal ceremonies. 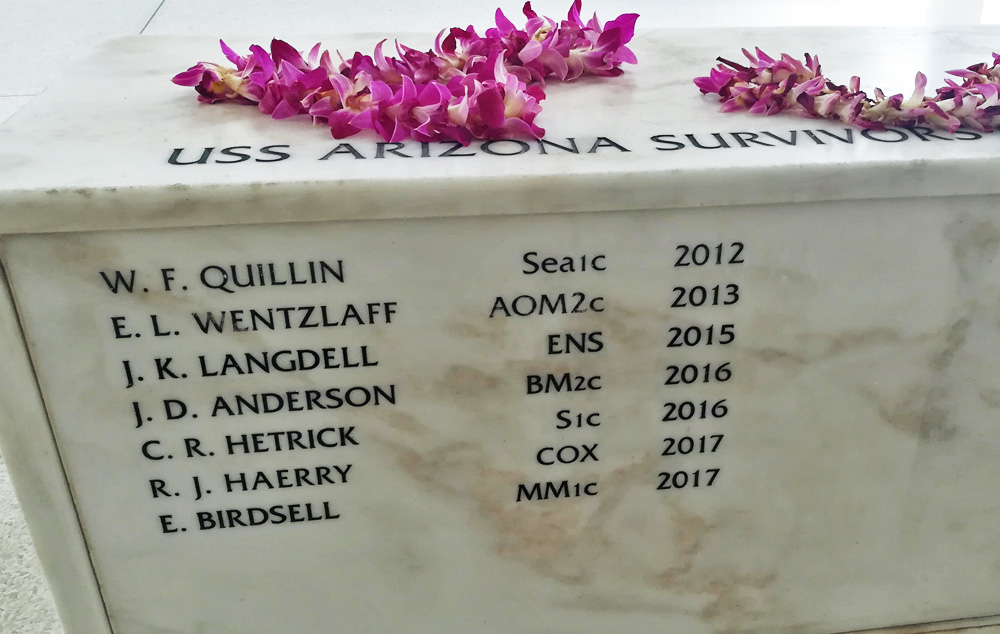 What’s the best way to visit Pearl Harbor? Well, the easiest is to book a group tour likes the ones below from GetYourGuide. If you want to try to nab tickets on your own, scroll down to see how I did it.

The heart of the monument is the USS Arizona Memorial. The Arizona was one of the biggest casualties of the attack. It exploded and sank, killing more than 1000 officers. 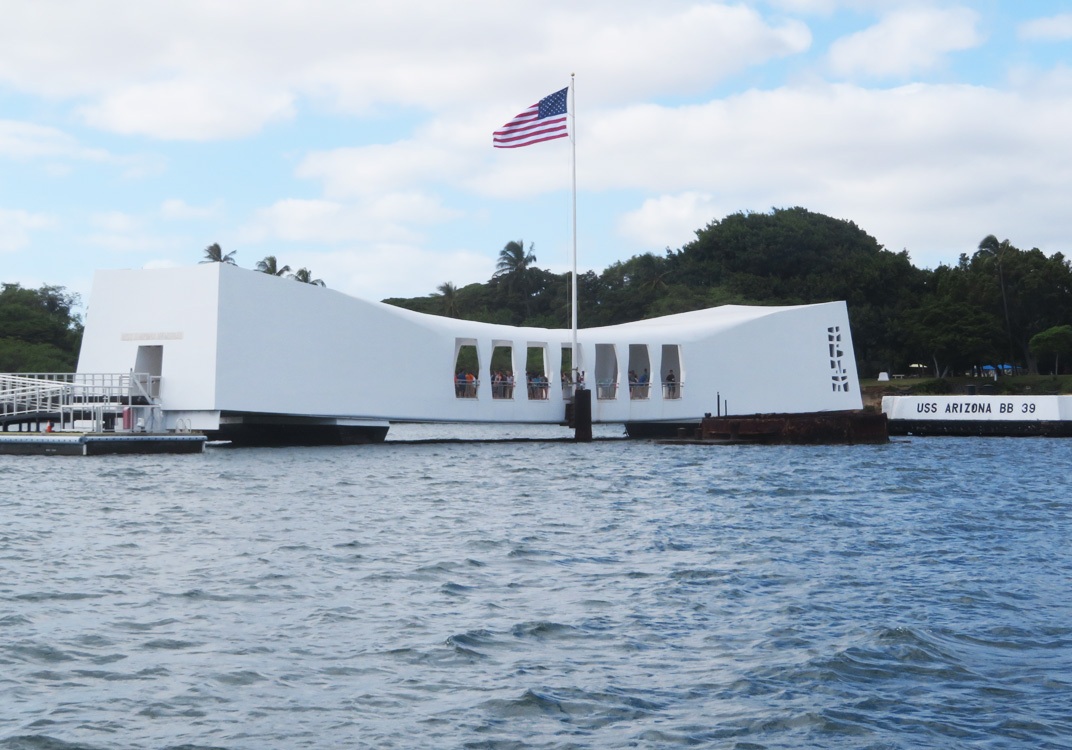 Today, the ship remains right where it sank. In a creative display of ingenuity, a beautiful white memorial was built above the ship. To reach the memorial, visitors must take a free ferry (they run every 15 minutes) from the main visitor center. Guests enter the memorial, where they can look down to see the remains of the ship. 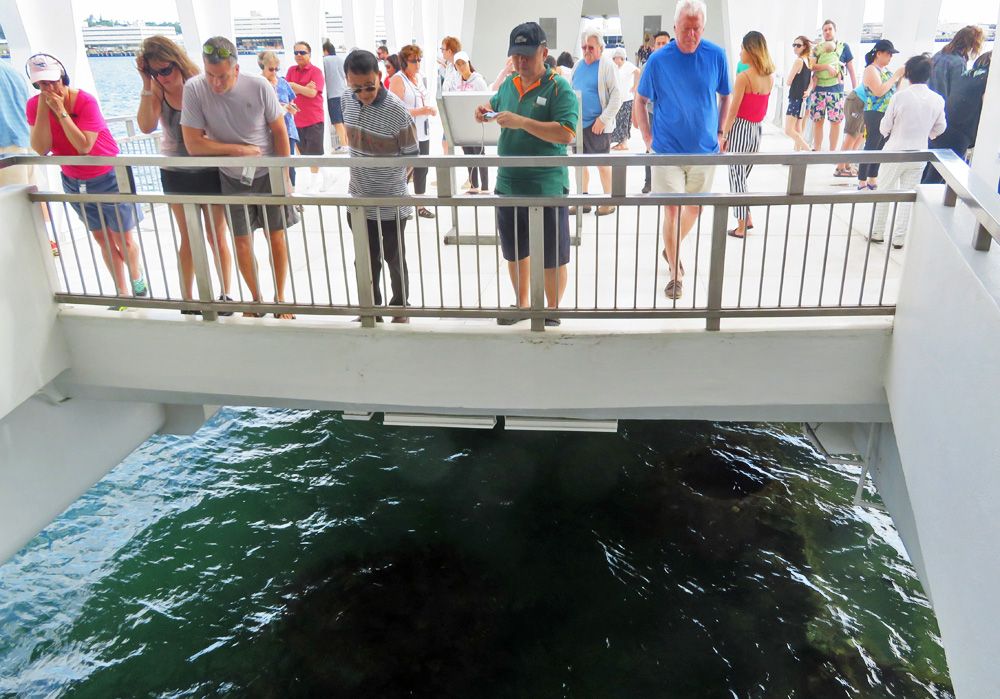 The memorial is tasteful and visually stunning, with tons of natural light coming in the open spaces. The names of the victims are inscribed on a marble wall in the back room of the memorial. 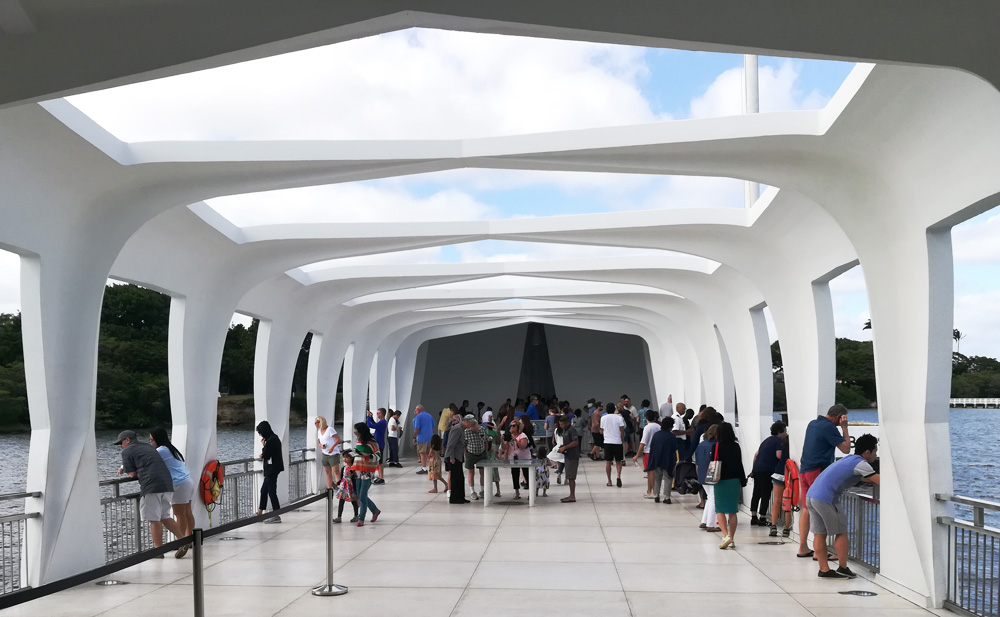 A couple parts of the ship remain above water. This is the base of gun turret #3. 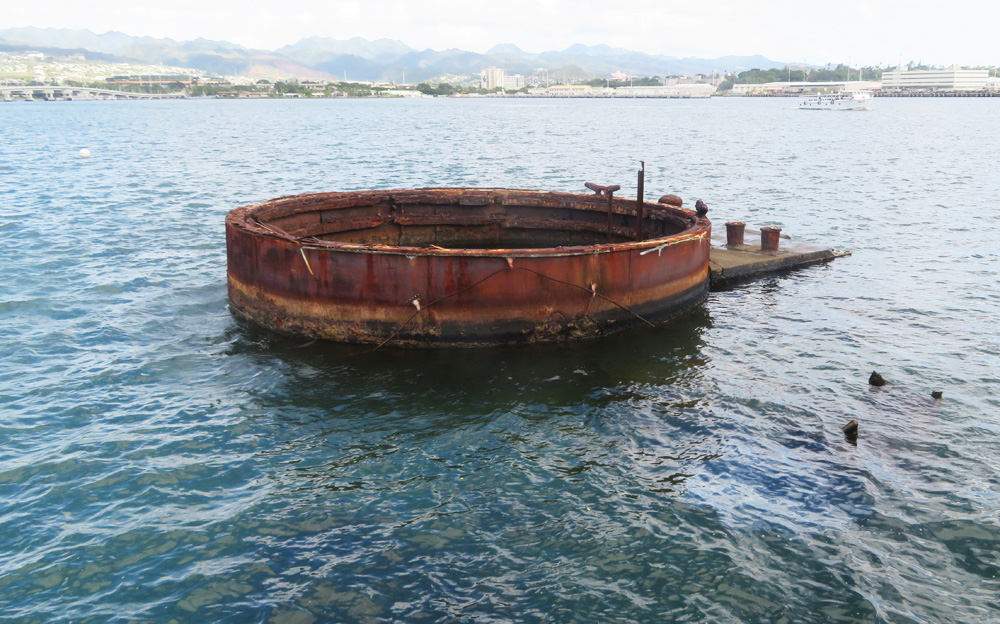 Over at the USS Bowfin, guests can walk through a World War II submarine that was put into service in 1942. Just about every room of the submarine is open. Visitors can see the dorms, kitchen, and control rooms with their antiquated machinery. 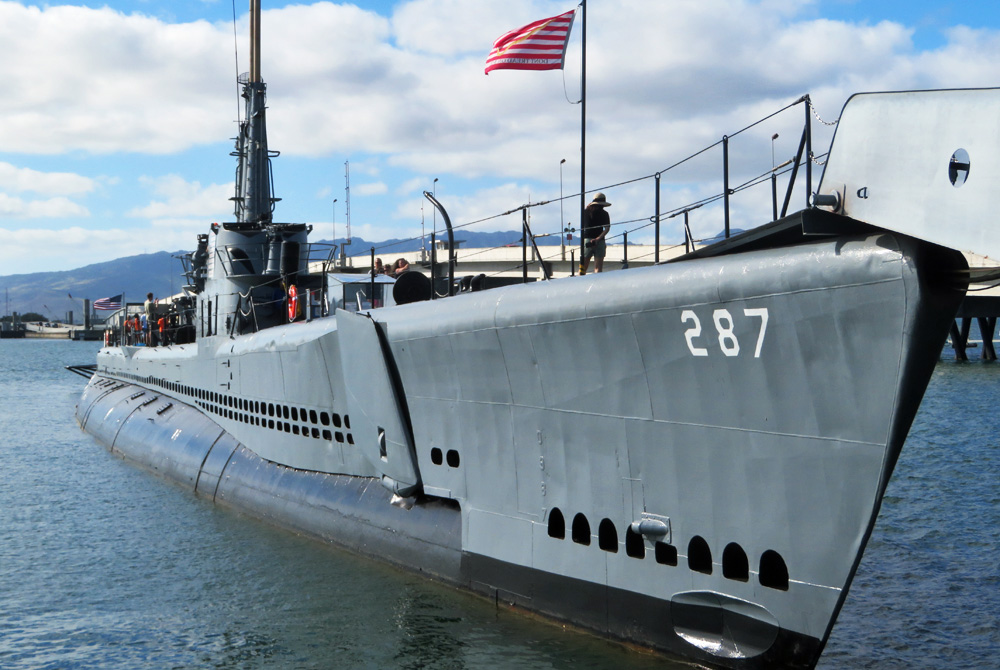 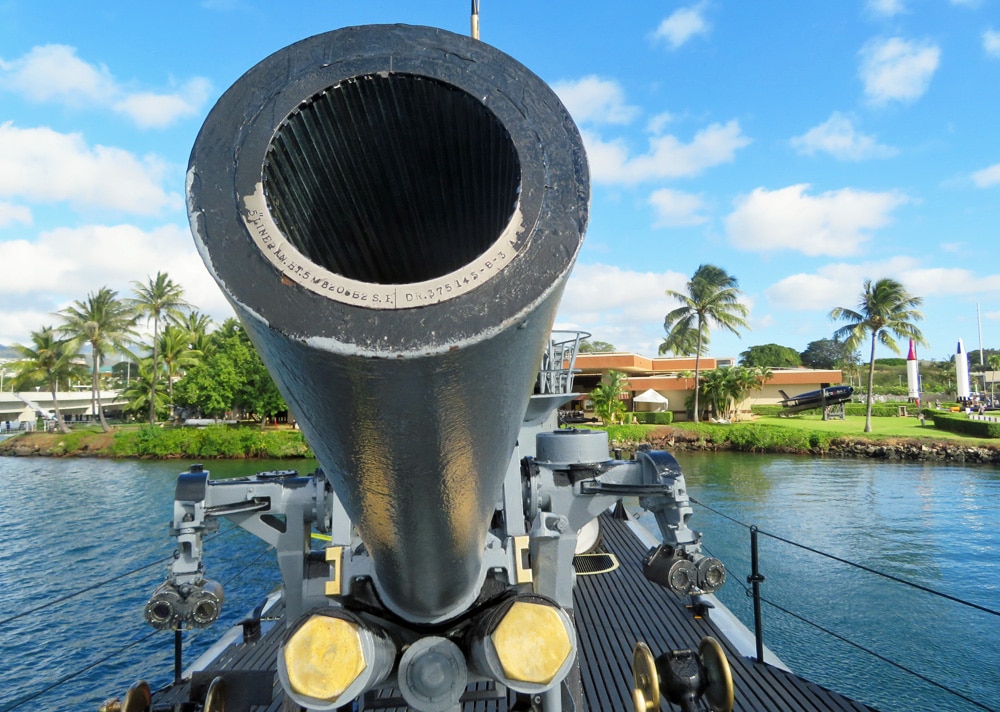 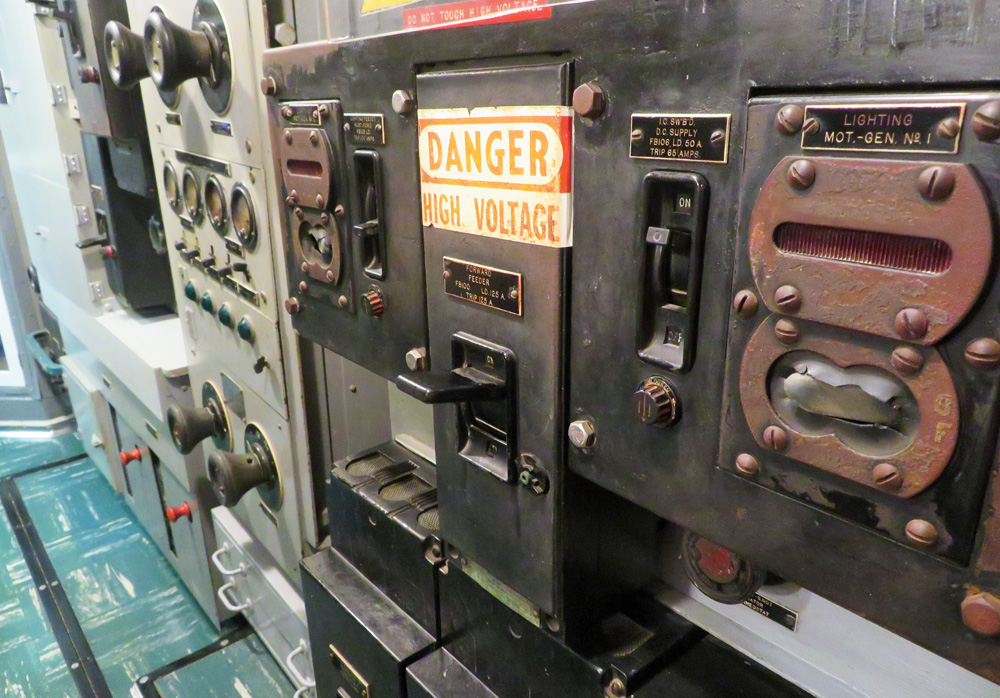 Outside the Bowfin are several torpedoes and missiles from the same era. There’s also a quad gun with four huge barrels. 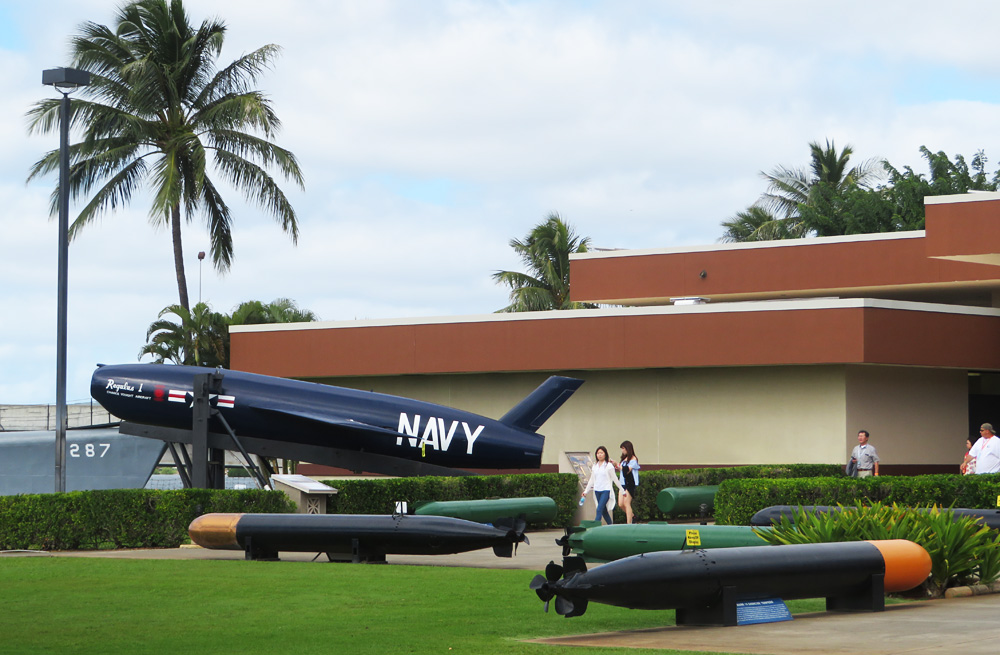 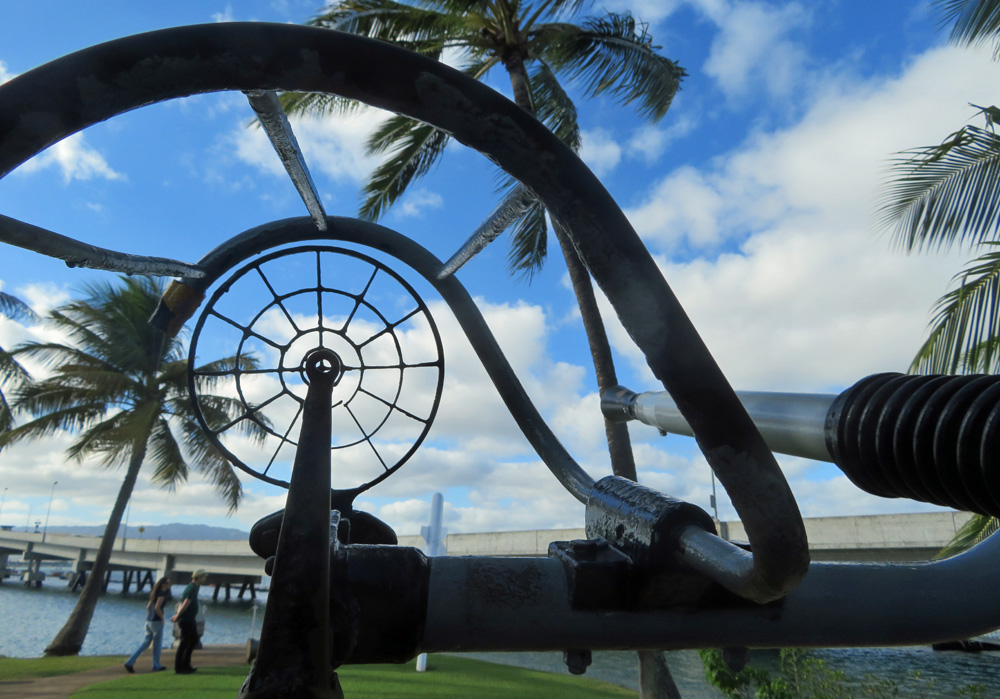 Here’s one of the most unusual and sinister items on display. It’s a Japanese suicide torpedo. The torpedo was large enough to fit only a single person. The pilot hunkered down inside a small cockpit and used a periscope and radio signals to find its target. 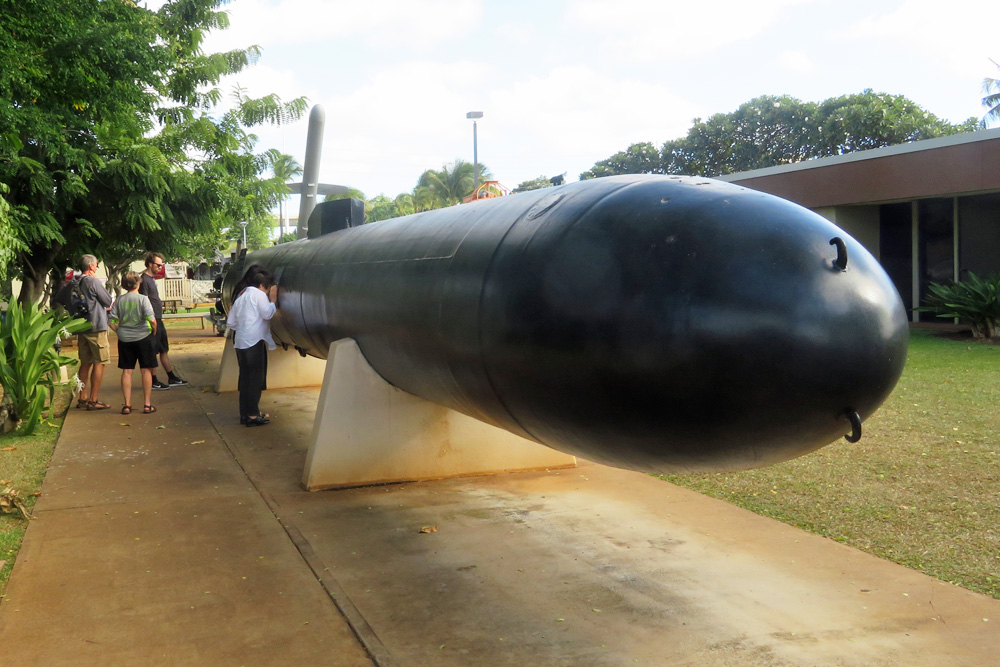 The suicide torpedo could travel about 50 miles per hour and would launch four miles from its target. Nine separate groups of suicide torpedoes were launched during the war. They were successful in taking down a couple of American ships, but the total number of Americans killed from them was not much more than the number of Japanese pilots who died in the suicide attacks. 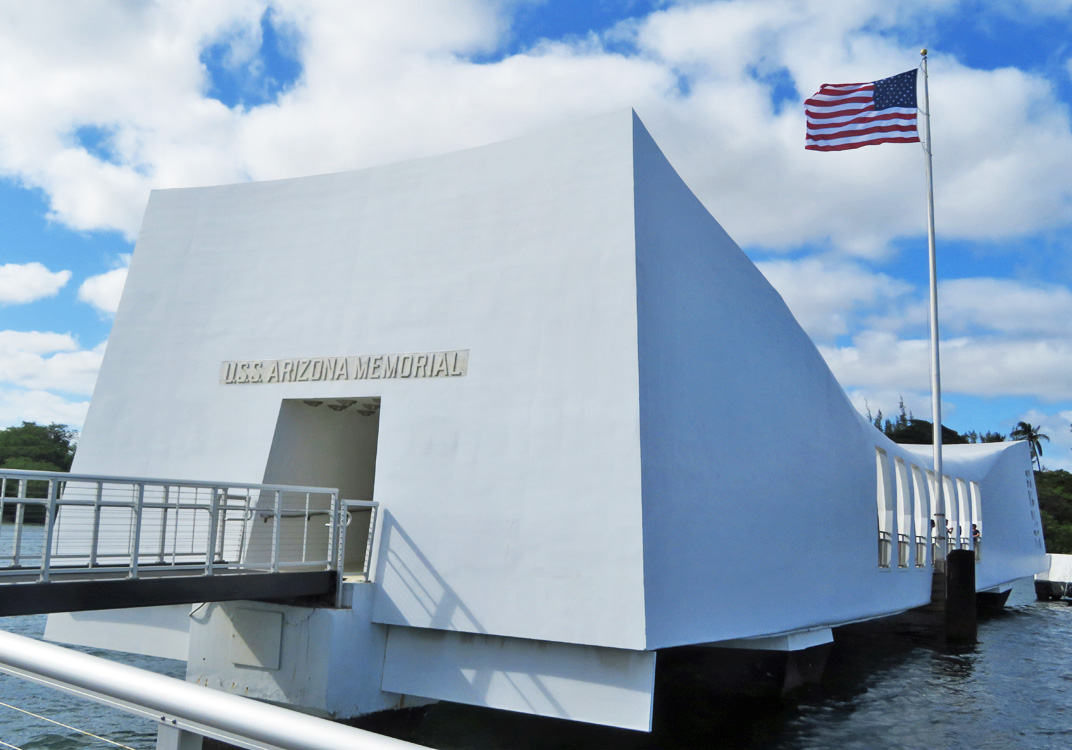 Looking for some tips for visiting Pearl Harbor? You can pre-book Pearl Harbor tickets as part of a group tour with various companies online. Those are sometimes quite expensive, but they do guarantee you entry. You can also just show up and pick up a free first-come, first-serve walk in ticket to the Arizona Memorial.

I visited on a Tuesday afternoon and had no problem getting a ticket, though I had some friends who tried the same tactic on a different day and didn’t get in because the full allotment of 1300 daily tickets had already been given out.

While the USS Arizona Memorial is free to visit, the other attractions are pretty expensive if you choose to see them all. The Pearl Harbor site offers package discounts, or you can visit the Aviation Museum for $25, the USS Bowfin for $15, and the USS Missouri for $29. (Prices accurate as of February 2018.)

I highly recommend seeing at least the USS Arizona when you’re visiting Pearl Harbor. It’s not often you get to experience such a huge part of American history up close.

How can you get to Pearl Harbor? Honolulu’s official public transportation is called TheBus. Yes, that’s its actual name. While cheap, buses run infrequently and can take an hour from Waikiki. So you’ll probably want to drive a rental car.

If you’re coming straight from Daniel K. Inouye Airport, the distance from the Honolulu airport to Pearl Harbor is about three miles by vehicle. That means it only takes roughly 10-15 minutes to drive there, accounting for traffic and red lights. You could walk there if you were really motivated (that would take an hour). Or just take an Uber or Lyft. 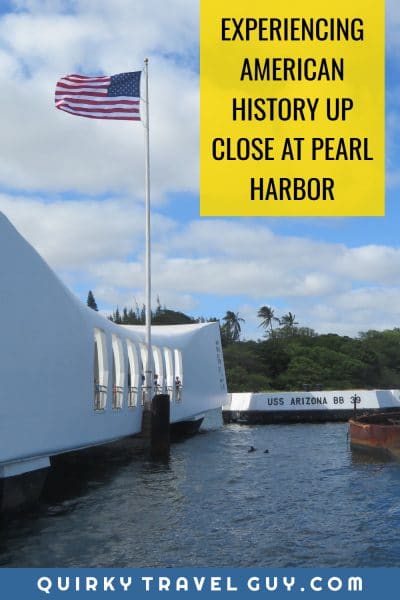 Things to See and Do in Hawaii Volcanoes National Park

Hiking One Mile Straight Up at Oahu’s Koko Crater Trail