As I frantically rifle through my sock drawer during yet another last-minute packing marathon (maybe someday I’ll learn…), I come across a sock with a hole in it and my eyes light up. Score! Further searching reveals another pair of socks that are stained and should probably be thrown out. Woohoo!

I’m excited to find socks that are ready for the garbage. That’s because I have this weird travel packing hack, and I wonder if I’m the only one who does it.

It goes like this: On any trip, I take as many ready-for-the-trash clothes as I can find. Then, when I arrive in the destination, after I wear them, I toss them out, thus freeing up space in my suitcase for the return voyage. Genius, or insanity? 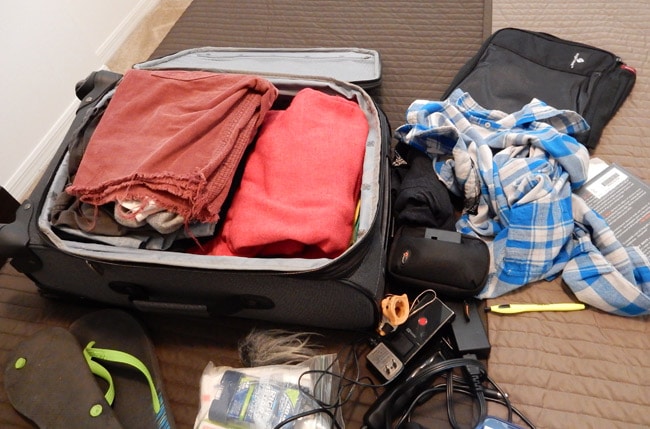 Now, lest you think that I spend every vacation looking like a bum in my rattiest, dirtiest clothes, I should note that there are some limits with this technique. I mostly use it for socks and underwear. Occasionally, I do it with tshirts as well, but only if I’ll be wearing the tshirt under a jacket or flannel.

Basically, if it’s an article of clothing that people won’t see, then it’s fair game. I wouldn’t do this with outerwear, pants or regular shirts. I still want to look presentable to the general public, after all!

Inevitably, on any trip, you return with more in your possession that when you left. It makes me feel a sense of accomplishment that I can maximize my efficiency by creating space for the souvenirs and other purchases. On most trips, I only find one or two pairs of socks or undies to discard. That doesn’t free up a ton of suitcase space, but at least it’s something.

But on my recent trip to Miami, I took this technique to a new extreme. Having just purchased a bunch of new boxer briefs, I was ready to clean out my intimates drawer, so I brought along four pairs of, shall we say, “vintage” underwear, including some really old American Apparel briefs that I haven’t worn in ages but was just keeping because they were fun and colorful.

Factor in a couple pairs of socks and an old tshirt as well, and I ended up leaving behind a fair-sized amount of my wardrobe in Florida. It’s funny sometimes when you track the journey of clothing. I didn’t imagine when I bought a pair of stylish briefs long ago in Chicago that someday they’d meet their fate in a garbage bin in Little Havana. But such is life.

I mentioned this packing technique to one of traveling friends, and she said she does the same thing, so I know I’m not the only weird one out there. Does anyone else have any weird or unusual travel packing hacks or tricks?