The views at Colorado’s Black Canyon of the Gunnison National Park are more impressive than those at the Grand Canyon. 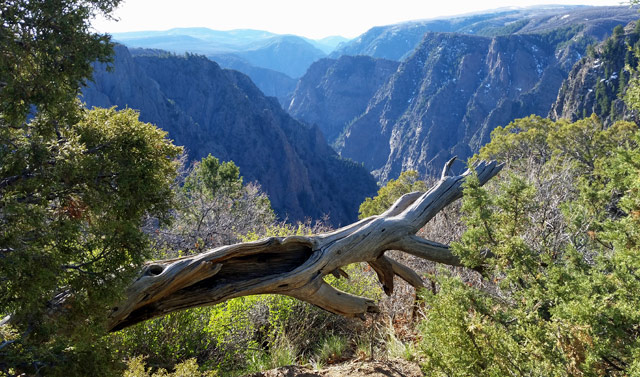 Now that I’ve committed travel writer heresy, I’ll qualify that statement by saying that I’ve never been to the South Rim of the Grand Canyon, the side that is best-known for its stunning views. I only visited the North Rim, which is cool in its own way but doesn’t necessarily have those postcard viewpoints.

Still, those views did not blow me away as much as what I witnessed at Black Canyon, which I am now convinced is America’s most underrated national park.

Why the views at Black Canyon are so cool

Here’s one thing Black Canyon has on the Grand Canyon: The drops are steeper. Look at this graphic from the NPS brochure, showing how the Grand Canyon is up to 18 miles wide at some points. Black Canyon is way narrower, meaning that the canyon itself is much more of an immediate dropoff. When you step up to a lookout, you are looking straight down a half-mile into the earth. 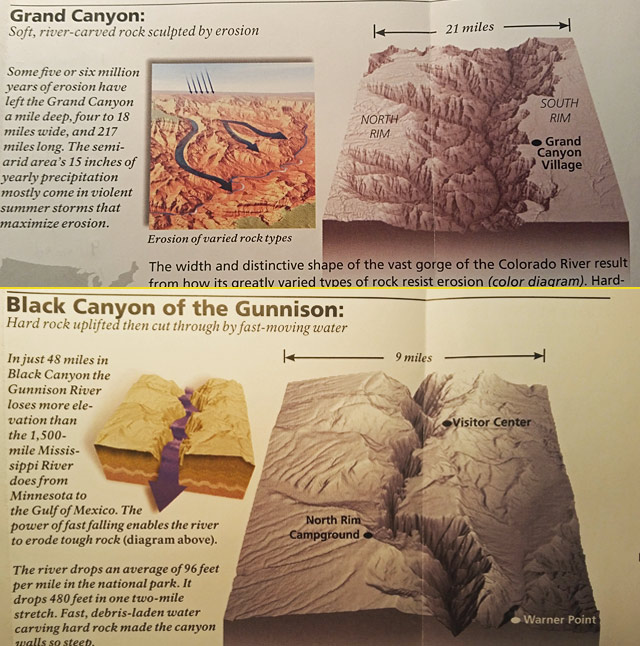 Another difference? While the Grand Canyon road basically reaches the rim and stops, at Black Canyon of the Gunnison, the road follows right along the mountainside, hugging the rim for seven miles. Along the way, there are a full dozen official overlooks, each of which presents slightly different scenery. Advantage, Black Canyon National Park. 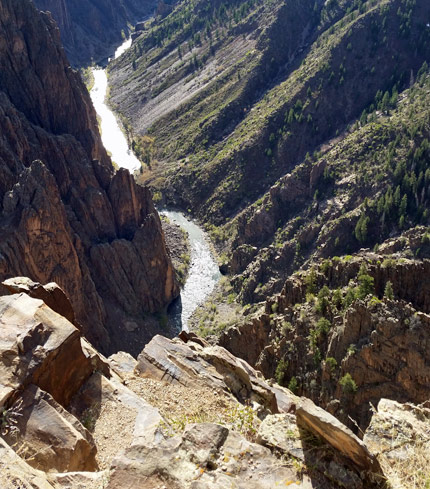 Confession: I almost didn’t come here. I had read about Black Canyon and looked at online photos, but the pics never really impressed me that much. They all looked gray and boring. Did I really want to drive all the way to Montrose or Crawford, Colorado to see this park?

It turns out that photos just cannot possibly do this place justice. Being here in person, seeing the way the sun hits the rock, breathing in the crisp, fresh air… it’s a far more fulfilling experience than you’d imagine from looking at a brochure. 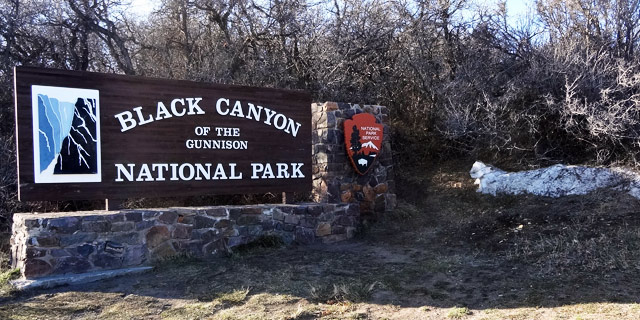 Like the Grand Canyon, Black Canyon has a North Rim and a South Rim. You’ll probably want to visit the South Rim, because seeing the North Rim requires driving on a gravel access road that is closed in winter. The North Rim does have a campground and six official viewpoints, but the vast majority of visitors head to the South Rim, which has a paved road all the way.

Here’s a look at the main road through the park. You’ll drive into the park from the bottom of this map and head north on South Rim Road, stopping at the viewpoints on the way.

READ NEXT
48 Hours in Banff National Park: A Suggested Itinerary 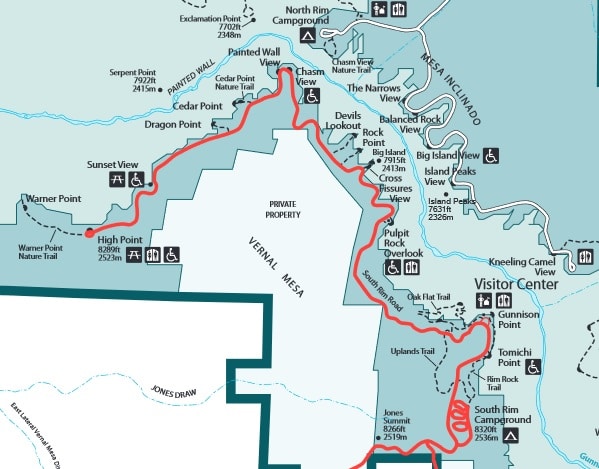 One cool thing about the Black Canyon is that you can drive all the way down to the Gunnison River at the center of the Canyon. East Portal Road, which typically opens in April, winds its way from the South Rim entrance road for several miles right down to the river. 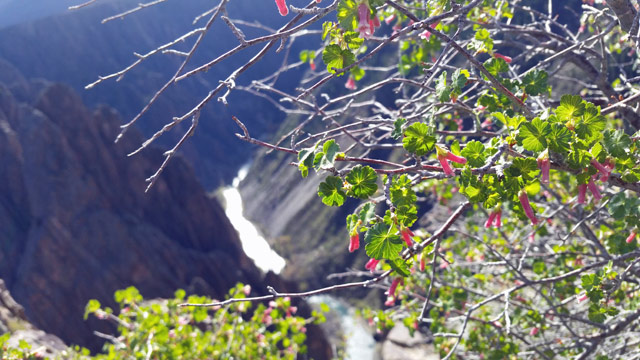 Enjoy the views from the overlooks. And consider adding Black Canyon of the Gunnison to your list of must-see destinations, because it truly is America’s most underrated national park. 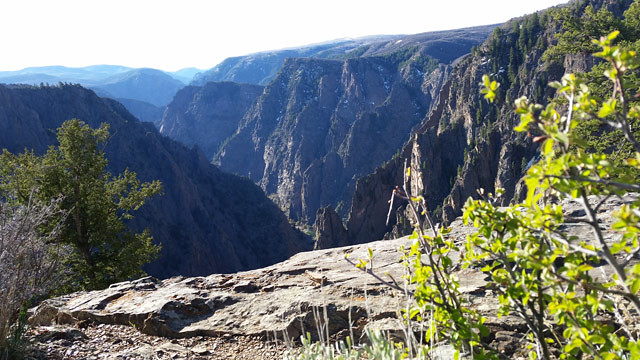 An awesome feature about Black Canyon is that the overlook viewpoints go right to the edge of the canyon. Sometimes they even jut way into the canyon, like these overlooks on small pieces of rock that extend out into the void. 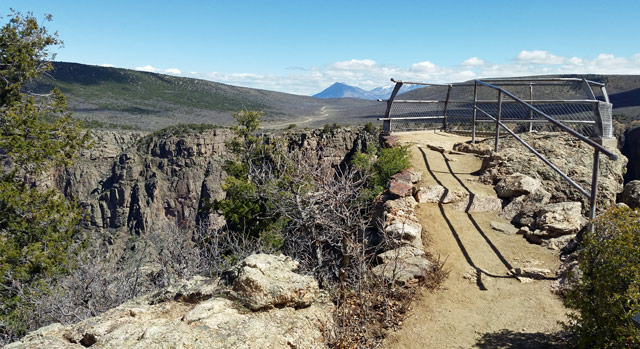 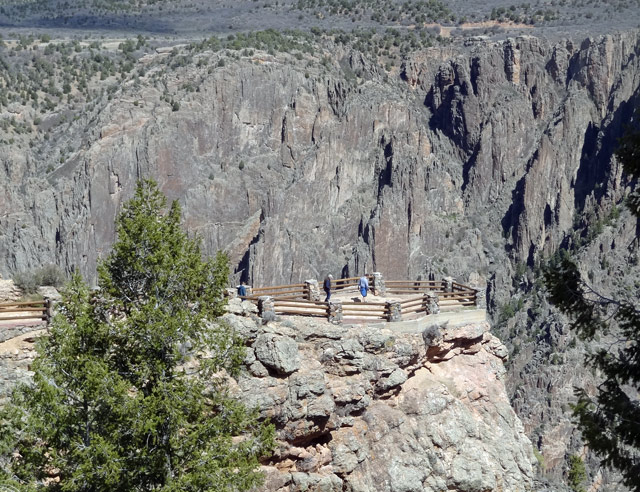 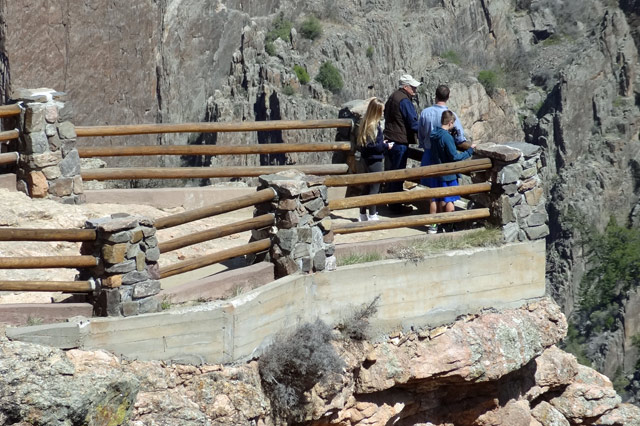 Getting stunning canyon photos from roadside overlooks is one of the most fun things to do in Black Canyon of the Gunnison National Park.

At the Grand Canyon, it’s hard to actually see the water down below. Here, you can glimpse the river from several different angles. 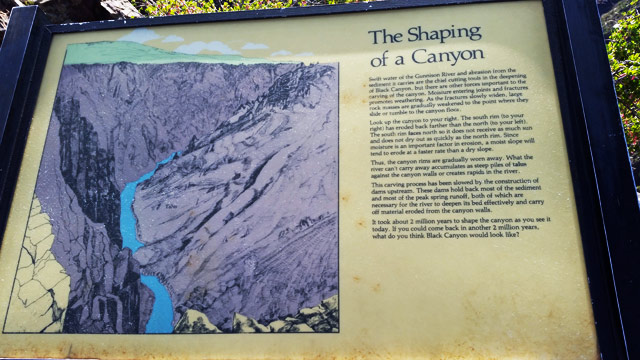 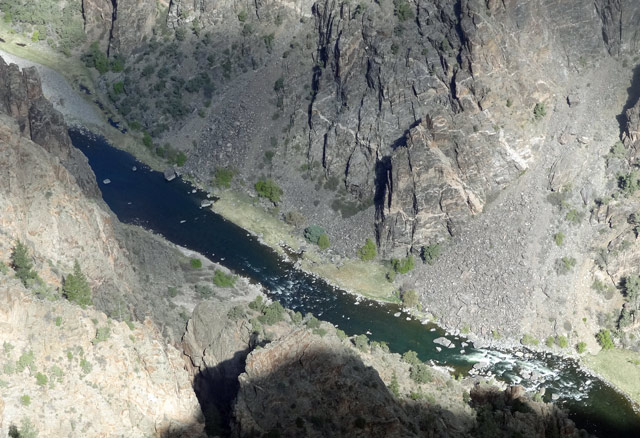 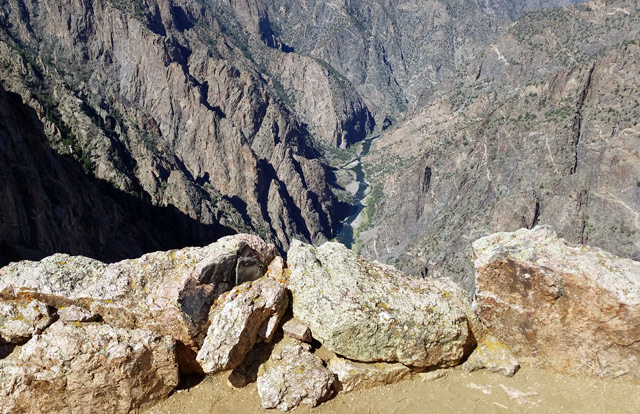 Remember that it’s a massive drop from the overlooks to the ground below. So don’t kill anyone, ok? 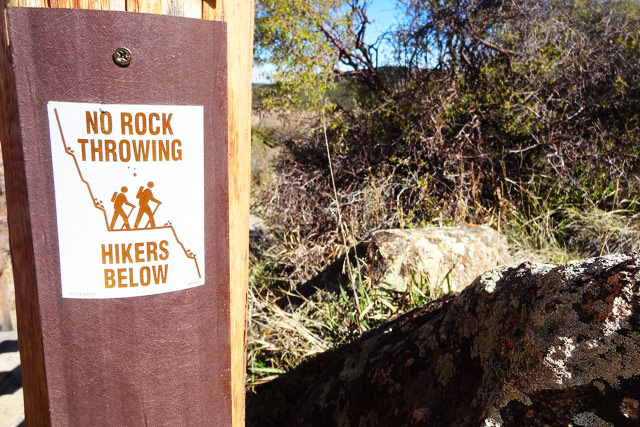 You’ll definitely want to take some selfies here. If you’re traveling alone, take advantage of the rocks and set up your camera on a timer… 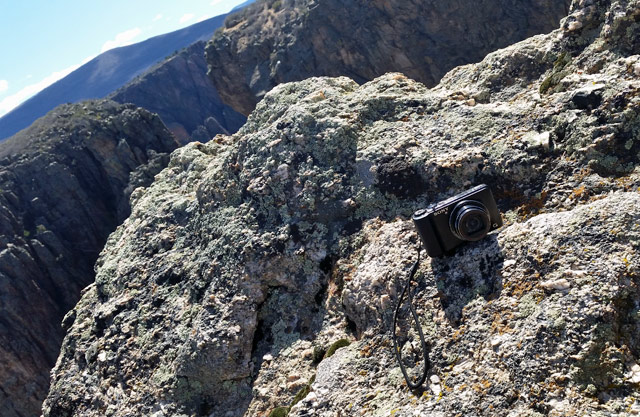 And then you’ll end up with victorious shots like these! 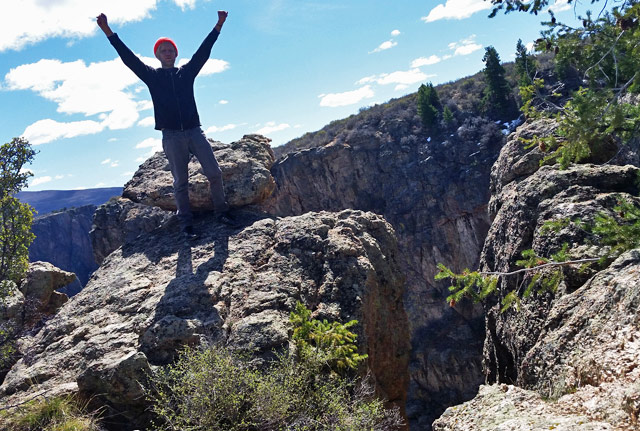 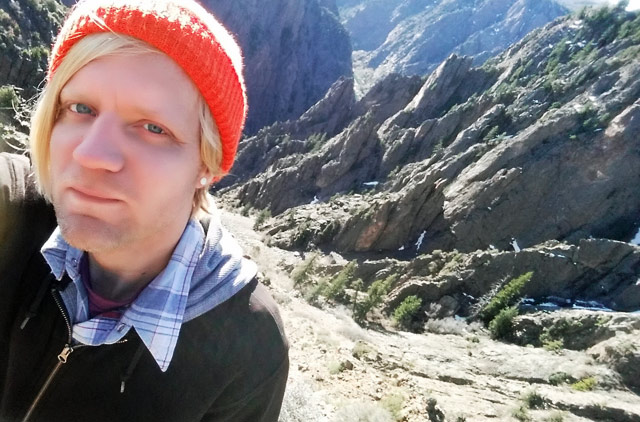 My mascot Soxie the Troll had to get into the action too. 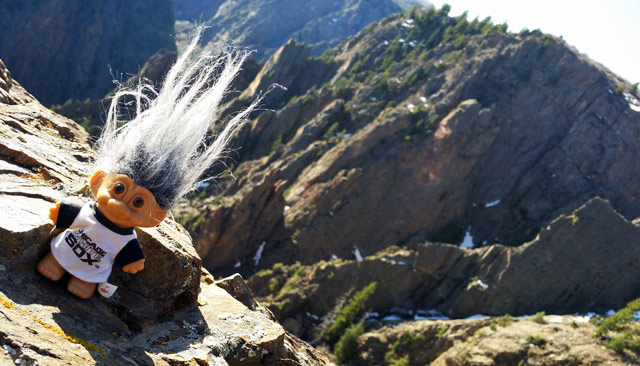 One of the most popular overlooks is called The Painted Wall. It’s a spot where you can see the various colors inside the rock on the opposite side of the canyon. How were these odd designs created, you ask? A billion years ago, molten rock squeezed into cracks in the existing rock. Once it hardened, the rock had its unique coloration. 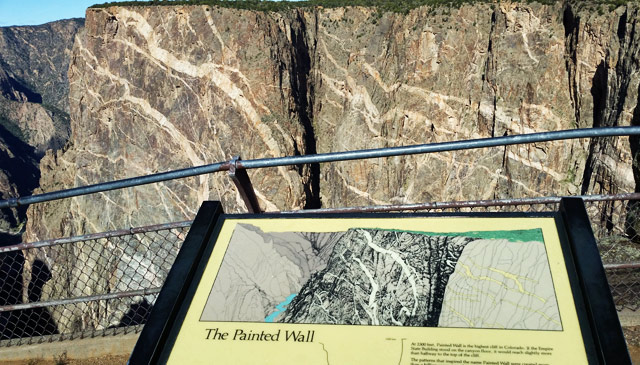 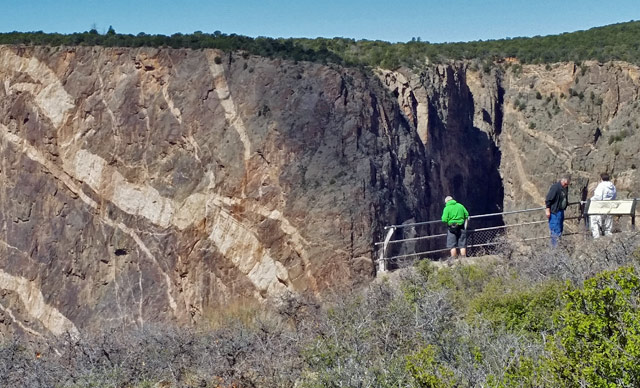 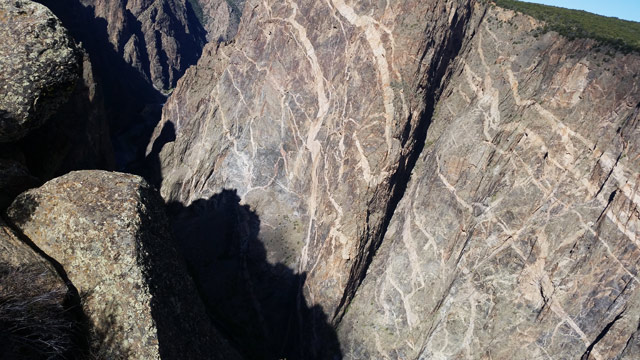 At Black Canyon, cool views are all around. One of the best things about being in Colorado is the snow-capped mountains in the background, which can even make my rental car look majestic. 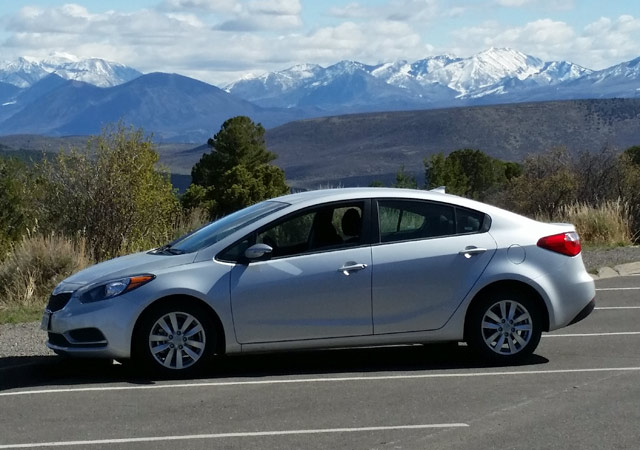 More views inside the canyon. Some parts of the canyon are just barren rock, and others are totally forested habitats. 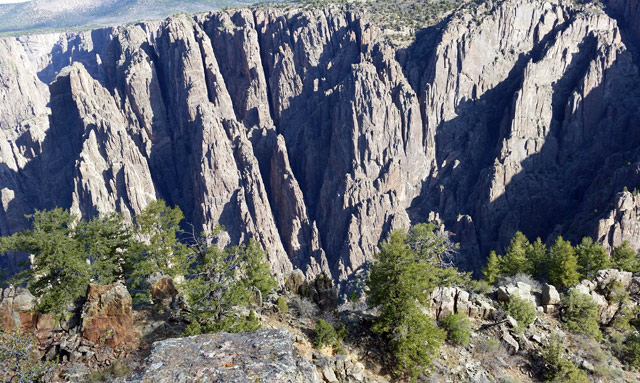 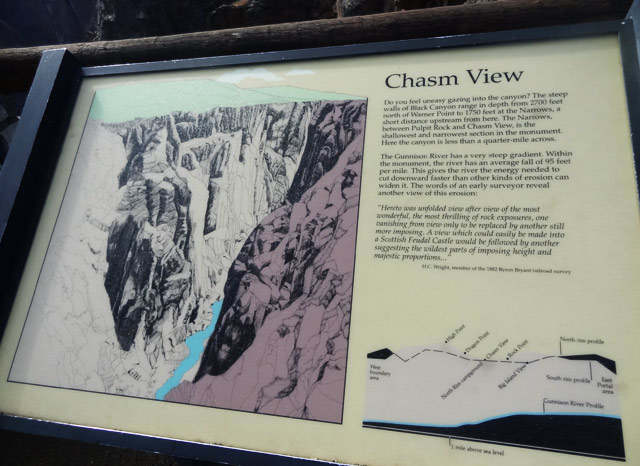 Things To Do at Black Canyon of the Gunnison National Park

In addition to the incredible views from the overlooks, what else can you do at Black Canyon of the Gunnison? Here are a few ideas.

Hiking. There are trails that follow along the top of the canyon rim, and there are others that go down inside the canyon. I took a short walk on Oak Flat Trail, which goes down into the canyon. But I didn’t go very far since the path was still icy in April. It was still cool to get inside the canyon a bit for a different perspective. Scroll to the next section for some recommended hikes.

Scenic drives. As noted above, South Rim Road is the main drive through the park. Follow the road as it hugs the canyon for several miles. Dragon Point at the end of the road is a great lookout spot. When the weather cooperates (aka summer), take the winding East Portal Road all the way down to the river to get some tremendous views looking up at the canyon walls. 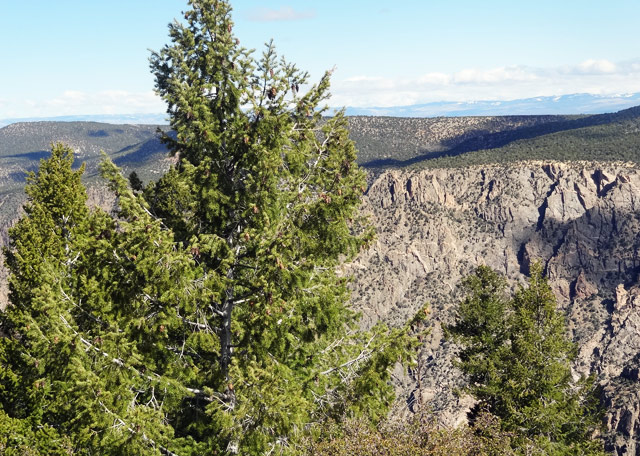 Visit the North Rim. To visit the less-traveled North Rim, you’ll need a reliable vehicle capable of driving six miles of gravel road. If you’ve got that, you can take that road to catch some great photo opportunities. Many of the cliffs on the north side drop straight down almost vertically. North Rim Road is closed except during summer.

Camping. One of the obvious things to do at Black Canyon of the Gunnison is to go camping. You want to experience the great outdoors while you’re in Colorado, right? The South Rim has 88 campsites, while the North Rim has just 13 and East Portal has 15. Some have electric hookups, and some can be booked in advance while others are first-come, first-serve. Find out more here.

Kayaking and fishing. If you do venture down to the river, you’re allowed to fish and kayak. The waters contain lots of large trout for anglers. As for kayaking, some sections of the canyon are Class V rapids and are recommended only for extremely accomplished kayakers. 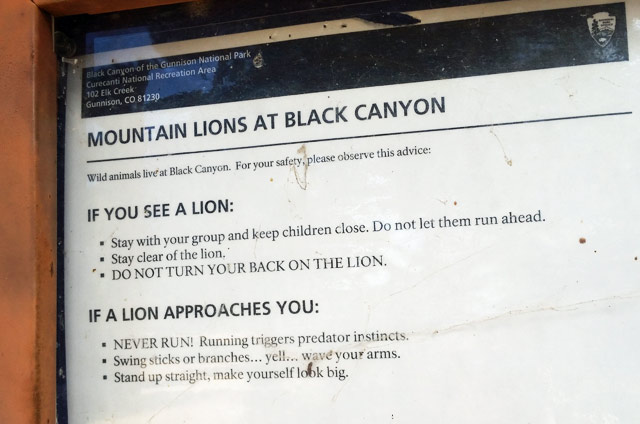 Wildlife watching. Black Canyon is home to mountain lions, black bears, elk, deer, coyotes, and marmots. I only saw smaller animals like squirrels, chipmunks, turkey, and rabbits. And birds, plenty of birds! Look for peregrine falcons in the Painted Wall area, as well as golden eagles, hawks, and vultures. There are non-venomous snakes in the park too. 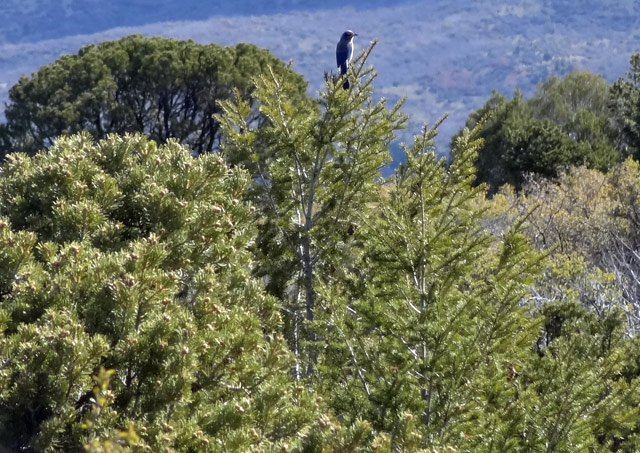 A bluejay enjoys its view atop a tree at Black Canyon National Park.

Other activities possible at Black Canyon include star watching, rock climbing, and picnics. You’ll probably want to stop by the visitor center for maps, water, and a bathroom break. Unfortunately, there are no restaurants or food services inside the park. 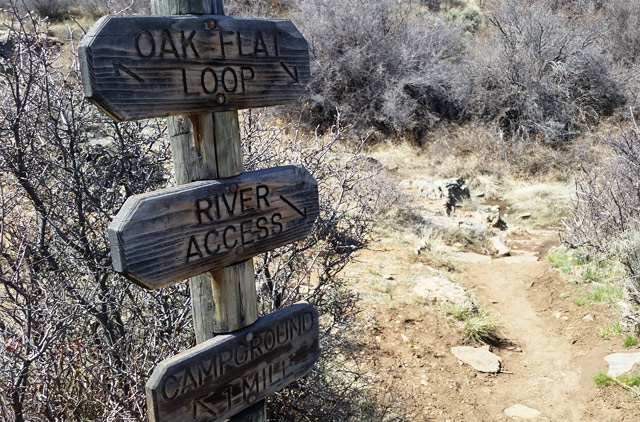 Have you ever visited a massive canyon before? 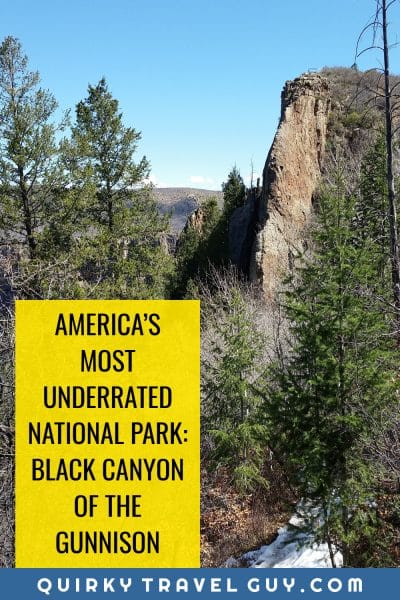