Like the Everglades, the vast majority of Great Sand Dunes National Park in Colorado is not accessible by vehicle. The main road only goes a couple miles into the park, and then it becomes a dirt road requiring a 4-wheel drive truck, and then the road ends entirely.

So if you’re searching for things to do in Great Sand Dunes National Park, what options do you really have? Besides climbing the dunes themselves – which is an awesome activity you should spend a couple hours doing! – you have basically three options for sand dunes activities. One, you can hang out at the Visitor Center and look at the exhibits or scan the dunes through binoculars. 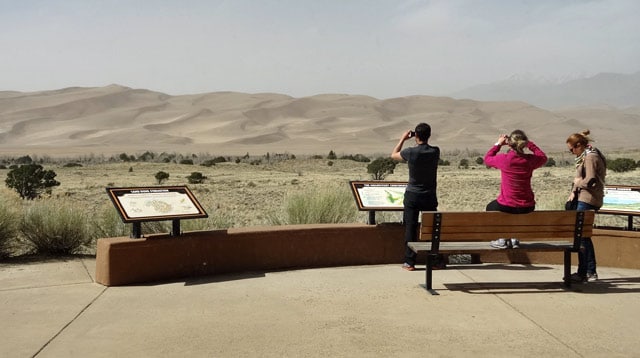 Two, you can go camping at the park campground or even within the dunes themselves (get a permit in advance). Third, you can hike some of the trails.

I decided to embark on a quick hike. While the sand dunes cover a massive sea of sand that extends for 330 square miles and features pretty much nothing but dry sand, next to the dunes sits the Sangre de Cristo Mountain range, home of various ecosystems from montane forest to subalpine environments. Also present is wildlife like black bears, coyotes and bobcats. 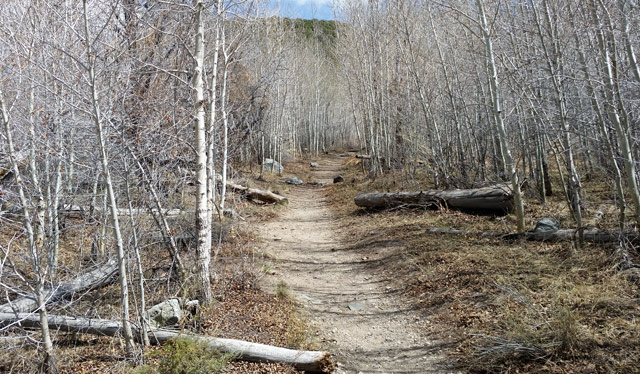 Lacking a 4×4 vehicle, I went to the one major hike that is accessible from the Visitor Center – the Montville Nature Trail. This forested trail is only a half-mile long, but it connects with the Mosca Pass Trail, which starts at around 8300 feet elevation and goes up about 1400 feet over a span of 3.7 miles to a peak of 9737 feet at Mosca Pass.

The beginning of the trail was mostly trees with barren branches, since it was too early in the season for new leaves to grow. There were scattered pockets of snow on the trail, which was strange since there were also cacti and other desert-style vegetation. I don’t think I’ve ever seen a cactus next to snow before. 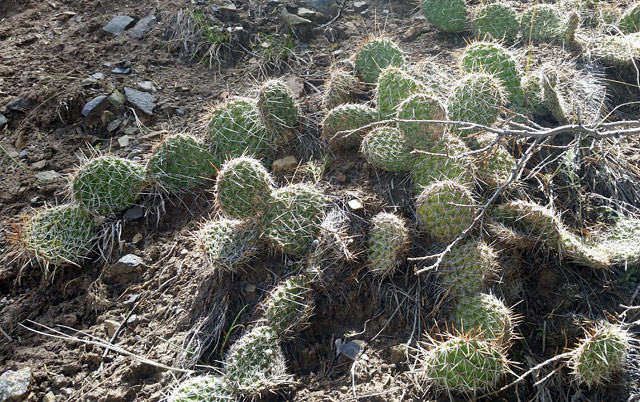 It is estimated that humans first crossed Mosca Pass around 12,000 years ago. A tablet on the trail is dedicated to the pioneers who traveled across the pass to settle in the San Luis Valley. A toll road was established in the 1870s to charge $2 to any wagon that came by. Back then, $2 was the equivalent of two full days of wages, so that was a hefty toll. 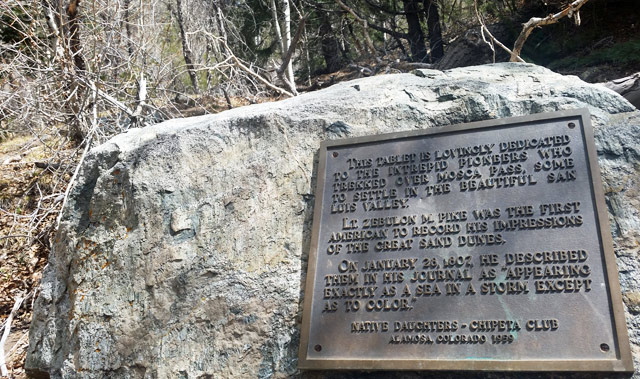 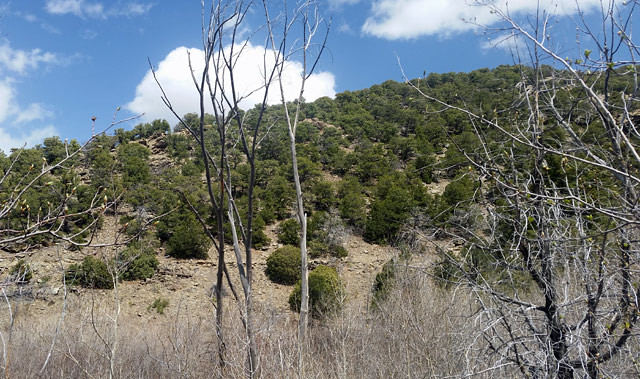 I went a mile or two up the Mosca Pass Trail before I had to turn around, but I definitely got my money’s worth out of the hour or so I was able to spend hiking in the forest. Then it was time to go back down, and that’s when things got interesting – and not just because I could spy the dunes from far away. 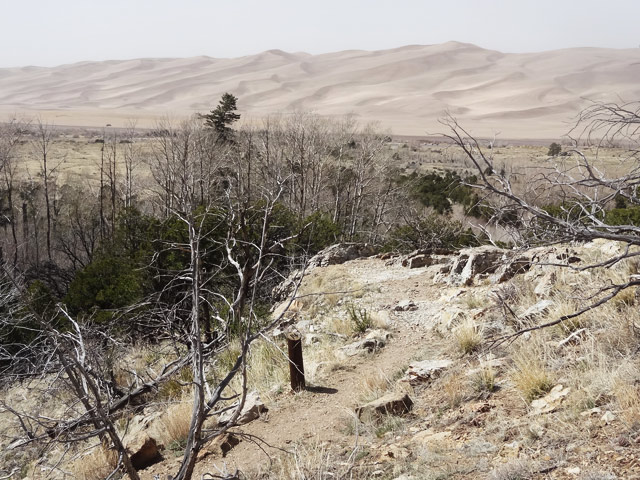 I was the only one on the trail, which was surprising since national park hiking trails are usually fairly crowded. The solitude was cool, but then I started to became worried about bears. Even though black bears aren’t as fierce as grizzlies and usually run when they spot humans, you never know what can happen.

Especially since it was April, around the time that bears come out of hibernation. The last thing I needed was a starving bear to decide that I’d make a fine meal to replenish some of those lost winter pounds.

Of course, my fears were totally unfounded. Or were they?

On my way back down the trail, I saw this: 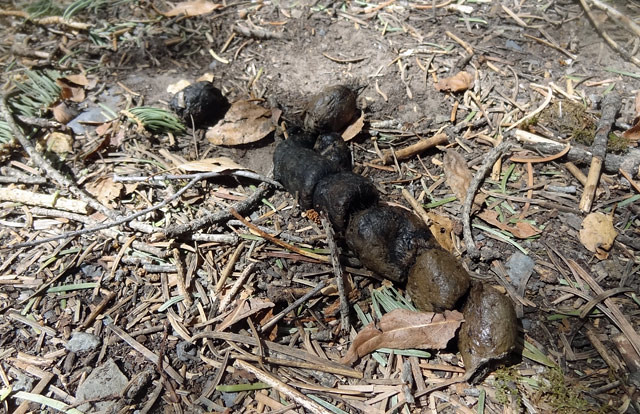 Scat from an undetermined animal. Why didn’t I see this on the way up? Did I really miss a huge pile of poo that had been sitting in the middle of the trail? Or had it been deposited there in the 20 minutes since I walked past – and if that’s the case, where exactly was the animal that left it behind?

This was at least somewhat fresh – flies were buzzing around on it. It could be a dog, but why would a dog owner leave his pet’s waste right on the trail in a national park? No, it would have to be something else – maybe a coyote, mountain lion, or bear.

The mountain lion option terrified me, because throughout the hike I had seen numerous rock formations and small caves and dens that would make for absolutely perfect lion habitat. In situations like this, I can never keep my mind from running through potential headlines (“First hiker ever killed by mountain lion in Great Sand Dunes National Park.”) and subsequent message board discussions (“It’s his own fault… he shouldn’t have been hiking alone!”) 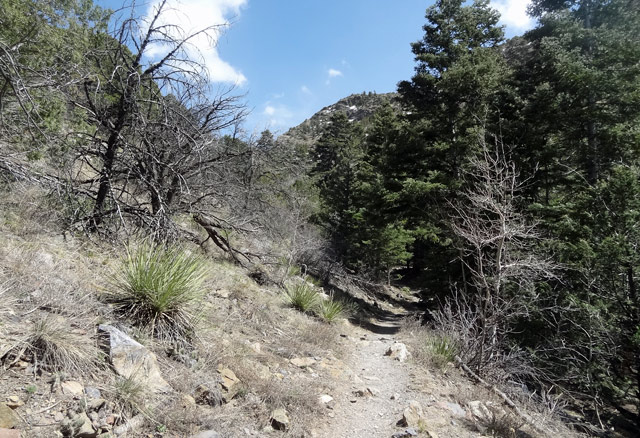 In any event, I went back down as expediently as possible and never saw the critter that chose to defecate in my path. After some further Googling, I’ve surmised that the scat most resembles that of a bobcat. I could be wrong, but that’s what I’m going with.

I’m totally cool with that, because bobcats are small enough that they wouldn’t have posed a serious threat to me. I can rest easy knowing that my life wasn’t in danger.

As mentioned above, camping is one of the coolest sand dunes activities. There is one campground inside the park – Piñon Flats Campground. It’s open from April 1 to October 30, and campsites can be reserved up to 6 months in advance. The campground offers cool views of the great sand dunes and the Sangre de Cristo Mountains.

Piñon Flats Campground can host up to 88 sites for tent or RV campers. There are restrooms with sinks and toilets, but no electric hookups. Black bears live in the area, so campers should exercise caution and keep their food away from their tents.

The NPS warns that all spots in the campground will be full in May and June, when Medano Creek is at its strongest. That’s a small creek running through the park that varies in size depending on the time of the year. People come to play in the water and sometimes even float with intertubes if it’s deep enough.

Some campgrounds exist outside the park boundaries, but those also fill up during peak summer months. The NPS strongly suggest visiting on weekdays if possible.

Other Things To Do at Great Sand Dunes National Park

Of course, the main reason to visit Great Sand Dunes is to climb the dunes themselves. Wear closed-toe shoes in the summer, because the sand can reach temperatures of 150 F (65 C) when it’s constantly in the sun. You do not want to be walking on the dunes in flip flops with those temperatures at your feet!

Sandboarding and sand sledding are very popular. If you want to indulge, make sure to bring a sled made for sand use. Winter sleds typically don’t work since the sand is so dry. The NPS doesn’t rent sand boards, but some retailers outside the park boundaries do.

If you have a 4WD vehicle, you can explore some of the park’s dirt roads. This is a great way for the off-the-beaten-path adventurer to get into some of the more remote sections of Great Sand Dunes National Park that most visitors never see.

You can also go backpacking off the trails if you get a permit. This is another cool experience – you can even set up a tent right in the middle of the dunes, hidden behind the ridges where the tourists will never see you!

For a more relaxing experience, stop at one of the picnic spots around the park. Horseback riding is another of the coolest sand dunes activities, but it’s only available to overnight guests of the Zapata Ranch.

PRO TIP: If you love road trips, do what I did and plan a road trip to several of Colorado’s parks, including Rocky Mountain National Park and Black Canyon of the Gunnison, which I consider America’s most underrated national park!