If you’re heading to that freaky swampland in South Florida, you’re probably wondering… where’s the best place to see alligators in the Everglades? On my recent trip, I got so close to multiple gators I could have reached out and touched them – if I wanted to risk having my hand bitten off, of course.

This is my chance to pass along a few tips regarding the easiest spots to see Everglades gators and other wildlife in the national park (such as Anhinga Trail.) Read on, my friend!

POPULAR EVERGLADES TOURS FROM OUR PARTNERS:

The Everglades are one of the highlights of a Key West to Miami road trip and one of my favorite U.S. national parks!

Things to know about the Everglades

Everglades National Park is the third-largest national park in the lower 48 states, behind only Death Valley and Yellowstone. It’s the only place in the world where alligators and crocodiles co-exist. 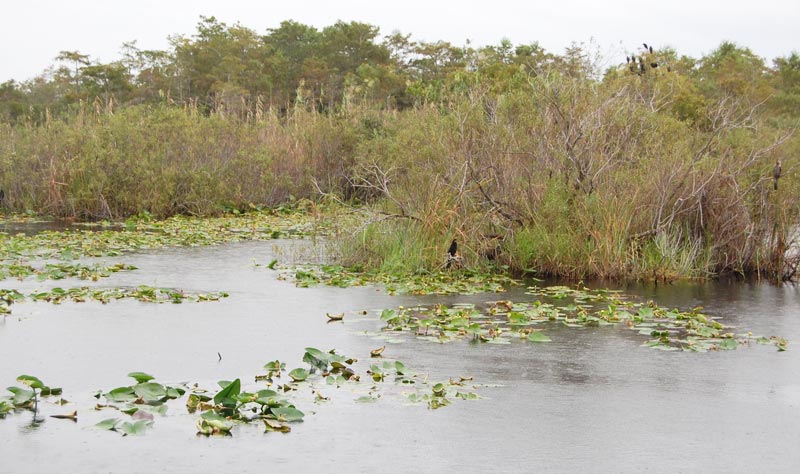 Most of the Everglades is unreachable by car or foot because it’s so swampy. In fact, only a couple of roads go into the park at all. There’s a 99-mile-long Wilderness Waterway on the west side of the park that can be ideal if you want to kayak or canoe in the backcountry. Otherwise, you’re stuck on one of the established roads.

Arriving at the Everglades

I can tell you that without a doubt, the most prolific animals in the Everglades are the mosquitoes. Without a strong DEET repellent, they are almost unbearable. 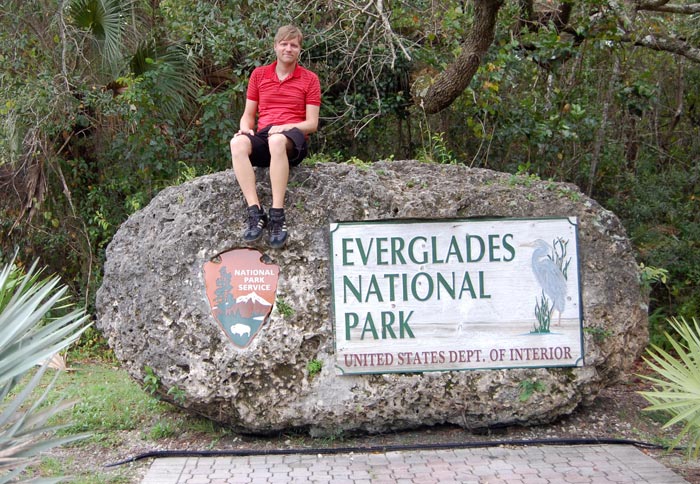 These mosquitoes are violent! I got out of the car for literally two minutes to take this welcome photograph, and when I got back inside I discovered that, in addition to the loads of bloody, dead mosquitoes I had smashed on my skin, I had acquired about a dozen huge bites, including four on my face.

Thanks goodness my hair was long enough to cover my forehead, or I would’ve spent the rest of the weekend looking like an acne-riddled teenager.

Fortunately, the welcome centers sell repellent, for people like me who forget to bring their own. The Shark Valley and Ernest Coe visitor centers are two of the most common entry points into the park.

Shark Valley is on the north end of the park, easily accessible from Miami. We stopped by the Ernest Coe Center in Homestead to pick up maps and information from the rangers about where to see alligators. 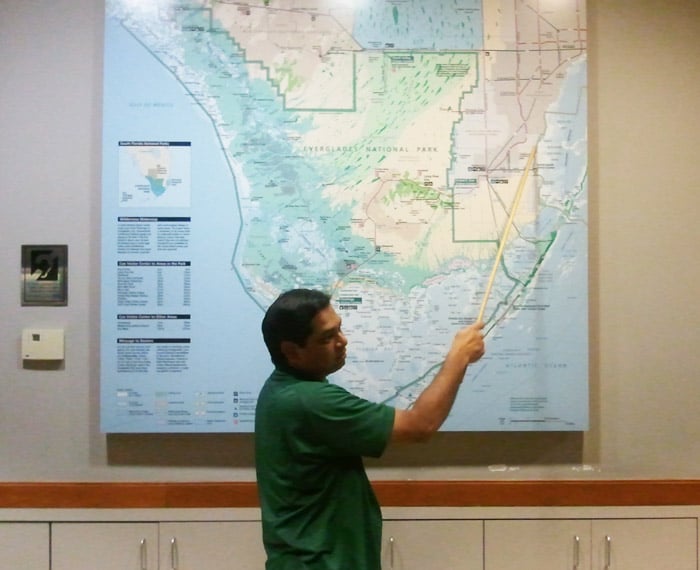 Where To See Alligators in the Everglades

You can take airboat rides in the Everglades (here’s a popular airboat ride day trip from Miami.) I was not eager to do that because many people feel the rides aren’t environmentally friendly, since they take loud vehicles into otherwise peaceful and unreachable areas of the Everglades.

A more eco-friendly option is the tram that runs on a set path near the Shark Valley visitor center coming into the northern edge of the park along Route 41.

You have a good likelihood of seeing gators on the tram trips, but you won’t be able to leave the vehicle, so you’ll have to settle for a far-away view. For the best chance of seeing them up close, the ranger suggested we check out the Anhinga Trail at Royal Palm, just a short drive from the Ernest Coe Visitor Center.

How many alligators are there in the Everglades, anyway? Recent estimates say about 200,000 gators in the park. That’s insane! And in the entire state of Florida, there are more than one million gators!

The Anhinga Trail is one of the most popular trails in the park. It’s a half-mile long path that weaves its way through a sawgrash marsh on an elevated platform. You can walk on the boardwalk and look down at the water and the vegetation, attempting to spot alligators as you go. 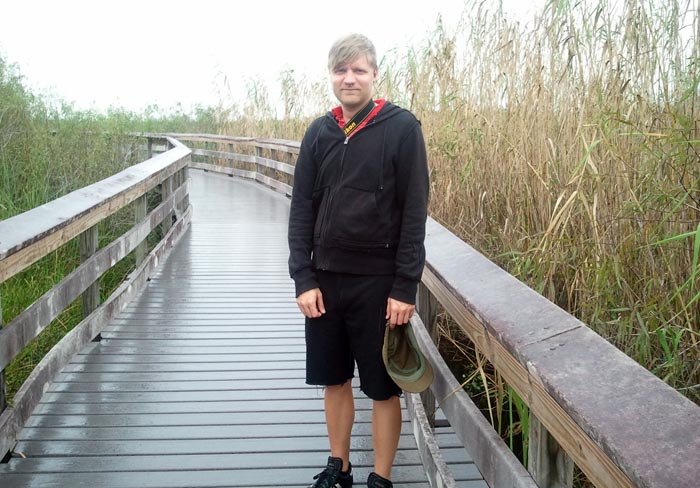 We took the left fork of the trail and followed it around, seeing no gators until we got near the end. As we went around a bend near a gazebo-like structure jutting out into the water, a passer-by pointed out a gator chilling at the surface of the water. My first alligator sighting! Score! We watched for a few minutes, but it didn’t do much. 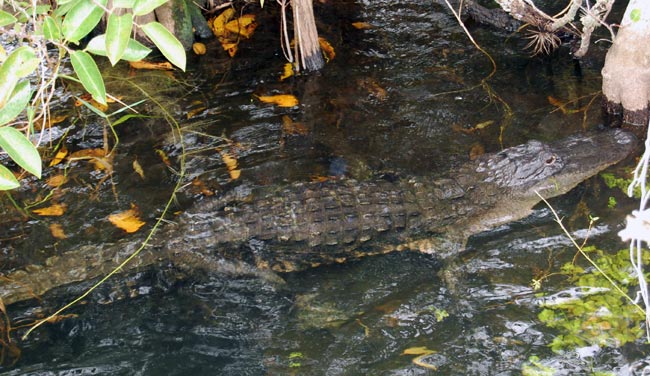 A bigger score came a couple of minutes later, when we followed the wooden path to its dead end. Right next to the trail sat three gators in a near-perfect single-file line. The gators lurked just behind the wooden fence. 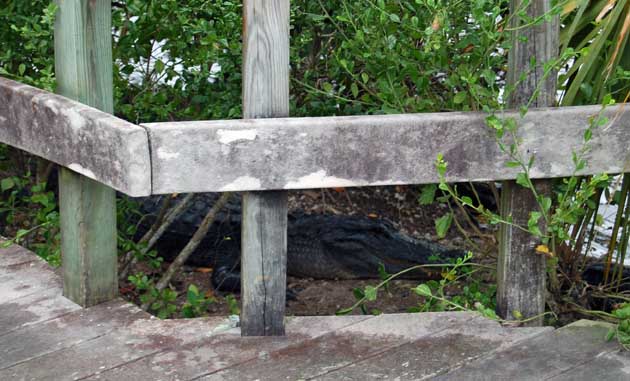 They were underneath the small trees, staying dry and avoiding the raindrops. 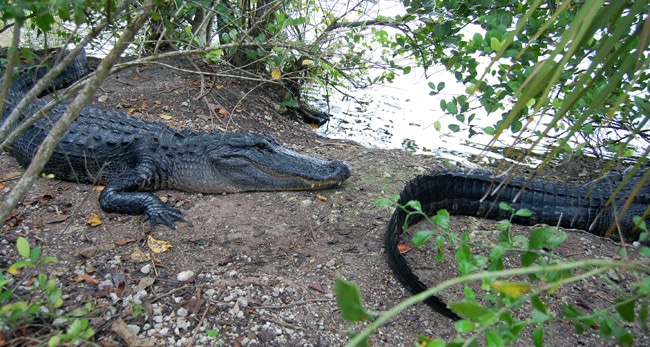 The gators were literally a few feet from me. At that moment, I was so thankful I hadn’t opted to pay $15 to ride the tram, because this close-up experience was a million times better. From this distance, I was fascinated by examining the scales and the humps in great detail. 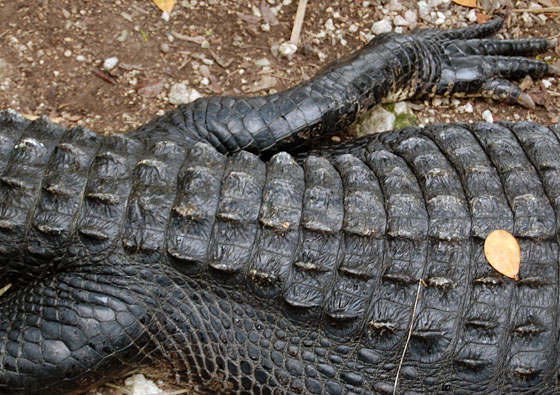 The alligators sat perfectly still, even as lots of Everglades tourists gathered around and took photo after photo. They were probably around 10 feet long each.

There’s no guarantee gators will always be in this exact spot, but it seems to be one of their favorites. To reach it, start on the Anhinga Trail and keep walking straight, avoiding all of the forks in the path. When you reach the very end, look around on all sides to see if any gators are nearby.

Are there any gator parks near the Everglades? Sure, there are plenty. I strongly prefer seeing the animals in their natural habitat in the Everglades as noted above.

But if you’re traveling with kids or are short on time and want a guaranteed way to see them up close, try this one, which is one of the top alligator attractions in Florida. Alligator Alley is another popular swamp sanctuary.

Other wildlife in the Everglades

I’ve never been a big fan of birds. I always skip the bird section at zoos. They’re just not unusual enough for me to care. But I admit that seeing a lone ibis, with its brilliant white feathers, standing in the swampy water was a beautiful sight. I almost began to develop a soft spot for these creatures. 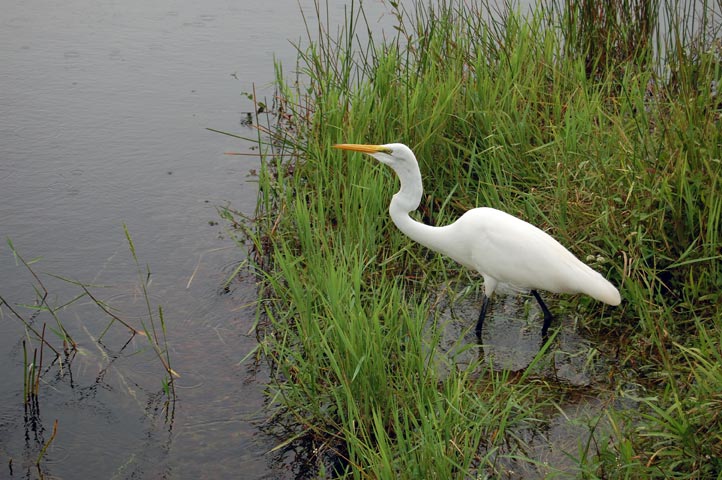 Photography enthusiasts can find lots of birds throughout the park, but particularly at the Anhinga Trail. You’ll also see vultures in the parking lot at the Anhinga trailhead, along with warning signs that these scary-looking birds may damage your car. Turns out they like to gnaw on windshield wipers.

If it’s turtles you’re after, Anhinga is also a good bet, though I didn’t personally encounter any. Manatees exist within the Everglades, mostly in the deeper water accessible by boat. Collisions with watercraft are the biggest threat to Everglades manatees.

So that leaves crocodiles and panthers. I have no first-hand knowledge about where to see crocs, but from what I’ve read, they are more secretive creatures than alligators.

Everglades crocodiles apparently prefer the coastal areas that are more accessible by boat. One Everglades croc, named Cleatus, swam all the way to Dry Tortugas National Park and lived there in isolation for years!

And where’s the best place to see panthers in the Everglades? Well… good luck with that. Panther sightings are extremely rare anywhere in Florida, so it’s going to take luck more than skill to see one.

It’s estimated there are only 100 of these creatures left, and most live north of the park in the Big Cypress National Preserve. None are believed to live in the Everglades, but they do pass through on occasion. 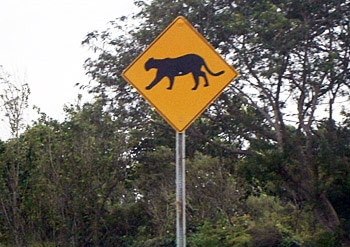 That said, there are panther crossing signs along the main road (Rt 9336.) Just don’t get your hopes up!

More Travel Experiences Near the Everglades

You may want to also consider checking out the Ten Thousand Islands, which border the western end of the Everglades and have a similar landscape. You can find boating, kayaking, and hiking there.

Or go camping at Florida’s remote Dry Tortugas National Park off the coast of Key West. It’s one of the most unique camping environments in the U.S.!

RELATED QUIRKY TRAVEL GUY POSTS:
Where to Go Gator Ziplining in Louisiana
Why I Don’t Fit in With Miami’s South Beach Nightlife

7 thoughts on “Where To See Alligators in the Everglades”