I have declined a few times already, because it’s not even 11 am yet. I’m already holding a strong mixed drink, and we’re only about an hour into an all-day cruise around Banderas Bay. I don’t want to get sick on a boat! 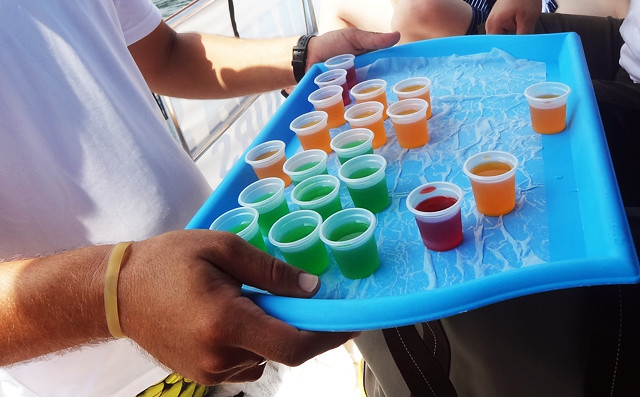 But the servers keep offering, so I will indulge in a handful of jello shots on this voyage. It’s hard to turn down free drinks, and it’s even harder amid the festive atmosphere of Diana’s gay and lesbian cruise, where the spirits are high and the bathing suits are small. 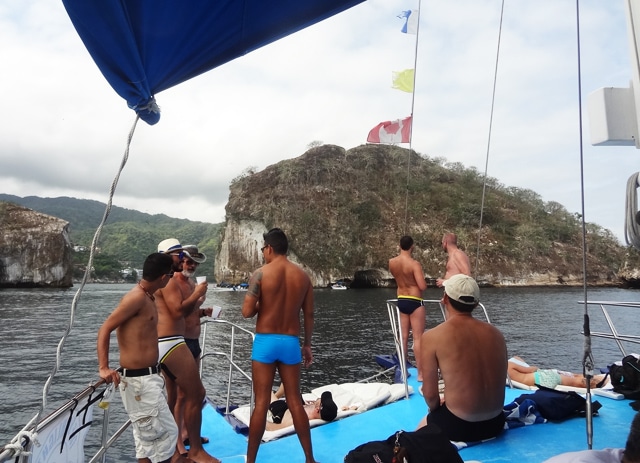 An astounding 97.2% of the Trip Advisor reviews rate Diana’s as a 5-star experience, which has to be one of the highest percentages in existence. For comparison’s sake, the South Rim of the Grand Canyon only gets an 85.2% five-star rate. There you have it – empirical proof that Diana’s Tour is 12% more enjoyable than one of the great wonders of the natural world!

Diana’s is just one of the reasons Puerto Vallarta is a first-class LGBT destination. Is Puerto Vallarta gay friendly? Yes queen, extremely! From the beaches to the businesses to the bars, here’s more proof that PV is a great gay getaway.

The most surprising thing about Puerto Vallarta might be its number of gay bars and clubs. There are probably between one and two dozen of them, depending on how you classify certain establishments – some places are more “gay-friendly” than specifically “gay.”

They have everything here, from friendly lounges with sidewalk seating to upscale rooftop martini bars to dingy holes-in-the-wall to strip clubs, gay saunas and bathhouses. Most are found in the Zona Romantica, the “Old Town” neighborhood which is especially welcoming to the LGBT community. If you’re staying in that area, virtually all of the gay bars will be within walking distance.

The hub of the gay bar experience is centered around two bars across the street from each other – Paco’s Ranch and CC Slaughters. Paco’s is the go-to place for a friendly drink and a drag show, while CC Slaughters (run by the same folks who operate the hugely popular CC Slaughters in Portland) is a good place to dance all night.

One easy to take in the nightlife is by hooking up with the Gay Vallarta Bar Hopping Tour, which runs a few times a week during tourist season. Generally, bar-hopping tours don’t appeal to me, because I figure that I can find all the bars on my own with a little bit of research.

But there’s a reason why this particular tour is so highly regarded. For one price (starting at $75 USD), all drinks, cover charges, tips, photos, and a full dinner are included.

Tour owner Christian and his team have relationships with the bars, so they can whisk you past the lines straight inside, where your drinks will already be waiting since they send someone ahead of time to place the orders. The operation is a model of efficiency. 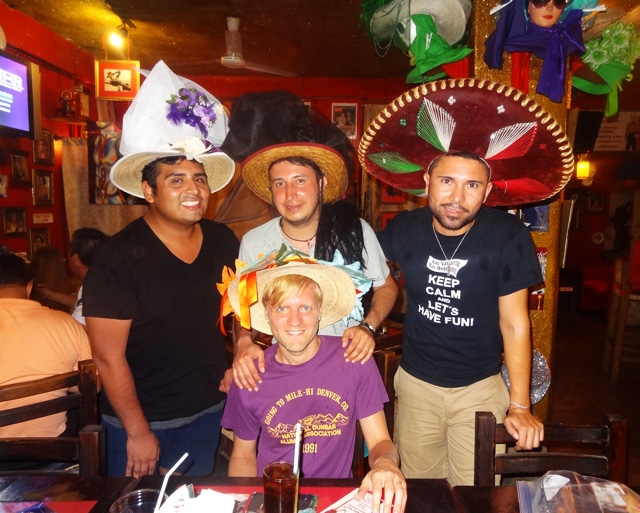 The tour takes the legwork out of finding places to go. You might be able to figure out on your own that Paco’s and CC Slaughters are worth visiting, but without the tour, you may miss other fun spots like Reinas, an awesomely divey red-walled neighborhood joint that provides hats and wigs to try on, and Act II, a classy piano bar.

As for specific gay bar recommendations, La Noche is great. It’s three floors, with drag shows and dancers on the first floor, and an outdoor rooftop on the top floor.

Industry is not necessarily designated as a gay bar, but given its location in the heart of Zona Romantica, it gets lots of gay customers. Industry has a dance floor and plays more hip hop than some of the other places. 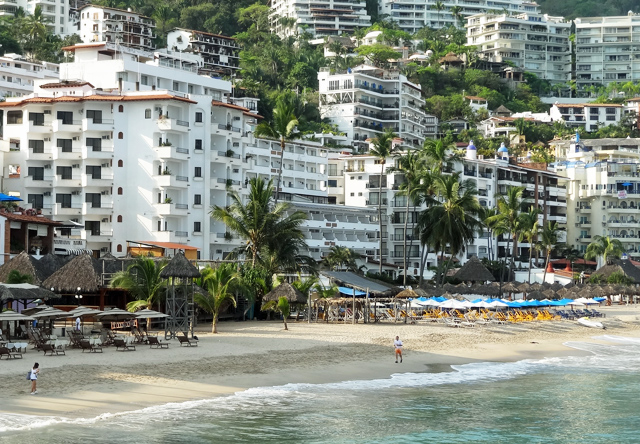 Puerto Vallarta’s beaches are spectacular, and there’s a popular gay beach section not far from Los Muertos Pier. To find the gay section, look for the blue chairs of the beachfront bar/restaurant called, um, Blue Chairs.

To confuse things a bit, not far from the blue chairs beach is another bunch of blue chairs belonging to the Mantamar Beach Club, another spot popular with the gay crowd.

On the other side are the green chairs of Ritmos Beach Café, which also has a sizable gay clientele since it scoops up the overflow from Blue Chairs. 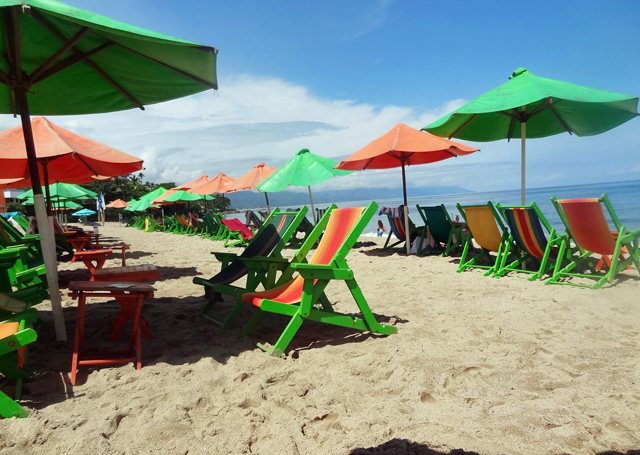 There isn’t an officially-designated gay beach in Vallarta, but the beaches by Blue Chairs, Mantamar, and Ritmos are where most of the LGBT crowd tends to hang out. That’s definitely the place to go if you want to hang out with (or just watch) other gay folks.

I spent an afternoon at the green chairs sipping cocktails and taking in the sights – the waves, the parasailers, the local vendors, the speedo-clad beach-goers. Good times!

The aforementioned Diana’s is one tour that LGBT visitors should definitely try to schedule. The all-day journey runs from October through July, drawing guests from around the world, plus a few locals. Update, winter 2022: Diana’s tour is still going strong and now costs about 2650 pesos, or $130 USD. It’s still a good value, and the tours still sell out. 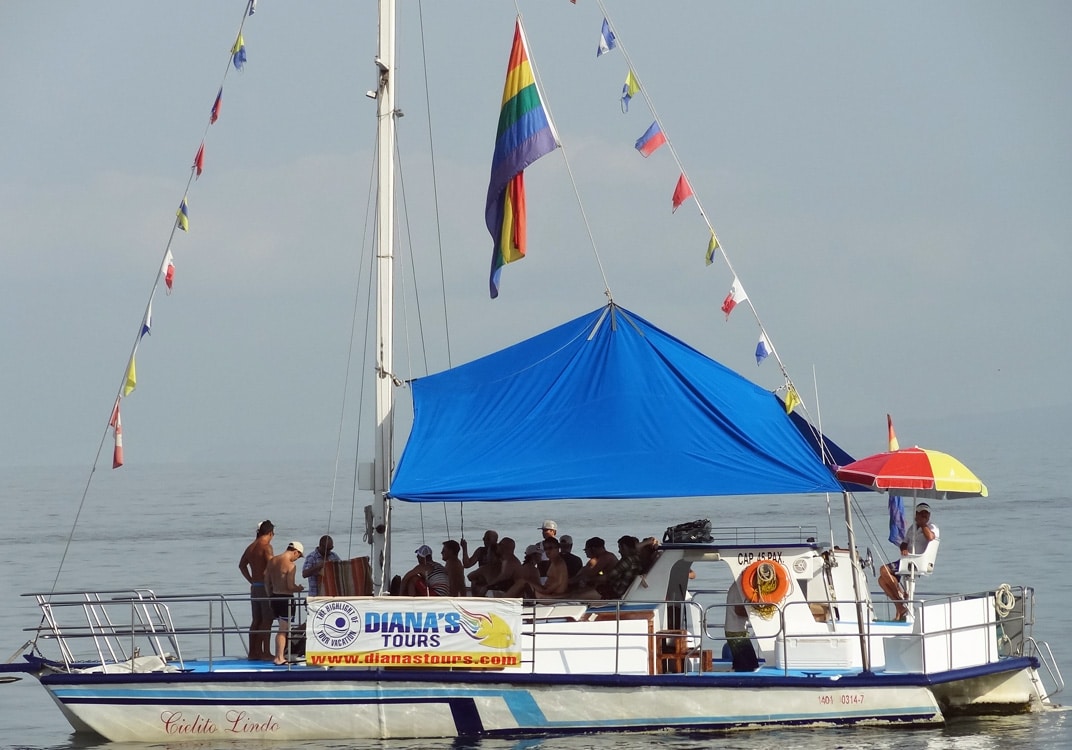 Diana has been operating the tours for 22 years, and they often sell out in advance, so don’t wait until the last minute to book. The cruise includes booze, appetizers, a stop at a private beach, lunch at a beachfront restaurant, and a snorkeling excursion at Los Arcos National Marine Park, a group of natural rock formations just off the coast.

Lots of tourists pay for separate snorkeling tours at Los Arcos; Diana’s guests get to have that experience as part of a much more exciting day. 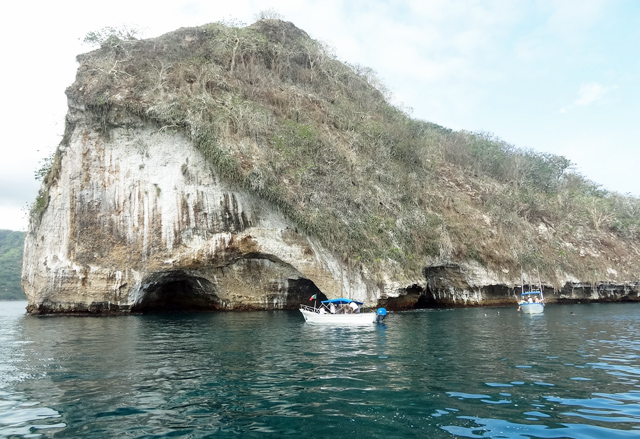 Food tours, horseback rides, sunset party cruises, and other gay tours and parties can be found in the city, especially around special events like Pride Week, which takes place in late May. Gay marriage is legal in the entire state of Jalisco, and even before it was legal, commitment ceremonies were held at Vallarta Pride.

I scored a sweet tank top from RX Supplement & Buen Flex clothing. Buen Flex manufactures its products locally, and the shirts are made from a very lightweight cotton ideal for the climate, as opposed to the heavier cotton tees normally seen in America. 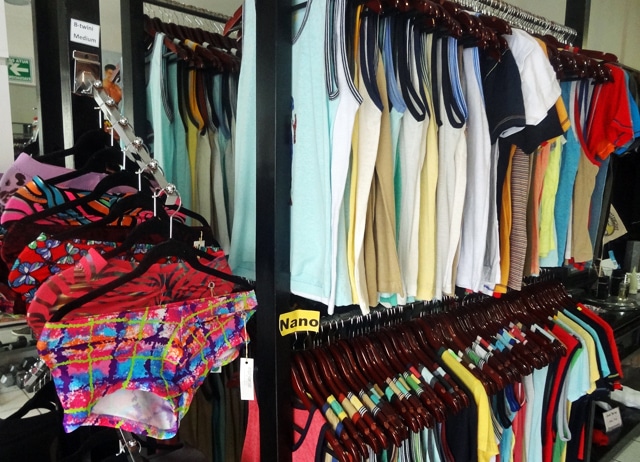 For the scoop on more local gay businesses, check out Gay PV Magazine, one of the best resources for LGBT Puerto Vallarta info.

Virtually all the resorts and spas in PV are gay-friendly, so travelers with some cash to drop may want to look into luxury experiences. (If that’s not you, stay tuned for an article next week on how to visit PV on a budget.)

Other luxury options in Puerto Vallarta include Casa Velas, an all-inclusive resort which has its own spa, pool, and beach. 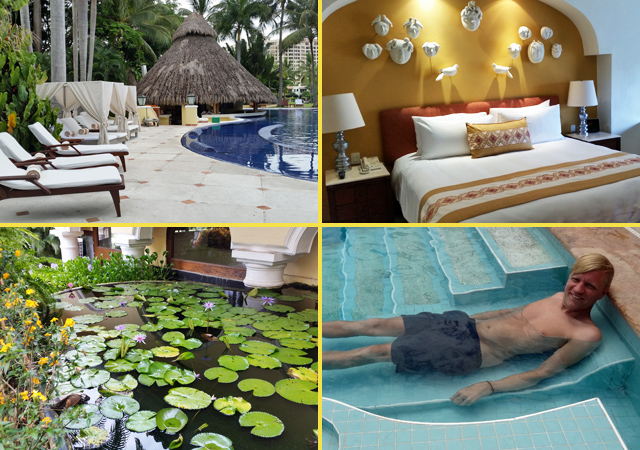 Tequila was born right here in the state of Jalisco in the 1500s, so tequila tastings are common throughout the PV area. I enjoyed a tasting at the Marriott, which makes its own Casa Magna brand. I couldn’t quite make out the subtle differences between the blanco, repasado, and anejo varities. I’ll just take a shot of any of those, thank you. 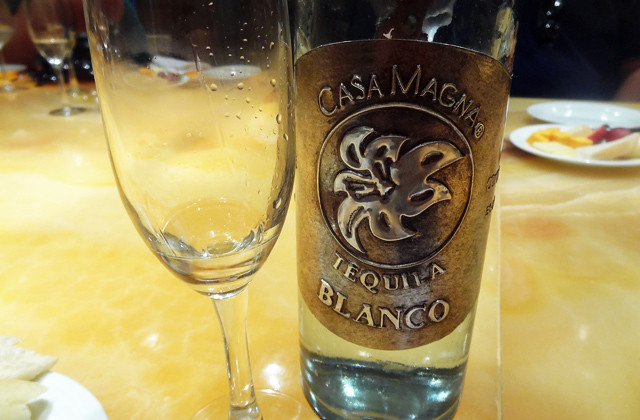 Even the ATV tour I took in the mountains had a tequila tasting at the end!

So when you’re on your big gay Puerto Vallarta vacation, don’t pass up any tequila opportunities that come your way. And remember, since it’s a local product, drinking tequila counts as a legitimate cultural experience.

And I didn’t even mention the fantastic restaurants! What are your favorite reasons to visit Puerto Vallarta? Here’s a collection of Puerto Vallarta photos.

BTW, I also recommend Zipolite and Mazunte as another gay-friendly Mexican beach destination. It has a hippie vibe and even a nude beach and hotel where a lot of LGBT travelers like to visit.

You may find yourself running out of cash while bar hopping, in which case you’ll need to know your options.

Credit cards. Many of the gay bars in Zona Romantica do not accept credit cards. One bar which does take credit cards is Industry, but there’s a 300 peso minimum.

US dollars. Many of the bars take US dollars for payment, since there are so many American tourists who visit PV. I was able to spend US dollars at Reinas one night when I was out of pesos. However, the exchange rate is usually not the best. So pay with pesos if you have them.

ATMs. Where can you find an ATM in Zona Romantica Puerto Vallarta? It gets a little tricky. There’s an ATM between Mr. Flamingo and La Cantina Margarita, but it actually dispenses US dollars rather than pesos. Boo!

If you need an ATM that dishes out pesos, your best bet is to go to Farmacia Guadalajara, which is a grocery store just across the street from Reinas. It’s open late at night and has an ATM inside. As a bonus, there are some food trucks nearby that remain popular for late-night bar hoppers.

Note: During my visit to Puerto Vallarta, I was a guest of the local tourism board, meaning that most of my expenses were covered. As always, all reviews and recommendations are my own honest opinions. 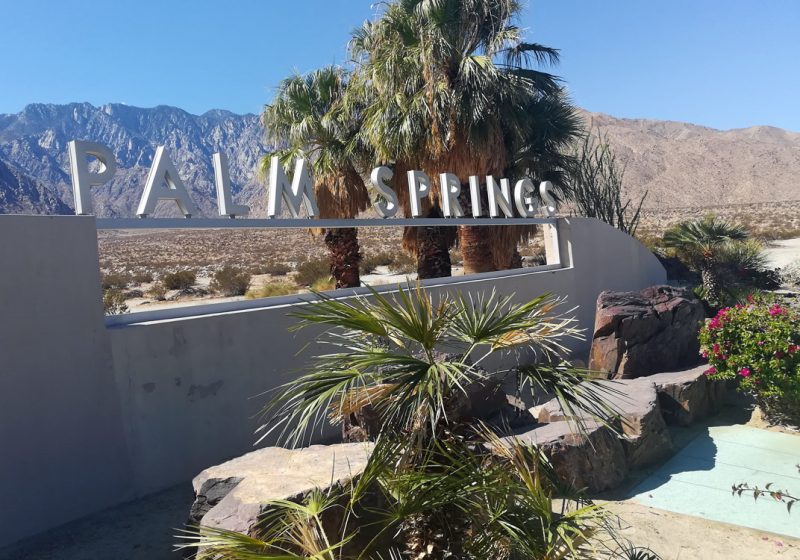