For the most part, visiting Cuba means leaving behind your Facebook friends and your Instagram feed. The island nation is one of the few places in the world where it takes significant effort to locate wifi and internet. But getting wifi in Cuba is totally doable.

Lots of people in Cuba have cell phones – they’re almost as ubiquitous as they are in the United States. But in most of the country, they’re pretty much used for calls and texts.

Mobile data isn’t really a thing in Cuba yet, so both locals and tourists have to make do with limited access to wifi. Generally speaking, if you visit Cuba, be prepared to take a trip back in time and experience life as it was back in the days before hand-held technological devices took over our lives.

That said, you can get wifi and internet in Cuba. It will just take a little bit of effort.

Where to find internet in Cuba

For a long time, the only place to get internet access in Cuba was at a couple of expensive Havana hotels. Now, however, the internet is available throughout the country.

During my first visit to Cuba in 2016, wifi was available in more than 50 locations in several major cities, including Havana, Viñales, Santiago, Pinar del Rio, and many others.

However, by late 2019, getting wifi in Cuba had become substantially easier, as more than 1000 locations had become internet-accessible. And by 2022 it was even more widespread. Here’s the current list from the Etecsa website.

Internet was not available at Havana’s Jose Marti Airport as of my visit. But that has also changed! Wifi is now available for travelers in Terminal 3 at the departures section of the airport. Sweet!

To get online, you’ll need to buy a one-hour internet card. In Viñales, you can buy these passes for $2 CUC ($2 USD) during business hours at the bright blue Etecsa building just off the main street near the central plaza. This is the only place in Viñales where you can find wifi. The signal reaches from Etecsa into the plaza. 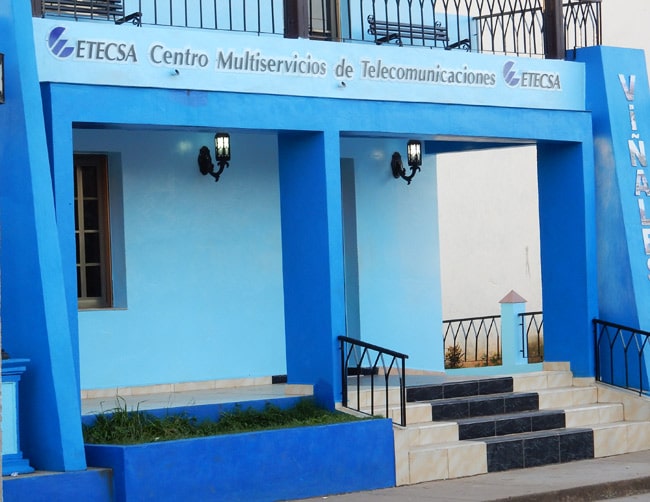 Each pass gives you a really long wifi password that provides 60 minutes of online access. You don’t have to use all 60 minutes at once. I typically logged on for a few minutes, checked my email and Facebook, then logged off again. The three one-hour passes I bought lasted me all week in Cuba. 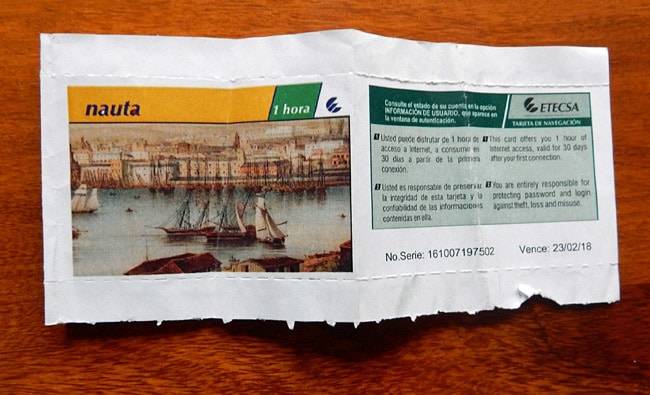 Most towns have only a few buildings that offer wifi signals. In Havana, where an hour internet pass is available for $3, one of the most common places to use wifi is on La Rampa (officially known as Avenida 23), an inclined street in the trendy Vedado neighborhood.

When you reach the Pabellón Cuba, a large indoor and outdoor pavilion that hosts Arte en la Rampa all summer long, you’ll know you’ve come to the right spot for wifi. You’ll see dozens of locals sitting on the steps and standing on the street outside the building on their cell phones, taking advantage of the rare internet opportunity.

Americans can sometimes actually use their own cell phones for limited internet access in Cuba. Verizon, AT&T and Sprint all have some coverage in Cuba, though roaming prices for calls, texts, and data are very high (like 50 cents a text and $2 per MB of data.) You should only plan to use your home cell coverage in Cuba in case of emergency.

Many people assume that under the Castro regime, internet access must be limited or certain websites must be censored. I saw no evidence of that. Granted, I only spent a few hours online, so I cannot say that every website is available there.

But out of curiosity, I did surf around to several different sites, and I had no problems accessing them. I was able to access the American version of cnn.com to read about the latest political news. Nothing was censored.

Facebook was easy to access – many locals were on Facebook as well – and I was even able to connect to a few dating apps. (Virtually no Cubans were on these apps, mind you, but you have the ability to use them if you wish.)

I found that locals were very well-informed on American news and politics, probably because of their internet connectivity. Cubans are not in the dark in any way about what’s going on around the world.

Disconnecting from the internet for a while is always a healthy exercise, and in Cuba you will mostly get to have that experience. But it’s nice to know that you can briefly connect to stay in touch with family and friends when you need to!

Now that you’ve read our article about wifi in Cuba, maybe you’d like to check out our suggestions for the best guided tours in and around Havana?