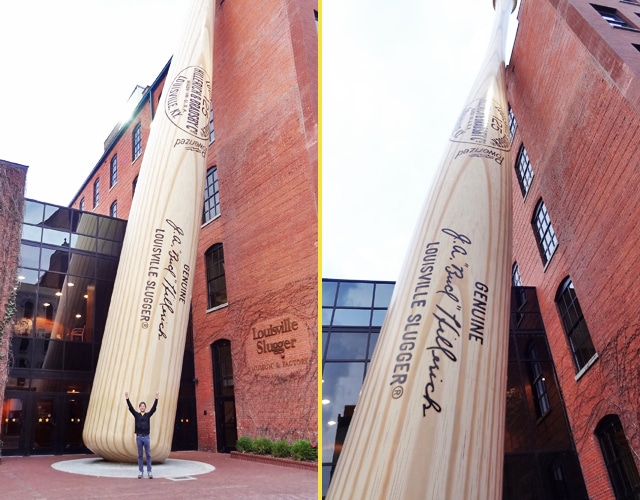 One is a baseball bat that stands 120 feet tall. The other is a scary vampire bat with sharp teeth. Here’s the scoop on both.

The World’s Largest Baseball Bat at the Louisville Slugger Museum

Made from carbon steel, the bat is an exact replica of the 34 inch wooden model (the “R43”) used by the great Babe Ruth back in the 1920s.

A famous story goes that Babe walked into this very factory in 1927 and requested that they make him some bats. That summer, Ruth swatted 60 home runs, breaking his own previous record of 59. Ruth’s single-season mark would stand for a whopping 34 years, until Roger Maris hit 61 in 1961.

The diameter at its largest point is nine feet.

There’s no doubt this is the biggest baseball bat in the world. In fact, Guinness World Records declared it exactly that.

A plate in front of the bat reveals all the important details.

While you’re here, you may want to stop inside the Louisville Slugger Museum to get a glimpse at some sports history and see how the famous baseball bats are made.

As of this writing, the museum is open seven days a week. Adult admission is currently $16, while seniors pay $15 and kids’ price is $9.

If you step inside, you’ll find another cool piece of art that the museum calls “the world’s largest baseball glove.” It’s a 17-ton sculpture of a glove, made from Kentucky limestone that’s 450 million years old. The glove sculpture lies on its side, meaning that visitors can sit on it like a bench, and kids can go inside.

The museum has some cool exhibits, like a signature wall and a collection of famous bats, including one used by Joe DiMaggio during his famed 56-game hit streak and another that Hank Aaron used when he hit his 700th home run. Visitors can even hold bats used during games by legends like Johnny Bench, Derek Jeter, and Mickey Mantle.

The Louisville Slugger company has a fascinating history, dating back to the 1890s. While working for his father’s woodworking shop, a teenager named Bud Hillerich became passionate about manufacturing baseball bats. Read more about the history here.

Two blocks over in downtown Louisville, you can find a giant vampire bat hanging on the side of a building next to Caufield’s novelty store. Less information is available about the origins of this particular bat, but given its location on the side of a novelty shop, we assume the bat was created in honor of the store.

Caufield’s sells costumes of all kinds (including Halloween outfits), plus magic and decorative items. So the steel and fiberglass bat fits right in.

Its sharp teeth and bright eyes make it a spooky replica of the real flying mammal. 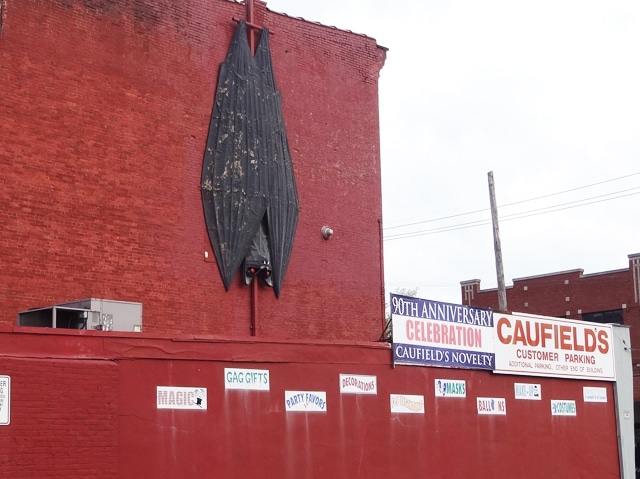 This bat is 24 feet tall and 16 feet wide. It has ominous red eyes, which seem to glow at night. The bat was created by Kerry Caufield, a member of the family business who first built a 3-foot model and then constructed the larger one based on it. 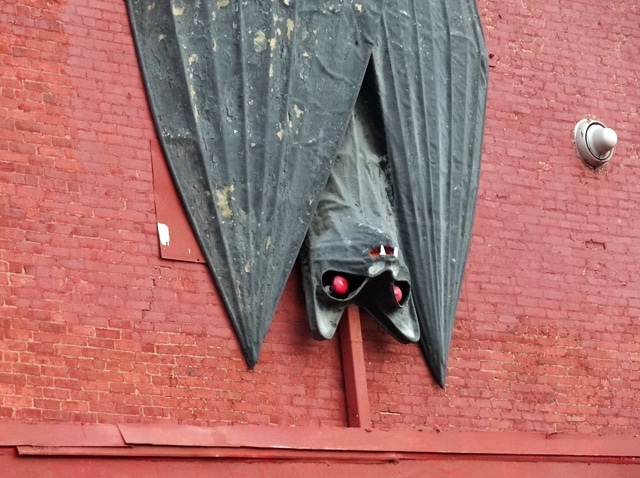 Totally creepy! Louisville is the only city that gives you the opportunity to see two giant bat replicas within walking distance!

While you’re in Kentucky, we also recommend visiting Churchill Downs, the Muhammad Ali Center, and the awesome and underrated Mammoth Cave National Park.