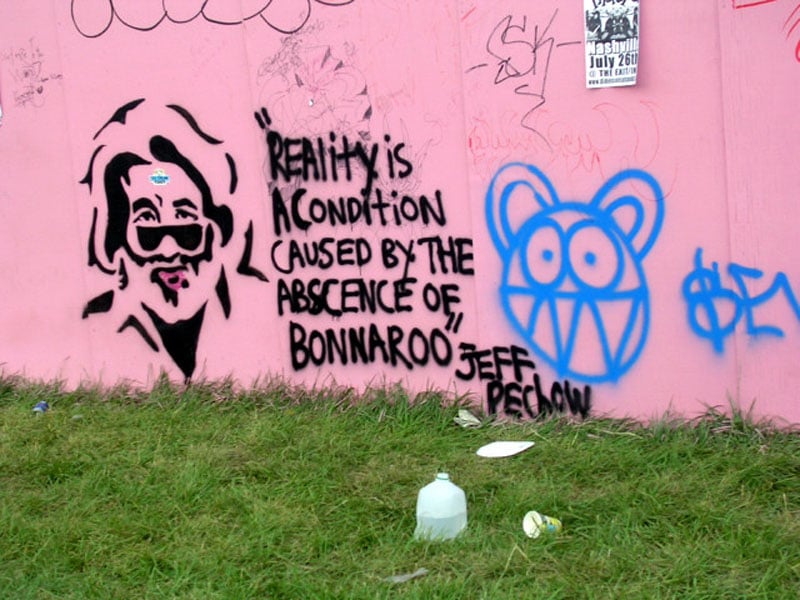 If there’s one major American music festival that seems to attract more travelers than any other, it’s Bonnaroo. Begun in 2002, the annual four-day event in mid-June in Manchester, Tennessee brings together upwards of 80,000 people who camp out over the long weekend to hear music from today’s biggest bands from all genres.

If you’re considering making a trip to the Bonnaroo festival for the first time, here’s the inside scoop on everything you can expect, from ticket prices to camping arrangements to the overall atmosphere.

Guide to Bonnaroo: The Music

We’ll start with the music, because that’s the main reason everyone goes. The 2023 Bonnaroo lineup hasn’t yet announced includes headliners or mid-card acts yet. That typically happens around January. All types of genres are represented, from jam bands to hip hop to electronic to country.

This is a pretty typical lineup. In the past few years, the fest has hosted acts such as the Red Hot Chili Peppers, U2, the Weeknd, Lorde, Machine Gun Kelly, Stevie Nicks, Tegan & Sara, Cold War Kids, Kacey Musgraves, The National, Cardi B, Phish, Post Malone, and Childish Gambino.

Because the festival is held on private grounds, there’s no curfew. Bonnaroo is famous for having shows start as late as 3 am, which can lead to an awesome party atmosphere, particularly when a dance/DJ act with a laser light show takes the stage.

In 2008, Kanye West infamously went on two hours late, starting at 4:30 in the morning. This pissed off thousands of people, but I’ll never forget daylight starting to peek through around 5:30 when Kanye was still on stage. Where else can you see a huge star perform as the sun rises? I count it as one of my favorite concert memories ever.

The flipside is that by around 8 am, the sun is beating down and it’s usually too hot to sleep inside your tent any longer. On top of that, there’s always some inconsiderate bastard who gets up at 8 and starts blasting music, waking up everybody within a half-mile. Bottom line: You’ll be awake by 8 every morning. Expect very little sleep over the weekend.

It’s for that reason that after 2008, I swore I would never attend Bonnaroo again unless I was traveling in an RV to block out the sun and the noise. I need my beauty sleep!

Unlike Lollapalooza, Bonnaroo has very few trees. When it gets hot during the day, you can’t even lie in the shade and take a quick nap, because shade is at a premium and it’s nearly impossible to find an available spot. This is definitely the biggest drawback with this festival – they’ve got to find a way to get more shade in there! 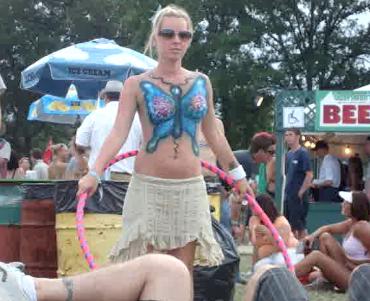 Before heading to Tennessee, check out this guide to camping and packing for music festivals to make sure you’re bringing everything you need. Get to Bonnaroo as early as possible. There are only a couple of two-lane roads into the site, so if you arrive late in the day on Thursday, expect to sit in traffic for at least an hour, maybe two.

Once you pull into your assigned parking spot, jump out immediately and claim your tent space. There’s limited ground available, so don’t delay, or you may find that your neighbors have gobbled up all the good real estate. 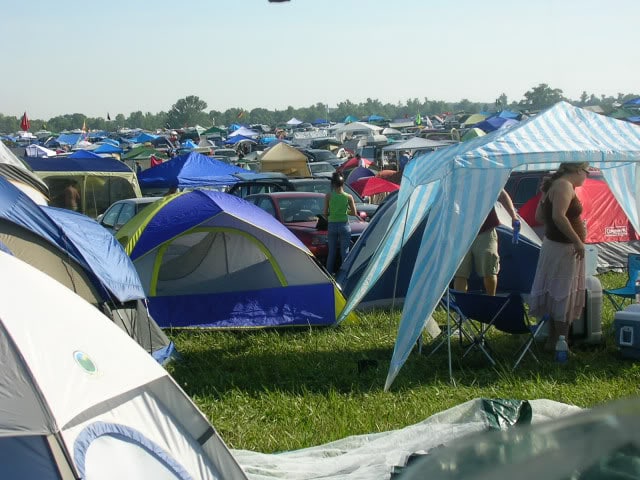 Many people arrive in RVs. If you plan to rent an RV, you’d be wise to rent one in your hometown and drive it to the site. Word is that the RV rental facilities in Tennessee and Alabama sell out around the time of the festival, so you don’t want to be left out.

Personal hygiene is often an issue. Where do people shower over this long weekend? Most don’t bother. There are a handful of pay shower booths available for those who want to clean up. When I attended, a shower cost $10 (and by Saturday I was more than willing to pay!)

A lot of people wash off in the fountains. Others bring baby wipes. If being around smelly people bothers you, this event is not for you. 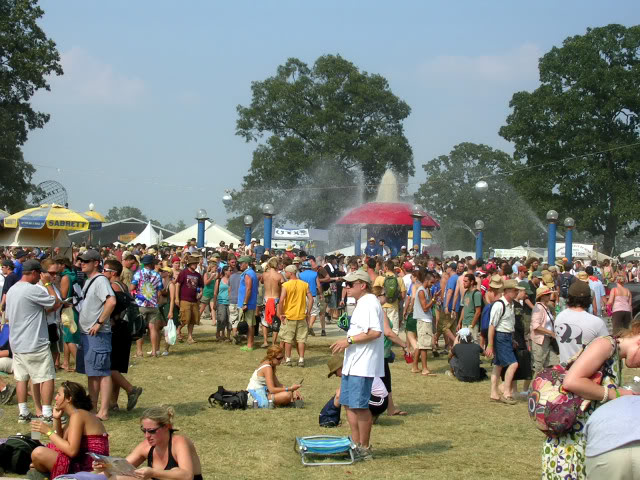 Guide to Bonnaroo: Food and Alcohol

If you’re on a budget, bring as much food as possible. You won’t be able to take any food or drink (aside from bottled water) into the concert area, but you can keep as much as you like in your car or tent, and you can always go back and forth from your car to the concert area, though the trek can take up to 20 minutes.

Food and alcohol inside Bonnaroo are expensive, as you might expect. There are plenty of options, including numerous vegetarian choices.

Since booze isn’t allowed inside the gates, I actually had one friend take a big mouthful of vodka, hold it in his mouth as he passed through security, then spit it back inside an empty water bottle once inside. That’s dedication!

More than the other big-time music festivals (Lollapalooza, Coachella), Bonnaroo cultivates a welcoming, friendly vibe. This is primarily due to the event’s history – it began as a jam band fest where bands like My Morning Jacket and the Dead played for thousands of hippies. 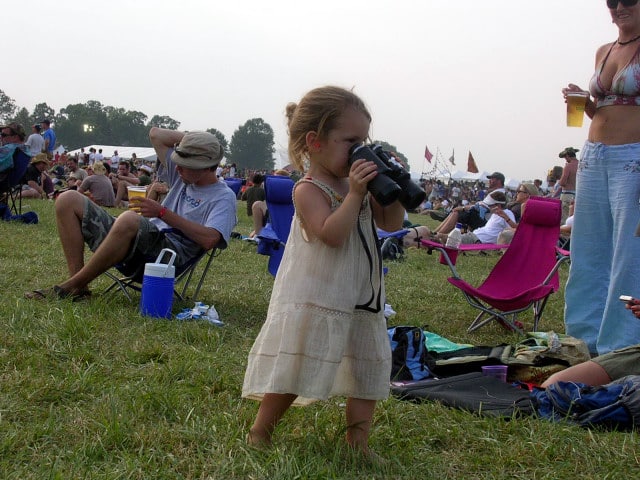 Over the years, Bonnaroo has become more commercial and mainstream, to the point that rappers like Eminem and Lil Wayne have appeared on the lineup. But there are still plenty of jam bands on the schedule. And the camping helps. You get to know your camping neighbors, and there’s a strong live-and-let-live attitude that permeates the event.

That includes plenty of drug use. Pot is easy to find and some vendors even sell bongs and bowls. It’s not officially allowed by the organizers, but if you’re discreet, there’s little chance you’ll get in trouble.

Bonnaroo makes a concerted effort to be green. You’ll find tons of recycling bins, not to mention exhibits that provide information and resources on how to live a more environmentally-friendly lifestyle. 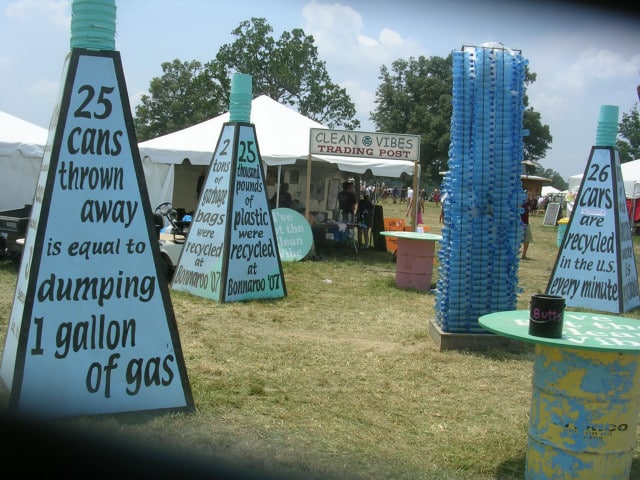 Tickets for Bonnaroo uses to run in the $225 range, but these days they’re closer to $325. They can cost slightly less or more, depending on when you purchase them.

Of course they have much more expensive VIP plans as well, which start at $825. You’ll probably see between 30-50 bands over the four days, so that basic ticket price is actually an incredible bargain.

For other info like directions, pics, and a map of the festival grounds, check out the Bonnaroo official site. If you’re attending, take lots of water and have fun!

10 thoughts on “Your Guide to the Bonnaroo Music Festival”