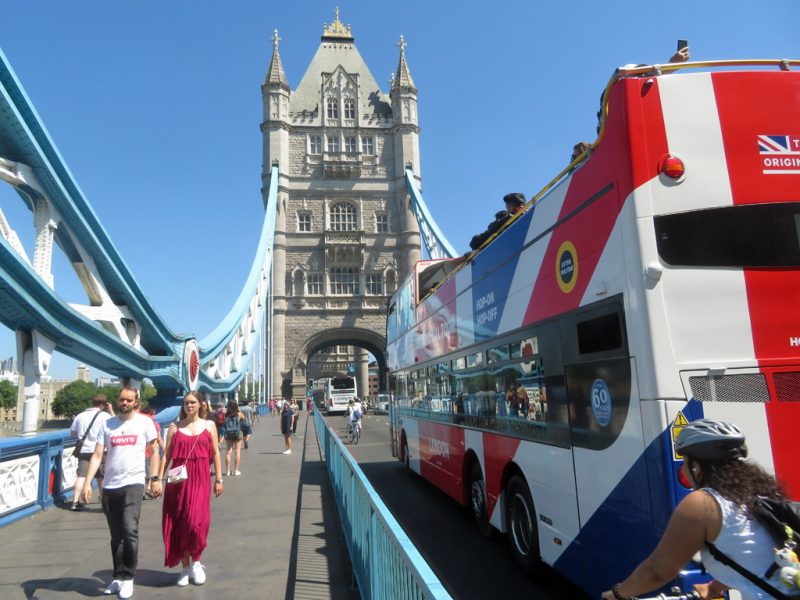 London, England. One of the most historic cities in the world! And you can see the entire city during a short two-hour layover!

Of course I’m kidding. There’s wayyy too much awesomeness in London to see it all in such a short time. But, if you’re motivated, you can actually see quite a bit during a 5- to 8-hour layover in London at Heathrow or Gatwick Airport.

On my way home from my epic African safari, I made sure to include a layover in London so I could visit the city. I only had a couple hours, but I managed to see many of the city’s most famous and historic spots. 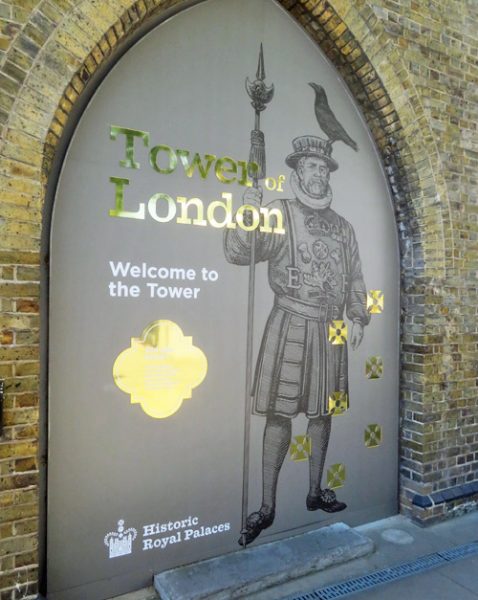 This guide will tell you how you can best see London if you have a 5, 6, 7, or 8 hour layover (which actually becomes a 1, 2, 3, or 4 hour layover once you account for travel time to and from the airport.)

The guide presumes you’ve never been to London before, and you really want to see the most famous attractions, like Big Ben and the London Bridge. If you’d rather see obscure stuff like the Fashion and Textile Museum, well hey, knock yourself out. But you’ll have to plan it yourself!

Before leaving home, make sure you’ve adequately prepared for international travel. And once you arrive in London, here’s how you can best maximize your time. Read on for our tips and advice for dealing with a short layover in London!

Lodging at Heathrow and Gatwick Airports in London

While this post is primarily intended for those with a short layover of 5-8 hours, I wanted to include quick note about the hotels in each airport for those who have a longer layover and need overnight lodging, or those who want to use their layover time to catch up on rest.

Here are some options for a London layover tour if you have a few hours. Note that all of these tours start from central London, so you’ll have to take the subway or a private shuttle into town. You can book a shuttle from Heathrow to central London.


London layovers: Do you have enough time to return to the airport?

The first thing you have to do when planning any London layover excursion is subtract 4 hours from your layover time. That’s because you’ll need 30-60 minutes to get through immigration and walk through the airport.

Don’t rely on Uber or taxis – because of traffic, driving can actually take longer than the train. I know friends of friends who’ve missed their flights home from London because they misjudged how much time they’d need to get back to the airport.

PRO TIP: There is luggage storage at both airports if you need it. No one wants to be dragging a huge suitcase around the city, and you won’t be able to take it inside many attractions anyway. Here are the links for Heathrow luggage storage and Gatwick luggage storage.

Here’s the quick overview of what you can do during such a short layover:
1. Tower of London
2. Tower Bridge
3. London Bridge

As noted earlier, you’ll need to subtract 4 hours from your layover time to account for travel to and from the airport.

So if you arrive in London at noon and your flight departs at 5 pm, that five hour layover in London will actually give you just 1 hour in the city center. Is it worth it to go into town if you have so little time to explore?

That’s a tough call. Most people would err on the safe side and say no. The answer depends on how badly you want to see London, and whether you think you’ll ever be able to return to the city.

If this is likely your only chance to see London, and you have an adventurous spirit, then go for it! Just remember that you’ll have to be fast and efficient. Don’t get sloppy and linger too long in town!

When you emerge from the subway, you’ll be very near the River Thames and you’ll be able to see the Tower of London – the historic castle built in 1078 – and Tower Bridge, the iconic Victorian turreted bridge. 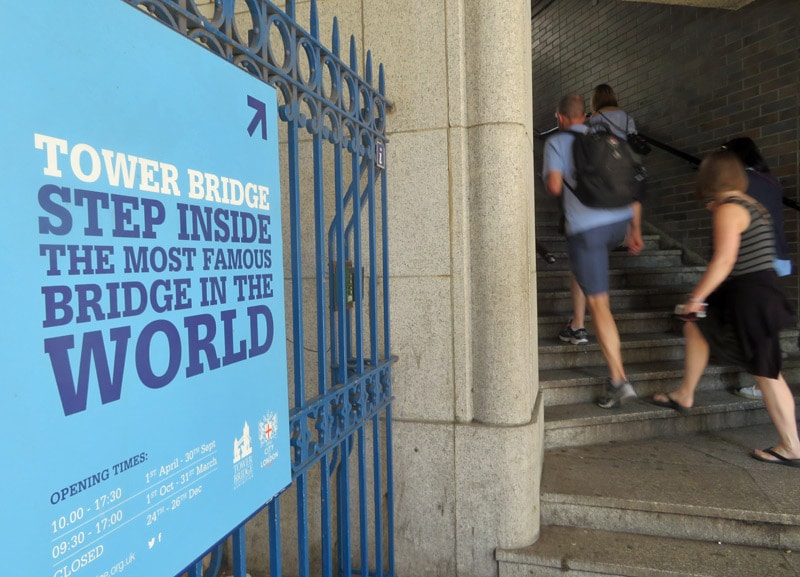 Tourists can buy tickets to go up 138 feet (42 meters) onto Tower Bridge’s glass walkway. They can also buy tickets to tour the inside of the Tower of London. But you probably won’t have time to do either of these tours on such a short layover.

I’d advise just walking across the bridge and walking around the outside of the tower. Marvel at their immensity and take lots of selfies.

You’ll have time to stroll on the sidewalk along the river over to London Bridge. From there, cross London Bridge, find the Monument subway station, and head straight back to Heathrow. 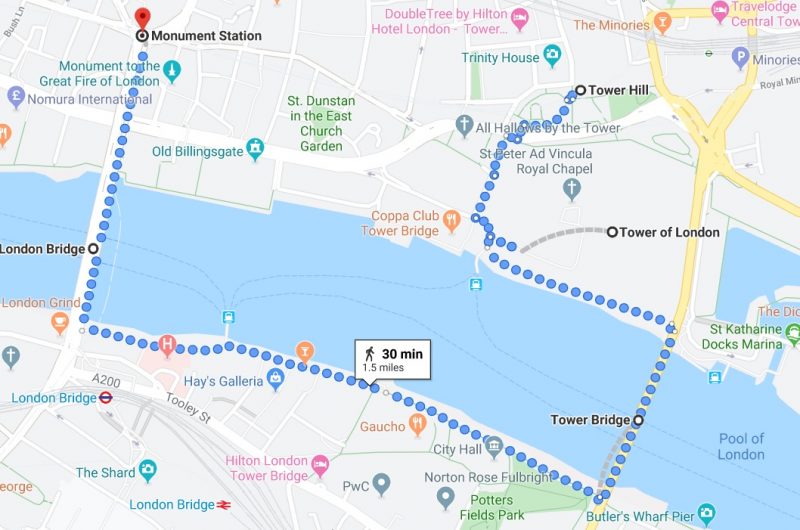 This itinerary includes 30 minutes of walking. That leaves you extra 30 minutes to stop for photos, do some people watching, or grab a quick fish & chips meal from the stand outside the Tower of London.

This will be a super-quick visit, but hey, at least you get to see some of the city’s most famous attractions, and you get to walk along the Thames among the people of London for a few minutes. Cool! 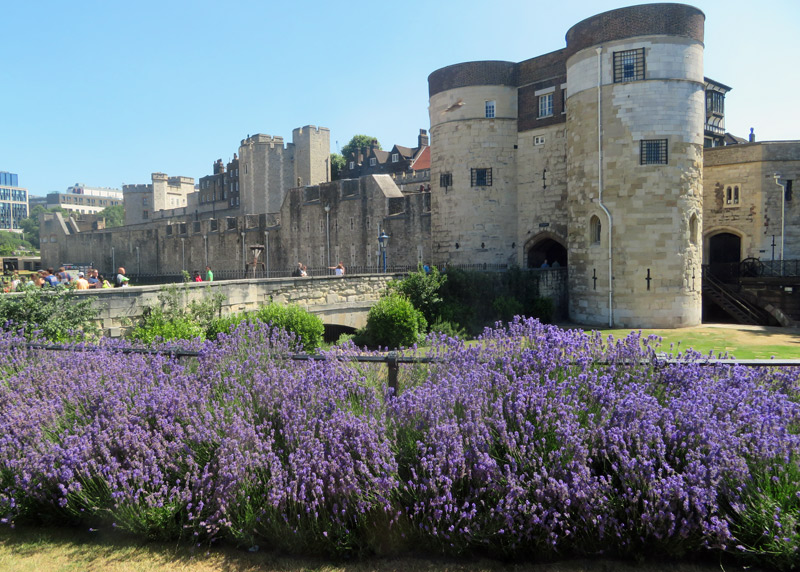 Here’s the quick overview of what you can do during a 6 hour layover:
1. Tower of London
2. Tower Bridge
3. London Bridge
4. Big Ben
5. Westminster Abbey
6. Buckingham Palace

Is a 6 hour layover in London enough time to see the city? Heck yes it is! This time frame will give you two hours in the city center. There’s plenty you can accomplish during this short layover.

That’s enough time to do the full 5 hour itinerary listed above, plus add in a couple more big stops. You can use that extra hour to buy a ticket to explore the inside of the Tower of London, or the glass walkway of Tower Bridge.


Or, after exploring the Tower Bridge area, hop back on the Underground and travel to the St. James’s Park station. After a 20-minute ride, you’ll emerge within walking distance of the 160-year-old clock known as Big Ben, the historic church Westminster Abbey, and the home of the Royal Family, Buckingham Palace. Take a quick walk around to see all three, and get yourself back on the subway to return to the airport. 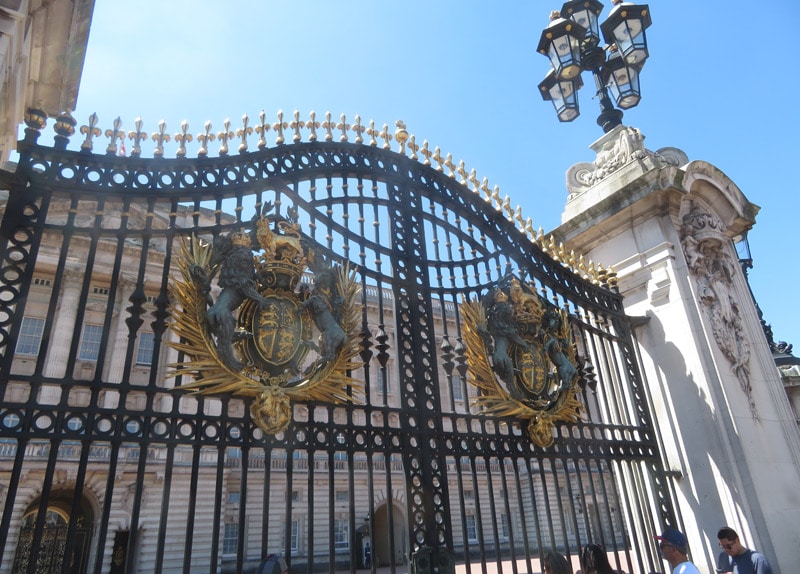 If you’re wondering what to do in London for a day, here’s a great itinerary. My own layover in London was roughly seven hours, giving me about 3 hours to explore. During that time, I was able to do almost everything listed above, except #4 and #11. You’ll have to move quickly and efficiently in order to squeeze everything in.

To make this plan work, follow the full 6 hour itinerary as described in the earlier section, then add on a stop at the giant ferris wheel known as London Eye. It’s across the bridge from Big Ben. Buy an advance ticket and pay a bit extra for the Fast Track Ticket since you’ll be short on time.


Zip through Trafalgar Square on your way there. This historic public spot is within walking distance of Big Ben and Westminster Abbey. Grab fish and chips from a vendor while you walk around the area.

Make sure to save some time for a stroll through world-famous Hyde Park. Here you’ll find the Princess Diana Memorial Fountain and Kensington Gardens as well.

Music lovers with an 8 hour layover in London may also want to stop by for a tour of Royal Albert Hall, which is near Hyde Park. It’s a revered venue that has stood since 1871 and hosted most every major music performer in history.

Here are some additional London layover tours that you might be able to fit into an 8 hour layover in London. Obviously, you can’t do all of these – you’d have to pick out the one that is most appealing.

Best way to get from Heathrow to London: Cab, train and rideshare options

For those with a layover in Heathrow, you have a few options for getting into the London city center. What’s the best way to get from Heathrow to London? Here are your three options.

Heathrow Express. The quickest way into London from Heathrow is via the Heathrow Express. This express train takes just 15 minutes! It drops you off at Paddington station, which is slightly away from the main tourist attractions. From there, you can walk to Hyde Park and Kensington Palace. Or hop on the subway and go elsewhere.

Purchased upon arrival, a Heathrow Express ticket costs 25 Euros each way during peak hours, which is quite expensive! But if you book online in advance, it’s just 5.5 Euros each way. That’s a much better deal! Trains run every 15 minutes from roughly 5 am to midnight.

London Underground (Tube / Subway). The more affordable option to get into the city is via the subway, also known as the London Underground or the Tube. Follow the signs at Heathrow to get to the Underground, and purchase your ticket or Oyster card right at the airport. The Underground costs between 3-6 Euros each way, depending on how far you’re going and whether you make payment using cash or the Oyster card. 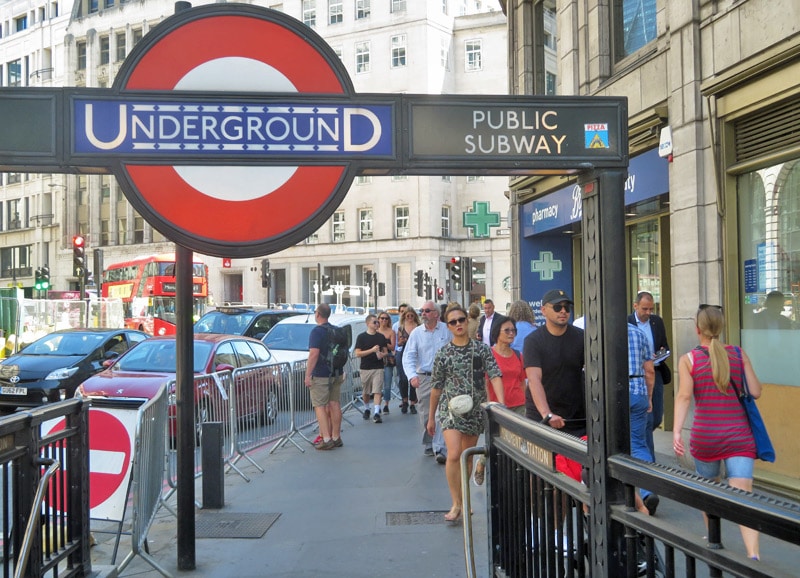 Via the Tube, give yourself 60-75 minutes to get into the heart of London. The benefit of using the Underground is that you have many more options in terms of where you’d like to get off and explore. Pretty much any neighborhood you want to see can be accessed via the Underground.

The train line you’ll take from Heathrow (the Piccadilly line) is part of the “Night Tube,” which means it runs all night on weekends.

Taxi or Uber. As we mentioned, taxis and Uber are not great options due to London traffic. You’d be looking at an hour or more for the drive, and that would be quite expensive (50 Euros at the absolute minimum – and probably quite a bit more.) There have been times during heavy traffic jams when the drive has taken two hours! You’re better off taking the train.

Best way to get from Gatwick to London: Cab, train and rideshare options

Chances are your layover will be in Heathrow Airport, as many London layovers are. But you could also be flying into London Gatwick Airport. If that’s the case, you have four options:

Gatwick Express. The quickest way into London from Gatwick is via the Gatwick Express. This express train takes just 15 minutes! It drops you off at Victoria station in London. That’s near Buckingham Palace and Westminster Abbey.

A Gatwick Express ticket costs roughly 20 Euros each way, with only slight discounts for booking in advance online or using an Oyster card. Trains run every 10-20 minutes from roughly 6 am to 11 pm. 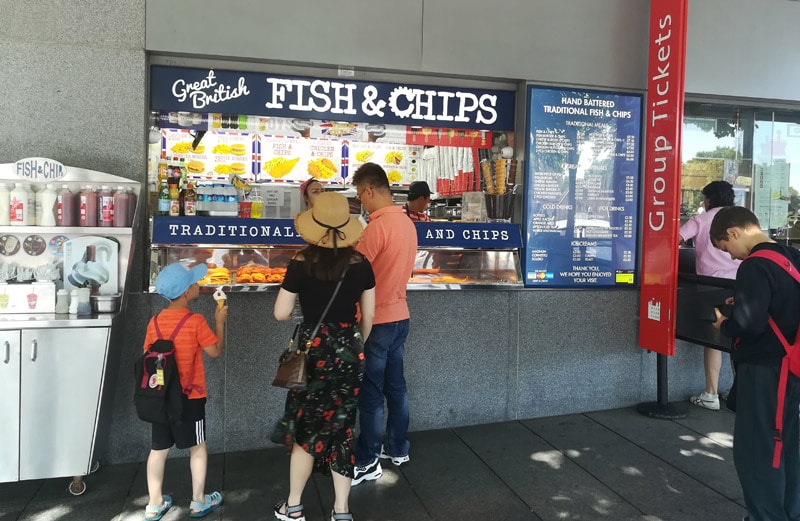 Taxi or Uber. As noted earlier, taxis and Uber are not great options due to London traffic. You’d be looking at 75 minutes to two hours for the drive, and that would be quite expensive (50 Euros at the absolute minimum – and probably quite a bit more.) Stick with the train instead.

That’s my recommended plan for London visitors with a 5 to 8 hour layover. Do you have any additional suggestions for London layover tours or other activities during a short London layover?

2 thoughts on “How to Spend a 5 to 8 Hour Layover in London: Layover Tour and Activity Suggestions”