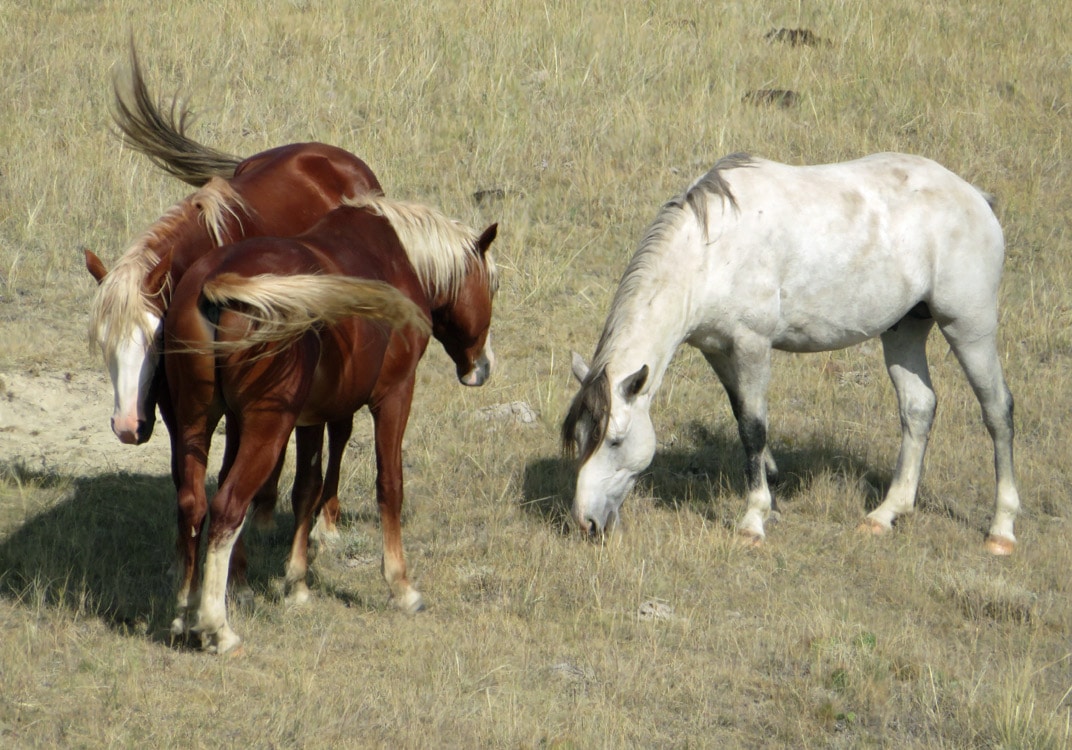 I inch closer to the top of the ridge, cautiously popping my head up to see if the horses are still there. Sure enough, I see them: Three horses, waving their tails and wandering aimlessly around the grassy hillside.

I had seen these horses from a distance while hiking near the Badlands Spur Trail, and I decided to see if I could stealthily approach them, behind the cover of a hillside. The plan worked perfectly!

Now I sit quietly and observe the horses from 50 feet away. Two of them have beautiful brown coats with light manes, while the other is a brilliant white with a gray mane.

I watch for a minute or two before the white horse notices me and stares in my direction. That’s my cue to move along, so I return back down the hill.

The Theodore Roosevelt National Park wild horses are among the biggest attractions for tourists in this famed North Dakota park. Determined visitors can usually track down a few horses near Scenic Loop Drive in the park’s South Unit.

This park actually has a ton of unique wildlife. Theodore Roosevelt National Park animals include lots of bison, huge prairie dog towns, and plenty of turkeys, rattlesnakes, and deer. I saw them all during my recent visit! 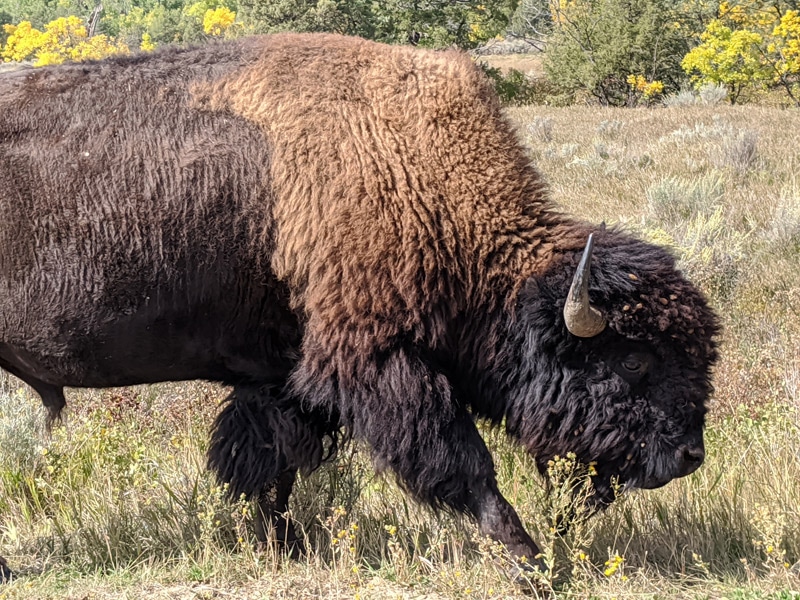 Roosevelt is split into three separate units: The North Unit, the South Unit, and the much smaller Elkhorn Ranch Unit. The North and South Units both have tons of wildlife, with the latter offering the chance to see horses.

If you’re interested in checking out the animals of Roosevelt National Park, read on for some tips on where to see them! We’ll start with the feral horses, which are among North Dakota’s most popular tourist sights.

A brief history lesson: Horses existed in North America until they went extinct between 11,000 and 13,000 years ago. They were re-introduced to the continent by Spanish explorers in the 1500s. Use of horses became widespread among explorers and Native Americans, and the horse population grew. 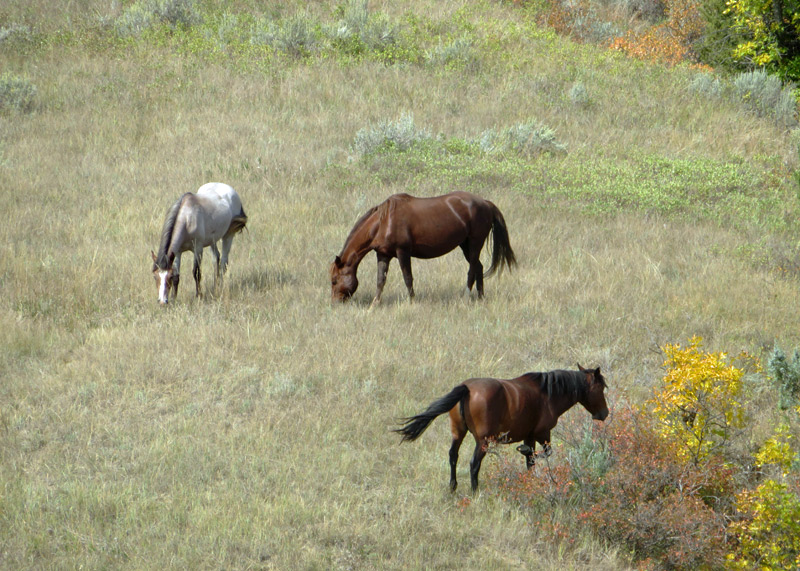 President Theodore Roosevelt visited this part of North Dakota more than a century ago during the “open-range era,” when ranchers allowed their horses to roam freely on the plains, rounding them up when they needed them.

In 1954, the park was fenced, and rangers rounded up all the horses they could. They removed around 200 horses from the park, but a few groups of horses (bands) eluded capture. Those bands have continued to prosper over the decades as they live freely in the park.

READ NEXT
Joshua Tree Day Trip: How to Spend One Day in the National Park

They are very skittish and will not allow humans to get close. They can usually see or smell humans coming.

Where to See Wild Horses in the Park 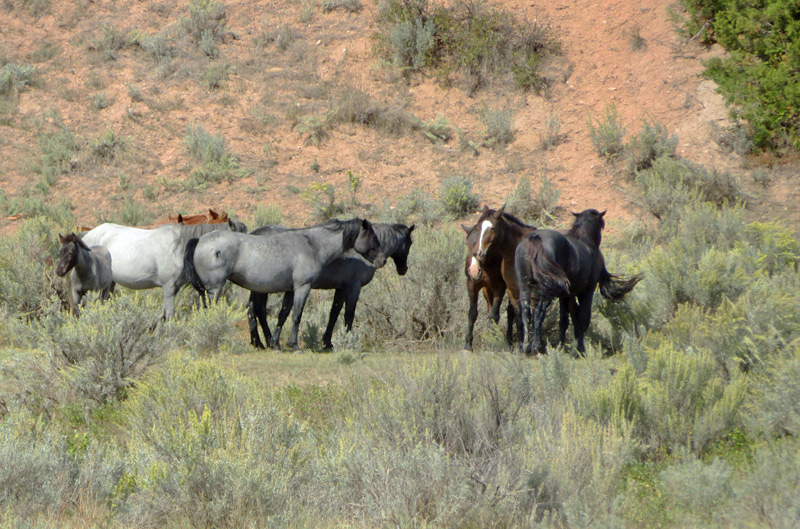 There are never any guarantees when it comes to seeing wildlife in a national park. They can wander wherever they like! The wild horses only live in the South Unit. I will point out the three spots I saw them.

While driving Scenic Loop Drive, I first spotted several horses way off in the distance. This was just south of the Boicourt Overlook area. I noticed several people looking to the hills in the northeast, and saw a couple bands of wild horses. 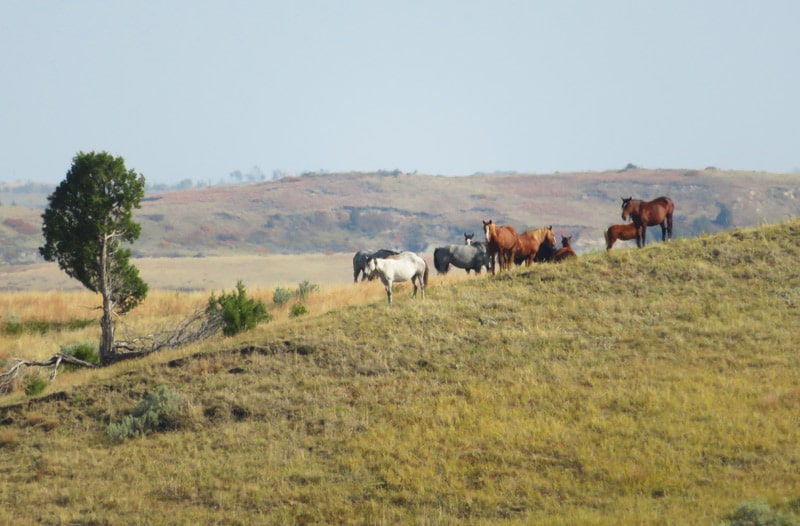 The second band of horses I saw was just off the main road. A few cars had pulled over, and I noticed that around a dozen horses were hanging out in the shrubs.

Here’s a map of Scenic Loop Drive. The blue dots indicate the locations where I saw the Theodore Roosevelt National Park wild horses. One group was right by the road, another was way off in the distance, and the third group was the trio I saw on foot while hiking the Badlands Spur Trail. 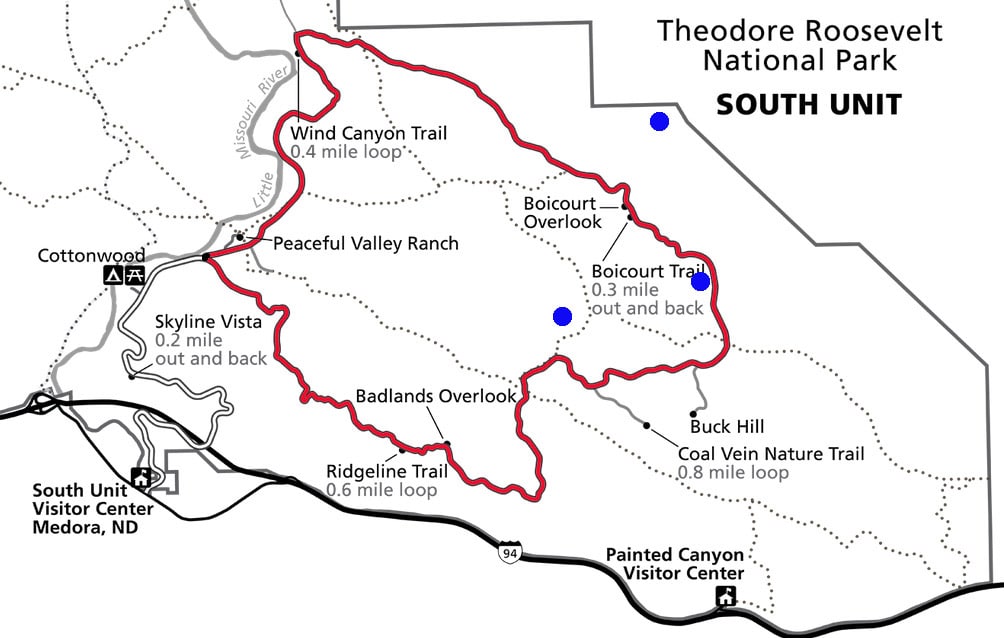 A map with blue dots showing where I saw wild horses in Roosevelt NP.

The key to spotting horses, bison, or any other wildlife, is to look for stopped cars. If you see multiple vehicles pulled over anywhere, chances are they’re all staring at some animal in the distance.

Where Can You See Bison in the Park? 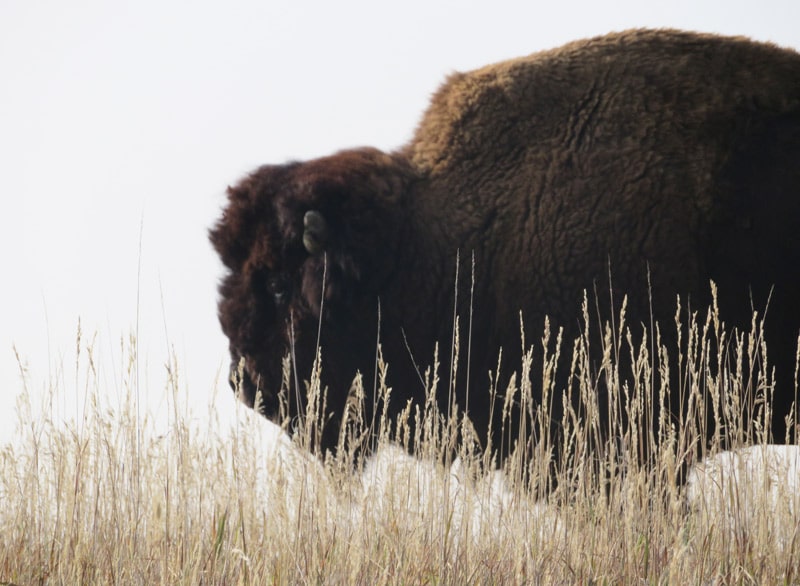 The American bison, or buffalo, is impossible to miss in the park. You will definitely see them if you drive the full Scenic Loop Drive in the South Unit and Scenic Drive in the North Unit. Look for them right next to the road, and sometimes even on the road.

If you run into a situation where bison are blocking the road, just wait it out. Ticked-off bison can cause damage to vehicles, so stay patient. I had to sit for a minute while these fellas took their good old time crossing the pavement. 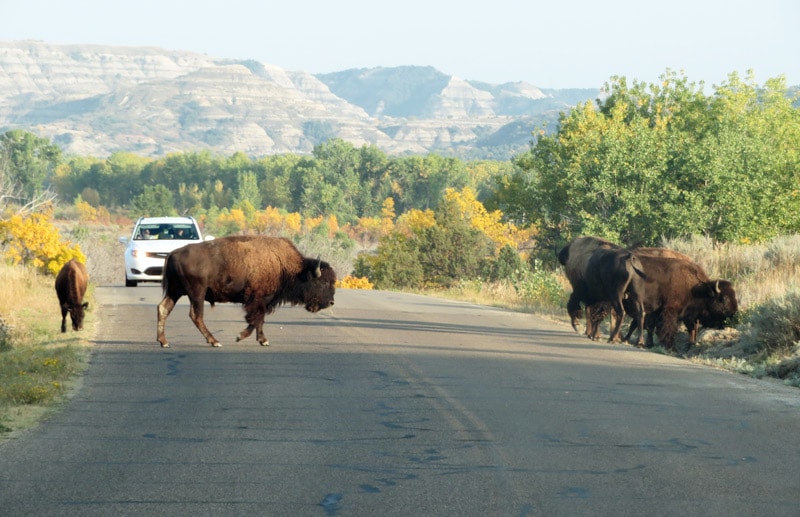 You may see bison right at the South Unit Visitor Center in Medora. I saw a few at Skyline Vista, one of the very first overlooks in the park. They look so cool with the mountains towering behind them!

The North Unit had plenty of bison, especially in the last few miles on the way to Oxbow Overlook. The park maintains bison populations at 100-300 total animals in the North, and 200-400 in the South.

Beware of Rattlesnakes While Hiking 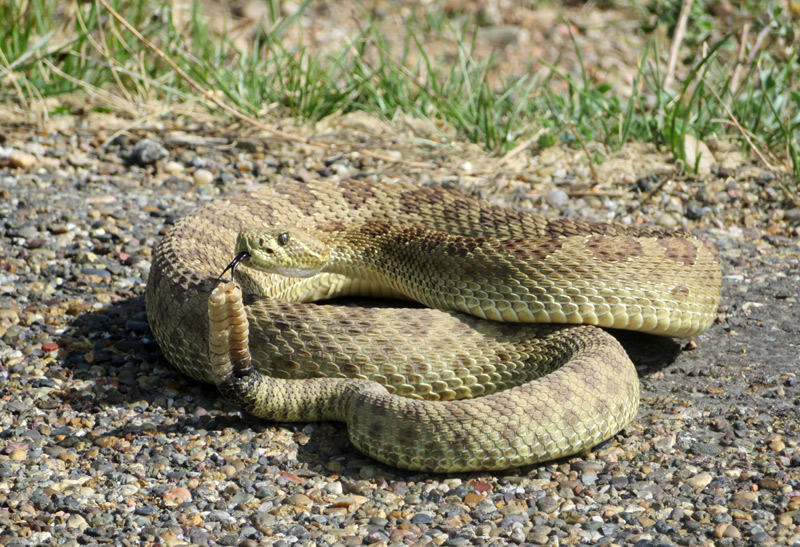 I had never seen a rattlesnake in my life before visiting Roosevelt NP, and on my first day there, I saw three! The first was right on Scenic Loop Drive in the South Unit, so I viewed it from the safety of my car. It was curled up in a defensive position as people stopped to take pictures while they drove past.

The other two snakes were both in the North Unit. I hiked one mile each way on the Buckhorn Trail from Caprock Coulee Trailhead to the prairie dog town. Along the way, I saw a large rattlesnake slithering on one of the dirt mound formations. I was fascinated and watched from about 20 feet away for a minute or so before it slithered into the shrubs. 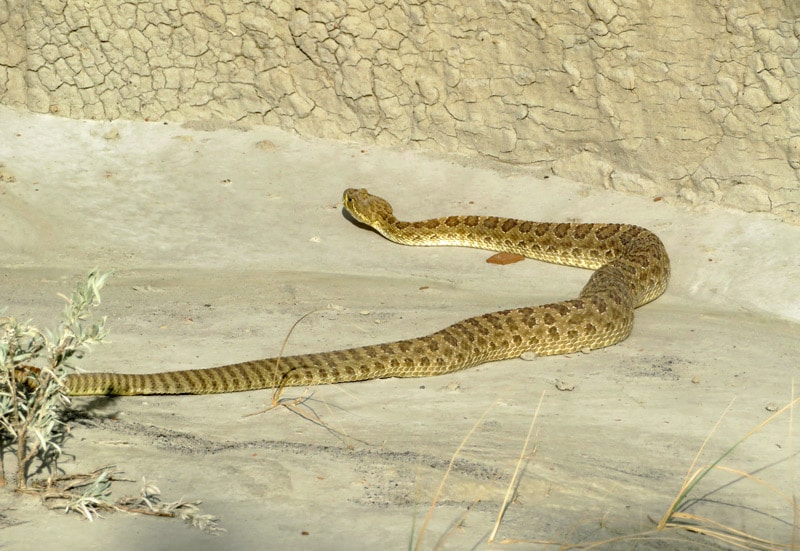 Minutes later, I saw another smaller rattlesnake right on the dusty trail itself. I would’ve stepped right on it if I hadn’t been warned by another hiker.

Importantly, I did not hear a rattle noise from any of these snakes. So keep your eyes open while you’re hiking! Snakes can be anywhere! 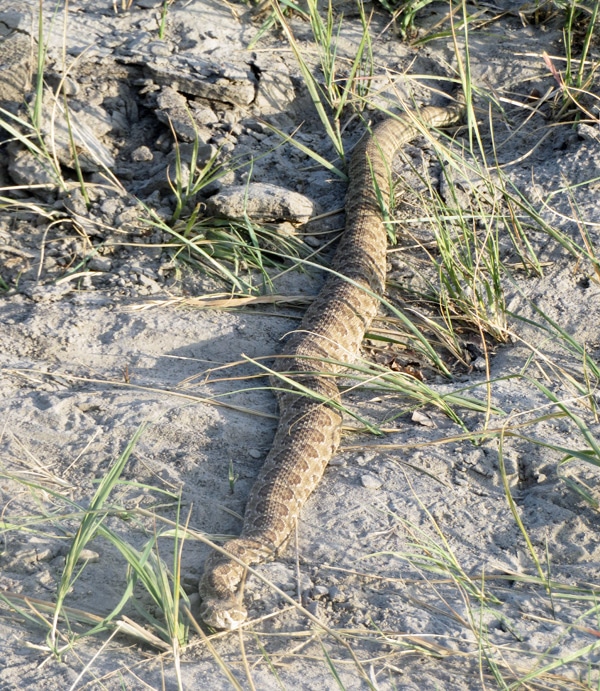 Like Badlands National Park, Roosevelt is known for its prairie dogs, which live in towns of hundreds of animals. Some of these towns are located right on hiking trails. Others are right next to the road! 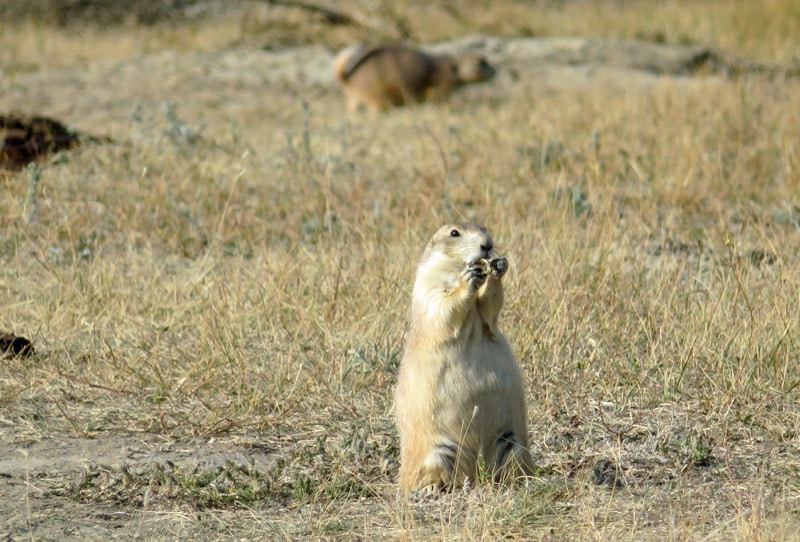 There’s a pullout next to a prairie dog town on Scenic Loop Drive in the South Unit. You can step out of your car and scan the horizon to count up hundreds of little holes and critters scurrying around.

If you get too close, one prairie dog starts shrieking a warning, and the rest of the animals head into their burrows. So get your photos from a distance. 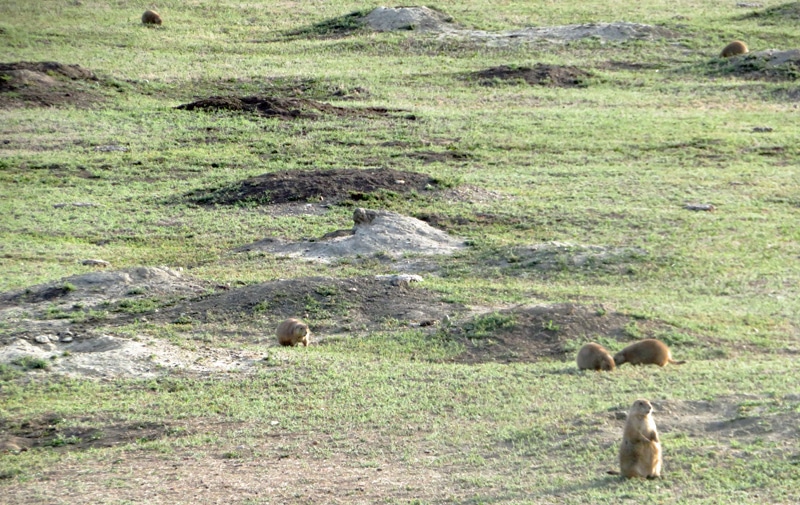 I did notice something interesting when I hiked to the prairie dog town on Buckhorn Trail. The prairie dogs there were less frightened of humans – probably because they see far fewer of them than the ones who live right next to the road.

So I was able to get within 20 feet of several prairie dogs, and they just went about their business. I sat down there and ate a snack while observing them.

READ NEXT
My 39 Most Amazing Wildlife Encounters in Africa 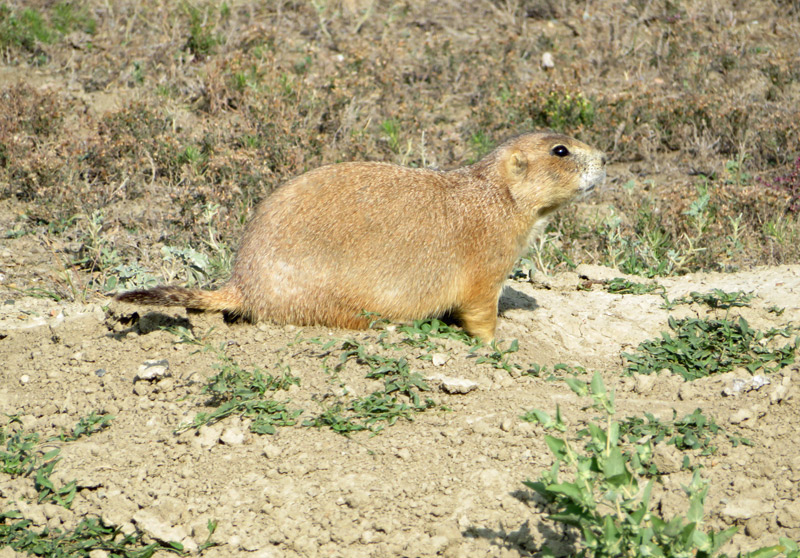 Wild turkeys are found throughout the park, and I saw them in two places in the South Unit. One group was just north of Skyline Vista, in some short trees near the road.

I later saw another group of around 10 turkeys while hiking toward the river at Peaceful Valley Ranch. Just as I reached the riverbank, I noticed a few running around a grassy area, and a few others perched in some small trees a few feet off the ground. 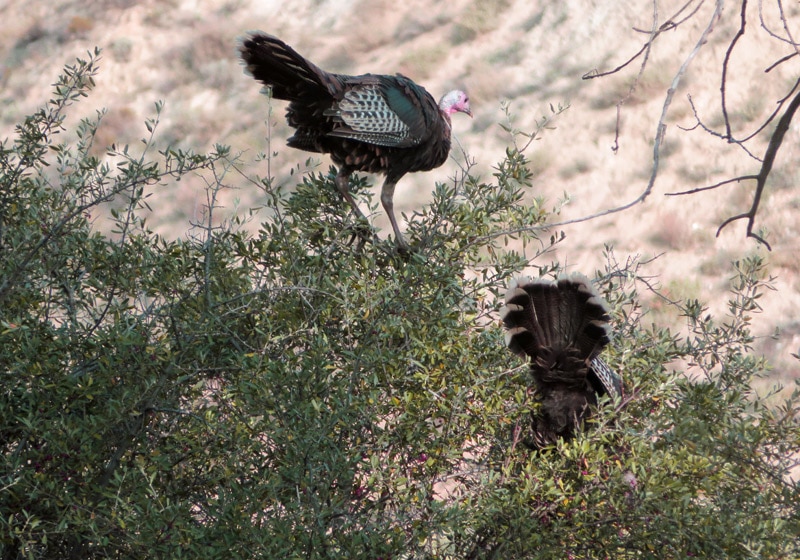 Elk were reintroduced to the park in 1985 and now live primarily in the South Unit. Elk live in groups and tend to wander around the flatter grasslands near prairie dog towns at dawn and dusk, while hiding in wooded areas during the day.

As for deer, I found the deer here to be far less skittish than those in other parts of the country. Several were eating grass near the road and barely paid any attention to my vehicle as I drove by. One even strolled across the road right in front of me, in no particular hurry. 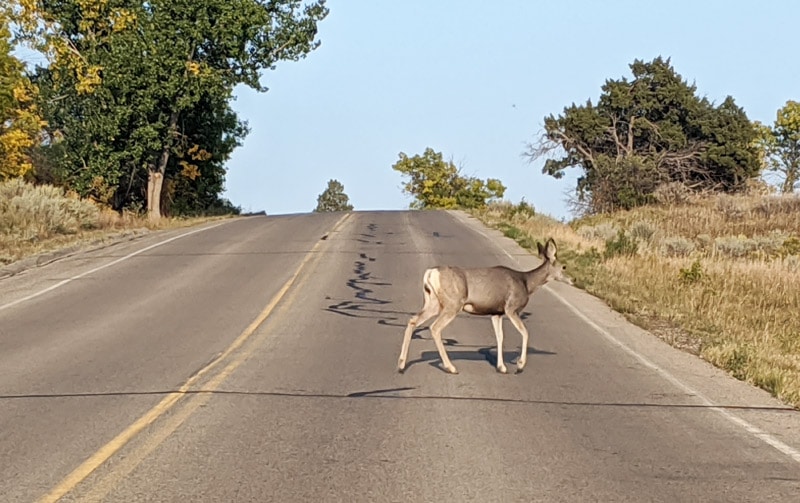 I saw deer in both the North and South Units, not far from the entrances of each. While hiking Buckhorn Trail, I saw a deer that hid behind some shrubs when it saw me, but never ran away. 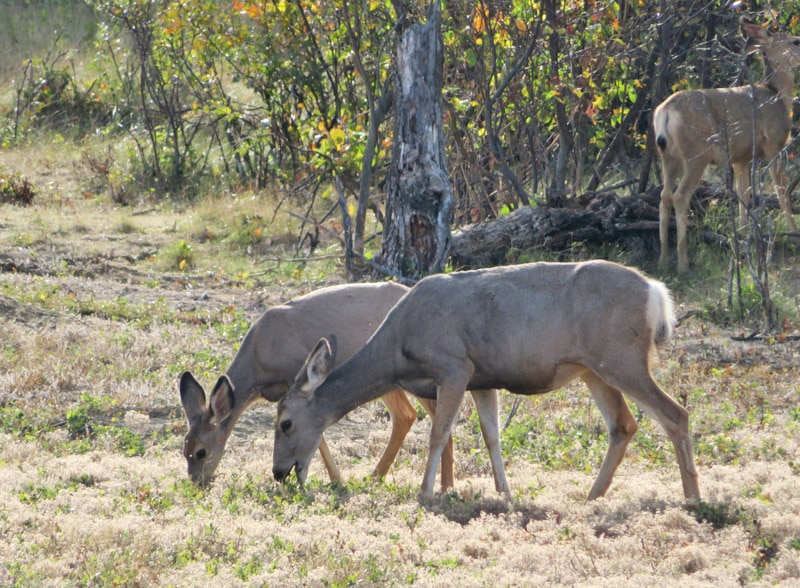 There’s a small population of bighorn sheep in the North Unit and the surrounding lands. Your best chance to see them might be on the rocky cliffs just outside the North Unit.

Mountain lions and coyotes are known to inhabit the park but are unlikely to be seen. There’s even some cattle in Roosevelt NP – a small group of longhorn steers live in the North Unit around mile marker 2 of Scenic Drive.

And pronghorns (deer-like mammals) live in the area. I managed to see a single pronghorn outside the North Unit on someone’s farmland.

Other animals inside Roosevelt include porcupines, bobcats, eagles, badgers, and beavers. Here’s the NPS page with additional suggestions on where to see the wildlife.

Roosevelt National Park is a must-stop if you take a northern Midwest road trip, such as the drive from Chicago to Seattle. Or if you’re taking a North Dakota road trip through the Sheyenne River Valley National Scenic Byway.