Before Forest Canyon Overlook in Rocky Mountain National Park, I had never driven at such a high altitude that I encountered signs warning me about the possibility of rapidly changing weather conditions. Danger? Count me in.

It’s not possible to drive directly to the highest point in Rocky Mountain National Park, but you can drive pretty dang high. Trail Ridge Road will get you above the treeline and give you some awesome views. 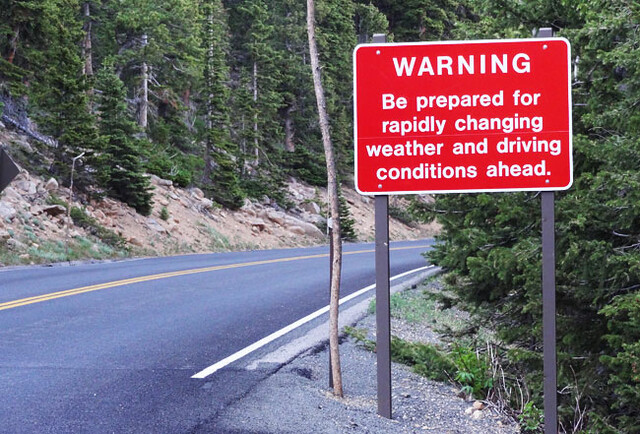 Read on to learn what it’s like to drive on Trail Ridge Road, and also to learn what the very highest peak in Rocky Mt. National Park is and how to get there.

This mountainous section of Trail Ridge Road isn’t the highest road you can drive on in Colorado – scroll to the end of this article to find out which road is highest. But it’s the highest altitude road in the park. Being at 12,000 feet is still really, really high.

To be precise, the highest elevation on Trail Ridge Road (US Route 34) is 12,183 feet. The road is closed from October to late May, because it’s way too cold and snowy.

In the summer, though, the sun is out and everything is clear. What a view. 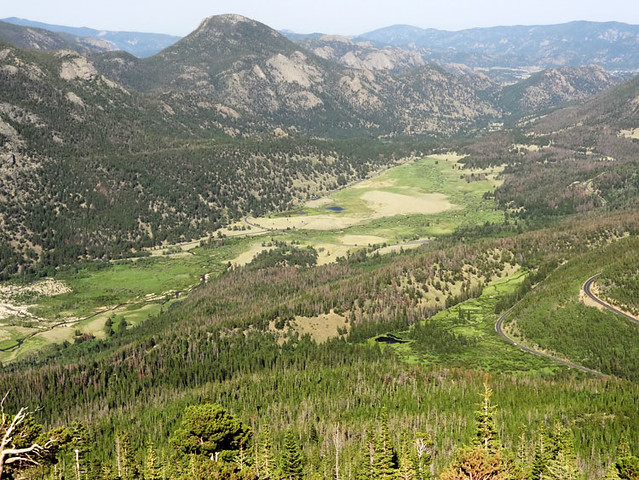 I didn’t experience any “rapidly changing weather,” except for fierce winds whipping the entire time I was up there. Fortunately, my Scottevest kept me plenty warm. 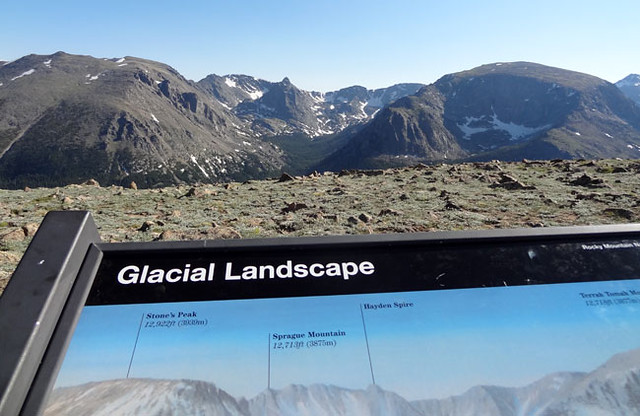 Eleven miles of the road are completely above the treeline. Once you get that high, you’ll only see wide open land and mountains.

The best spot up there is Forest Canyon, an overlook spot with views of snowy mountains, green forests, and rocky hillsides.

One of the coolest things about Forest Canyon was the presence of marmots running around on the rocks. This guy greeted me right in the parking lot. He didn’t even flinch as I pulled up the curb just a few feet away.

The marmots aren’t hard to find. Just look closely in all the piles of rocks. And listen for the constant meeping. 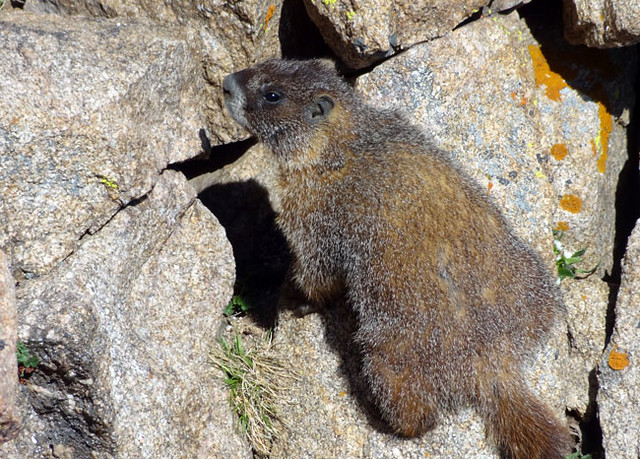 I wasn’t the only one doing my best to get an up-close shot of these critters. 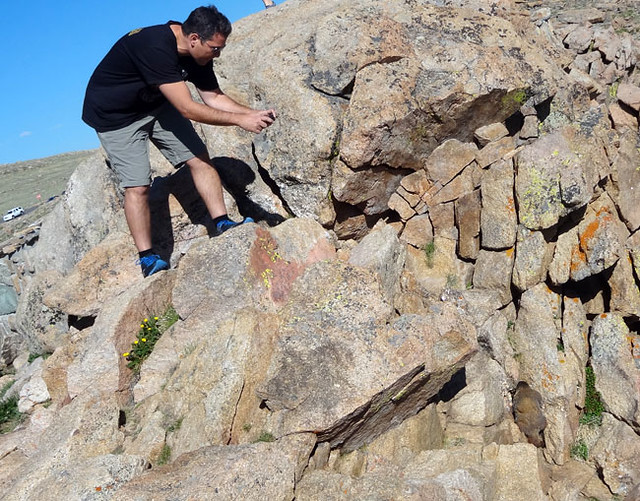 The Forest Canyon Overlook is a great place to get one of those “top of the world” shots. If I hadn’t been flying solo, I would have taken several (dozen) of myself on the ledges. 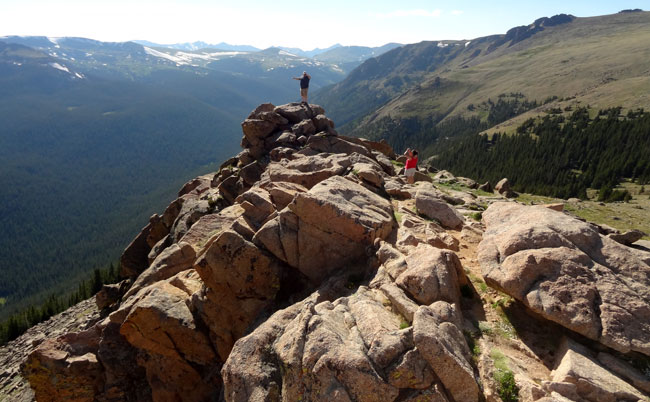 Props to the few colorful plants that are able to grow in tundra conditions. 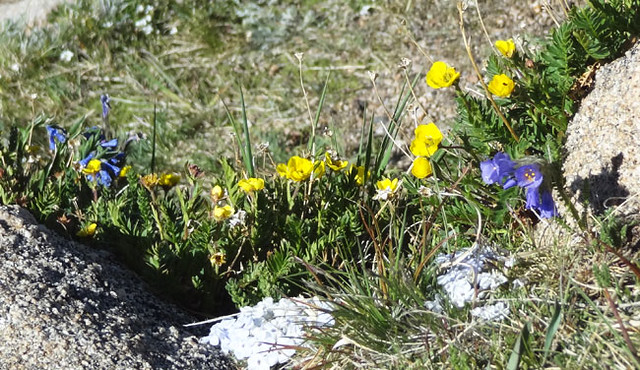 From a distance, the overlook and its tourists were dwarfed by the mountains. 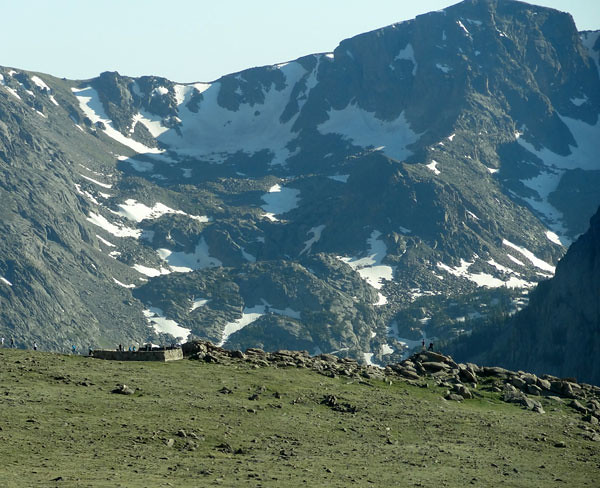 For those of us who don’t live at elevations like this, seeing snow in the summer is irresistible. This family engaged in the required snowball fight. I’m pretty sure they were in an area marked “no trespassing,” but can you blame them? 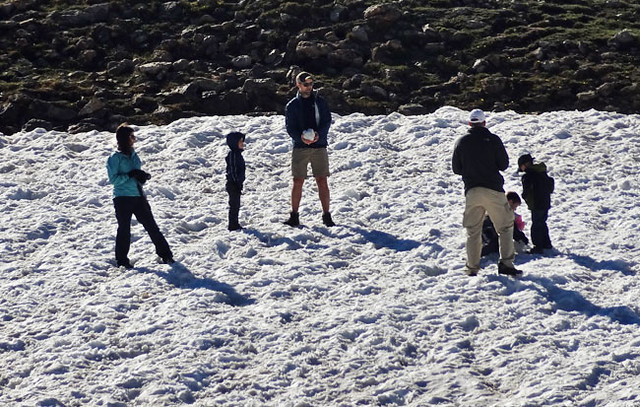 On the long drive back down to my campground, I passed a few elk hanging out on the hillside. I like elk a lot more than deer, because they won’t run if you stop the car on the road next to them. Instead, they stand and pose like supermodels. Work it! 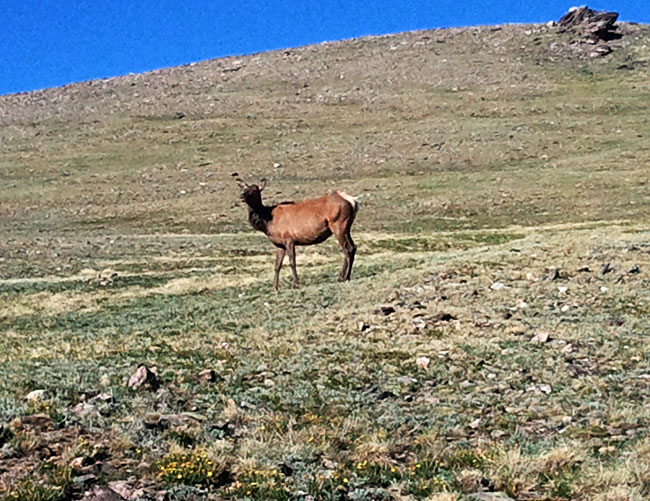 As it turns out, the official elevation at Forest Canyon Overlook is 11,712 feet, but you can keep driving to go higher to reach 12,000. Or take a short hike up one of the mountain trails. Just don’t push yourself too far or too fast to avoid altitude sickness!

What is the Highest Point in Rocky Mountain National Park

The actual highest peak in Rocky Mountain National Park is Longs Peak, which measures in at 14,259 feet elevation above sea level. However, you can’t drive anywhere near that particular peak.

Getting to Longs Peak requires a 14.8-mile roundtrip hike that includes more than 5,000 feet elevation gain. Obviously, this hike is ideal for summer, when there’s less snow. Expect to take 9-10 hours if you’re traveling at an average pace.

What’s the Highest Point in Colorado You Can Drive To?

As noted earlier, Forest Canyon Overlook isn’t the highest point in Colorado you can drive to. In fact, it’s not even in the top 20!

That distinction belongs to Mount Evans, a 14,264-foot peak with a road that allows you to drive to the summit. That makes it the highest drivable road in the USA and the highest paved road in all of North America! Mount Evans is not in Rocky Mountain National Park, but is a 60-mile (90-minute) drive from downtown Denver.

Later, I attempted to hike Deer Mountain, a 10,000-foot peak with an easy trail to the top. Or so I thought. I followed the trail for a good hour and just when I thought I was getting close to the summit, the trail winded around the backside of the mountain and started heading down. I was so confused.

When I got back to the trailhead and took another look at the map, I realized the problem. I was supposed to branch off at a certain point, because the summit is actually not on the main trail. If only I’d taken this pic before I started the trek. 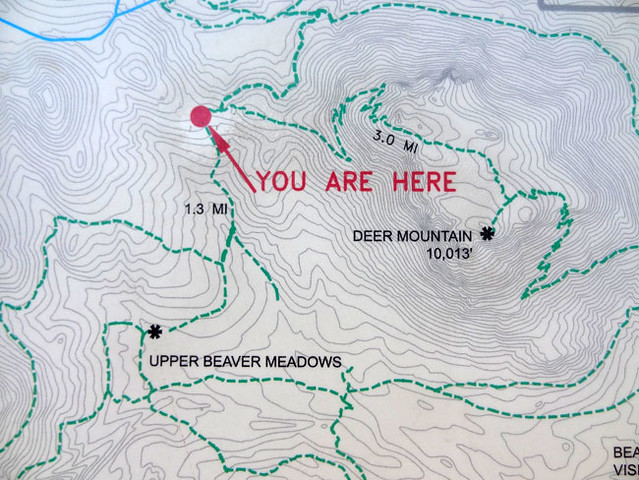 The problem with Deer Mountain is there are no signs anywhere! You’d think there would be an arrow pointing to the summit when the trail reaches the part where it becomes necessary to branch off. But nothing. You fail, Rocky Mountain National Park rangers. Just like when they failed to tell me where to see bighorn sheep.

I was slightly nervous during the hike because of all the caverns and caves created by giant rocks. Mountain lions could easily be living in there. 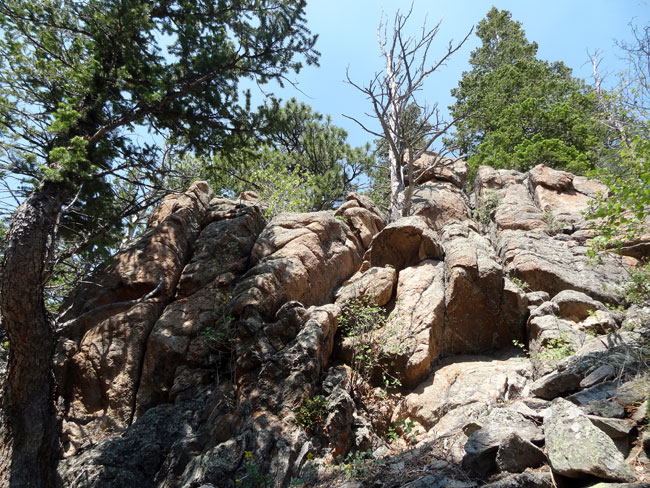 I have little to no fear of bears. But mountain lions terrify me. There’s no mountain lion repellent spray. Mountains lions sometimes attack rather than moving away from people. And I vividly remember an episode of “I Survived” that documented a mountain lion attack on an elderly couple in this very park. Fortunately, this hike for me was lion-free.

The sunny, summer views were worth it. 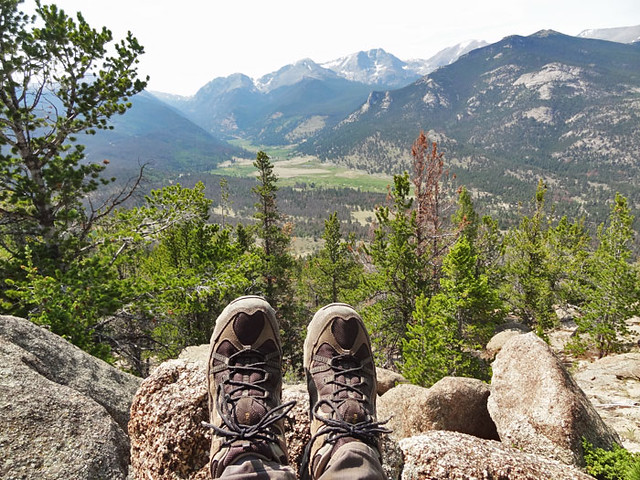 So I didn’t make it to the highest point in Rocky Mountain National Park. But hiking at 10,000 feet and driving to 12,000 feet was still pretty awesome. It’s an experience you don’t get to have in most parts of the world!

12 thoughts on “Driving Above 12,000 Feet: Searching For the Highest Point in Rocky Mountain National Park”