As the taxi pulled up to my casa particular in Centro Havana on a dark summer night, I felt uneasy. The street was poorly lit, the buildings were dilapidated, and lots of residents were out hanging out on the sidewalks, going no place in particular. I had to wonder whether this part of Cuba is dangerous.

My experience and street smarts told me this was not a safe place to be walking around at night. Moreover, since American credit and debit cards weren’t accepted in Cuba, I had my entire week’s worth of cash in my pack. I felt uncomfortable and vulnerable. 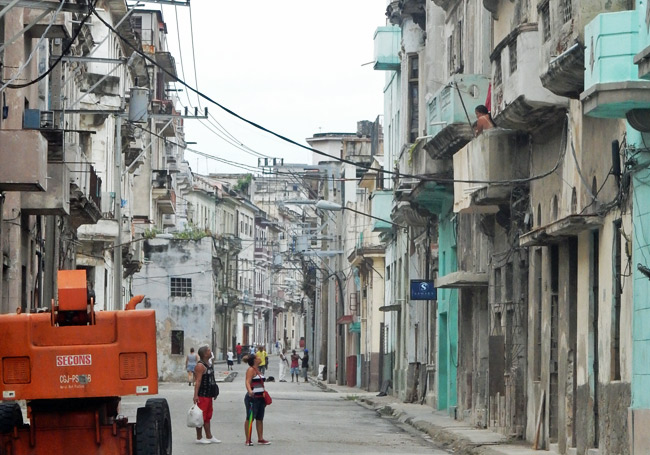 It turns out my fears were unfounded. The street I was on was perfectly safe. In subsequent days, once I got to know the area, I would walk around there at night with absolutely no issues. My initial impression was incorrect.

Cuba is not a particularly dangerous country. There are some of the usual issues regarding scams and minor crime, however. Havana may have slightly more concerns than some of the more remote cities, but Havana isn’t extremely dangerous either.

Let’s dig into the truth about crime and scams so that you’ll be prepared when making your visit to Havana, Cuba.

Is Cuba dangerous? The truth about crime on the island

Say what you will about the country’s strong government that rules by fear – one positive result of such an arrangement is that residents are pretty much well-behaved. They’re generally not going to mug you or do anything violent.

Of course, there can always be exceptions. No country is totally crime-free, so use your best judgment and common sense. But for the most part theft is just an occasional minor issue, and violent crime is extremely rare. Taxis and buses are safe. Police are visible in tourist areas.

It’s difficult to get official statistics for crime in Cuba, but World Nomads confirms that most of the crime in Cuba is the minor variety – snatching of wallets and purses in crowded areas, for instance. Keep your belongings close to you, but don’t get overly worried or concerned as you explore the country.

Numbeo, which aggregates user-submitted reports, rates Cuba as “Low risk” for thefts. muggings, and attacks. Safety walking alone during daylight and at night are both rated as “Safe.”

Part of the reason why Cuba may feel unsafe at times is because many of the buildings are older and run-down. If I saw streets like these in Chicago, I might think twice about being here. But these are just typical streets in typical Havana neighborhoods. Many of the places are nicer on the inside. 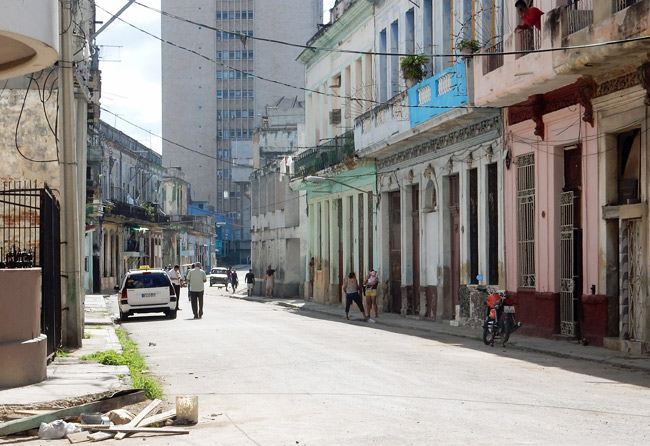 As my casa particular host informed me, while crime isn’t common, scams and hustlers can be. People may not steal your money here, but they will try to obtain it from you by means of persuasion or trickery.

If you’re really concerned about crime here, you can always join a guided tour so that you’ll have a local chaperone and the company of other travelers. Here’s our guide to some of the top tours in Havana for visitors.

Money scams to worry about in Cuba

Cuban money is confusing. There are two different currencies: The CUC, which is the tourist money, and the CUP, which is the local “peso nacional.” The exchange rate is roughly 25 CUP for one CUC. Learn which bills are which! (The CUC bills have buildings and statues on the front, while CUP have faces.) You don’t want to be the tourist who gets CUP back in change instead of CUC.

The unfortunate side effect of knowing about Cuban scams is that I was always on guard. For instance, one common scam I read about was that a local would become friendly with a group of tourists and drink with them all night, then stick them with the bill. 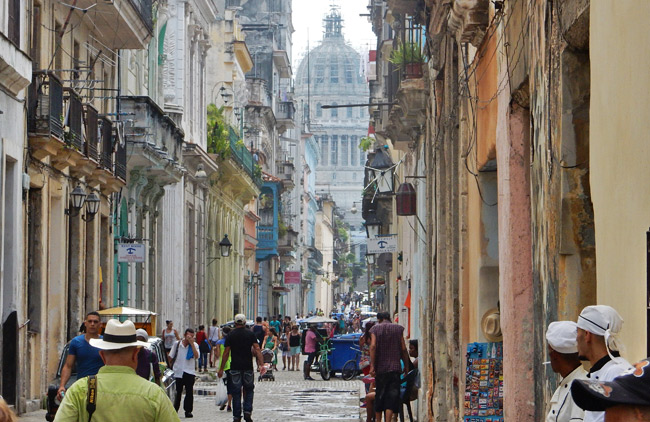 So one evening in Viñales when a local began chatting with us at a bar, I was wary. I made sure that he bought his own drinks and we paid for our own as we went. Ultimately, he really was just being friendly, and we had a nice chat about the politics of our respective countries and about life in general. I felt bad that I had been suspicious of his motives.

Other semi-legit ways Cubans will seek your money

There are less-devious ways that Cuban residents try to earn your tourist dollars. Many restaurants have attendants sitting outside the bathroom doors, and you have to pay them a small fee to use the bathroom.

Sit-down restaurants are good about providing change, but taxi drivers and other vendors will claim not to have change, so be sure to have small bills or you could end up overpaying at some locations. And always agree on the price of a cab ride before getting in or they will charge you through the roof. You can and should negotiate taxi prices.

Sometimes, a local will start chatting with you, offering advice or guiding you to a destination. He may act like your best friend, but chances are he will then expect a tip. And some street performers like this living statue will hope for a tip if you take their photo. 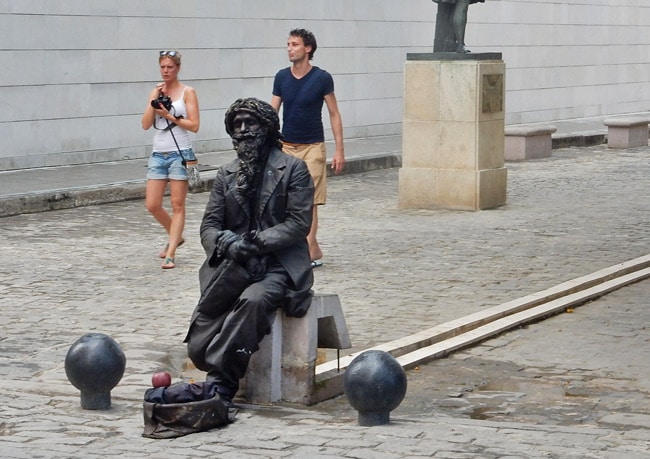 At Callejon de Hamel, a very cool artsy performance space near my casa in Centro Havana, one of the guys who worked there gave us a tour and then wanted us to buy his CDs and art.

At restaurants, bands will show up and start performing and then go around the restaurant expecting you to buy their music or leave a tip. Generally, it’s best just to leave a small tip if you enjoyed the music rather than getting upset at the unexpected setback to your budget.

On my last night in Havana, I was very low on cash, since I made the rookie mistake of not exchanging enough money at the airport. After setting aside enough money for the next morning’s cab ride to the airport, I was down to my final $7. That was just enough to buy a veggie burger at this cool beach-style cafe called the California Cafe.

After I started eating, lo and behold, a band showed up. Since I had no more money, I had to leave without tipping them. As I left, one of the musicians followed me around for a while.

Not in an ominous way – he had a smile on his face the whole time and was begging rather than demanding – but he was persistent, refusing to believe that a rich American tourist did not have money for a tip. He finally gave up after a block or two.

Be smart, and you won’t have to worry a whole lot about crime in Cuba. The inconveniences with scammers or people who want tips are likely to be your worst experiences in Cuba. Here’s another good summary of crime concerns in Cuba if you’d like a second opinion.

Do you think Cuba is dangerous? Leave a comment with your experiences!

3 thoughts on “Is Cuba Dangerous? Crime and Scam Concerns in Havana”