I’ve been living in Seattle for a few years now, and I still get awestruck every single time I see Mt. Rainier. The majestic peak stands at an elevation of 14,411 feet, making it one of the highest mountains in the continental USA.

And it’s less than 100 miles from downtown Seattle, which means I see it all the time just driving around the city!

If you’re unable to make the trek out to visit the national park and just want to view the peak while you’re visiting Seattle, you have several options. Where can you see Mt. Rainier from Seattle? The Space Needle is a good option, but there are loads of other viewing spots to choose from.

Unfortunately, all of them depend on the weather. If it’s cloudy and rainy, you won’t see Mt. Rainier. But if it’s clear, you have lots of options. Read on!

Mt. Rainier is, of course, located in Rainier National Park. Take a look at our list of 20 cool things to do at Mt. Rainier if you intend to drive all the way there.

The Best Time of Year to Visit Seattle for Rainier Sightings

Summer provides the best opportunity to see Rainier. Seattle summers are beautiful. The skies are clear, the sun is hot, and the temperature usually doesn’t get much above 80 degrees F on most days.

From June through September, you’ll be able to see Mt. Rainier from Seattle more often than not. During the rest of the year, it’s a total crapshoot.

October and November still get some lingering sunny and clear days. But from December to February, it rains most days, and you’re unlikely to see Rainier from the city, unless you happen to be there on one of the lucky few days.

In the spring, the sun starts appearing more often, so it’s a tossup what kind of luck you might have in April or May. You may get lucky and have a perfectly clear day with a brilliant mountain view.

During winter, the entire mountain will be covered in snow. In the summer, much of that snow melts, but there will still be areas that are white from snow cover even while the rest of the mountain is clear.

Seeing Mt Rainier From the Plane

Okay, we’ll start with the obvious. You can see Mt. Rainier from an airplane if you’re flying into Seattle. Make sure to get yourself a window seat on the correct side of the plane!

Basically, if you’re coming from the east, sit on the left side of the plane. If you’re flying up from the south, sit on the right.

Here’s a map showing the flight path from Denver to Seattle. Since Rainier is southeast of Seattle (see the yellow dot), you’ll want to sit on the left side of the plane to view it on this flight. 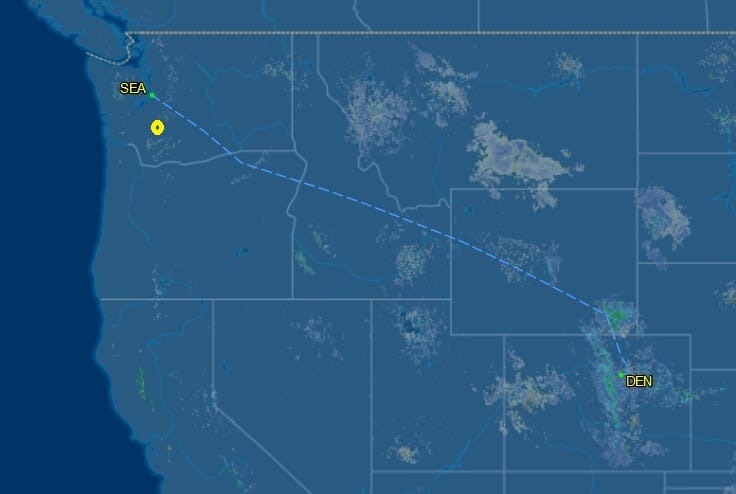 And here’s a map showing the flight path from Las Vegas to Seattle. On this flight, you’d want to book a seat on the right side of the plane. 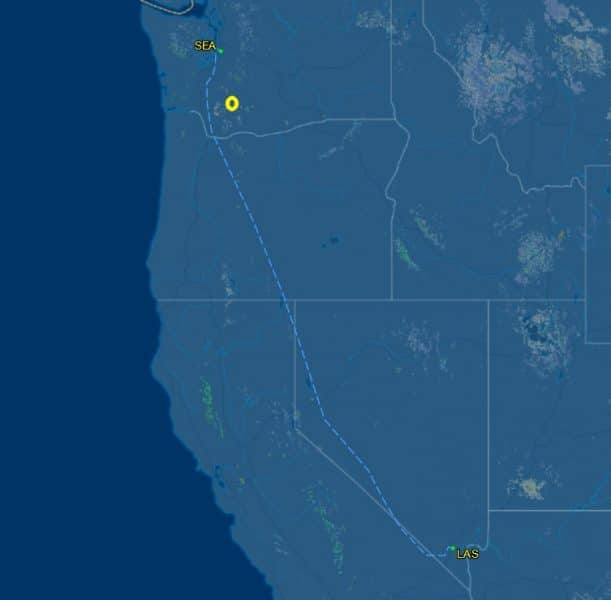 Also: If you take the light rail subway train from Seattle-Tacoma International Airport into the city, you’ll see Rainier right from the train platform on a clear day.

Just recently, I took a flight from Seattle to Phoenix, and I happened to be seated on the left side. What an incredible view of the volcano I got looking down from above! Even in early June, the mountain was still completely blanketed in snow. 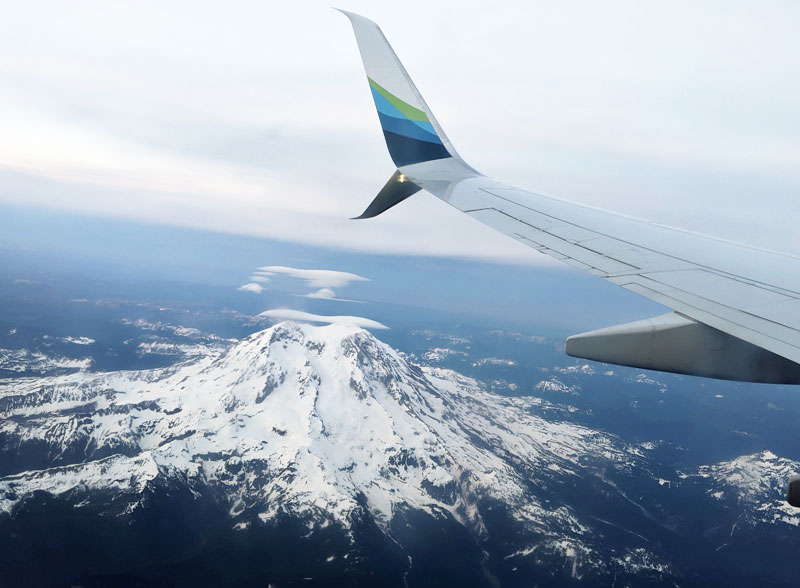 Seeing Rainier From the Space Needle

Next up is the most obvious place to see Mt. Rainier from Seattle: The famous Space Needle. I’ve taken the elevator to the top of the Space Needle twice.

The first time, visibility was poor so I couldn’t see the mountain. That felt like a waste of money. But the second time, it was bright and sunny, and I could see for miles in all directions!

As you walk around the inside of the Needle at the top, you’ll spot Rainier on sunny days. See it there in the background? 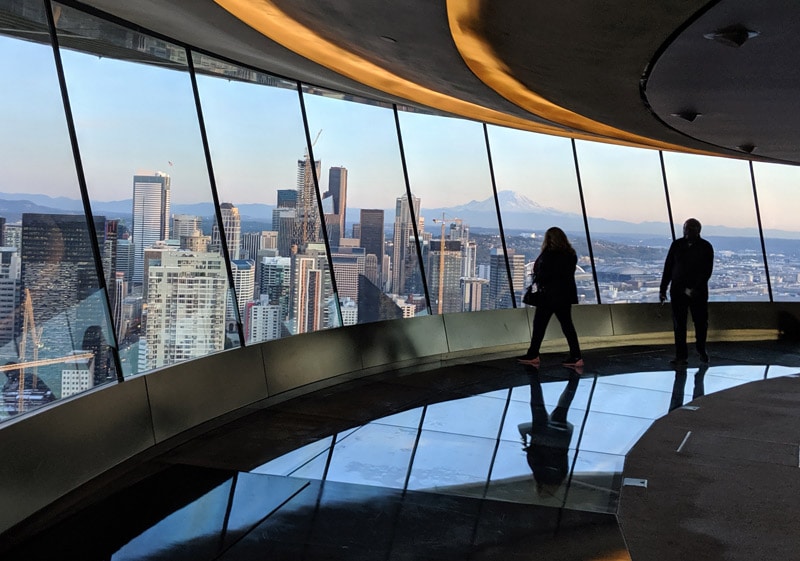 You can walk outside to the outer ledge for more personal views of Rainier and lots of Insta-worthy selfies. If you’re willing to splurge for the ticket (between $30-40), going up the Space Needle is a sure way to see Mount Rainier on a clear day.

The only drawback with the Space Needle? You may have to wait in long lines and fight crowds, since many others have the same idea.

Kerry Park in the Queen Anne neighborhood has long been considered one of the best places to overlook the entire city of Seattle.

From Kerry Park, you can see the Space Needle, the downtown skyline, and the mountains all around the city, including Rainier. This is a very popular tourist post for photos of the city, and it’s even better when Rainier appears in the background.

You can also take a short cruise around Puget Sound. This affordable cruise (less than $40) lasts an hour or two and takes guests past the downtown skyline and through the Sound, where you’ll easily be able to see Rainier if the weather cooperates.

The cruise is also a great way to learn about the history of Seattle. I highly recommend the this cruise! 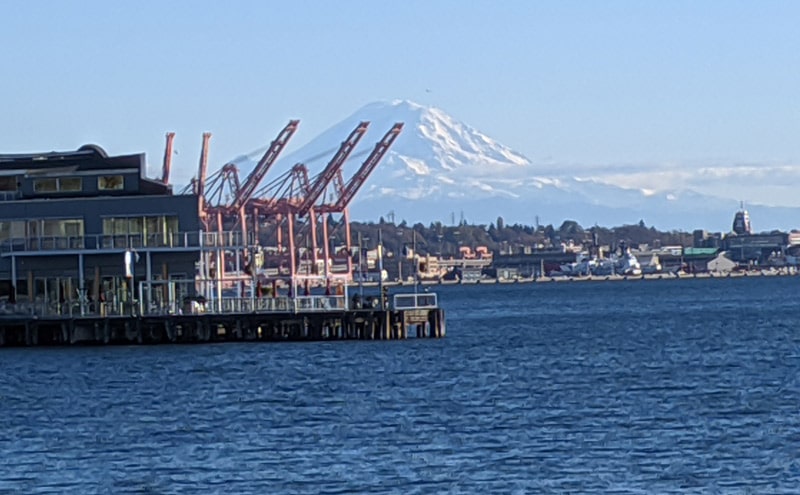 Ask any Seattle resident and they’ll tell you their favorite place to see the volcano from. There are several places along I-5 when the mountain will appear.

You can see it from the heart of the University of Washington campus on clear days. You can see it while driving in Beacon Hill and Columbia City on Rainier Avenue (there’s a reason they gave it that name!)

The West Seattle Bridge is a fantastic spot too. I have to take care not to wreck whenever I drive across that bridge, because I’m always staring over at the mountain instead of focusing on the road!

Don’t forget to consider other tall buildings with observation decks, such as Columbia Tower (the tallest building in downtown Seattle) and Smith Tower (a historic building in Pioneer Square.)

You can even spot Rainier while driving through the heart of the White Center neighborhood. Look at this view I had while driving south on an autumn day on Delridge Way SW! 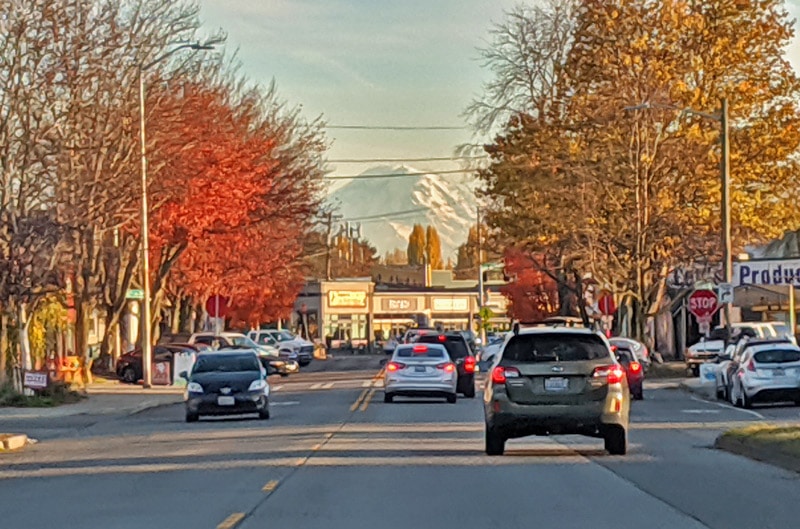 Places to See Rainier From Outside Seattle

If you’re willing to drive south from Seattle, you increase your odds of seeing the peak. Again, I-5 is the best option. I’ve seen Rainier from many of the suburbs in the Seattle and Tacoma area.

Even a Walmart parking lot can make for a scenic landscape! This shot was taken at the Walmart in Puyallup. 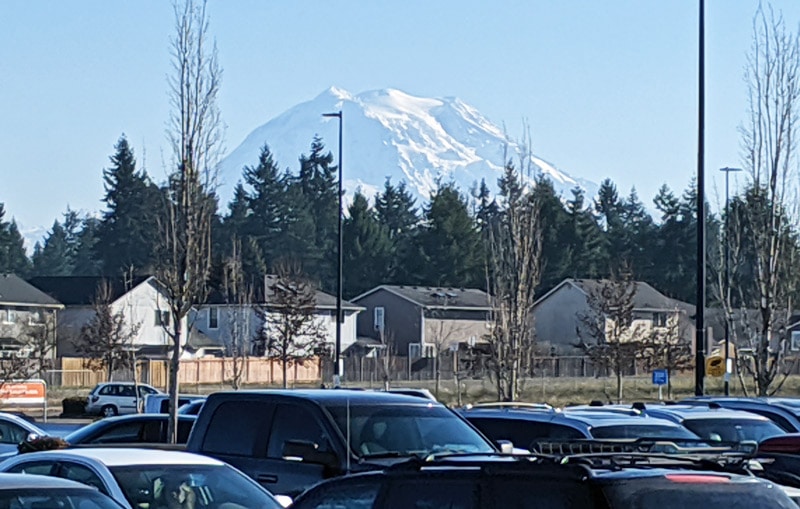 You can always drive right to the park. If you have a few days, I recommend doing a road trip through Mt. Rainier and Olympic National Parks to see both in the same week! Maybe you’ll even see wolverines there!

You could also go north to some of the islands in Puget Sound. There are several spots on Whidbey Island where you can get a clear (but distant and faint) view of Rainier.

In fact, from Ebey’s Landing, you can see the mountains of three national parks at once! The peaks of Rainier, Olympic, and North Cascades national parks are all visible on clear days.

Threat from Mt Rainier: Is Seattle in Danger?

Rainier is an active volcano. In fact, it’s overdue for eruption. When it does blow, the communities in the immediate vicinity are going to be in trouble.

Here’s a map showing which communities will have to worry about dangerous lava flow. The city of Seattle should be fine, but places closer to Tacoma and Federal Way could deal with lava and debris flowing down their rivers.

An eruption of Mount Rainier would likely cause air travel to be grounded in this part of the country for awhile, just as happened when Mount St. Helens blew in 1980.

My Experiences Seeing the Peak 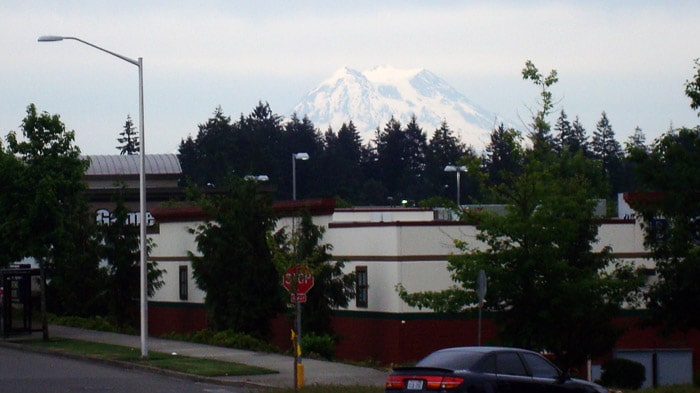 The first time I saw Rainier, I was flying from Chicago to Portland. I hadn’t done my homework and didn’t even know what Rainier was – which made the experience all the more special.

As we neared the end of a non-descript flight, I suddenly looked out my window and saw the most massive peak I had ever seen in person. It just got bigger and bigger as we got closer.

I couldn’t believe it – the peak reached as high into the air as the plane I was flying in! It was the first and only time I’ve ever been in a plane and looked “over” at something, rather than “down.”

I was too stunned to think about taking a photo until it was too late, but its majesty made for an unforgettable first impression of Mt. Rainier.

After moving to Seattle, I now see the peak regularly, and it always blows me away. It’s so awesome to be so close to a national park with such a massive volcano!

Do you have any other suggestions for great places to see Mt Rainier from Seattle?

19 thoughts on “How to See Mt. Rainier From Seattle: Where To Get the Best Views”