I’m wrapping up my coverage of the Twin Cities in Minnesota with a few random observations and sights from Minneapolis and St. Paul. Topics include the Juicy Lucy burger, Minnehaha Falls, and the bike culture.

The funniest thing I encountered in the Twin Cities was a short, skinny old guy with a gray beard running through the streets of downtown Minneapolis in a pair of shorts and a cape that read “Jesus Saves.” “Look at Pops go!,” yelled one kid on the street as the guy raced through the shopping district during daytime business hours.

It was totally bizarre and random. Which made it awesome. Capes are cool, by the way. I want to bring back the cape as the next hipster fashion statement. 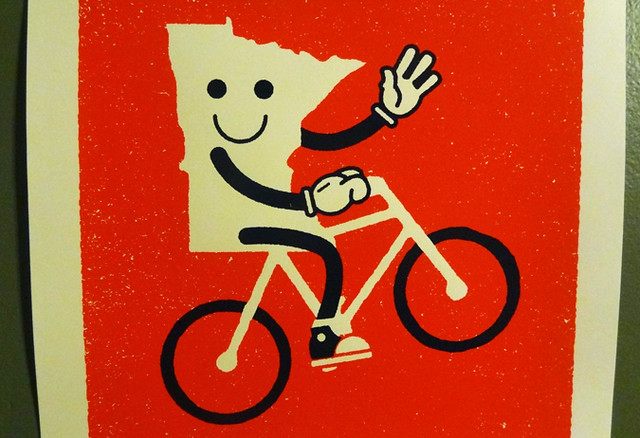 The Twin Cities are a good place to bike, with a solid local biking community and plenty of trails and bike paths.

My couchsurfing hosts and I were able to bike around both Minneapolis and St. Paul without much problem, except when one street was under construction and we had to take a shortcut through the woods. Urban adventurers! 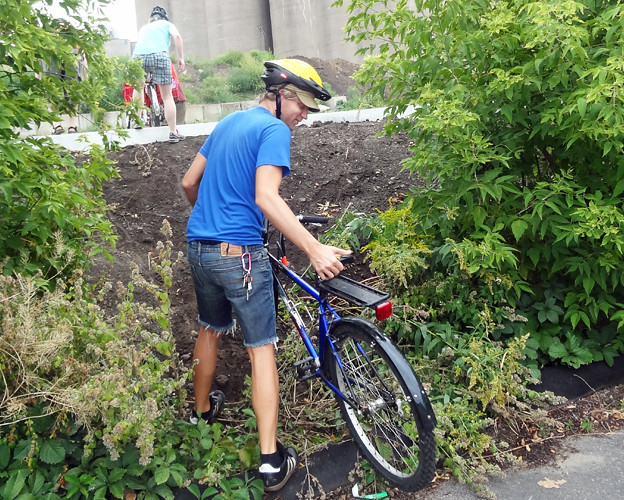 I tried to find the food that Minneapolis is known for, but I wasn’t having a ton of luck. One person suggested tater tots. Another mentioned the Juicy Lucy, a burger offered by a couple of local restaurants in which the cheese is stuck inside the burger.

This sounds like an interesting concept, but in practice it’s not exactly a culinary winner. When you bite into the burger, a puddle of steaming melted cheese and beef grease shoots out.

I’m glad I tried the Juicy Lucy, but from now on I’ll be leaving the cheese on top of my burgers.

My favorite natural wonder of the Twin Cities is Minnehaha Falls. Located not far from the Mississippi River, the falls are 53 feet high. They freeze in winter, which probably makes for some really cool sights. The Minnehaha Falls are inside Minnehaha Park, along with the Minnehaha Depot, near Minnehaha Creek.

For some perspective on its size, see if you can spot the two men fishing in the lake at the bottom of the falls.

READ NEXT
Visiting Hawaii's Big Island: Should You Spend More Time in Hilo or Kona? 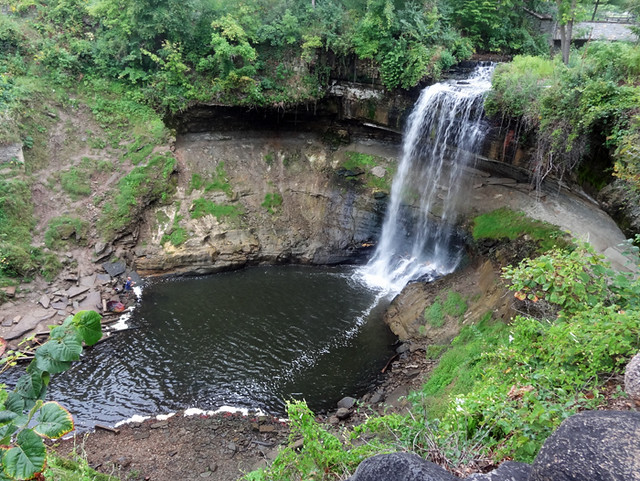 I wandered past a dreadlocked busker playing Bush’s “Glycerine.” Ninety minutes later, when I passed again, he was playing the same song. I wondered if that was the only song he knew, or if he had gone through his entire repertoire and worked his way back to the beginning of his playlist.

I’m not sure how the locals feel about their transit system, but as a visitor I was very pleased. Their rail lines go through most of the neighborhoods you’d want to visit. I definitely wasn’t expecting the rail to go all the way to the Mall of America. 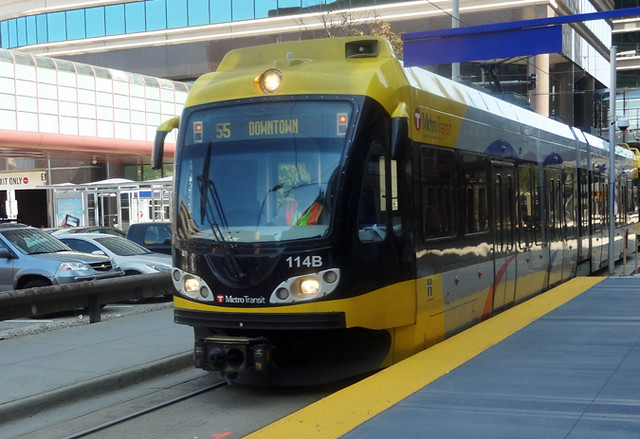 The rail is currently being extended past the university district into the heart of St. Paul. I don’t of many cities around the country that are actually growing their transit systems, so kudos to the Twin Cities.

While driving through St. Paul to see Indian Mounds Park, I randomly discovered a college radio station on 100.7 that played one of the best mixes of indie music I’ve ever heard. It’s the student-run University of Minnesota station KUOM.

With Bat for Lashes, Grimes, Of Montreal, Crystal Castles and the Velvet Underground on the dial all within the same hour, this station won me over so much that even after I returned home I began streaming it live online. 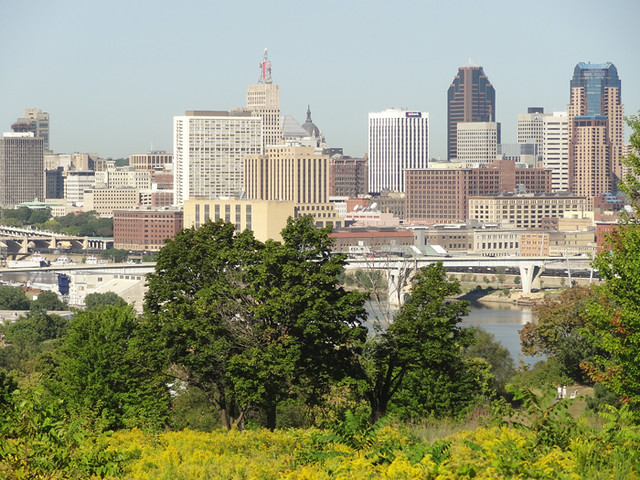 Thanks to its large Somali population, Minneapolis has one of the largest Muslim communities in the United States. You see women wearing head coverings and scarves everywhere – on every train, in every store, at every event. It’s interesting to note because you don’t see that in most places in the U.S., even larger, diverse cities like Chicago.

I’m sure they face discrimination at times, but for the most part, the non-Muslim locals seem unfazed and treat them like everybody else. The irrational fear of Muslims that pervades certain parts of the country is absent here, and it’s nice to see.

Mill Ruins Park in downtown Minneapolis along the Mississippi River is a cool place to bike and walk. Or to show up early in the morning for a sexy photoshoot among the ruins. This is on the grounds of the Mill City Museum. 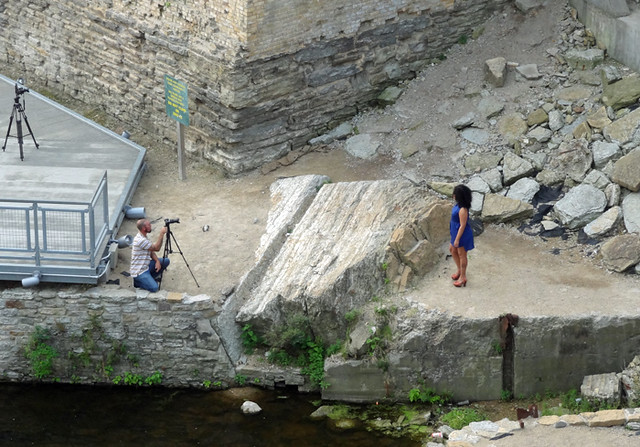 10 That giant cherry on a spoon

Yeah, you have to take a picture here. It’s the Minneapolis Sculpture Garden. 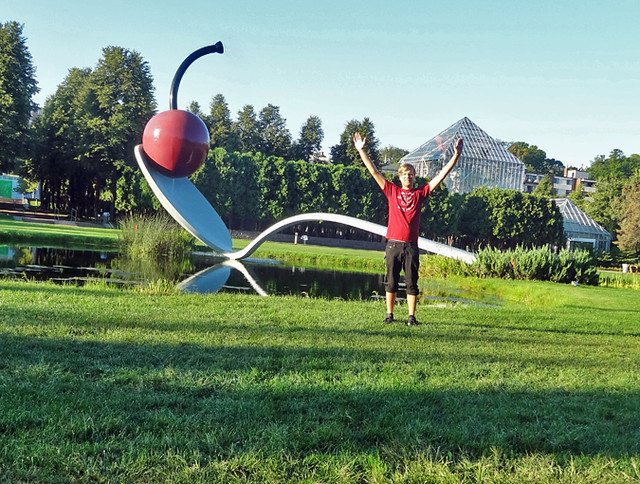 11 Break the bank to rent a bike

As part of the Twin Cities’ efforts to be a great place to bike, they offer bike rentals all over town, where you can pick up a two-wheeler, ride it around and return it later. They have a very weird pricing structure, though. If you rent a bike for five consecutive hours, your total charge would be $52. That is insane!

The way to get around the charges is to ride to the next station, return your bike within 30 minutes, and pick up a new one. If you constantly make short trips of less than 30 minutes, you can avoid any extra charges. But that seems incredibly inconvenient. 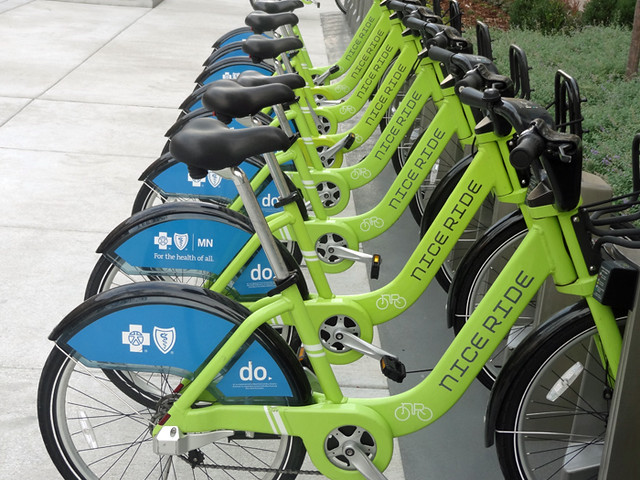 The state capitol in St. Paul. My primary reason for visiting here years ago was to see the governor’s portrait of Jesse Ventura. And to add to my list of state capital cities visited (I’m up to 20.) 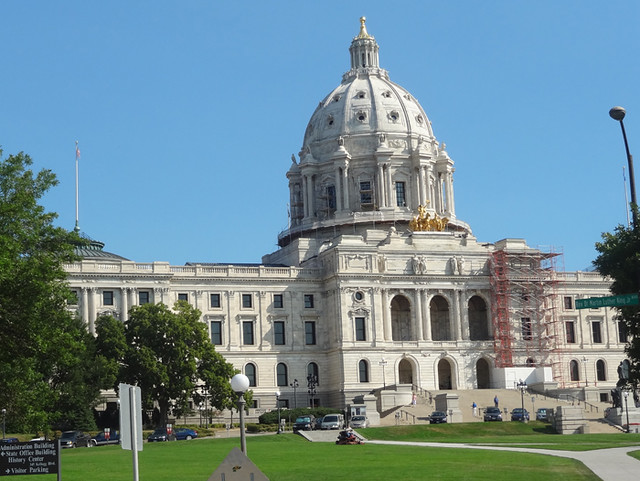 The concept of “Minnesota nice” is real. I constantly encountered people being super-friendly and helpful to strangers on trains, in parks, everywhere. Coming from a big-city urban environment where people tend to be cold to strangers, I was caught off-guard by this phenomenon.

Thanks for having me, you sickeningly sweet friendly people of the Twin Cities. I will be back someday! I will enjoy those beaches in Minneapolis once again too!