No matter how bad the weather is, one thing you can always do in Chicago is check out some of the city’s legendary food. Deep dish pizza, Italian beef sandwiches, and Chicago hot dogs are the most famous culinary creations in town.

The Windy City is also becoming known for a number of new trends, like donuts and cupcakes. Checking out the food scene is one of the best things you can do during a winter visit to Chicago.

Here’s an introduction to some of the best Chicago food that you must try when you visit the city! 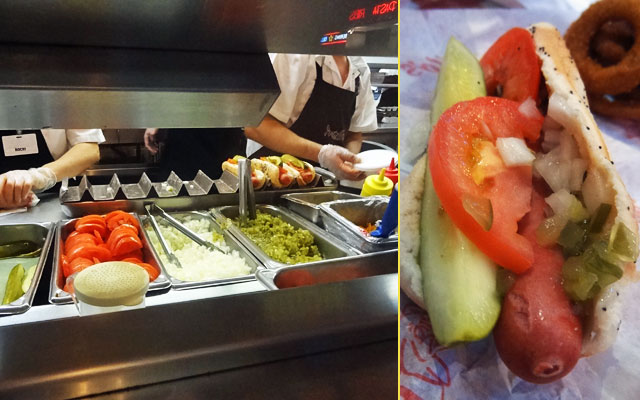 A good place to start is with the dogs. The traditional Chicago hot dog features mustard, raw onions, hot peppers, tomato slices, a dill pickle spear, green pickle relish, and celery salt. Hot dog stands exist in pretty much every neighborhood and every corner of the city, so you’d have to try pretty hard not to find one.

But one word of warning: Whatever you do, don’t put ketchup on your Chicago hot dog!

Seriously, this is about as big a sin as you can commit in the Windy City. Don’t do it, or you’ll be arrested and charged with treason.

Chicago’s opposition to ketchup goes back decades, and there seems to be no particular reason for it, except that hot dog makers and connoisseurs believe the sugary spread defiles the true flavors of the beef and its salty toppings, ruining the meal.

Many hot dog vendors in Chicago don’t even carry ketchup and will not provide it if you ask. Trust me, once you start putting fresh tomato wedges on your dog, you’ll never go back to catsup.

If you’re searching for a “different” kind of Chicago hot dog stand experience, make sure to check out the Wiener Circle. Be ready for a confrontation.

I didn’t realize until I saw an episode of Man vs. Food that Italian beef sandwiches are big in Chicago. Italian beefs are similar to the Philly cheese steak, but way better.

Like their Philadelphia counterparts, these beef sandwiches are served on a long roll. Thin slices of roast beef that have been simmered in a seasoned broth are stuffed inside the bread and topped with your choice of sweet peppers or a hot pepper mixture called giardiniera. 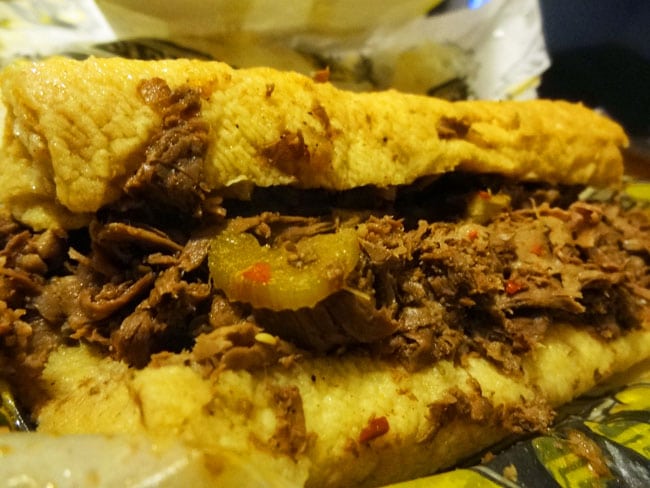 For the more authentic experience, you’ll want to get the sandwich “dipped,” which means the entire thing, bun and all, is submerged in a vat of beef juices. Count on needing a fork or lots of napkins to help you scoop up this dripping, soggy (but delicious) mess. I’ve experienced many a food coma after gobbling down a hot beef.

Al’s #1 Italian Beef has been in business since 1938 and is the most popular beef joint, but many sandwich shops and delis serve them.

Deep dish pizza is probably Chicago’s most famous food. The slices are so much better when you have to eat them with a knife and fork because of the thick crust and the massive glob of gooey cheese underneath the top layer of sauce. Deep dish is cool because the sauce goes on top of the cheese and toppings. 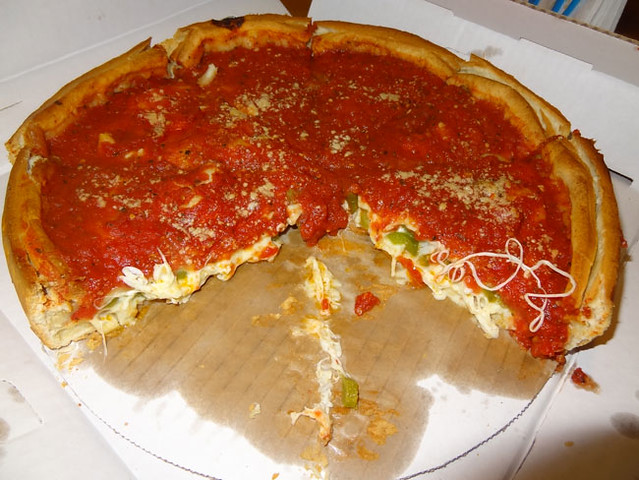 Some Chicagoans claim a favorite deep dish restaurant, but they’re all good to me. Try Giordano’s, Gino’s East, Lou Malnati’s or Pizzeria Uno. To avoid the crowds, I suggest going for a very early lunch, or getting delivery, because deep dish places in Chicago are packed.

Also, prepare for a long wait: These pizzas take around 45 minutes to bake, so expect to be sitting for quite awhile as you await your order.

The popularity of gourmet donuts and cupcakes has soared in Chicago in the past few years. Places like Sprinkles offer a variety of innovative cupcake flavors. Oprah once named Sprinkles one of her favorite things. If you arrive after business hours, don’t worry – help yourself to a snack from the cupcake ATM. 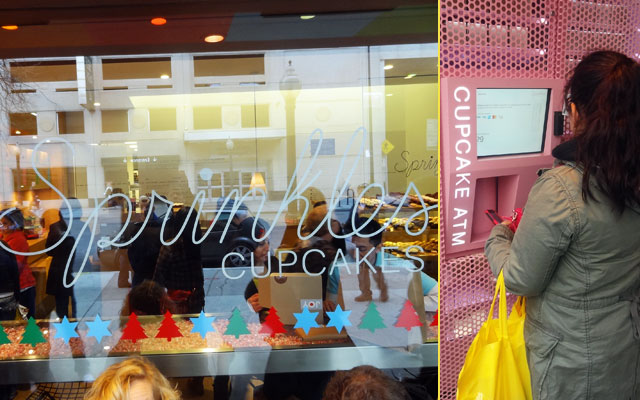 The Cupcake ATM itself has become a tourist attraction. You can’t beat the novelty of stepping up to a machine and withdrawing a chai latte, chocolate marshmallow, or vegan red velvet cupcake. They even sell doggie cupcakes!

Donut fans have many hot spots to check out, from Glazed and Infused to the Doughnut Vault to Do-Rite Donuts. Glazed and Infused’s multiple locations offer really cool varieties like candy cane twist, mint chocolate cake, and salted caramel crunch. They supposedly have a peanut butter & jelly version, but sadly that wasn’t being offered when I went to check it out. 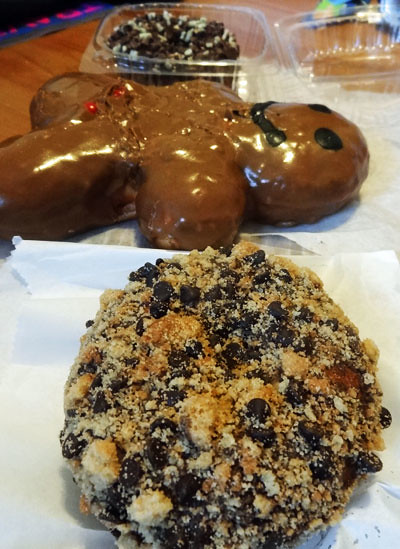 Glazed and Infused gets creative with the shapes of its donuts, including a gingerbread donut shaped like a gingerbread man, seen in the above photo with a chocolate chip cookie donut in the foreground. But most of this store’s donuts are standard size, which means their $3 price tag per donut is a bit steep.

The Doughnut Vault is a much better buy, because their $3 donuts are massive – at least twice as big as a normal donut. This place typically has lines that stretch around the corner, so get there early if you want to enjoy their birthday cake, pistachio, and blueberry old-fashioned donuts.

It’s true that I named Garrett’s the most overrated Chicago business. But that was due to selection rather than quality – they simply don’t offer enough flavors of popcorn to reach their full potential.

That said, Garrett’s does have two incredible flavors which are worth seeking out: cheese and caramel. Grab a bag of “Chicago Mix,” which contains the cheese and caramel popcorns mixed together, and you’ll wonder how you ever lived without it.

Caution: Be ready to brave long lines at any Garrett’s location you try to visit.

The Cake Shake at Portillo’s

Portillo’s is a Chicago institution. They have hot dogs, Italian beef, pasta, and numerous other dishes. But the main reason you should visit is to get one of their chocolate cake shakes.

It’s a milkshake with real chunks of chocolate cake and icing swirled inside. It’s ridiculously decadent and full of calories, but you’ll be glad you tried it.

I won’t try to encapsulate the city’s entire restaurant scene, because attempting to do so would be a hopeless task. In the warmer months, outdoor sidewalk seating is the way to go, but in the winter you’ll be chased indoors. Don’t let that stop you from making an effort to seek out some of the city’s best eats.

Chicago has lots of great upscale restaurants. Check out any issue of Time Out Chicago and you’ll find numerous suggestions. For a more affordable option, try the Chicago Diner in Lakeview or Logan Square.

Despite its humble name, the Diner is a modern vegan and vegetarian restaurant that serves the most satisfying ice cream treat I’ve ever had: a chocolate chip cookie dough peanut butter vegan milkshake. Yes, it’s just as good as it sounds.

Kuma’s Corner is a famous burger joint with a rock & roll theme. They serve massive, pretzel roll-stuffed burgers named after metal bands like Black Sabbath and Metallica, with unusual toppings that include herbed goatcheese, grilled pineapple, a chorizo and red potato hash, tortilla strips, and breaded deep-fried chiles. Expect at least an hour wait unless you show up at like 3:30 on a weekday afternoon.

Some of my other favorite affordable hangouts include the 90 Miles Cuban Cafe, Big Star in Wicker Park for tacos, the Kingsbury Street Cafe for brunch, El Cid for authentic Mexican, and Rio’s D’Sudamerica for Peruvian. Most of these places are on the west side, since that’s where I tend to hang out. Expect long waits at Big Star and Kingsbury Street if you go during peak dining hours.

Where would you eat if you visited Chicago?