If you find traditional art museums boring, head to the Moco Museum in Amsterdam and check out this sculpture of Mickey Mouse inside the stomach of a giant snake! 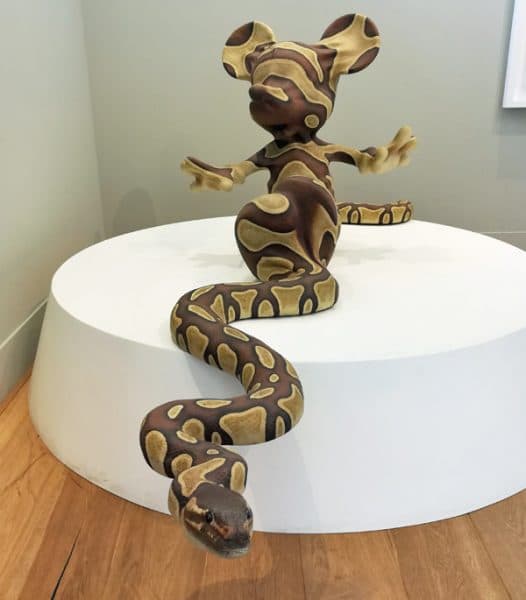 This piece, called “Mickey Snake,” is one of several by renowned street artist Banksy on display at Amsterdam’s Moco Museum. The Moco opened in 2016 and succeeds in appealing to a young, trendy crowd. It’s one of the best places in Amsterdam for Instagram-worthy photos!

Read on to discover what you’ll see if you visit the Moco Museum, including Banksy’s art plus unusual works by Andy Warhol, Salvador Dali, Keith Haring, and many other modern artists, both famous and unknown. 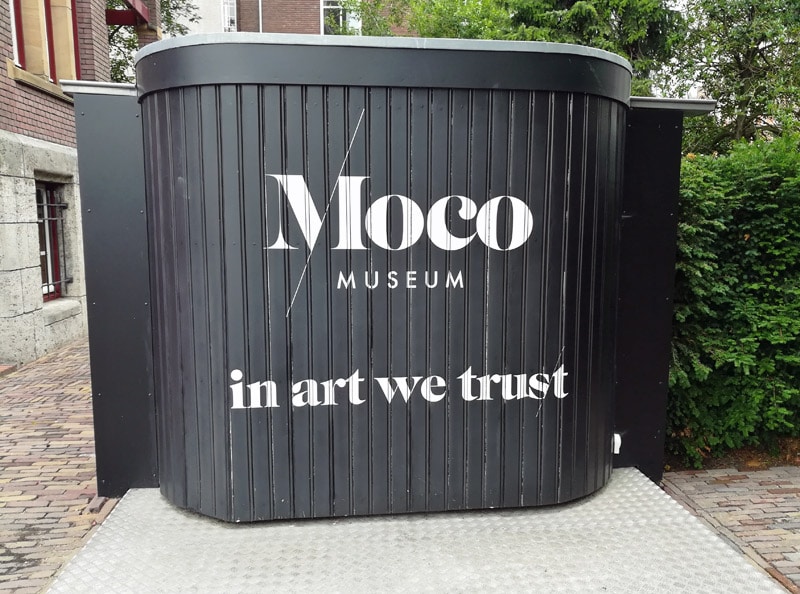 The Banksy Exhibit at The Moco Museum Amsterdam

By the time you read this, the Banksy exhibition – “Banksy Laugh Now” – may no longer be on display, since the museum rotates its collections regularly. However, because Banksy’s work is so popular, the Moco has already extended the exhibit well beyond its initial run. It’s been there since the beginning, in fact. So maybe you’ll luck out and find it “Banksy Laugh Now” still on display after all!

CHECK OUT THESE AMSTERDAM TOURS:

Banksy, of course, is that curious, anonymous British artist known mostly for his street art and graffiti, which is often anarchist and politically-themed. Some people label him a vandal, while others call him a genius. (He’s probably both.) He started producing public art in the early ’90s, and to this day, his identity has never been revealed – even after a documentary film was made about him! 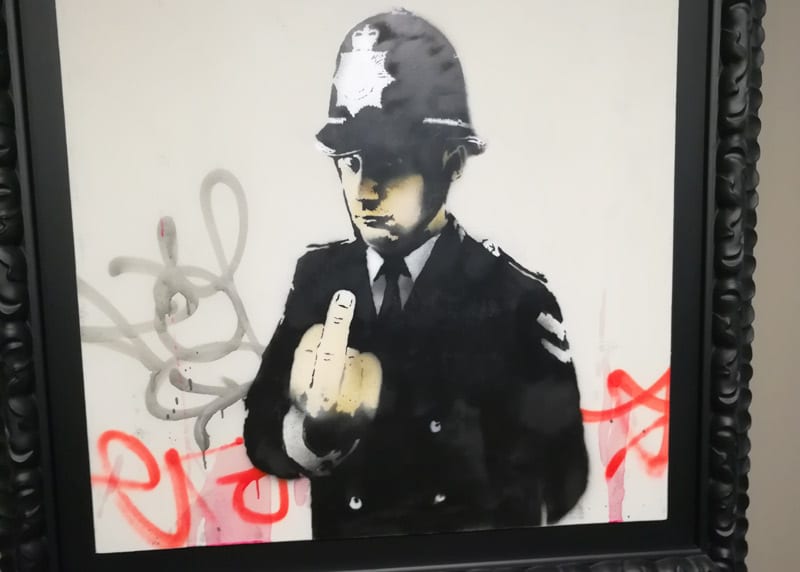 Banksy did not authorize this collection at the Moco, by the way. He’s way too cool for that. And how would anybody even get in touch with him to seek his consent, anyway?

A lot of people don’t even realize that Banksy has created sculptures in addition to his street art. The Moco gathered as many of the physical objects created by Banksy as it could for this exhibit.

Mickey Snake is one of the centerpieces of this exhibition. It reveals Banksy’s anti-consumerist attitude by taking one of the most beloved pop culture creations and burying him inside the stomach of a hungry reptile.

There’s also Beanfield, a large canvas that is one of the artist’s most famous works and which hasn’t been on display since 2009. There’s Flower Thrower, his piece in which a protester hurls a bouquet of flowers instead of a projectile. There’s Kate Moss, a portrait of the model done in Warhol-style.

Di-Faced Tenner is a ten-pound bill with Lady Diana’s face on it instead of the queen. Hundreds of these fake bills were dropped into festival crowds in 2004. They later caused confusion when oblivious people tried to use them as real cash! 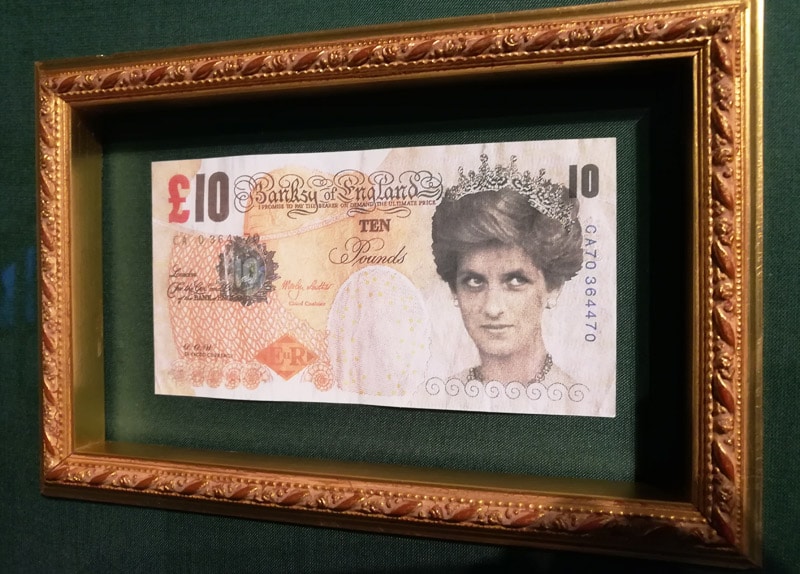 The controversial Christ With Shopping Bags is on display as well. This piece makes the point that too many folks have turned Christmas into a season of shopping, instead of remembering its original spiritual purpose. 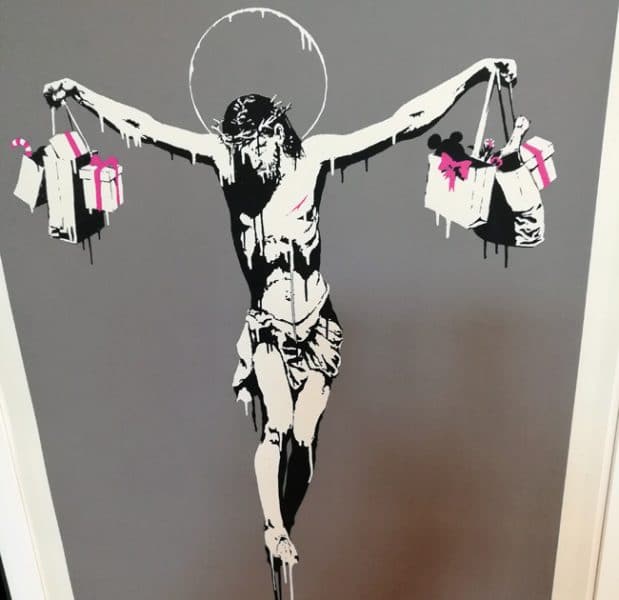 Girl With Balloon, Rude Copper, Double Monkey, and Che Guevara are among the other well-known works in the Moco’s Banksy exhibit. It’s probably the best collection of his art you can find anywhere. You can’t pretend to be cool unless you’re familiar with his body of work. So go and check it out!

Other Instagram-Worthy Exhibits on Display 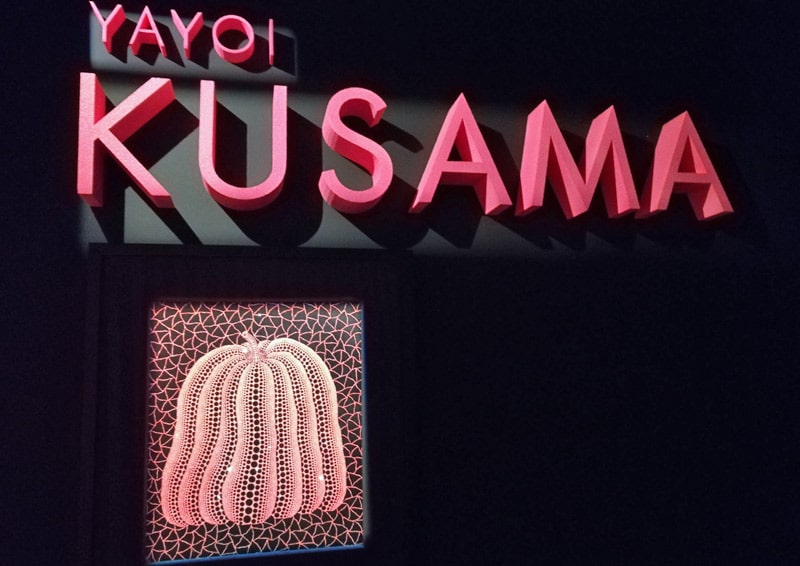 The Moco might be a boutique museum in an old building that was once a townhouse, but they pack a lot into that space. The Yayoi Kusama room is another popular area. Look for her works called Night of Stars and Pumpkin.

Probably the most common spot for Instagram photos at the Moco Museum is this stripey room where you can sit or stand in the corner. Attention influencers, use those stripes and geometric angles to your advantage!

I’m a massive Andy Warhol fan. I’ve visited his grave in Pittsburgh and his incredible museum there. But I had never seen this particular piece, a screenprint of Mick Jagger from 1975. I love how it blends photography with drawing, with just a touch of orange to brighten it up. 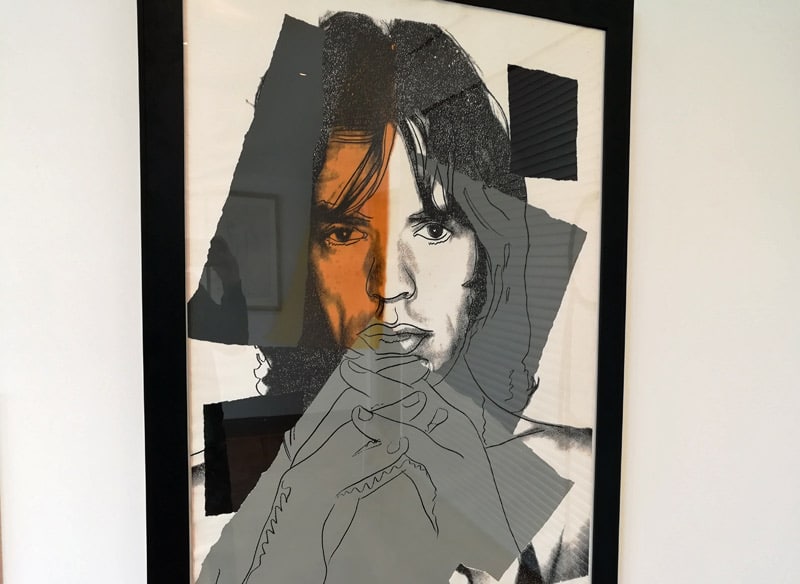 Warhol’s protege Jean-Michel Basquiat is represented here. So is Salvador Dali, in the form of a pencil drawing on paper called Les trois graces. Jeff Koons has pieces on display in the “Moco Masters” permanent exhibit, along with Keith Haring, who created those colorful pieces with squiggly lines that were big in the ’80s. 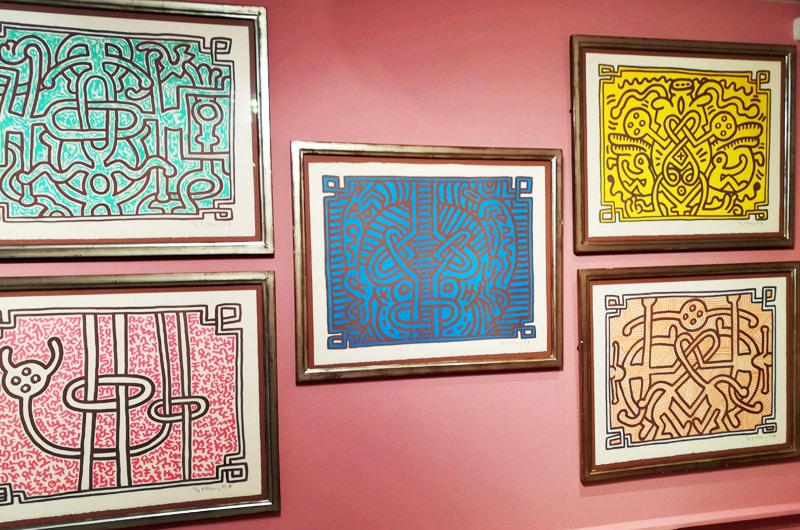 Some of the freakiest items in the museum were pieces from Daniel Arsham’s Elastic Walls series. These pieces, such as Falling Clock, make it look as though the walls are actually malleable. 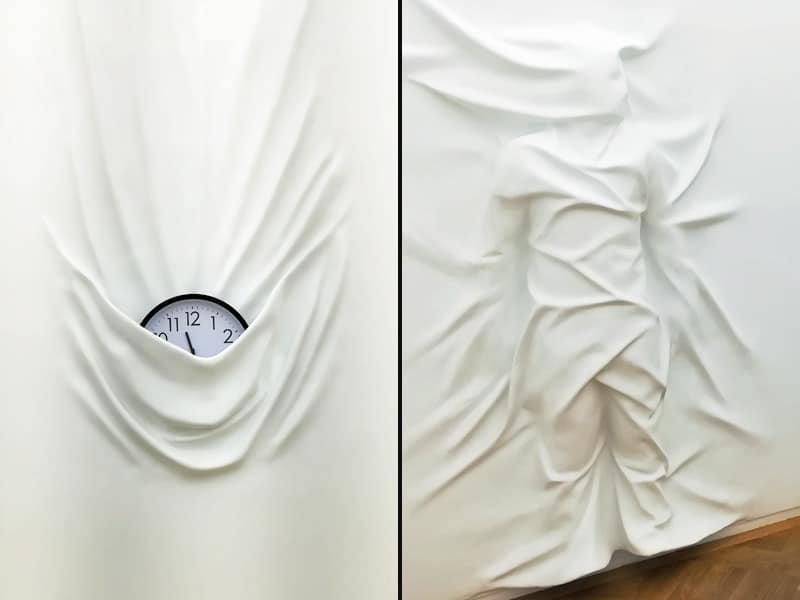 When you leave, don’t forget to head out to the garden to check out even more quirky and unusual modern art. Did y’all know that the Red gummy bear got arrested? I hope Orange and Yellow don’t get too mad at him. This sculpture was created by Brooklyn artist WhIsBe.

As of this writing, the Moco Museum is open from 9 am to 7 pm most days of the week. It stays open until 8 pm on Friday and Saturday.

Tickets at the door are 15.50 Euros ($17.50 USD.) However, for that same price, you can buy “Skip the Line” tickets in advance via our partners at Get Your Guide. When you arrive, there will be two lines: one for people who’ve already purchased tickets, and one for people who haven’t. Buy them ahead of time to avoid wasting time in line.

For a better deal, combine Moco Museum admission with a one-hour cruise on the canals of Amsterdam! You can score a package deal for both for around $30 USD total. Click to see ticket prices for the Moco and cruise combo.

Or, for the best deal, pick up the iAmsterdam city card. For one upfront price, you’ll get admission to more than 70 museums and attractions, including the Moco, the Van Gogh Museum, the Tulip Museum, the Heineken Experience, Rijksmuseum, and Rembrandt House. It’s a great deal for tourists because it also includes a free day of bike rental and free access to all buses and subway trains!

Moco Museum is located in Museum Square, next to the Van Gogh Museum. Use your bike rental and follow the bike paths to get here. Or take the #2, #5, or #12 tram. 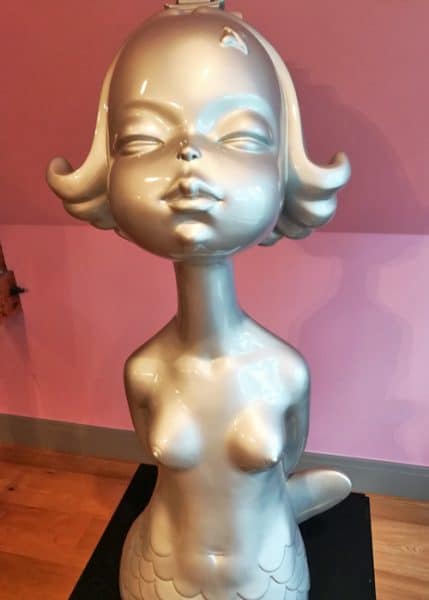 I highly recommend visiting the Moco Museum, even if you’ve only got one day in Amsterdam!

Would you visit Moco Museum to check out the Banksy exhibit? 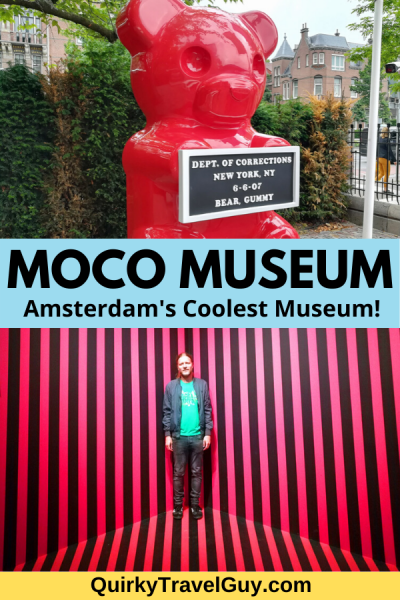 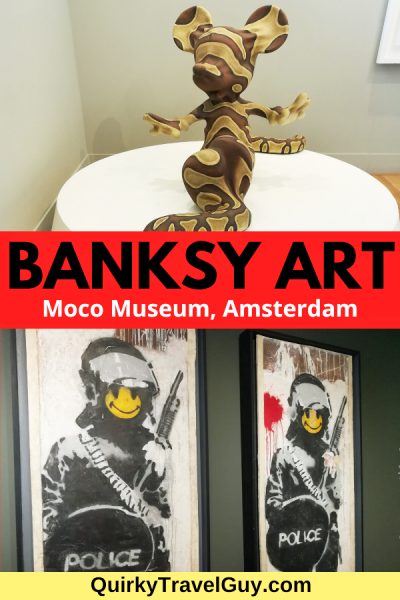