If you head to Mt. Rushmore or the Black Hills or Badlands National Park, you’re bound to see tons of signs for Wall Drug, which bills itself as the world’s largest drug store. It has become a tourist attraction in its own right. Especially after its “Where the heck is Wall Drug?” bumper stickers started becoming popular.

Yet many people say it’s overrated. Is Wall Drug worth visiting? Your intrepid quirky travel guy hit up Wall Drug in the town of Wall, South Dakota to find out the truth.

It turns out the place is kinda ridiculous. Wall Drug is not a drug store at all, but a series of small, unrelated stores under one roof. A glorified shopping mall, basically.

At 76,000 square feet, the place is big enough to spend an hour or two. The stores are all part of the same company, meaning that technically, they could be considered one store.

The history of Wall Drug is interesting. Nebraska native and pharmacist Ted Hustead bought the place back in 1931. He specifically chose Wall, South Dakota because he wanted a small town that had a Catholic church so he and his family could attend daily mass.

At the time, Wall had an official population of 326 people. (In 2019, the population is still only at 766 residents.) Apparently, business for Ted was slow until his wife had a brilliant idea. She suggested they start offering free ice water to travelers. This was a big luxury back in the day for those visiting Rushmore in the summer. Wouldn’t you know it… business took off!

Wall Drug grew into a cowboy-themed complex, advertised by loads of billboards on I-90, stretching all the way from Minnesota to Montana. Even now, they still offer free water, as well as 5 cent coffee. These cheap deals keep thousands of tourists streaming in through the door every summer.

‘Where the heck is Wall Drug?’ Marketing and Promotion

The place still gets by on its billboards, and word of mouth, both online and in person. And oh yeah, there’s also an 80-foot brontosaurus outside the place. You can’t miss it.

Over the years, Wall Drug billboards and signs have been posted all around the world. There was even a noteworthy sign in Amsterdam, of all places, which read, “5,397 miles to Wall Drug!”

One of the drugstore’s most popular souvenirs is a bumper sticker that reads “Where the heck is Wall Drug?” The black and red sticker is often seen on cars from frequent road trippers who want to brag that they made a pilgrimage to the infamous mall.

Seriously though… where the heck is Wall Drug? 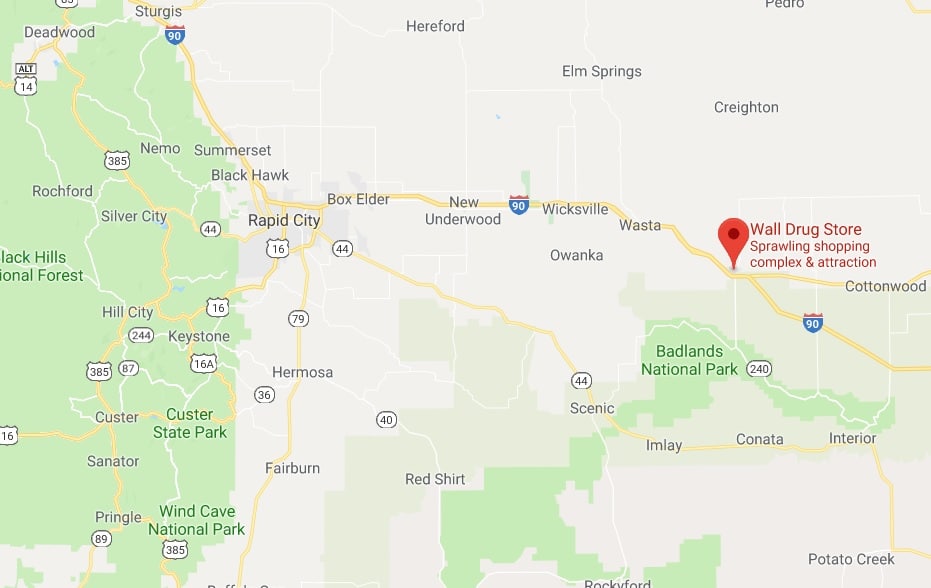 It’s in the western part of South Dakota just a short ride from Badlands National Park. It’s right off Interstate 90, which runs all the way from Boston to Seattle. Ideal for a cross-country road trip!

Currently, Wall Drug has every kind of small store you can imagine. There’s a leather goods store. A soap store. Convenience stores. A bookstore. Even a chapel. 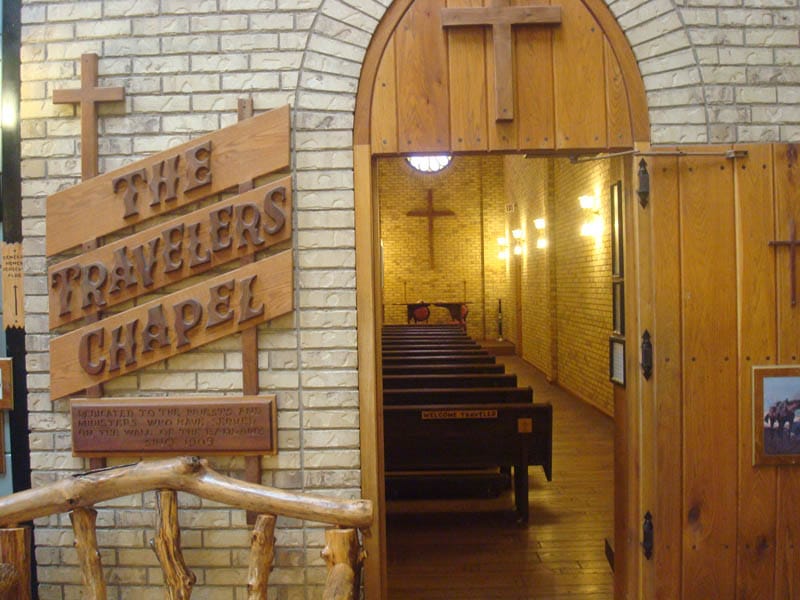 The official website has an interactive map showing every store inside Wall Drug. You’ll find loads and loads of places to buy art, gifts, and kooky souvenirs.

There’s a 500-seat restaurant known for its donuts, pie, and ice cream. There’s a “Backyard” area featuring a splash park with water fountains kids can play in and a giant jackalope statue they can sit on.

We spent a few minutes in some of the stores before losing interest. We managed to kill time playing video games. Of course, this being South Dakota, the game was a hunting contest in which I had to shoot bighorn sheep. I may love these sheep, but I will take them down in a heartbeat in order to win a game! 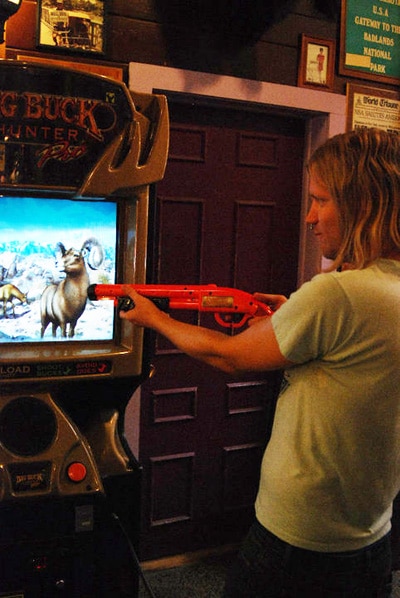 Is Wall Drug Worth Visiting? The Verdict

So that’s about it for Wall Drug. Despite the warnings that Wall Drug was overrated, I went anyway, just to experience it for myself.

Wall Drug strikes me as a tourist trap. But I admit the place ranks high on the meter for kitsch, quirk, and weird Americana roadside realness. So if that’s your thing, go ahead and stop by. Get your free ice water and soak in the silly atmosphere.

Would I recommend driving out of your way to get here? Absolutely not. But if you’re in the area visiting other South Dakota attractions and you have plenty of time to kill… and if you don’t take yourself or your travels too seriously… then you might as well make a pit stop here.

Is Wall Drug worth visiting? Leave a comment with your opinion if you’ve been there!

6 thoughts on “Where The Heck Is Wall Drug, And Is The Famous South Dakota Tourist Attraction Worth Visiting?”