When I finally made it to South Dakota (state #47 in my travels!), one of the sites I was most excited to see was the Crazy Horse monument.

Why was I so excited? Well, it’s kind of silly. Years ago in my former job, I worked on educational software. One of the games I tested was a video designed to teach kids about the Crazy Horse monument. I had to watch those videos thousands of times, so they became burned in my brain. Going to actually visit Crazy Horse in person became an odd thrill.

This monument has been in the works for decades, yet it doesn’t look as if much progress has been made. Many tourists are wondering why it’s taking so long.

Read on for details on what you’ll see at the Crazy Horse monument in South Dakota. And we’ll try to answer the lingering question: Will Crazy Horse ever be finished?

PRO TIP: If you want to maximize your time and avoid the driving, consider taking a Black Hills Guided Tour. For a reasonable price, this tour transports guests from Rapid City to Crazy Horse, Mount Rushmore, and Custer State Park all in one day!

What is the Crazy Horse Memorial?

Crazy Horse was a famous Lakota warrior who resisted U.S. efforts to take possession of Native American lands, notably at the Battle of the Little Bighorn in 1876. He wanted to preserve the traditional Lakota way of life, and fought to do so until his passing in 1877.

In a nutshell, the Crazy Horse Memorial is a monument in South Dakota that was started decades ago and is still many, many decades away from being completed. It will depict Crazy Horse riding on (what else?) a horse.

When (if?) it’s completed, it will be a ridiculous ten times larger than Mount Rushmore: 563 feet high, vs. the Rushmore heads’ 60 feet height. It may actually be the largest sculpture in the world.

Here’s how the actual site looks now, as compared to a miniature-size model in the foreground that shows how it will look when the work is done: 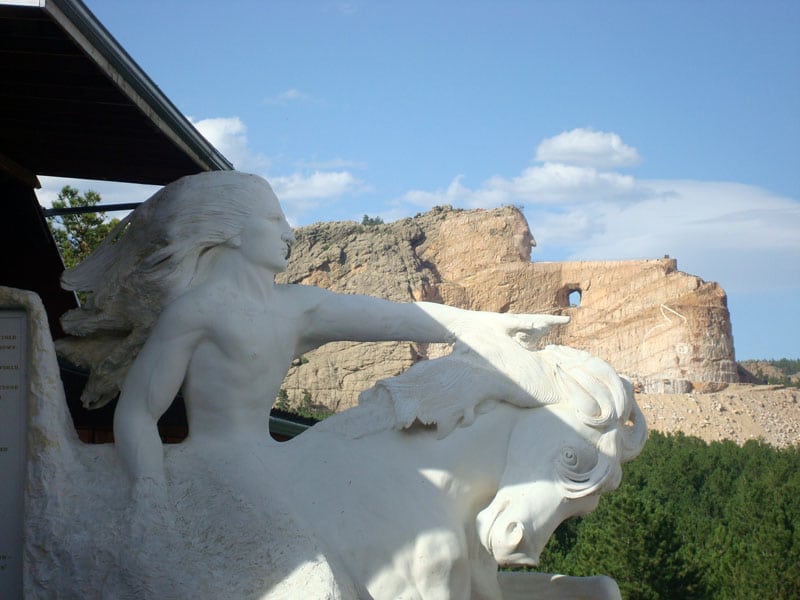 There Once Was a Man With a Plan

The project was initiated in 1939 by Lakota elders, who wanted to create a giant rock sculpture to honor Crazy Horse. They hired Polish sculptor Korczak Kiolkowski, who began blasting away in the Black Hills of South Dakota, often drilling by hand.

Korczak worked on the project his entire life. Considering that he was working either alone or with a very small staff, the progress Korczak made before he passed away in 1982 was admirable.

But if we’re being honest, considering how far the sculpture has to go, Korczak really didn’t accomplish as much as he would’ve liked.

He repeatedly turned down millions in federal funding that could’ve sped up the project, saying that it would compromise the site. His family continues the work, with no end in sight.

Korczak’s widow Ruth took over the lead on the project and made a strategic decision to focus on completing Crazy Horse’s face first, rather than the horse, as had been originally planned. This was a smart idea, because she felt that having the face done would bring in more tourists.

Ruth passed away in 2014, and the Korczak children are leading the work. The memorial is now slated to be part of a satellite campus for the University of South Dakota.

They sure have some ambitious ideas for the Crazy Horse monument; now it’s just a matter of making them happen.

When Will the Crazy Horse Monument Be Finished?

The face of Crazy Horse is now visible, and you can make out the beginnings of the horse. But it’s obvious this thing isn’t anywhere close to being finished.

You can visit the site in South Dakota to see the progress. If you’re lucky, you may even catch the workers blasting away the rock. Visitors are shown a video with black and white clips of Korczak from the old days.

It’s a fascinating video that clearly shows the amazing determination of Korczak, who was willing to work for decades on a project he knew he’d never see to the end.

You can touch pieces of rock that have been blasted away from the side of the mountain. And for a small donation – whatever you’re willing to put in the box – you’re allowed to take a piece of rock home with you.

All in all, I dare say the Crazy Horse Memorial is a bit more interesting and educational than Mount Rushmore, even if it doesn’t hold the same level of iconic American prestige as the presidential heads.

When will the Crazy Horse mountain be finished? Nobody knows just yet. The completion date is up in the air, and no estimate has been given. It still looks decades away from being completed.

As time has gone on, some folks have expressed concern over the lack of progress on the Crazy Horse Memorial, hinting that the family is dragging their feet while at the same time enjoying the profits from tourists who visit.

Seth Big Crow, a distant relative of Crazy Horse, has reportedly said, “When you start making money rather than to try to complete the project, that’s when, to me, it’s going off in the wrong direction.”

Another criticism that has been leveled is that Crazy Horse was known as a humble man, and he may not have been thrilled by the idea of being immortalized in such fashion.

There are numerous strong viewpoints on the issue of Crazy Horse and his monument. You can read many of them right here if you scroll down to the comments! 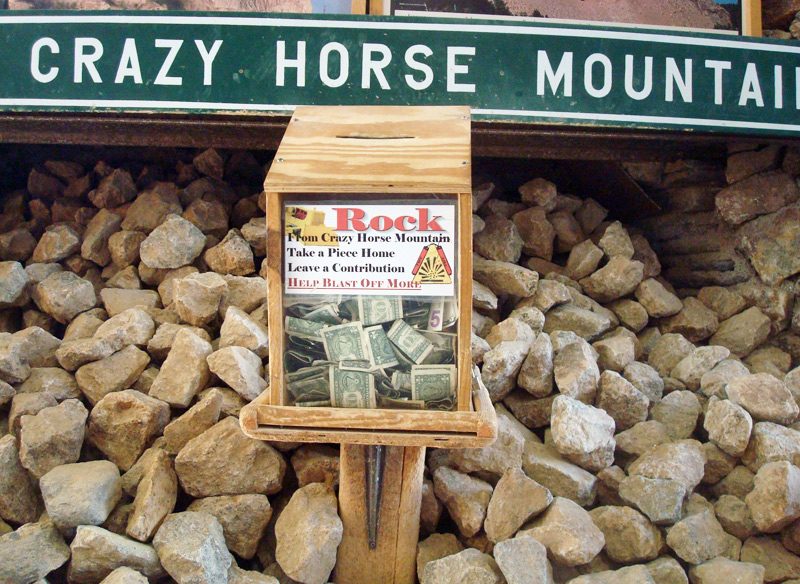 Specifics for a visit to Crazy Horse

The memorial is quite expensive to visit. As of early 2022, the memorial is open 365 days a year. Admission price is a steep $30 per car for vehicles with three or more people. Otherwise, the cost is $12 per person if arriving by vehicle. It’s $7 if you arrive by bicycle, motorcycle, or on foot.

When you consider that thousands of tourists visit the monument each year, that’s millions of dollars that are going into the coffers of the folks running this place.

Visiting hours vary by season and by month. During the summer season (late May to late September), the Welcome Center opens at 8 am and closes a half hour after the laser light show ends. 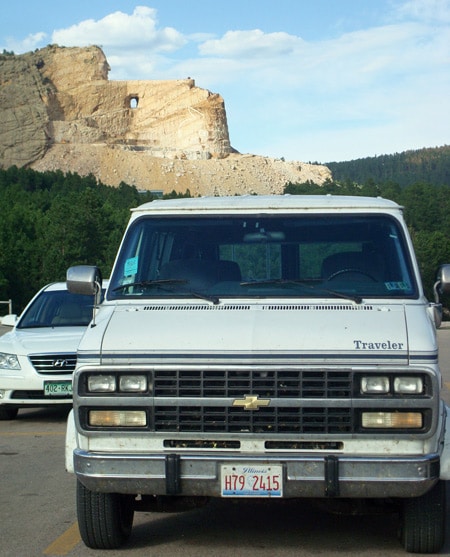 Expect large crowds. Despite its flaws, the Crazy Horse monument is still a very popular attraction, and despite rising costs, people are still taking a lot of summer road trips. So you’ll have lots of company here!

During winter months, when far fewer people visit, the Welcome Center may close as early as 4 pm, and there’s no laser show at all.

That’s right, there’s a nightly Laser Light Show here in the summer! The show pays tribute to the contributions of Native Americans in society. It uses lasers projected against the mountain. The laser and music show takes place during the summer between 7:30 and 10 pm, depending on when sunset is.

Another attraction at the Crazy Horse Memorial site is the “Bus to Base.” You can hop aboard a bus and take a ride up to the base of the mountain, for an ultra-close view of the warrior’s emerging face in the rock.

Here’s a news video with some additional details about the Crazy Horse monument:

Where to Stay: Hotels Near Crazy Horse

This part of South Dakota has a moderate amount of hotels, and they can sell out during peak season, so planning out your lodging in advance will be key. I recommend staying in Custer, which is only five miles away from the Crazy Horse monument.

The Chalet Motel is an affordable (less than $100/night) option, while the Bavarian Inn is a nice upscale property. Check out the map from our partners at Booking to browse all the available hotels in the region.

South Dakota Tours & Excursions from Our Partners at Viator

If you’re interested in a group tour or outdoor activity in South Dakota, check out this list from our partners at Viator. It includes a convertible vehicle tour of the Black Hills & Mount Rushmore, scooter rentals in the Black Hills, and private bicycle tours in the area.

Wall Drug: Not Worth the Trip

Would you visit the Crazy Horse monument even though it’s not finished yet?

55 thoughts on “Crazy Horse: The Monument That May Never Be Finished”