It’s finally time to wrap up our focus on South Dakota for this month. Mt. Rushmore, the Crazy Horse monument and the bighorn sheep in Badlands National Park were all interesting.

But perhaps the quirkiest thing I discovered in South Dakota was the collection of “begging burros” and bison in Custer State Park, a wildlife reserve in the Black Hills of South Dakota. 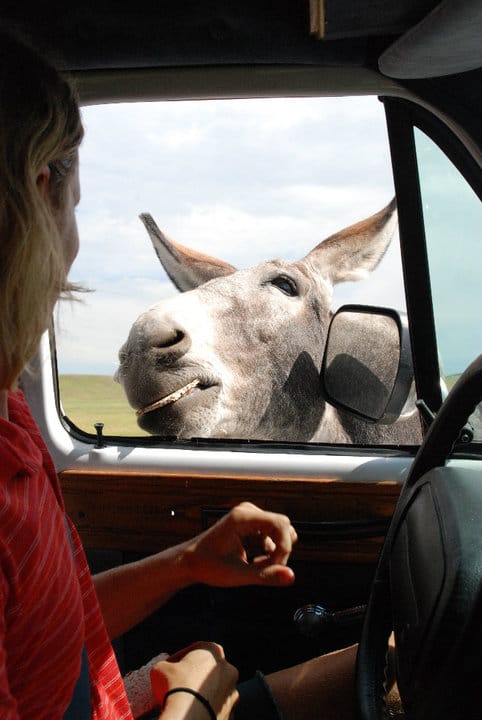 The burros are wild donkeys that live in a small section of Custer State Park along the road. They are called “begging burros” because they’ve become famous for approaching vehicles and expecting food. Many visitors bring crackers to feed them.

The issue of feeding wild animals usually gives me mixed feelings, but when I discovered that this practice isn’t frowned upon by park officials, I purchased a box of crackers and headed off to find the burros.

It wasn’t hard to find them! We saw about four or five, and they were very aggressive. They go right to your door, stick their face inside your window, and eat crackers or fruit out of your hand.

They will sometimes block traffic if their demands aren’t being sufficiently met. Now that’s gangsta!

After a few minutes of this, it was getting old, and more vehicles had arrived eager to feed the animals, so we moved on. If you plan to visit, remember that it’s fine to feed the burros since this practice has been going on for years.

The rangers even acknowledge that it’s acceptable. Just don’t feed any of the other wildlife in the park!

What do burros eat? Besides the crackers as previously mentioned, some tourists bring healthier snacks like apples and carrots.

They’re not exactly the pickiest of animals when it comes to their diet. The burro population here is small, usually numbering less than 10.

For bison sightings in Custer, the Peter Norbeck Visitor Center is the place to be. Make it the first stop on your road trip!

Around 1,500 bison live in Custer State Park, and hundreds of them are gathered near the visitor center, causing frequent traffic jams and giving tourists an up-close look at them. Just don’t get too close! 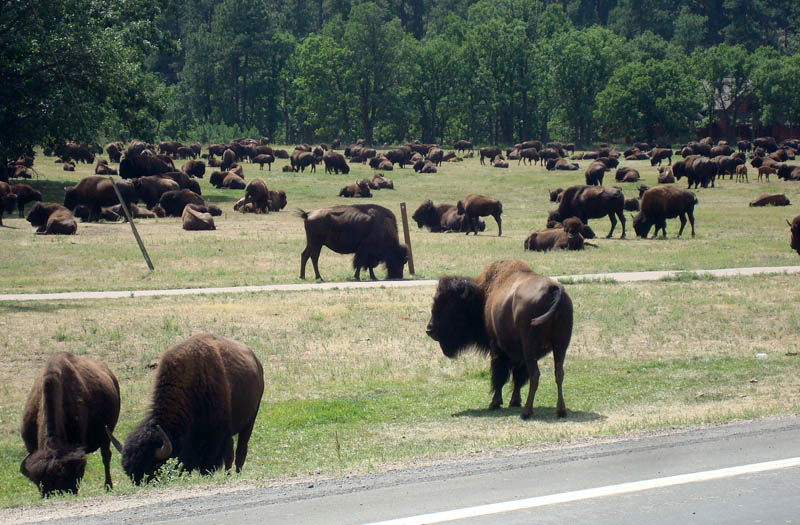 One other Custer State Park / Black Hills wildlife tip – we heard that there are also mountain goats in the area. But when we asked the ranger about them, he said their population was stricken with a serious disease that was killing off many of them.

Note that my trip was several years ago – hopefully the goats have become healthy again since then.

Update: More mountain goats were imported from Utah to diversify the bloodlines, and that seems to have helped the goats rebound.

Would you feed the begging burros of Custer State Park? Leave a comment and let us know!

RELATED READING: Where the Heck is Wall Drug: Is It Worth Visiting the Famous South Dakota Tourist Attraction?