The moment I noticed the wonderfully ridiculous half-chicken, half-donut logo for a place called Mike’s Donuts & Chicken, I felt at home. This was the first of many offbeat and fun things to do in Kenosha, Wisconsin I would encounter during my visit. 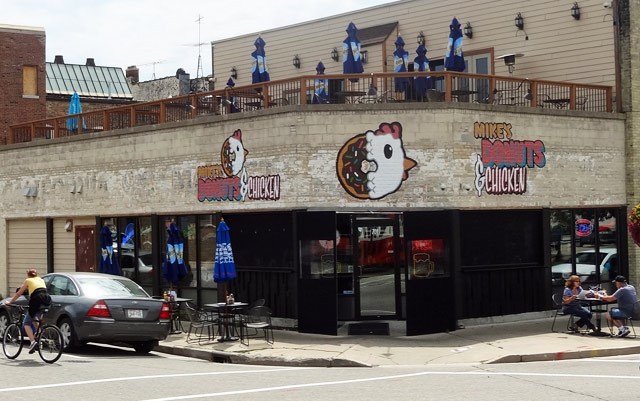 I have yet to find a city that doesn’t have some level of quirky fun, and immediately I knew Kenosha, Wisconsin wouldn’t let me down. Not with its old-timey streetcars, dinosaur bone museum, birth house of Orson Welles, free shot of tequila with breakfast at the diner, and plush Ulysses S. Grant doll at the Civil War Museum gift shop. 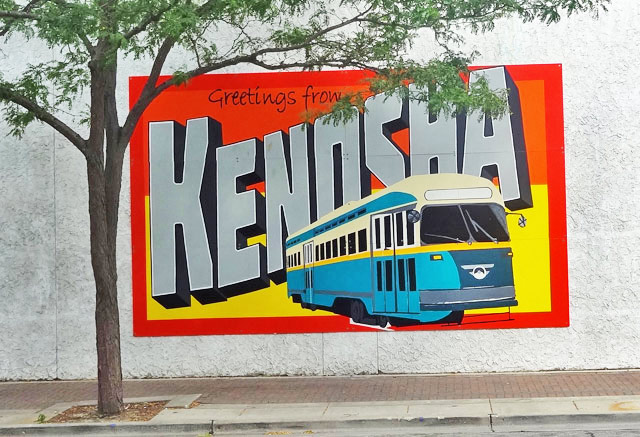 And of course, there was cheese. Lots of cheese and cheese-related products. Cheese koozies, cheese-shaped napkins, cheese-colored hand towels with holes in them.

Kenosha is only a couple hours from Chicago, making it a cool day trip option. Check out the most fun and interesting sights I encountered while visiting Kenosha!

The city of 99,000 sits on Lake Michigan between Milwaukee and Chicago, making it a convenient day trip for millions of people. If you’re into quirky and unique experiences like me, you’ll want to start by riding Kenosha’s vintage streetcars, which were revived in 2000, decades after they last traversed the streets. 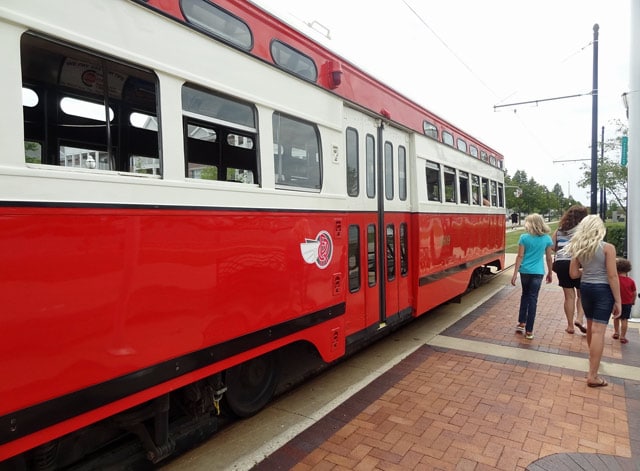 The city has several different types of train cars, all modeled after old streetcar designs from other cities. The Cincinnati car is bright yellow, while Pittsburgh is orange. The track runs for two miles from the Metra train station across town to the lakefront. Hanging out on the lakefront is another activity to consider.

The Civil War Museum (opened in 2008) covers the important conflict in great detail from the Midwestern perspective. Anyone interested in that part of our history should check it out. If you’re looking for something offbeat, head to the gift shop and find the plush Civil War figures – Abe Lincoln, Robert E. Lee, and Ulysses S. Grant. Who doesn’t want a stuffed Abe doll? 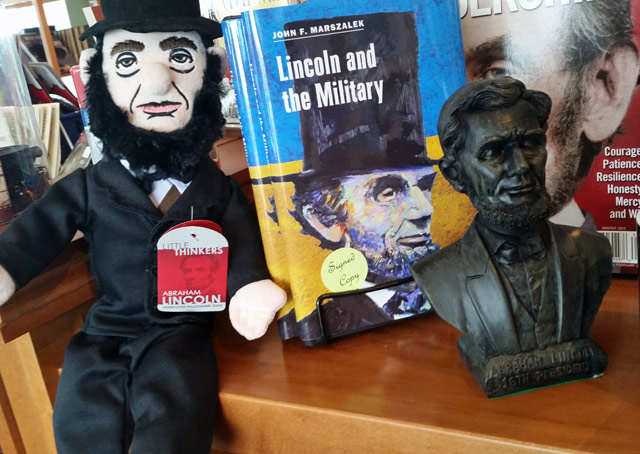 Another attraction with a ton of history is the Dinosaur Discovery Museum. This facility is small, but it has some cool sights, like this femur bone of a Thescelosaurus, a medium-sized plant-eating dinosaur. It’s always mind-blowing to see bones from millions of years ago.

READ NEXT
Visiting the Dole Plantation in Hawaii: Hours, Prices, and Tour Photos! 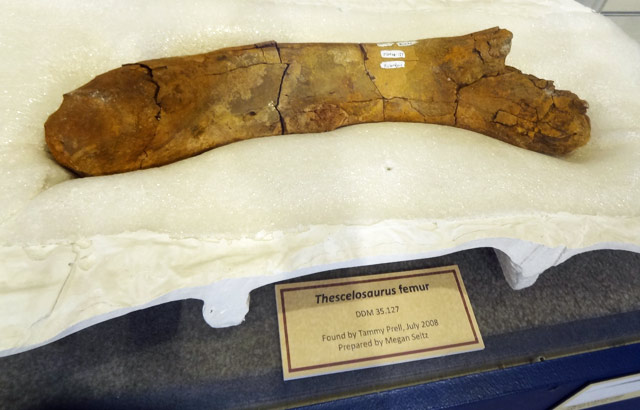 A more recent historic site is the birthplace of Orson Welles. The famous actor and film director (Citizen Kane!) was born in 1915 in a duplex that still stands on 7th Avenue. There’s a small marker noting the historical significance of the property. 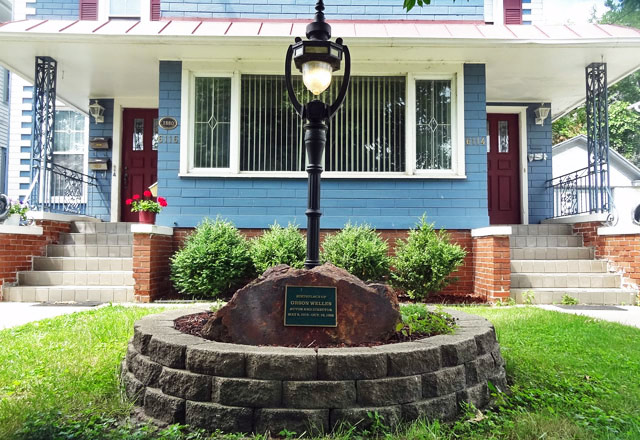 Visiting the birthplace of Orson Welles is one of the interesting things to do in Kenosha. 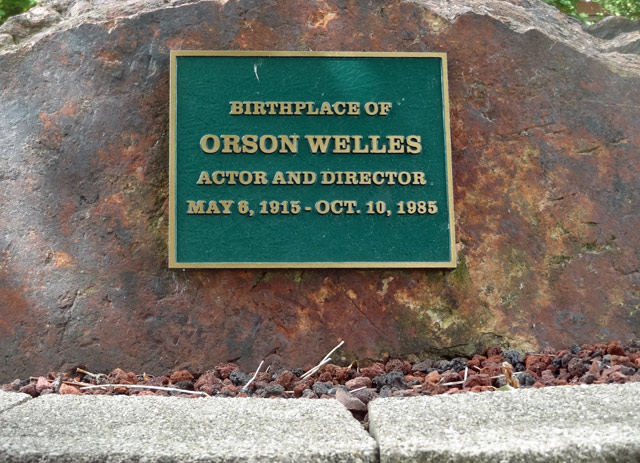 Frank’s Diner is the iconic dive where you go for local character and huge servings while seated in a lunch car diner. Established in 1926, Frank’s is the kind of place that hangs a sign that reads, “Shut up and eat.” They sell t-shirts that say, “Order what you want, eat what you get.” They have a deep-fried twinkie on the chalkboard of daily specials. 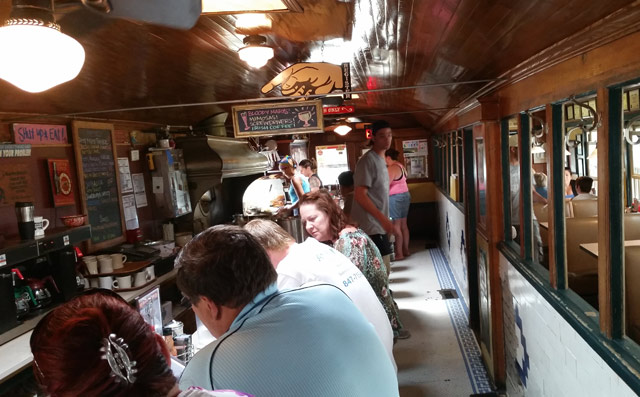 It’s also the kind of place that serves free tequila shots with morning brunch to those sitting at the counter. I had no idea that was coming, but at 11 am the server walked around offering shots in mini plastic cups. I’ve never had tequila with my omelette before, but I can’t say it was a bad experience.

I’m an ice cream junkie, so I had to stop by Scoops, which had fun flavors like Zoreo (chocolate fudge with marshmallows & Oreos), which was unspeakably delicious. I was also amused by the “Exhausted Parent” flavor (bourbon-spiked espresso ice cream.) 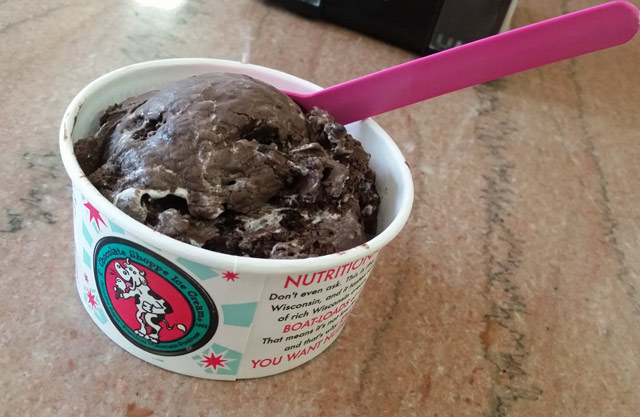 And then there’s Mike’s Donuts & Chicken. Since I had already stuffed myself at previous stops during the day, chicken was out of the question, but there’s always room for dessert. I went with a Mint Oreo gourmet donut.

After that, it was time to grab a drink at Public Craft, a brewery that has the vibe of a coffee shop, with local art on the walls, live band performances, Chet Atkins records playing on the turntable, and foosball, shuffleboard, and giant Jenga games. It’s such a comfortable place to hang out. The beer isn’t bad either. 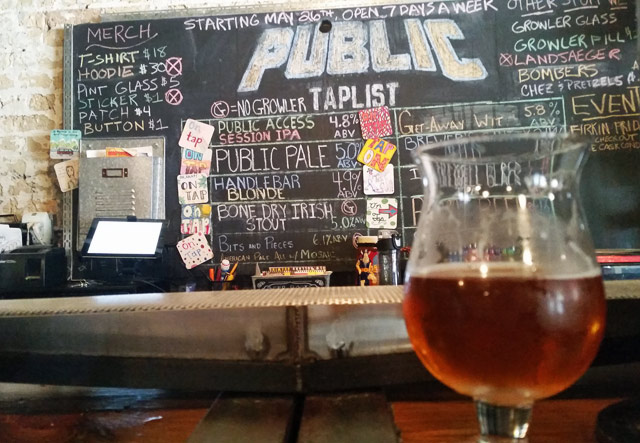 Other Offbeat Things To Do in Kenosha, Wisconsin

There’s a sports store in Kenosha called Something Different, which is an understatement to say the least. This shop has the biggest supply of sports products I’ve ever seen. It’s amusing how many different items they have in stock.

Here you can find plates and mugs with the logo of your favorite football team. Plus Santa Claus ornaments, wall signs, even boxes of tissue and ice scrapers! 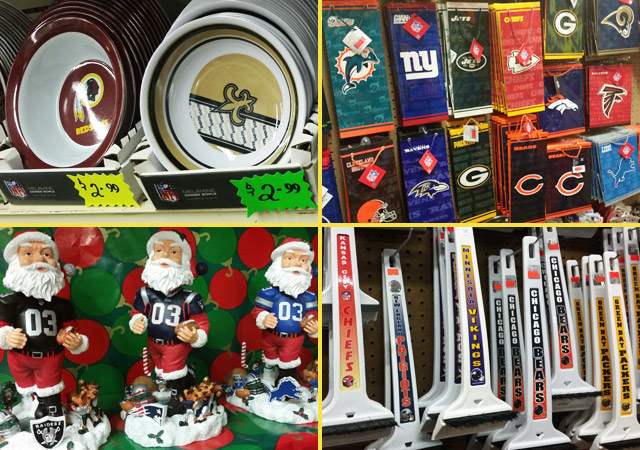 My favorite unexpected Kenosha discovery was Mike Bjorn’s Fine Clothing. If you’ve ever wanted a lime green prom tux or polka dot socks, this is your place. They have “normal” clothes too, but the flashy stuff is what catches my attention. 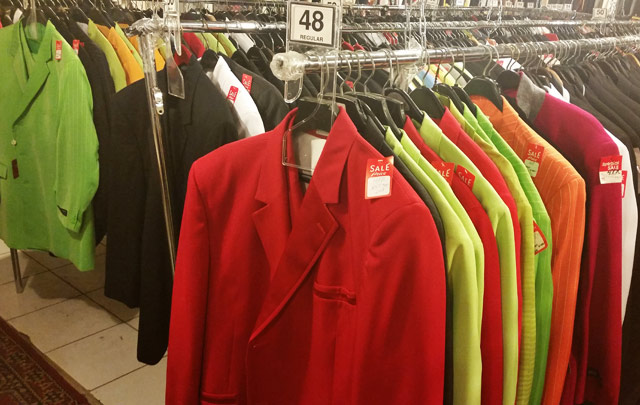 Finally, since we’re in Wisconsin, we have to talk about cheese. Spots like Mars Cheese Castle and local delis and gift shops all have numerous cheese-related products. Besides selling dozens of different kinds of cheese and cheese curds, they have cheese-shaped napkins, cheese koozies, and hand towels with holes designed to look like cheese. Cool! 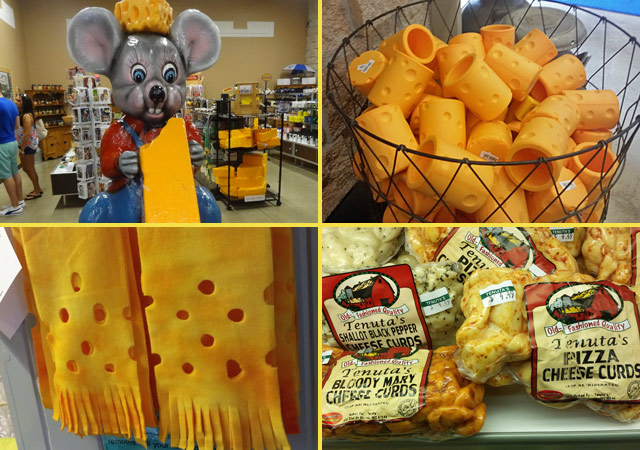 We haven’t even mentioned one of the quirkiest things to do in Kenosha, the Jelly Belly Warehouse Tour, which is actually 7 miles away in Pleasant Prairie, Wisconsin.

And for more offbeat fun in the area, check out the House on the Rock in Spring Green, or our list of things to do in Madison.

Which of these quirky Kenosha places would you most like to visit?

My visit to Kenosha was made possible by Visit Kenosha.