People often ask me to name the coolest places I’ve ever been. After visiting Hawaii’s Big Island, I have a new addition to the list: Hovering a couple hundred feet over an active volcano with lava swirling about! 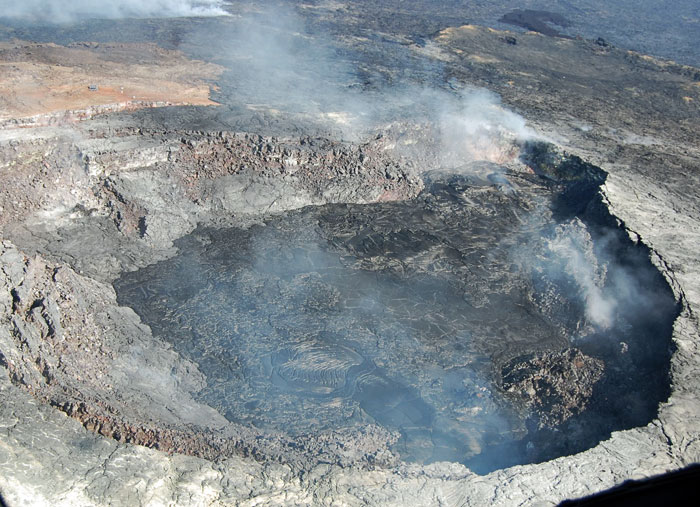 Yes, there are still active volcanoes on Hawaii, especially on Hawaii island itself (otherwise known as the Big Island). They don’t shoot lava way into the air like you see in the movies. Instead, there are craters and sections of earth where the lava swirls around and sometimes comes to the surface.

Taking a Big Island volcano helicopter tour is a perfect way to see not only active lava flows, but also to see incredible aerial views of Hawaii itself. You can get unique views of the small towns, forests, and mountains from above. 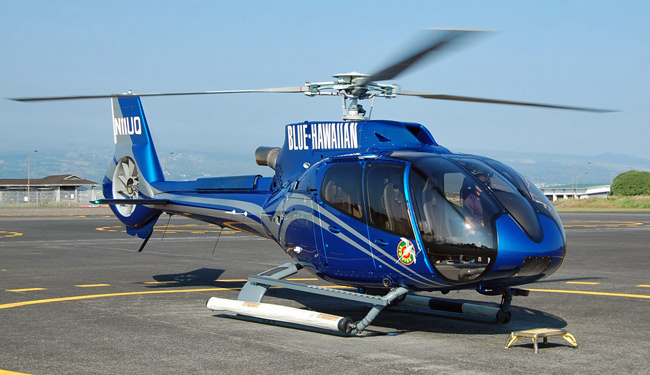 You’ll find lots of Big Island helicopter companies willing to take you into the air to see the volcanic activity. I went with Blue Hawaiian, because they seemed to be the most reputable and reliable. A couple of other companies are slightly cheaper, but you don’t want to take shortcuts on an excursion like this when your safety is on the line.

Note that I paid for my own flight. There were no freebies involved. Based on my experience, I am comfortable recommending them, but other companies are reputable as well; see the end of this article for a comparison of Hawaii helicopter companies.

The active volcanoes are sometimes (but not always) located within the boundary of Hawaii Volcanoes National Park. You should definitely explore that park by land as well as from the air!

The Experience of a Boarding a Big Island Volcano Helicopter Tour

We boarded our flight at the Hilo airport. You can also book copter tours that leave from the Waikoloa Heliport in Waikoloa Village on the western side of the island.

Big Island volcano helicopter tour companies offer various kinds of tours. Most range between $350-650 per person, depending on the length of the tour. Some fly directly to the volcanoes and the lava flows, while others explore more of the rest of the island.

Before boarding, there’s a safety video, and guests are seated according to weight to balance out the copter. This flight included just the pilot, myself and my travel friend, and two other tourists.

Guests are warned not to wear white, since light colors can reflect in the windows and ruin everyone’s photographs. So with our dark clothes, we headed over to the copter and strapped ourselves in.

Most tours are in traditional helicopters with doors. But there are some “doors-off” copter tours for those who aren’t afraid of heights! Here’s a doors-off copter tour that leaves from Hilo.

Headsets are required to talk with the pilot and passengers since copters are loud. Once you put on the headset, you really feel like cool things are about to happen!

And they did. We shot up into the air. The ride was smooth, never scary, as we headed down the east coast of the island. We immediately saw smoke drifting up into the air from the lava-filled vents in the area. Behold the sulfur dioxide! 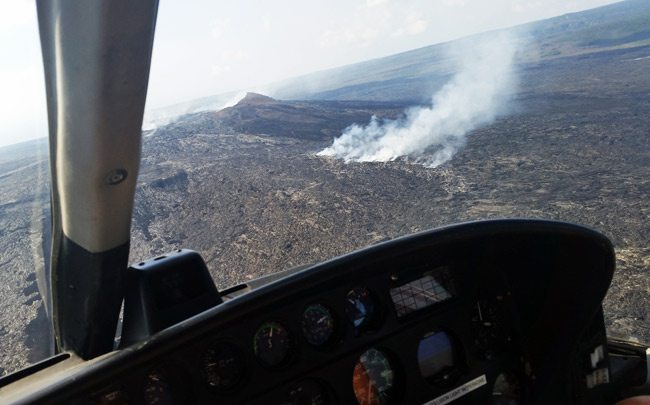 Seeing the smoke drifting away was a cool sight. Just imagine how hot that steam must be coming directly from these vents! 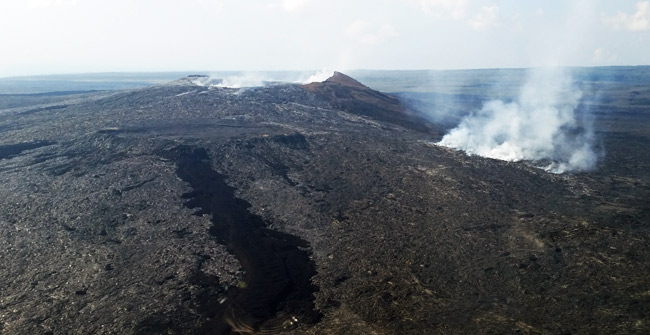 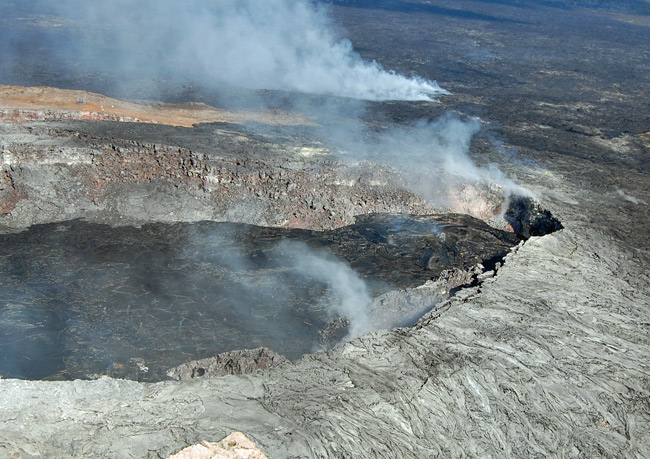 One of the interesting sights we quickly noticed was the texture of the hardened lava on the surface. It contained all these weird designs and shapes. It looked like a giant field of dried tar. 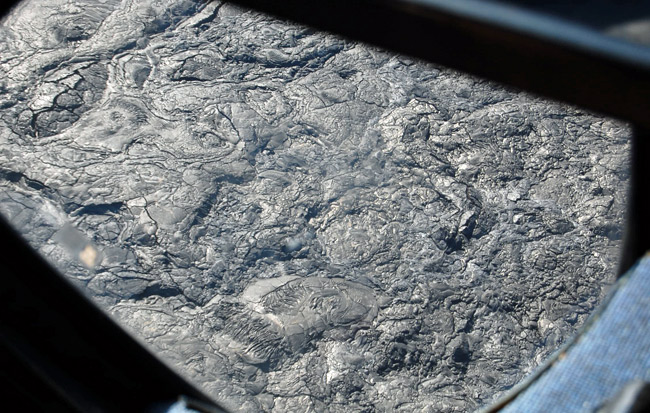 Much of the island surface is composed simply of hardened lava, but there are plenty of trees and forest sections as well. Often these trees are destroyed during heavy lava flows.

We got to see this in action up close when the pilot approached an area where lava is currently coming to the surface along the tree line. From a distance, we spotted the smoke from burning trees. 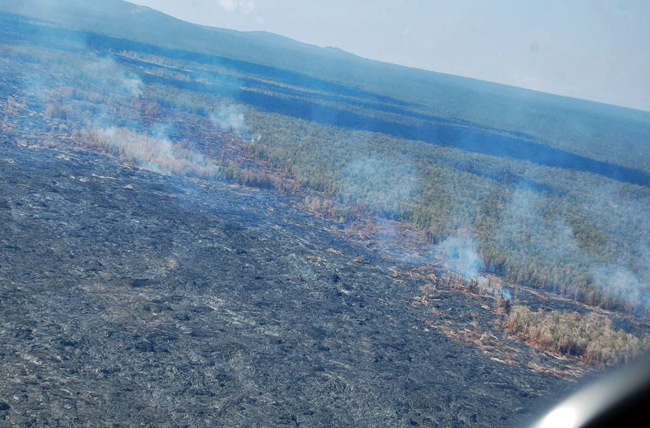 And then we flew in for a closer look and could actually see the lava seeping up through the ground setting the trees ablaze. Cool!

The flows are the result of the continuous eruption of Kilauea, which has been erupting steadily for more than 30 years. We saw several examples where sections of trees had been spared during previous lava flows. That results in these little clumps of isolated trees right in the middle of the huge black landscape. 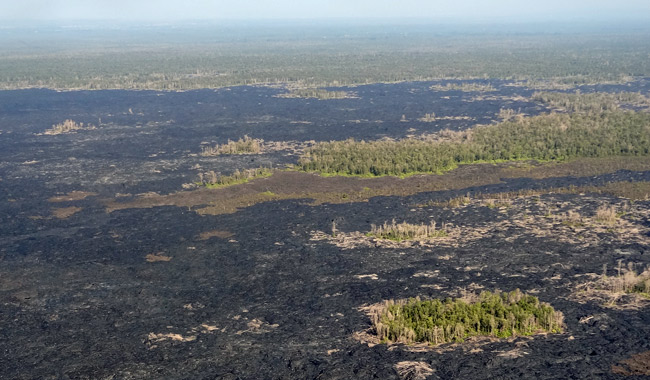 What you’re able to see in terms of actual lava flow depends on the day you fly and the ever-changing activity within the craters. We flew over to a particularly active spot. From here, we were able to peer directly down into the lava pit.

Here, we observed red-hot lava gushing around. This is what we paid to see! 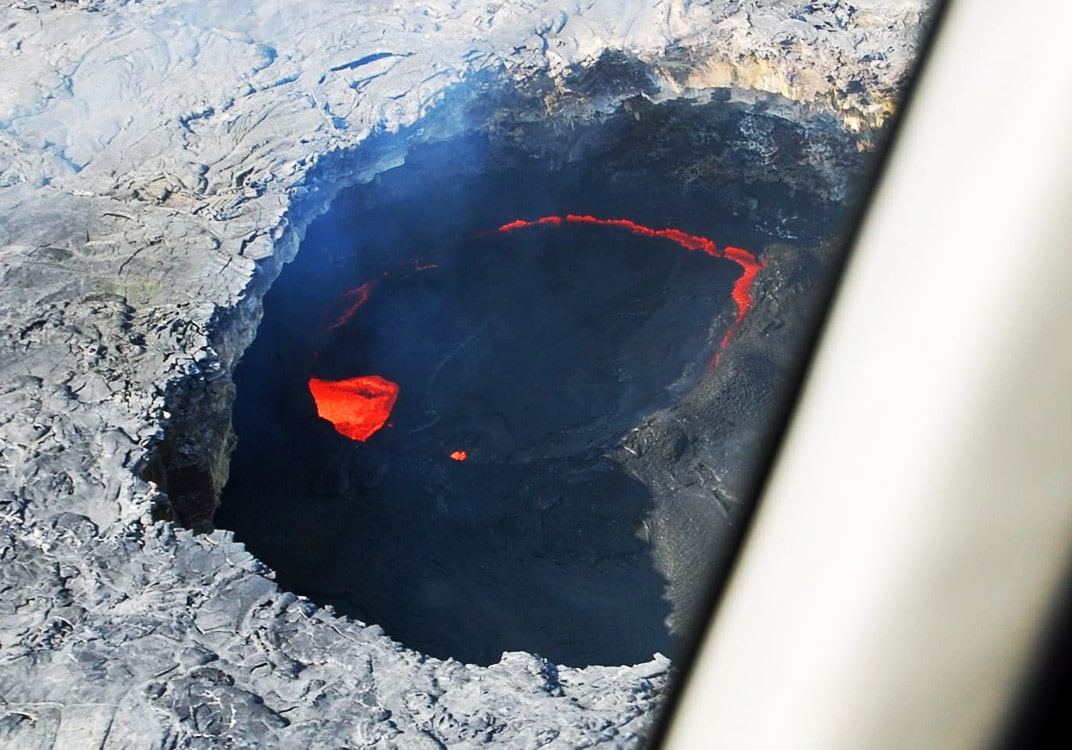 You can see a rim of orange lava around an oval-shaped surface layer. That top layer had turned black after being exposed to the air for a while and cooling, so it was acting sort of like a pudding skin.

The red-hot lava underneath it would emerge periodically from around the eyeball-shaped lava skin.

We lingered at this spot for several minutes to take photos and stare in awe, because how often in life do you get to have a magma sighting? 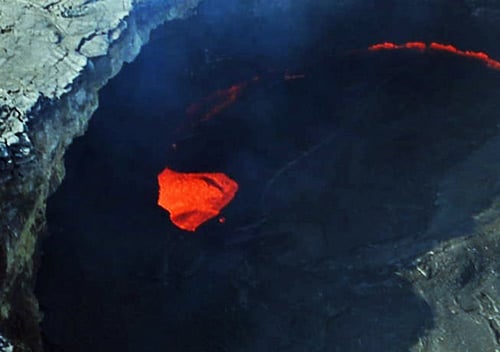 Taking photos from inside a helicopter is somewhat difficult, as you have to wait for the blades and the landing skid to move out of the way. The pilot tends to circle around so that everyone in the chopper get a good view of the lava.

In addition, the glare from the sun on the windows tends to wash out a lot of photos. So I didn’t end up with as many great pics as I’d like. But the ones I did get are pretty sweet.

Eventually, we moved on from the lava, taking in a few other sights near Hilo before returning to the airport. Way off in the distance stood the volcanic peaks of Mauna Kea and Mauna Loa. 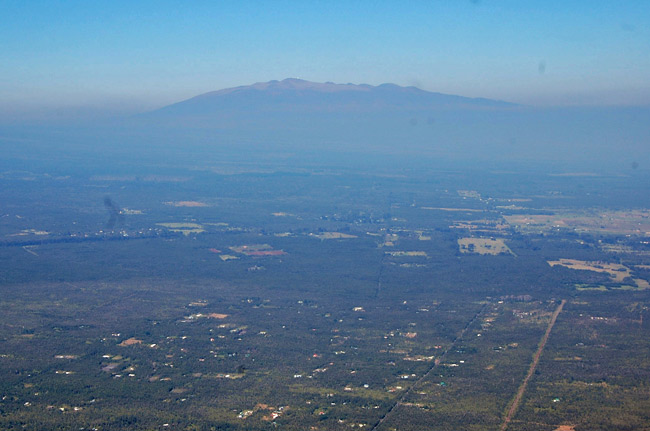 We flew past a series of waterfalls, which looked very cool from the air, as well as a residential area and a little bit of the ocean. 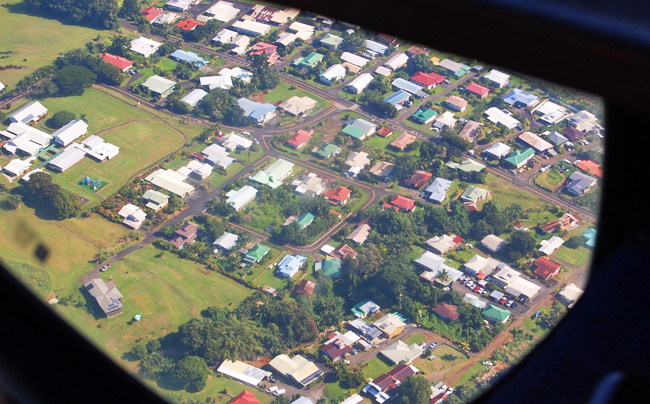 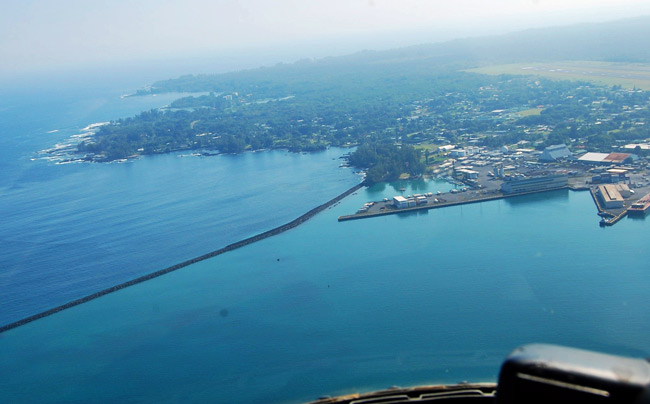 We flew by the town of Pahoa, which was barely spared when a 2014 lava flow stopped just short of town. Being up in a helicopter and seeing how lava has shaped and changed Hawaii was awe-inspiring and really brought home just how powerful lava and volcanoes can be.

These are the most commonly-used helicopter companies on the Big Island (though there are others.)

Paradise. Paradise Helicopters began in 1997 and has desks at both Hilo and Kona airports.

Safari. Safari has been in business since 1987. Their tours mostly leave from Hilo, and tend to be a bit more affordable than Blue Hawaiian.

Blue Hawaiian. This company began in 1985 and is the only company offering tours on four different Hawaiian islands.

Do helicopters ever crash in Hawaii? Yes, on occasion.This is something you’ll have to weigh as you plan your booking. Crashes are infrequent, but in recent years there have been some incidents. Here’s a list of the major accidents, which doesn’t include this recent crash from 2022.

All the major helicopter tour companies have pages on their websites dedicated to the safety measures they have taken to keep pilots and guests safe. When you consider how many flights are taking off every day, this is still a small number of incidents. But it’s understandable that some people may be a little uncomfortable.

If you decide to book a Hawaii volcano helicopter tour, take a good camera, and try to relax and enjoy yourself!

Check out some of our other articles about the Big Island. We’ve written about the museum in Hilo dedicated to tsunamis, hiking to Hawaiian petroglyphs on the Pu’u Loa Trail, the southernmost point in the U.S., and a comparison of Hilo vs. Kona for tourists.