You can tell just from its name that Hawaii Volcanoes National Park is much different from your run of the mill typical national park. Here, it’s all about lava flows, lava rock formations, and lava petroglyphs. Lava, lava, lava!

Cool things to do at Hawaii Volcanoes National Park include viewing an active volcano (from a distance, of course), exploring ancient lava tubes, and exploring the ocean coastline and its amazing natural features.

Here’s a preview of the six activities you’re most likely to take part in when you arrive at Hawaii Volcanoes National Park on Hawaii’s Big Island. Best of all, most of these can be accomplished during a single day in the park! 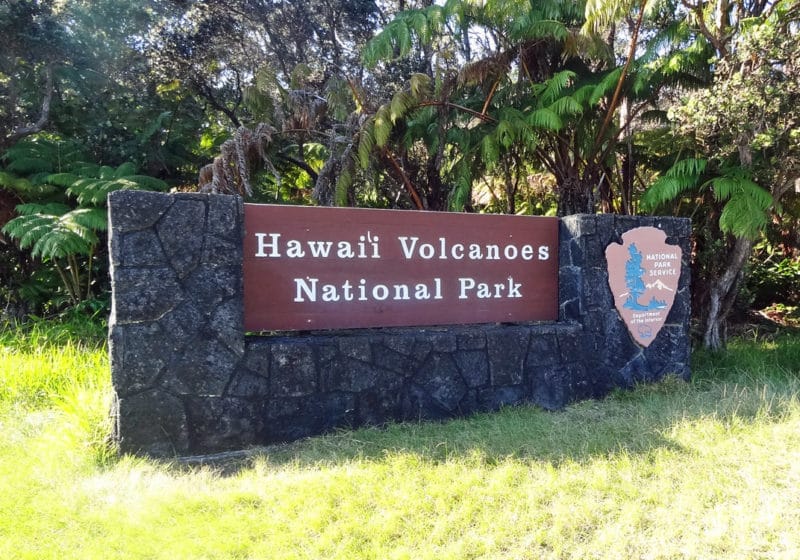 All of these activities can be accomplished during a quick two-day visit. Of course, if you have more time to stay, you can see and do much more!

Crater Rim Drive is an 11-mile loop starting at the park entrance near Kilauea Visitor Center. This road includes a number of spots where you can peer into craters and take in the unusual landscapes created by previous lava flows.

Stop at any pullout to get your first glimpses of the impressive hills, calderas, and foliage. Parts of Crater Rim Drive are often closed due to volcanic activity, so check in at the visitor center to see exactly how far you can go. 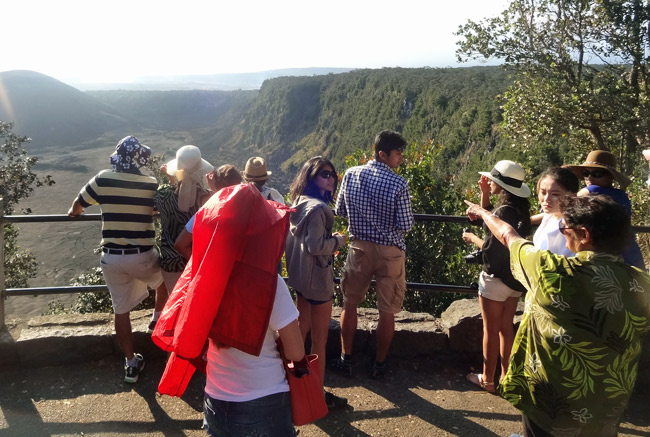 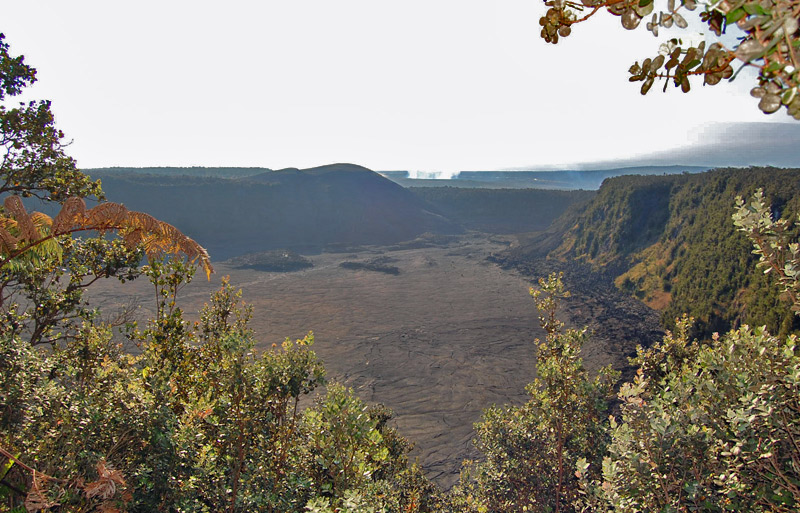 Between the years 1200 and 1450, natives carved roughly 23,000 drawings into the hardened lava at a site known as Pu’u Loa. These petroglyph fields are among the most popular areas of the national park.

A walking trail three-quarters of a mile from the main road leads to the petroglyphs. You can see all sorts of fascinating designs in the lava. Consider Pu’u Loa a must-see when you visit the park. 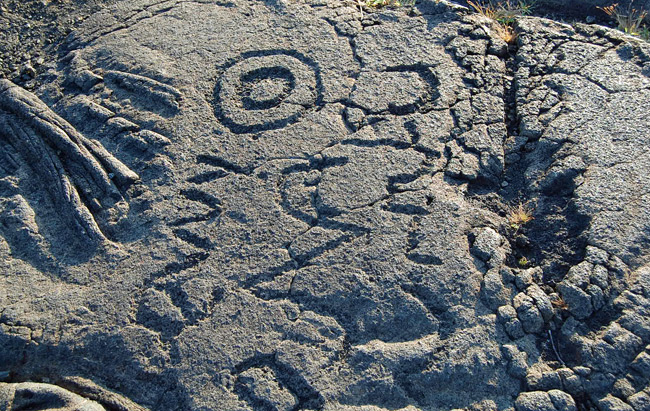 Since the walk is only 0.7 miles round-trip, it’s an easy stroll for just about any visitor. And you’ll get to take in some of the unique history of the people who lived here. 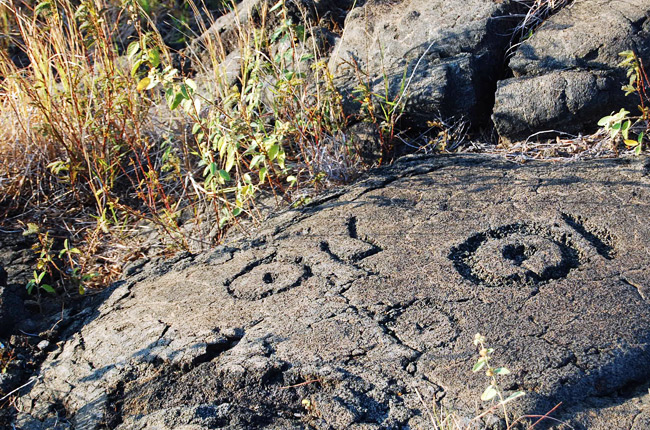 3. View the evening glow of Kilauea Caldera from Jaggar Museum

Kilauea has been continuously erupting since 1983. The best way to view the glow of the molten lava is to take an after-dark visit to Jaggar Museum, located along Crater Rim Drive.

From the popular lookout point there, you’ll easily be able to see the nighttime red-orange glow of Halema’uma’u Crater just one mile away. 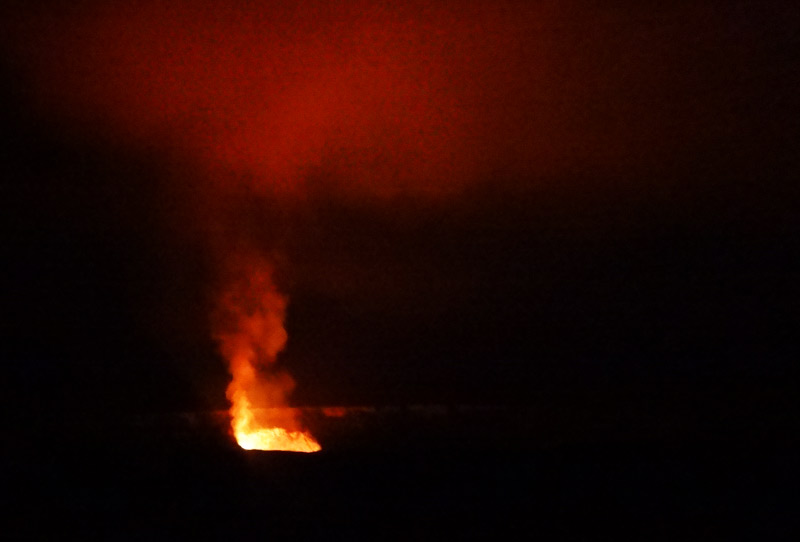 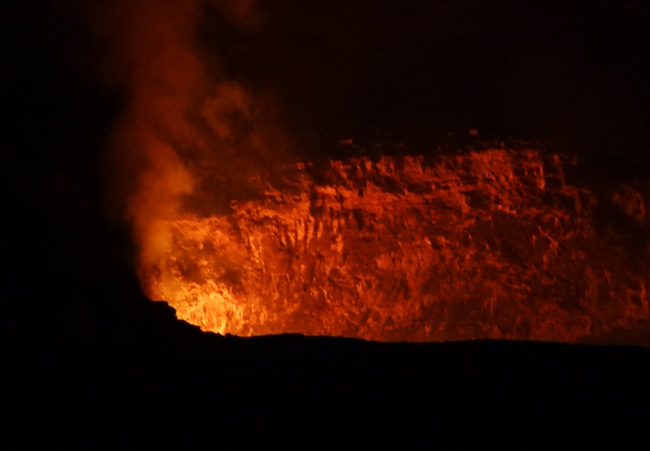 There are very few places in which you can view active volcanoes from this close, so take advantage of the opportunity!

Update: Jaggar Museum has been closed since 2018, when a new months-long eruption of Kilauea damaged the facility. The ledge on which the museum sits has been declared “extremely unstable.” At this moment, it is unclear whether the museum will ever reopen.

At the very end of Chain of Craters Road is the famous Holei Sea Arch. The lava here arrived during a lava flow 550 years ago, and the arch itself was formed by the water within the last 100 years. 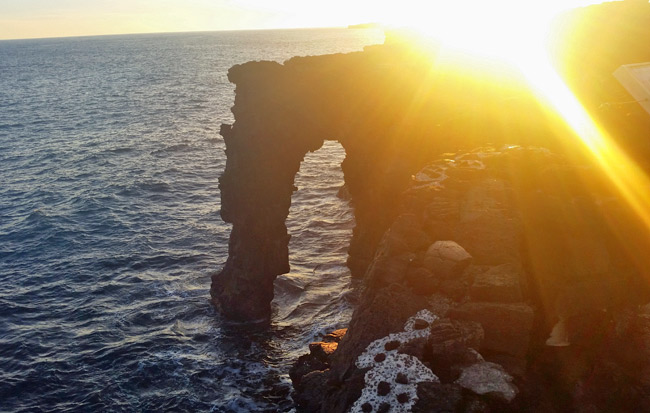 The arch is 90 feet high and looks especially impressive at sunset with the sun behind it. You can walk right up to the arch, but beware.

The National Park Service has posted signs warning visitors that eventually, the arch is going to crumble into the ocean. You probably don’t want to be standing on top of it when it does.

One of the coolest things to do at Hawaii Volcanoes National Park isn’t listed on the park’s brochures or online guides, so listen up for an awesome photo opportunity!

On Chain of Craters Road, a few miles before reaching the petroglyphs, keep an eye open for a side road partially covered by hardened lava.

Alanui Kahiko means “old road.” This used to be Highway 130, the main road through the park, but a 1972 eruption buried around 10 miles of the road. Only small portions of it remained uncovered by lava. 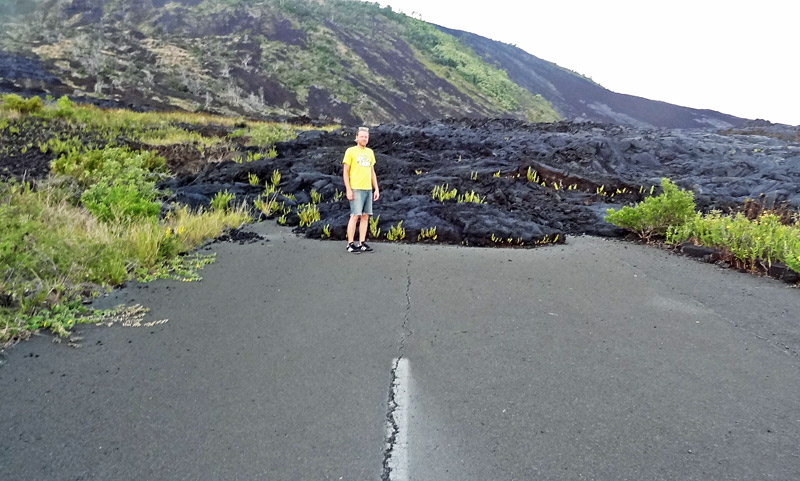 Discovered in 1911, Thurston Lava Tube is a cave-like structure that used to house a lava river hundreds of years ago. Walk from the nearby parking area through a fern forest and into the tube. Give yourself at least 20-30 minutes. 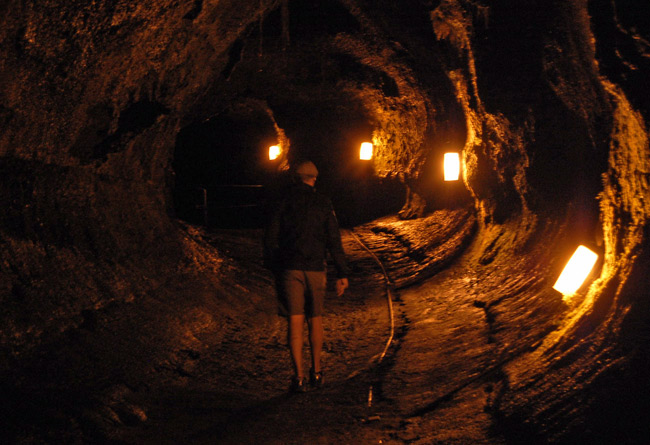 I highly recommend doing the Lava Tube during the day. We did it at night on the way back from Holei Sea Arch, and that was a bad idea.

The walk from the car to the tube was pitch black with almost no lights and a path that was difficult to follow. During the day this would not be an issue at all.

Other Things To Do at Hawaii Volcanoes National Park

There’s plenty more to do in Volcanoes National Park if you have a few extra days. You can claim a spot at one of the park’s campgrounds, or partake in more extensive hikes (be careful of the afternoon heat!)

Start off by popping in to Kilauea Visitor Center. Here you can get park maps, speak with rangers, pick up souvenirs, and plan your itinerary. As of 2023, the center is open 9 am to 8 pm everyday, including holidays.

If you’re really motivated, you can hike to the actual summit of Mauna Loa! It’s more than 6 miles each way to the 13,678-foot summit, so this is not an easy hike for the casual tourist.

And you can also see the park from above via helicopter! Various copter rides depart from Hilo or Kona and take passengers over active lava flows on the island. Read about my Big Island helicopter ride experience.

Hawaii Volcanoes National Park was established back in 1916, way before Hawaii even became a state! The park is open 24 hours a day, year-round. Current admission price is $30 per vehicle, and that gives you a pass good for 7 days.

While you’re on the Big Island, make sure to check out many of the other cool activities there, including the Pacific Tsunami Museum in Hilo and the real southernmost point in the United States. If you’re wondering which city to spend the most time in, check out our Hilo vs. Kona guide.

And if you happen to make it over to Oahu, read about our guides to Koko Crater, Pearl Harbor, the Dole Plantation, and cage diving with sharks.