“It’s not that far!,” I convince myself as I look up from the trailhead to the Koko Crater Trail summit. I know the hike is a little less than a mile each way, and it doesn’t look that intimidating.

But staircase height can often be deceiving. Especially if the stairs consist of more than 1048 steps held down by railroad ties going up the side of a volcanic crater.

The Koko Crater (or Koko Head) hike outside Honolulu, Hawaii is one of Oahu’s most popular hikes, and for good reason. The views at the top are incredible. But getting there is way more difficult than it looks. 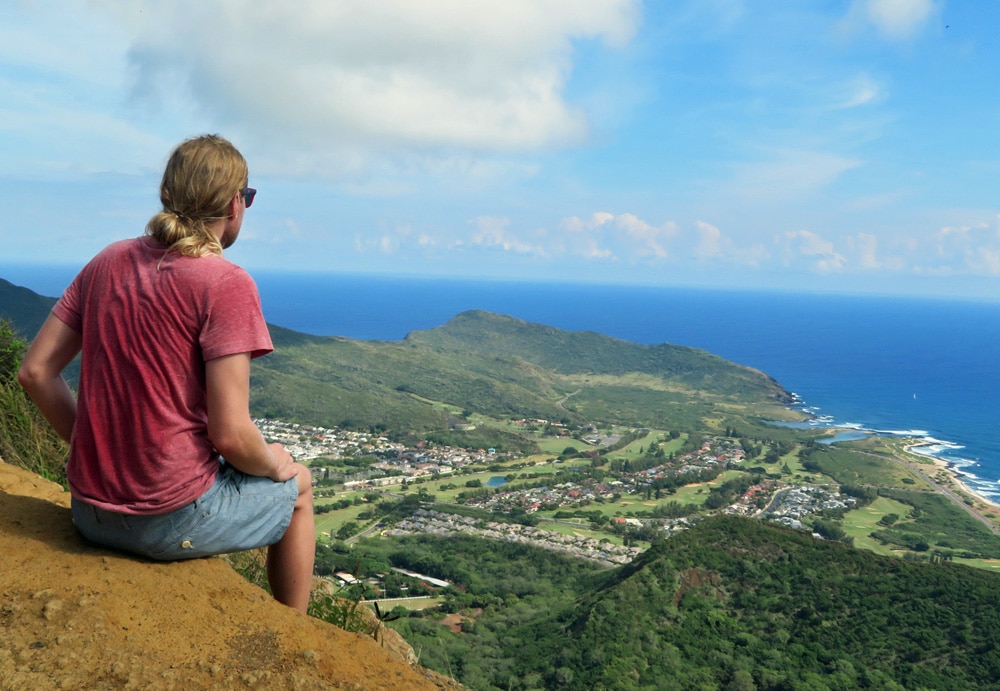 Koko Crater is one of the coolest and most rewarding hikes I’ve ever done. How often do you get to hike straight up? 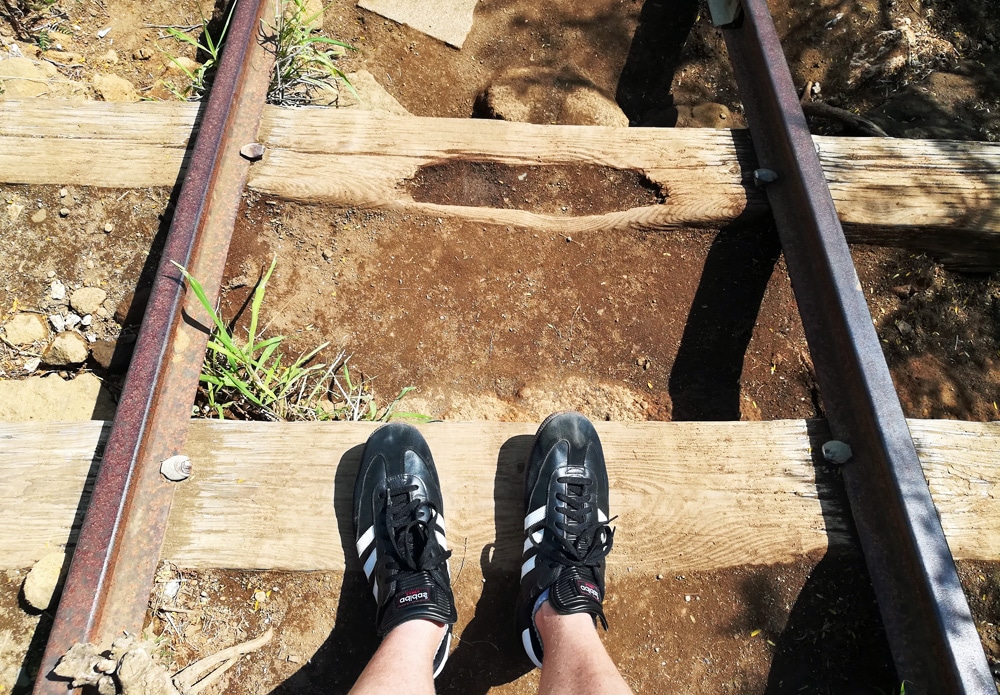 The key to enjoying the Koko Crater hike is going in the morning before the sun gets too hot. If you go during the middle of the day, as I did, you’ll need to take several rest breaks along the way.

The trail is actually a former railway that was used to transport supplies to a 1940s-era outpost at the top of the mountain. With Pearl Harbor not far away, the military smartly wanted to have a lookout station atop this crater. 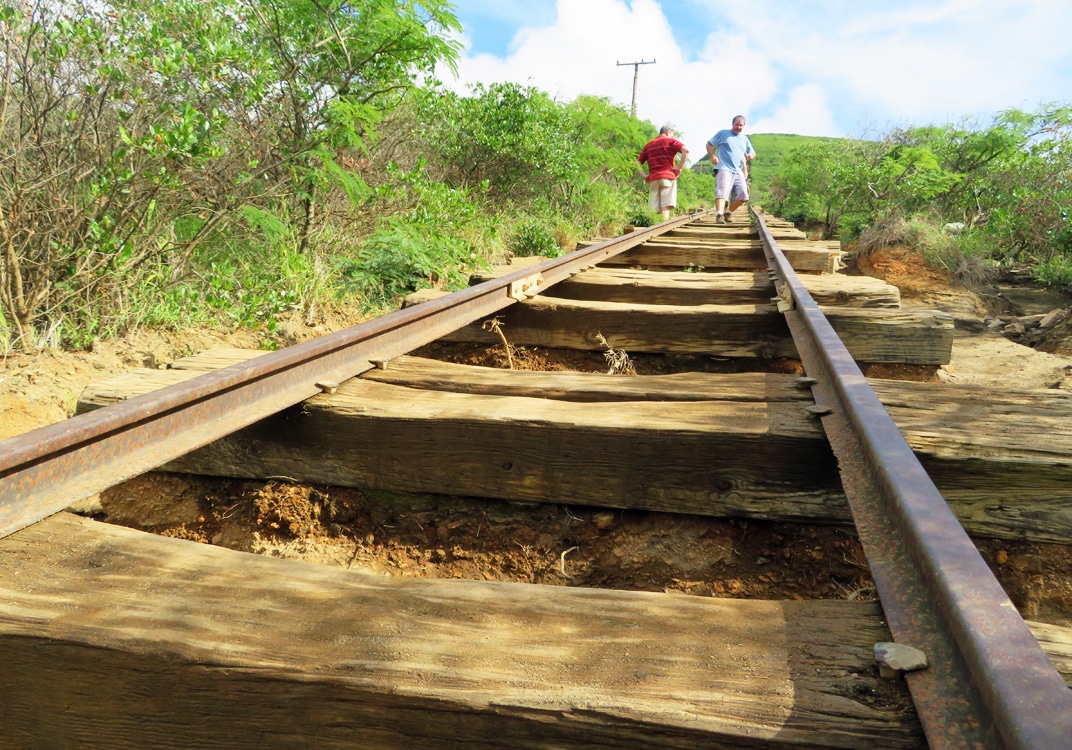 These days, the railway is used only as a hiking trail, and hundreds of outdoorsy folks use it everyday. The crowd ranges from athletes who run up and down the trail, to out-of-shape tourists who give the hike a try because they read about it on Trip Advisor.

Expect the trail to be crowded no matter when you arrive.

Details About the Koko Head Hike

After a short walk from the free parking lot nearby, you’ll arrive at the bottom of the trail. Looking up, the dozens of folks on the trail look like ants from this distance.

And then the climbing starts, and it quickly becomes apparent that scaling this hill will be more difficult than it initially appeared.

The good news is that the hike is doable for the average person, as long as you drink plenty of water and take frequent rest breaks. 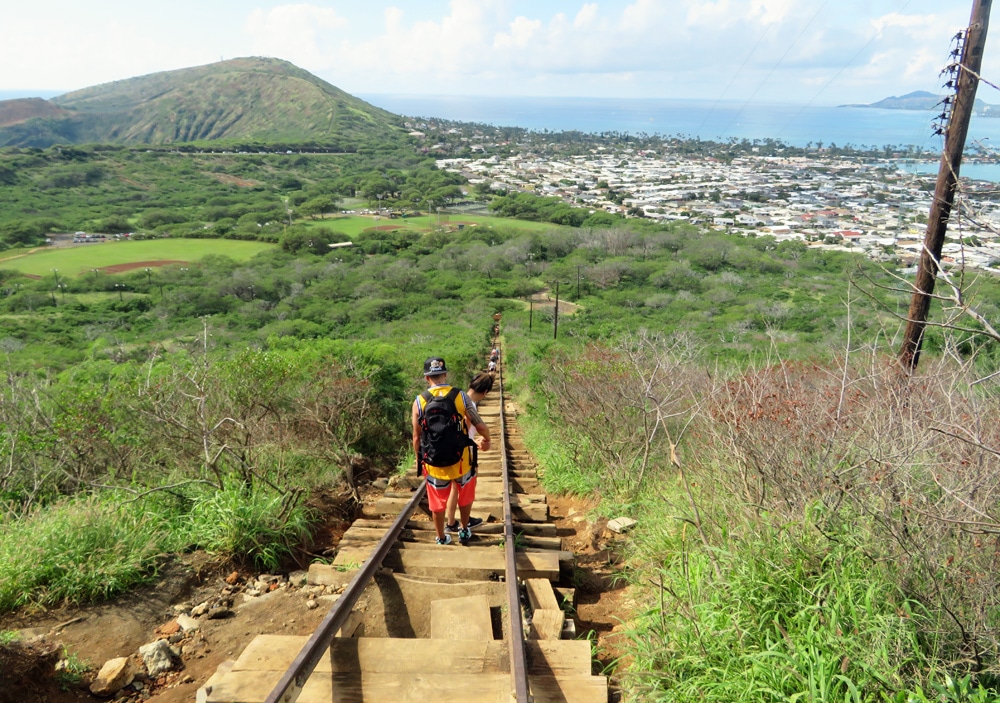 Shade is minimal, but you can catch a bit of relief from the sun under some of the small trees halfway up the hill.

The coolest – or scariest – part of the trail comes about halfway up. There’s a small section where there is no ground beneath the railway, so you have to watch your step or risk falling through the track.

It isn’t especially hard to traverse this section, but it might make some people uncomfortable.

RELATED READING: Quirky Things To See and Do in Oahu

If that’s the case, you can avoid this part of the Koko Head stairs by finding the short dirt trail on the right side of the track and following it for a couple minutes until it reconnects with the railway further up the hill.

Eventually, if you persevere enough, you will reach the summit, where you can risk your life by balancing precariously on old wooden beams. 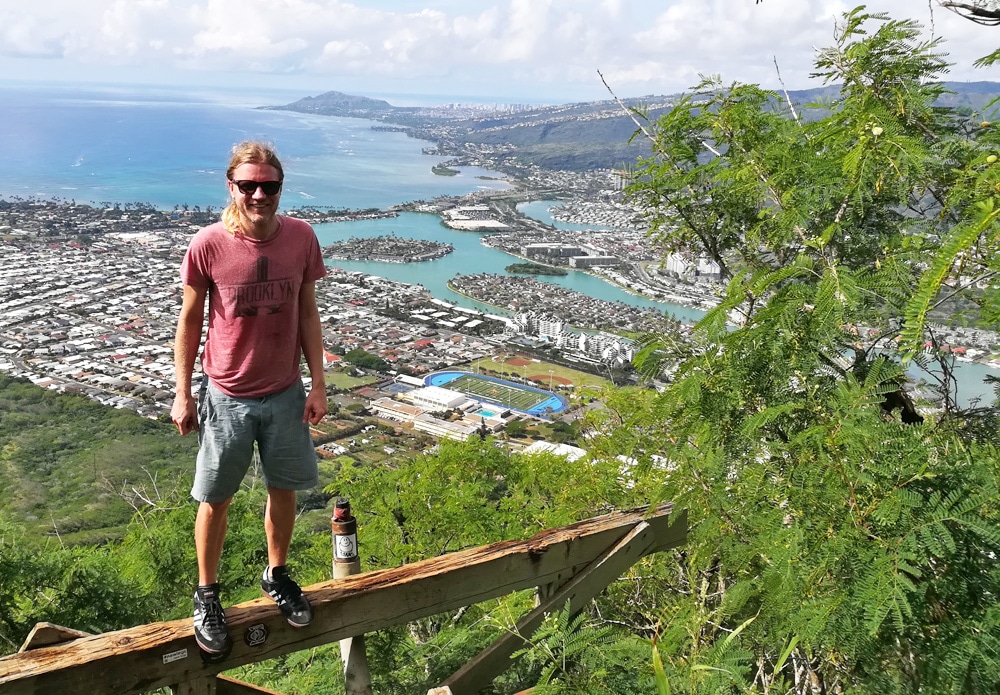 The actual Koko Crater Trail length is less than one mile each way. However, when you factor in the walk from the parking lot, you’re looking at close to 1.4 miles each way. The elevation gain is about 1000 feet.

How long does it take to hike Koko Head? From the parking lot, give yourself at least 30-45 minutes to get to the top.

Fit individuals may not take that long, but chances are you’ll want to take several breaks to rest, drink water, soak in the views, and take photos. You’ll also want to spend time hanging out at the summit. 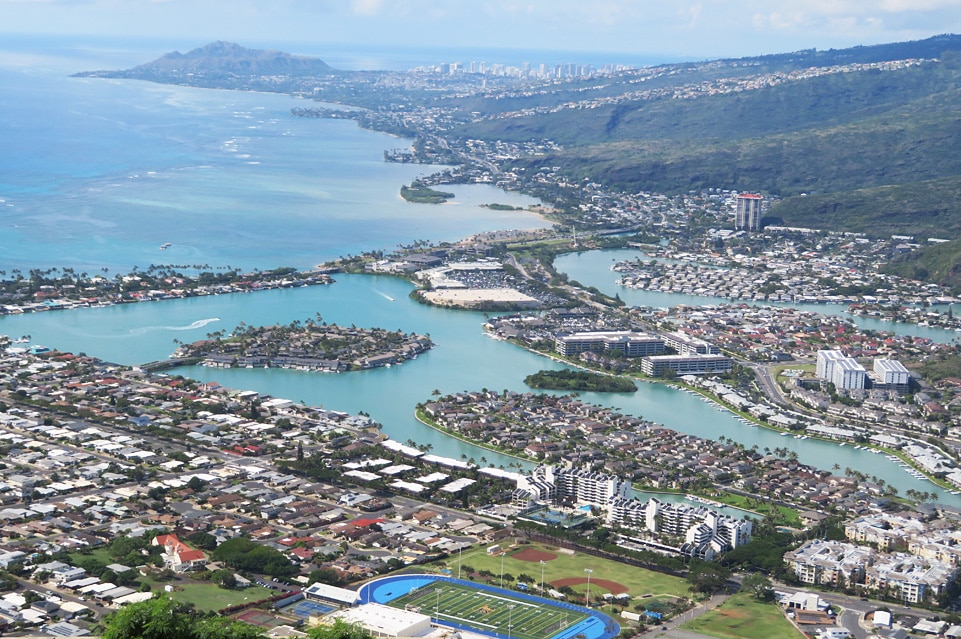 These views are cool! You’ll see neighborhoods and Little League fields and the Honolulu skyline. You’ll see Hanauma Bay, one of the best spots in the area for snorkeling.

You can look down in the direction of Lanai Lookout, a nearby spot along the water where President Obama spread the ashes of his mother and grandmother. 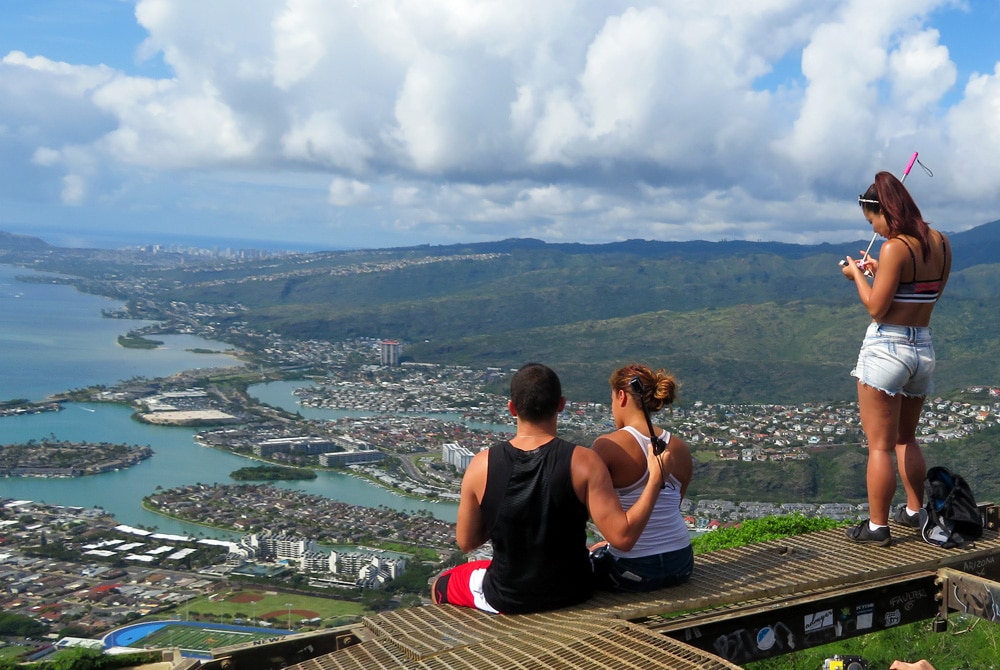 Remember to save some energy for the trek back down! The Koko Head hike in Oahu is exhausting but really rewarding.

So don’t be afraid to give the Koko Crater Trail a shot even if you’re not usually a big hiker. Just bring lots of water!

Directions to Koko Head: How To Get to the Trail

From Honolulu, it’s not hard to figure out how to get to the Koko Head Trail. You follow H1 / Route 72 to the southeastern corner of the island.

The highway becomes a two-lane road and continues right to the park. It’s a 12-mile drive and will take less than 30 minutes unless traffic is heavy. 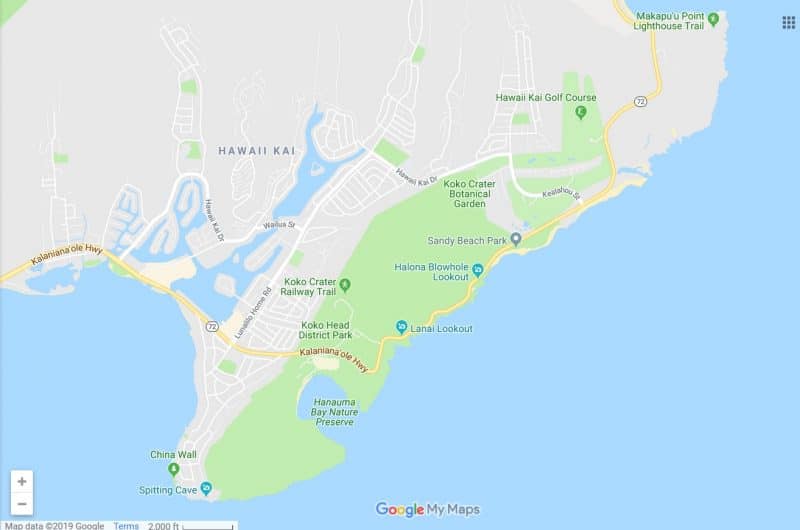 Look for signs for Koko Head Park, and you’ll find the road that leads to the parking lot. There’s also a Koko Head Botanical Garden in the area, near Sandy Beach Park.

Parking won’t be a problem if you arrive early in the day.

Unlike the Big Island, which has Hawaii Volcanoes National Park, the island of Oahu doesn’t have any national parks. So visitors have to dig a little deeper to find great hikes.

The Koko Head hike is one of the best within short driving distance of Honolulu, so give it a shot if you’re up for the challenge! And don’t pass up the chance to stop here if you’re on a driving road trip of the island. 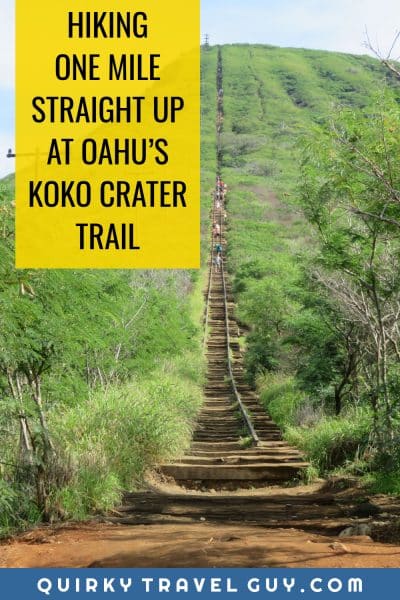