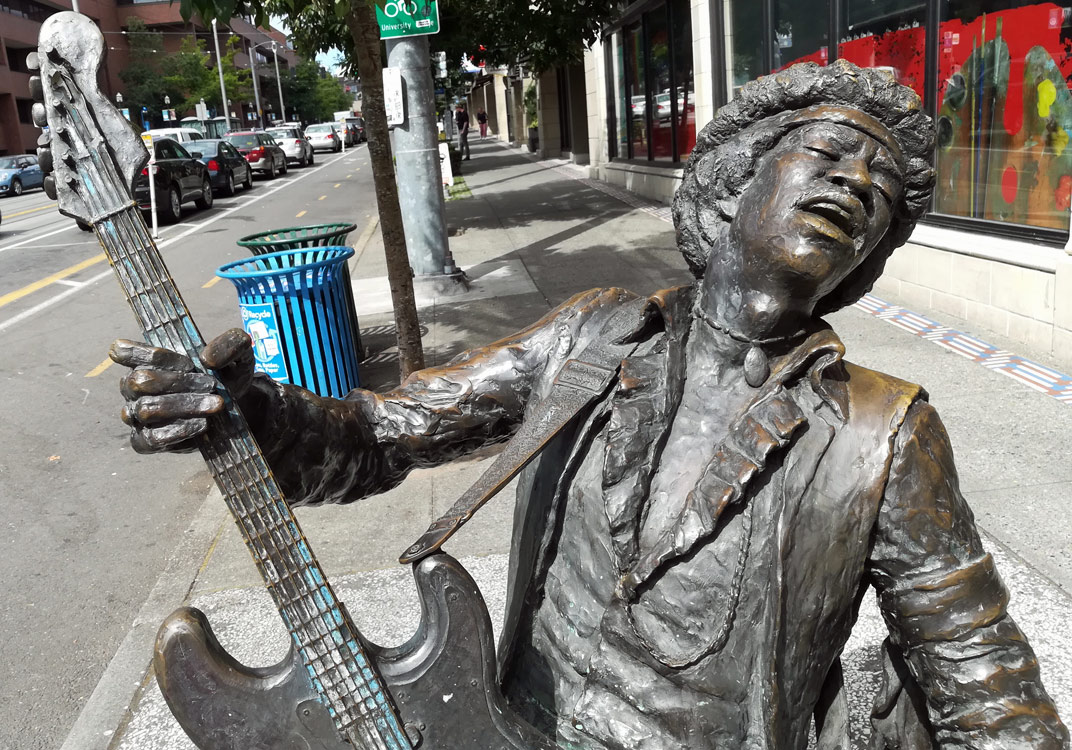 This week’s quirky attraction is simple, but it’s awesome. In the Capitol Hill neighborhood of Seattle stands a statue of guitar god Jimi Hendrix. Unveiled in 1997, the bronze likeness shows Hendrix on his knees shredding on his guitar.

The Hendrix statue was created by local artist Daryl Smith based on photos from the 1967 Monterey Pop Festival. Want to visit? The address is 900 E. Pine Street.

It’s right in the heart of Capitol Hill, which is one of the trendiest and most vibrant neighborhoods in Seattle. It stands on the corner of a block in front of an art supplies store.

This is a very busy neighborhood, so if you stop by for a selfie, expect lots of other folks to be passing by on the sidewalk. But you should be able to get a good photo without too many other people in the background.

As statues go, this one is really good. It’s very accurate and gets the face right, something that many statues fail to do.

The statue is often covered with various articles of clothing, like a necktie or Christmas decorations. Leave it to the good folks of Capitol Hill to ensure that Jimi’s fashion changes with the times.

The statue isn’t the only Hendrix-related attraction in the Seattle area. You can also visit his grave, a park named in his honor, and a museum with exhibits about his career. Read on!

Hendrix is a Seattle native, which explains why the locals honored him in this manner. (How long until we get a Kurt Cobain statue?)

There’s also a Jimi Hendrix Park in Seattle which, strangely, is not located near the statue. Some folks have suggested moving the statue over there, but so far it has remained in its original home.

Jimi Hendrix Park is located next to the Northwest African American Museum. It’s on the cusp of the Beacon Hill and Central District neighborhoods.

The park has a purple guitar art piece and Jimi’s enlarged signature in the concrete. It’s a busy park with lots of pedestrians and joggers passing through.

Is there a Jimi Hendrix Museum in Seattle? No, not right now. MOPOP, the Museum of Pop Culture, was originally a Hendrix Museum. It has since expanded to feature pop culture of all kinds.

MOPOP still has a collection of 6000 Hendrix-related items, and many remain on display. Find the museum right next to the Space Needle. I visited recently and MOPOP still had an entire Hendrix room.

Display items included the guitar he played at Woodstock, a wall full of concert posters from the ’60s, and even his actual passport.

Hopefully someday there will in fact be a Hendrix museum, because he’s an icon and it would be great to have a large collection of memorabilia and artifacts.

That’s about a 25-30 minute drive from the Hendrix statue in Capitol Hill, if there’s no traffic. The grave site has a pretty impressive grave stone. The true Hendrix fan may want to make the trek out there. 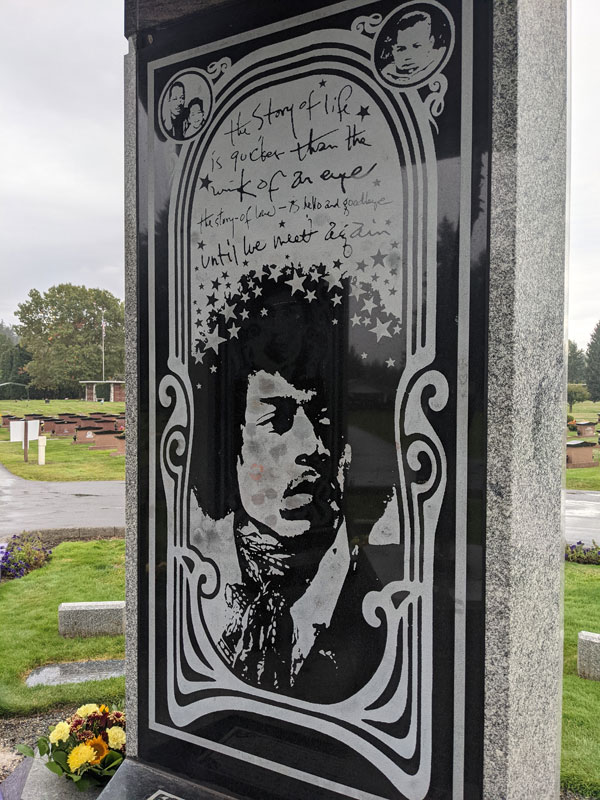 As for the Hendrix Seattle home, well, Jimi’s childhood house (on 4th Ave. in Renton) was torn down in 2009 so you won’t be able to visit. A developer had bought the house with the goal of moving it near the cemetery.

He actually had it transported to a nearby mobile home park, but his plans for a Hendrix museum there fell through, and the house was removed and taken to parts unknown.

Unfortunately, there isn’t a Hendrix tour in Seattle either. The closest thing you may find is a Rock & Roll Tour or the Seattle Highlights Sightseeing Tour through Viator.

And while you’re in town don’t forget to stop by the Gum Wall near Pike Place Market!

A few more facts about the man, for those who may not be aware. Hendrix’s birthday was November 27. He was born in 1942 and died in London, England in September 1970. 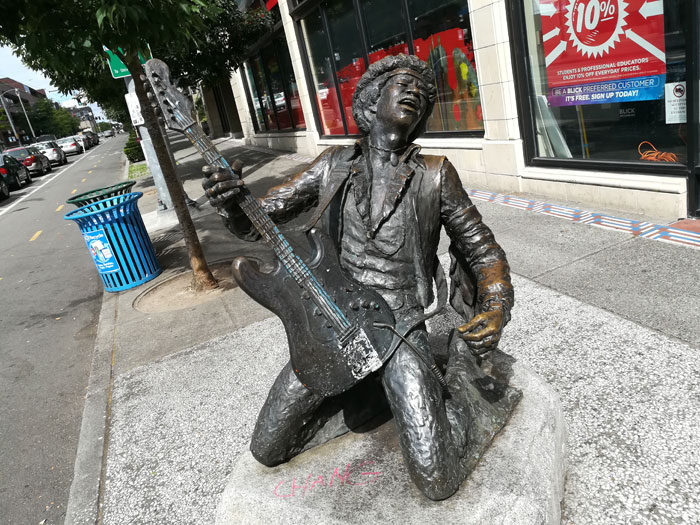 How did Jimi Hendrix die? The details are somewhat vague. Officially, he was intoxicated with barbiturates, causing him to aspirate on his own vomit and die of asphyxia.

Some folks have found the circumstances of his death suspicious. In 1992, authorities considered reopening the case, but decided there wasn’t sufficient evidence to proceed with an investigation.

Hendrix is still regarded by many as the greatest guitarist of all-time. Among his numerous awards and accomplishments, Hendrix was given a star on the Hollywood Walk of Fame, and another on the Music City Walk of Fame in Nashville.

What are your favorite Jimi Hendrix songs? His biggest hits, of course, included “Purple Haze,” “Hey Joe,” and “Foxy Lady,” plus his incredible rendition of the Star-Spangled Banner played entirely on electric guitar.